The irruption of visiting sportsmen in Gulmarg is a brief interlude. Since last August, it has lain in snowy silence, to which it is fated to return. 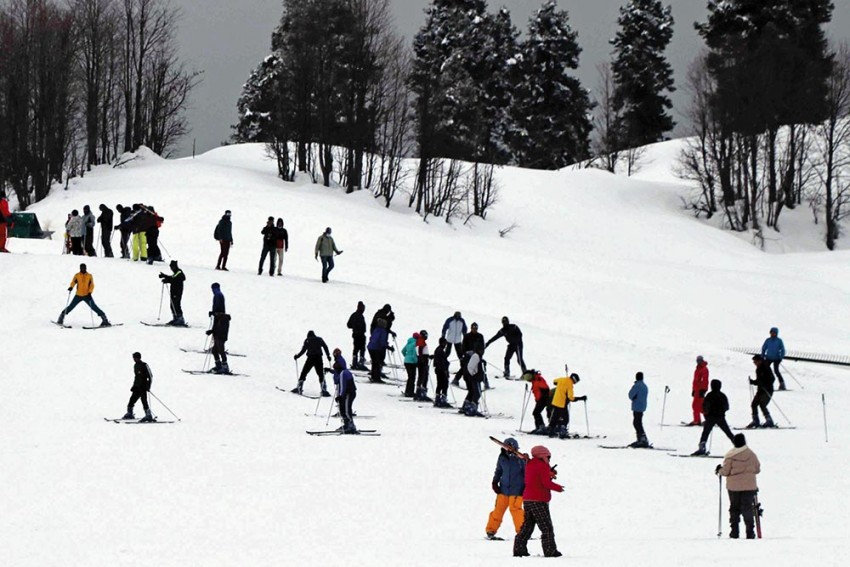 A mountain town boarded up for the winter, imprisoned in its icy whiteness for months—that’s what the Kashmiri ski resort of Gulmarg resembles this season.

Kolahoi Green is a four-star hotel, just 20 metres from the Gondola cable car. The hotel was closed in August 2019 after the government asked tourists and pilgrims to leave the Valley. “We closed the hotel in August. It rem­ained closed for five months,” says manager Hamid Masoodi. Gulmarg saw a steep fall in tourist arrivals this winter, he says. However, spring arri­ved suddenly, on the wings of a government-organised marquee event.

Thirty of the hotel’s 37 rooms were booked on March 7—around 900 players, over 100 journalists and scores of officials descended on Gulmarg to participate in the five-day long, first winter games chapter of Khelo India here. Despite calls from civil society to postpone it at a time when schools are closed due to the coronavirus scare, the government went against its own advisory against large gatherings. Many here see the move to hold the Khelo India event as an effort to project normality in Kashmir after the long lockdown.

Yet, the event that brought life back to Gulmarg denotes a momentary relief from the awful emptiness. Masoodi fears coronavirus would hit the beleaguered tourism sector further, wrapping Gulmarg once more in a ghostly shroud.

The hardest hit, of course, are people who make a living out of tourism. On a recent Sunday, tourist guide Showkat Ahmad Wani, 50, approaches visitors, off­ering his services, only to find that they are locals. Stepping back, Wani rej­oins his colleague Far­ooq Ahmad Katariya. “I have been a tourist guide for the past 20 years. I haven’t seen such a bad season ever,” says Wani. He says that on Sundays Kashmiri youngsters visit Gulmarg and go for basic skiing. “The rest of the week you won’t find a soul,” says Wani. Hotels, open after the long closure, are scarcely occupied. “Some hotels in Gulmarg started opening on new year’s eve; others opened on February 1. But if you have one room booked in a hotel it doesn’t mean it is open,” says Sajad Makai, owner of Rosewood hotel. 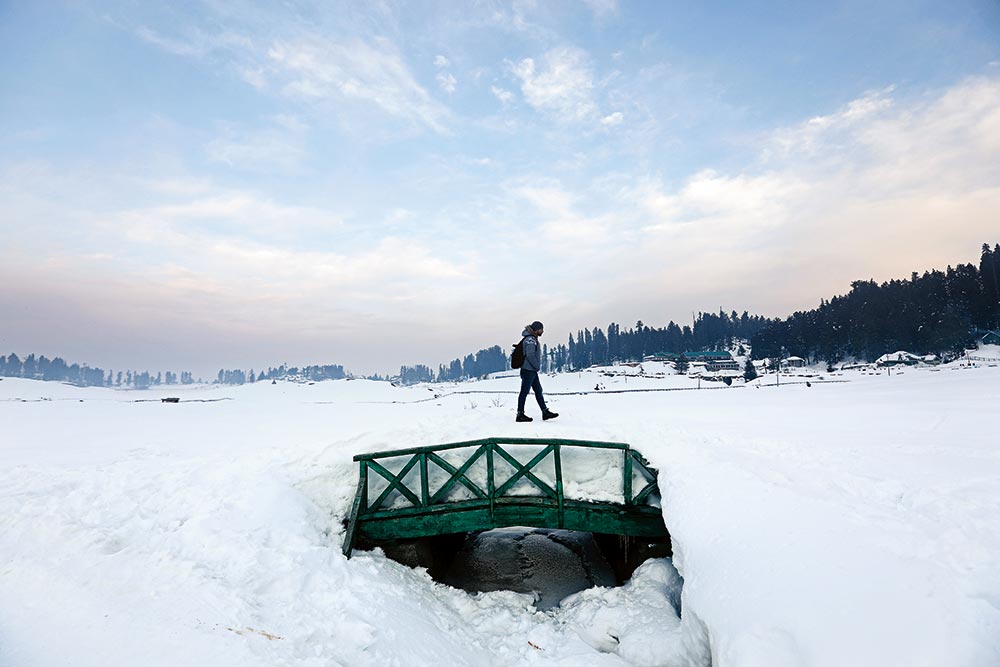 A solitary tourist trudges on a snow-stuffed bridge.

It all started with the government-ord­ered clearance before the abr­ogation of Article 370—on August 2, 2019, tourists and pilgrims were ordered to leave the Valley. “The police and security agencies ensured that not a single tourist stayed back. The order created panic and it pained us to see them leaving Gulmarg like refugees,” Wani says. Hoteliers recall how the police, accompanied by tourism officials, knocked hotel rooms at midnight, asking guests to leave.

Gulmarg’s guides and sledge drivers have been without work since August, when the town was cleared.

The dams broke on August 5, 2019—a communication blockade, security siege and the arrest of thousands. The government did subseq­ue­ntly ease restrictions and res­­umed mobile and limited internet services, but tour operators say the communication blockade destroyed Kashmir tourism. In August 2019, this correspondent found Gulmarg a deserted town—hotels were closed, streets empty, but for hungry strays picking at scraps. The situation has improved since then—hotels are open and skiers have started trickling in.

Wani, like other 800 tourist guides, left Gulmarg in August and stayed at home till December. “Occasionally, I used to come to Gulmarg. I saw no one here. It was a ghost town,” says Farooq, who is from Baramulla. Now, while the guides have returned, tourists are not showing up in Gulmarg, which is covered in thick snow, ideal for skiing and toboganning.

Near the cluster of guides, a group of men sit on their wooden sledges. The wait for customers drags on. “There is no work here,” says Irshad Ahmad Mir, a sledge driver. Mir says they have ret­urned to Gulmark in the past few weeks. “You have to wait for days altogether to get a customer,” he says hopelessly. Abdul Hamid Mir, 50, who heads Rahat Pony and Sledge Association of Gulmarg shares Mir’s disappointment. “Tell me how many tourists are there,” asks Mir with an expansive gesture. “What you see are some Kashmiri students. That’s all,” Mir says the 3,200 members of his association have been jobless since last August—the common refrain in Gulmarg. “When the government orde­red tourists and pilgrims out of Kashmir, we also left. I went to my home in Tangmarg. Even vehicles were not plying on Gulmarg’s roads. I thought grass would grow on the roads,” he laughs. Irrespective of the few tourists, Mir is worried about the future.

Taj Irshad, 32, is a ski guide. He, too, is filled with foreboding. Taj came to Gulmarg from Baba Reshi in 1995 for ski training and has stayed back. He is a competitive skier, a ski guide and runs his own off-road company, Kashmir Great Lakes. “Gulmarg, with so much snow, should have been a happening place this winter. In past years, you’d have seen foreigners, tourists from different states and politicians, including Omar Abdullah, here. Abdullah is a mountain skier, and would always rem­ain in queue and wait for his turn. It is all gone now,” he says wistfully. “Even hotel staff from Jammu was asked to leave on August 2. It was a poignant moment. I saw a foreign tourist crying…in the middle of night, they asked her to leave. What else she could have done?”

After waiting out a few days into the lockdown to see if the situation imp­roves, Irshad left for Mumbai. “I thought it would help me to remain in touch with my clients. Many cancelled their tickets, some left for their countries after they were not allowed to visit Kashmir from New Delhi,” he says. “In these winter months I used to earn around Rs 5 to 6 lakh. At season’s close, we haven’t even earned Rs 50,000 so far,” he adds. This year, says Irshad, the government didn’t allow heli-skiing and closed the second phase of the gondola (the ropeway) for long. “Such decisions also hamper tourist arrival,” he adds. 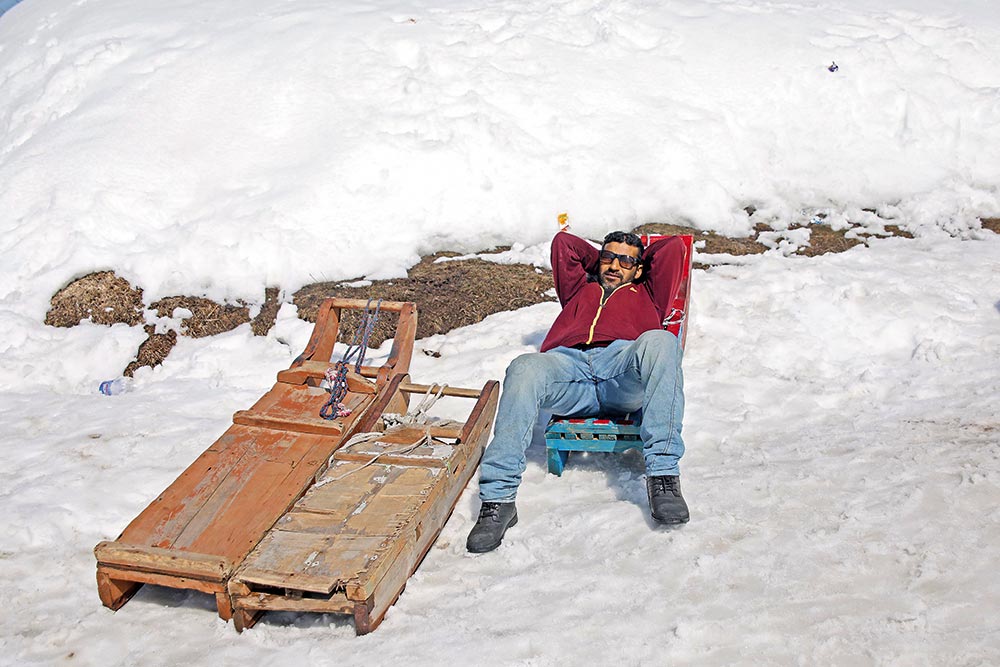 The second stretch of the gondola, from Kongdoori to Apharwat, takes skiers to a height of 3,979 ft. From there, it allows them downhill ski runs of about 5 km. This phase, used mostly by professionals, was closed till January 2020. Sources say for want of explosives the second phased remai­ned close for long. The government also imposed a ban on explosives—used for triggering avalanches in ski resorts to make slopes danger-free.

Wooden sledges lie unused beside owners. Some guides spent time in Mumbai to remain in touch with clients.

Tourist guide Irfan-ul-Rehman, 25, was staying at a hotel here when the government asked tourists to leave the Valley. “The order was like a sudden cardiac arrest for us. One of by one, guests started leaving. I also left on August 4. The hotel’s 35 employees also left and it remained closed for the next five months,” Rehman says. Tall and good-looking, Rehman didn’t opt for government employment after his post-graduation in Economics from the University of Kashmir. Instead, he preferred to be a tourist and ski guide at Gulmarg. “I am from Tangmarg and I found this work adventurous, though we don’t see any tourists around,” he says with a smile. He, too, left for Mumbai to remain in touch with his clients. “After a few months when I ret­urned to Gulmarg I found it as dese­rted as it was in August, as it is now. It pains me,” he says. Indeed, as if in an echo, each amplifies the other’s voice: there is no work, say guides and sledge drivers; there are no customers, repeat owners of the 40 hotels in Gulm­arg. The utter dereliction in Gulmarg in those months is effectively, and chillingly, portrayed by what a hotelier saw in late summer: stray dogs moving out in packs from Gulmarg, on their way to Tangmarg. “As all hotels were closed, they had no food.”

At the tourist information Centre in Gulmarg, an official, Nisar Ahmad Dar, speaks of the oppressively hushed silence that wrapped Gulmarg when all hotels rem­ained closed for six months. “Now, the government has revoked its order and hotels have opened,” he says. The number of foreigners who visited Gulmarg this season, he reckons, might be around 25 to 40 (down from an average of 500). Flipping pages of tourist information brochures, he nonchalantly says, “We expect a good tourist rush in the winter season.” Most of that season has passed, and his note of hope strikes a discordant air. It is refreshing, nonetheless.

By Naseer Ganai in Gulmarg