A Rajput in charge of JD(U), another in charge of RJD, a Brahmin at the helm in Congress. What exactly is brewing in the homeland of Mandal and OBC politics? 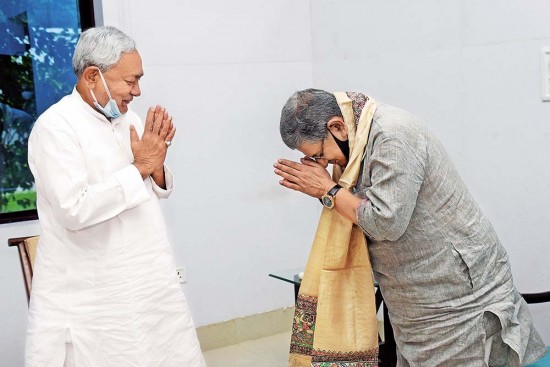 Ignored for long by OBC-centric parties during the post-Mandal era, privileged-caste leaders appear to be back in circulation in Bihar. A Bhumihar MP, Rajiv Ranjan Singh aka Lalan Singh (in pic with CM Nitish Kumar), has become the first privileged-caste leader to be appointed national president of the ruling JD(U). Lalan was chosen even though former Union minister Upendra Kushwaha—an OBC leader from the Koeri caste, who had merged his Rashtriya Lok Samata Dal earlier this year with JD(U) and was made its parliamentary board chairman—was widely tipped to replace R.C.P. Singh as the national president. Political observers believe Nitish made the decision because Lalan was pipped to the post by RCP in the race for the solitary berth given to JD(U) in the Narendra Modi government. Lalan’s supporters had apparently blamed RCP, a Kurmi like Nitish, for the denial of ministerial berth to their leader. RCP is now Union minister for steel.

Kurmi and Koeri, the two dominant OBC castes called the ‘Luv-Kush of Bihar politics’, had joined forces to lend support to Nitish in his bid to dislodge Lalu Prasad Yadav’s RJD government from power in 2005. Nitish was expected to hand over the party’s baton to Kushwaha to consolidate his base in the two communities. But that was not to be. Lalan was elevated to the post despite the fact that Bhumihars have been known to be die-hard BJP suppo­rters, especially during the Nitish era.