Years after the ‘Kashmiriyat’ talks, the NIA grills Hurriyat 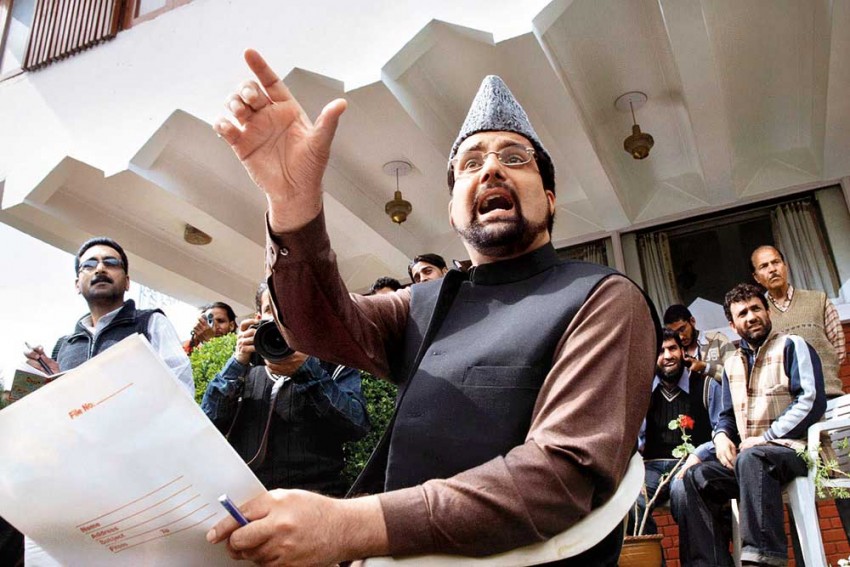 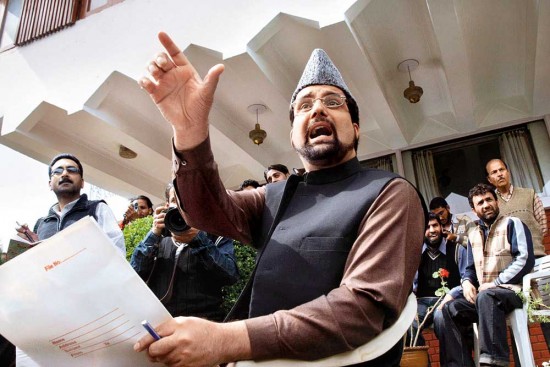 History repeats itself through starkly changing contexts. Take April 8 for instance, when Hurr­iat Conference chairman Mirwaiz Umar Farooq, accompanied by other separatist leaders, made a trip to Delhi to take questions from the NIA in connection with a case related to all­eged funding of terror groups. The same team, more or less, had made ano­ther Delhi trip way back in 2004, under a wholly different political climate—to discuss with the Vajpayee government possible peace solutions for Kashmir. That meeting made front page news. The recent interrogation is pushed to the background, as election campaigning intensifies in J&K. So is the recent arr­est of JKLF leader ­Mohammad Yasin Malik.

Before leaving for New Delhi, Mirwaiz had said that in spite of the “harassment”, Hurriyat will continue to seek a peaceful resolution for the Kashmir issue. Mirwaiz was accompanied by Hurriyat executive members Prof. Abdul Gani Bhat, Bilal Gani Lone and Masroor Ansari. Ironically, it is the same team that had held talks with the then deputy prime minister L.K. Advani in New Delhi in 2004. The two absentees from the Hurriyat this time were Fazal Haq Qureshi, and Moulana Abbas Ansari, both unwell.

On January 22, 2004, after a two-and-a-half-hour meeting between Advani and the Mirwaiz-led Hurriyat delegation, they agreed to find an “honourable and durable solution” to the Kashmir problem through dialogue. Advani had des­cribed the meeting as a good beginning and had given credit to then PM Vajpayee for creating a climate of dialogue by offering hand of friendship to Pakistan. The Hurriyat delegation met Advani again on March 27, 2004. They also called on Vajpayee then. The same team met Manmohan Singh in 2005, after the UPA government took over. On May 3, 2006 another round of talks was held.

Now, 13-years down the line, the dialogue has turned sour. On returning from Delhi after a four-day interrogation session, Mirwaiz did not mince words about the hardening of positions while addressing a gathering at the Jamia Mosque in Srinagar. “Yes, we held talks with India and Pakistan and we are the same people. I think we don’t have to correlate the early 2000s with today. Today is different,”

Prof. Abdul Gani Bhat tells Outlook about the changing political equation in New Delhi. He says they had accompanied Mirwaiz to Delhi to show solidarity with the Hurriyat chairman during the NIA questioning. “The Hurr­iyat has not closed doors for any future eng­agement. There are rat­ional people in India who understand that it is only through talks that they can find a way out, not in rash decisions to involve the leadership of Kashmir in criminal cases,” says Prof. Bhat. “It’s important to understand that the government of India, the government of Pakistan as well as the leadership in Kashmir will have to change attitudes. They have to get around the table and start finding out the solution,” he adds.

Peoples Conference chairman Sajad Gani Lone agrees with the view. He warns Delhi of the danger involved in taking on the Hurriyat. “This (the NIA questioning Mirwaiz) shows the dialogue process has become a casualty. The Indian gov­ernment needs to show consistency and ­unwavering support to the dialogue ­process. This process is a non-violent method of resolving disputes and if we are to undermine this process, you are by default ­incentivising the alternative method, which is violence,” Lone tells Outlook. “The participants in the 2004 dialogue process had, in the midst of a violent landscape, shown a lot of courage to enter the process. If we are to go after them now, it proves all those people correct who had termed the dialogue a sham at the time,” Lone adds.

Observers say that such actions against the Hurriyat show that it pays the BJP politically to show that they are tough. A senior police official, who wishes to stay anonymous, says that the separatist leaders have been conveyed that to be popular in Kashmir they’ll have to be prepared to face hardships. Another official describes Mirwaiz’s questioning as a huge policy shift. “Perhaps the government has decided to act with an iron hand against them to see how it helps the situation. After all, they are the faces from Kashmir that Pakistan recognises and the world knows,” he comments.