‘This Apathy Breaks My Heart’

'The government made promises galore. Some have been kept, but many remain to be fulfilled,' says father of Ankush Thakur, a sepoy in the Punjab Regiment who was killed in Galwan valley 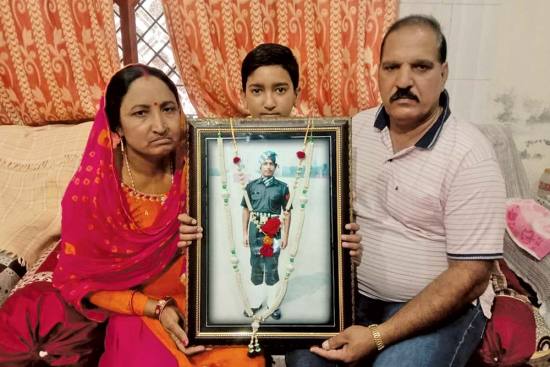 Four generations in the Indian army and a son lost to the India-China clashes last year in Galwan valley. Yet this family in Karohta, a small village in Himachal Pradesh’s Hamirpur district, wants Aditya, a class-8 student, to eventually join the army. In fact, every third household in the village has somebody in the army or at least somebody who retired as a soldier. Aditya’s brother Ankush Thakur, a sepoy in the Punjab Regiment who was killed in Galwan valley, is remembered as a brave man who chose to join the army when he was doing his graduation at a local college. His father, retired soldier Anil Thakur, 54, says a lot has changed at home since Ankush’s death. “Our only regret is that our son went to battle unarmed. We can imagine how tough it must have been to push the Chinese back in extremely hostile conditions,” he says.

Ankush, who joined the army in 2018, had barely completed a year-and-a-half in service—including three moths in Siachen—when he was killed. He was expected to return home after his Siachen stint when reports of Chinese intrusion led to his deployment in Galwan. Anil and his wife Usha Devi often go through Ankush’s photographs and belongings, trying to remember the happy moments in his upbringing as a child born 10 years after their marriage. “Ankush was precious to us, but we never knew he was equally precious for the nation,” says Anil. “We are unable to come to terms with the loss. The vacuum caused by his death continues to haunt us every day. My wife is shattered. She fights frequent bouts of depression and high blood pressure. And all we have got are lip service and emotional slogans.”