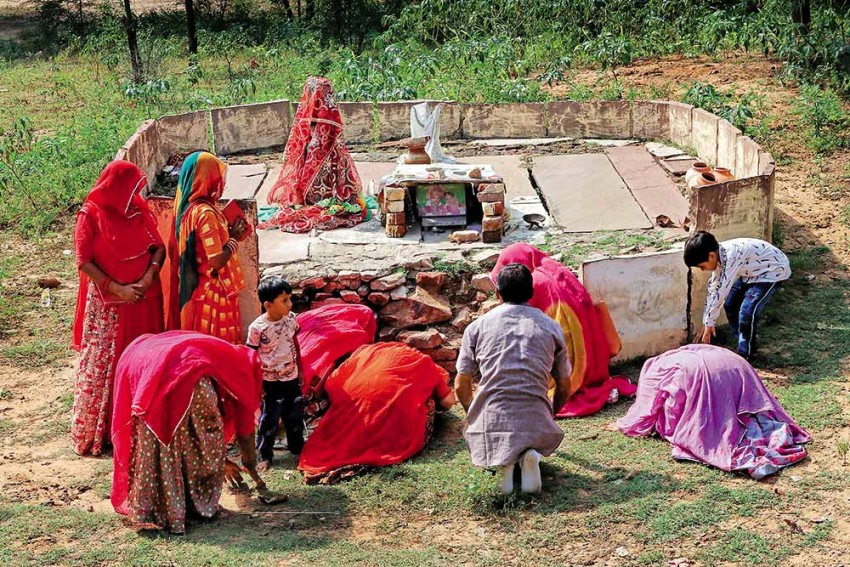 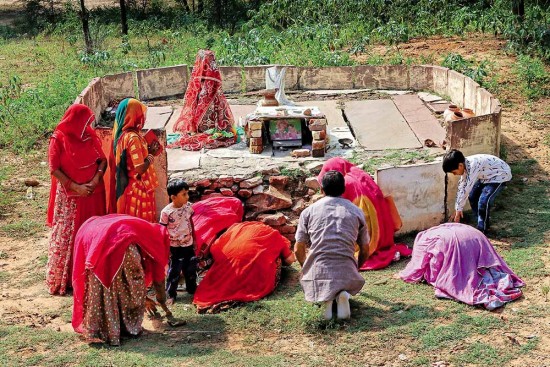 A red stole draped around a trident standing on a brick platform is not much of a temple. But for a group of women in bright saris, this is a pilgrimage they had to make, a trip that has brought them more than 200 km from Nagaur to pay obeisance to a woman who had attained “divinity” at this very place more than three decades ago. For many more, the makeshift shrine is a scar that cannot be erased, a painful memory of a young woman—she was just 18—carrying out the banned Hindu custom of ‘sati’ by burning herself on the pyre of her husband, cheered on by thousands of people. Roop Kanwar’s legacy lives on in this village in Rajasthan’s Sikar district: a goddess for some, the victim of an oppressive and patriarchal culture for many.

And in the 32 years since the bubbly teen widow burnt to death on September 4, 1987, the 22 police cases are all but forgotten. Only one is still being heard in court and the judgment is expected within weeks. Curiously, there has been no conviction in any of the cases—21 of them for glorification of sati, a practice declared unlawful way back in 1829 when the British ruled India. A lower court acquitted 33 suspects in 1996. Since that verdict, almost all of those accused in cases related to the custom-sanctioned immolation have been acquitted, except for 20, among whom only nine are being tried because six of them were dead already and five are on the run.

Most people in this nondescript village insist that Roop’s act was voluntary—never pressured, drugged or tricked, unlike what human rights campaigners keep spouting. “She sat unmoved on the pyre, chanting gayatri mantra. Nobody forced her,” Supyar Kanwar, an 80-year-old neighbour, tells Outlook. “If she had been forced, there was a possibility of her running away from the pyre. It would have been so embarrassing for all of us,” says Supyar, reprising what the villa­gers believe the “strength and commitment” for  sati came to the young widow from within.

While the custom had been prevalent among Hindus for centuries, it holds a special place among Rajputs, a warrior class for whom death above dishonour served as a motto during the medieval period. It was also the fountainhead of the custom of jauhar—mass suicide of women by jumping into a huge fire—to escape capture by enemy soldiers. It’s precisely the reason why many see nothing wrong in the death of Roop, who loved cinema and tikki-choley, a bright student at a convent school.

“Zindagi zindadili ka naam hai, murdadil kya khaak jiya karte hain (Life is all about the brave. What is a life for the weak and scared?),” says Gopal Singh, 60, the elder brother of Roop.  “Otherwise, insects live too. Do something that the world remembers you. Even if you live for four days, live like a king,” Singh sermonises, proud of his version of Rajput valour and honour. But practicality catches up soon and he quickly declares his position against sati vis-a-vis his sister. “She did it voluntarily. She was the youngest in the family and the youngest is usually everybody’s favourite. She was, too,” he says, pronouncing the loss to the family.

Roop loved to visit religious fairs, he recalls, and would visit the Rani Sati temple in Ranchi, where the family lived before shifting to Jaipur.

Jaipur-based Rajiv Gupta, a retired professor of sociology, scoffs at this assertion of women willingly walking to a burning fire. “Nothing is voluntary. These acts are reinforced through religious indoctrination, caste-specific cultures and family systems. Roop Kanwar’s family created the supportive space and mythical dimensions for the sati. It’s our collective failure that such a socio-psychological state could develop in the village,” he says. Roop’s case marked a seminal point in not just the social but also the political history of the state. “It strengthened women’s movements, but also paved the way for political consolidation of Rajputs, a raw form of which emerged during the protests against the film Padmavat,” he explains. “The 1987 sati was a classic case of the recurring clash between traditionalism and modernity.”

Brother Gopal Singh says Roop went to the pyre on her own free will...there was no pressure.

While activists marched in hundreds to oppose sati after Roop’s death jolted a nation’s conscience, Rajput-majority groups—including professors, judges and bureaucrats—walked in thousands to protest against government interference in religious practices. The Rajputs were led and mobilised by Kalyan Singh Kalvi, then state president of the Janata Party, later a minister in the Chandrashekhar-led Union government. Now, Kalvi’s son Lokendra Singh Kalvi heads the Karni Sena, the outfit that spearheaded the protests against Padmavaat for allegedly portraying the valiant Rajput queen Padmavati in poor light. The opprobrium over Roop’s death, and phone calls from power corridors in Delhi, forced the Rajasthan government to pass an ord­inance that made laws against sati tougher. Then chief minister, Congress’s Haridev Joshi, had to step down. The ordinance followed an act Parliament passed next year.

Despite the ban on the practice in 1829, sporadic cases continued for another 150 years. And Roop’s case was not the first in indepen­dent India. Of 40-odd recorded cases of sati in the country since Independence, 26 were in Rajasthan. The Commission of Sati (Pre­vention) Act, 1987, was more stringent in the sense that it outlawed the glorification of the practice, including “construction of a temple or other structure or the carrying on of any form of worship or the performance of any ceremony there at, with a view to perpetuate the honour of, or to preserve the memory of, a person who has committed sati”. However, several temples had sprung up across the country dedicated to women who had committed sati. The faithful throng these shrines, inc­luding the one dedicated to Roop.

Deorala is still the quiet village. Rural architecture jostles for space with modern houses kitted out with ceramic designer tiles and glass panes with floral inlays. The influx of pilgrims over the years has swelled Deorala’s economy. Lakhs of rupees were collected to build an imposing temple in 1987, but the law came in the way.

But for the women—a few men and children—from Nagaur, a shrine’s sanctity rests on the deity, not just on its physical structure. As the women genuflect before a wedding photograph of Roop and her husband at the temple’s sanctum sanctorum, the sun’s rays reflect a world where blind faith still overshadows reason. It’s a world where the law’s interference is more outrageous than the act of a woman burning herself to death. Willingly, they insist.

By Salik Ahmad in Deorala and Jaipur