From arresting peasant leaders to booking them for sedition, Assam Police has tried everything to quell protests against the Citizenship Amendment Act 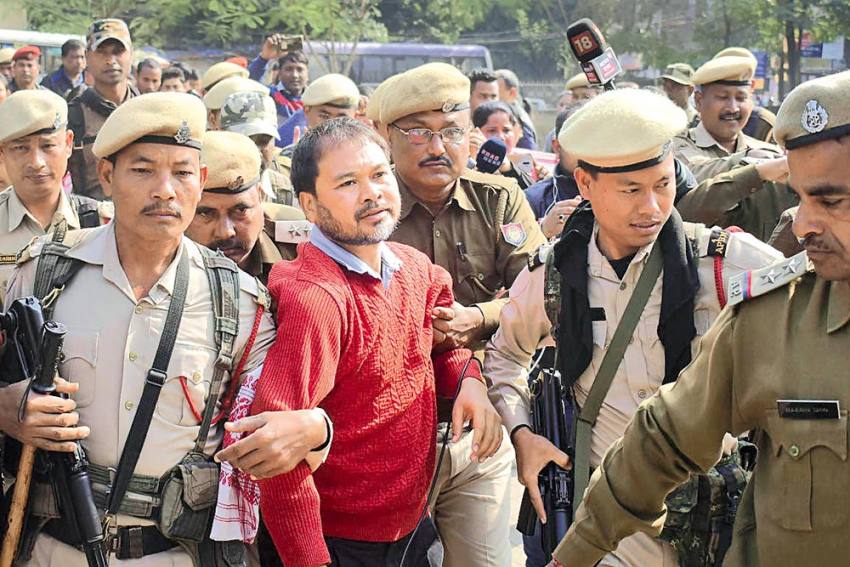 Lal Salam
Peasant leader Akhil Gogoi after his arrest on charges of inciting violence during anti-CAA protests
Photograph by PTI
Sadiq Naqvi January 16, 2020 00:00 IST They Just Hate Dissent, How North East Police Flexes Its Muscle Or Is It The BJP? 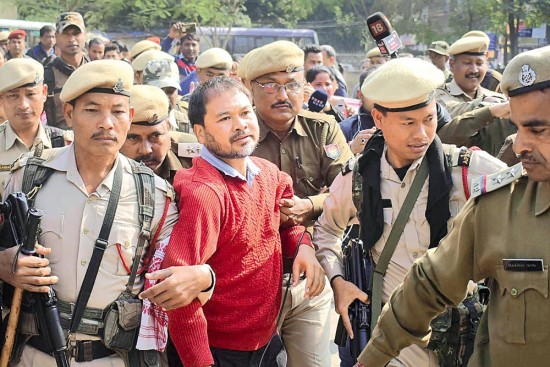 On December 12, RTI activist and peasant leader of Assam, Akhil Gogoi, and two of his associates were arrested for allegedly inciting violence during statewide protests against the contentious Citizenship (Amendment) Act (CAA). Many believe that the charges were flimsy but police insist that Gogoi was actively involved in mobilising people to hit the streets. The BJP-led government blamed Congress and “urban naxals”, a term used by the right-wing to describe dissenters, for the violence. Police quickly pulled out an old case against Gogoi, dating back to 2009, and handed over the probe to the National Investigation Agency (NIA).

Gogoi, who heads the Krishak Mukti Sangram Samiti (KMSS), has never hid his Left leanings, calling himself a “Marxist but not Maoist”. And he has a history of run-INS with the establishment since he burst into the scene during the previous Congress government. But the present dispensation app­ears to have marked him out for special attention. Within months of the BJP government taking over in 2016, Gogoi was put behind bars for more than two months. On December 17, a tearful Gogoi told journalists outside a court in Guwahati that he was being subjected to “inhumane torture” in NIA custody. Gogoi is charged with sedition besides other alleged crimes.

Hiren Gohain, a leftist intellectual highly critical of the government, says that “it is the state that is more guilty of terror than Akhil Gogoi”. Debabrata Saikia, leader of Opposition in the state assembly, also blames the police of bias for targeting “only Congress and KMSS workers”. Assam Police have arr­ested at least 50 Congress workers since protests singed the Brahmaputra Valley after CAA was passed in Parliament—government offices were set ablaze and effigies of BJP leaders burnt. At least five people were killed in police firing on protestors in Guwahati.

Assam has seen a surge in sedition cases with as many as 17 registered in 2018.

Last month, Assam Police arr­ested another anti-CAA activist Shrinkhal Chaliha for “provocative” comments. He was granted bail on January 10 by the Gauhati High Court even as police tried to re-arrest him in another case a day earlier. “One must understand the difference between democratic movement and expression of one’s view and waging war against the state…One must also not lose the sight of the fact that democratic movement and right to dissent is an important facet of the right of expression guaranteed by the Constitution,” the HC said while granting him bail.

Assam has seen a surge in sedition cases with as many as 17 cases in 2018, only behind Jharkhand with 18. The trend seems to have continued in 2019 despite a dismal conviction rec­ord—2018 data shows only five convictions and 87 acquittals in cases of offences against the state. In January, Assam Police booked Gogoi and three others, including Hiren Gohain, for sedition and other charges after a protest meeting against the Citizenship (Amendment) Bill. In February, in the aftermath of the Pulwama attack, at least 130 people were arrested for alleged “pro-Pakistan” social media posts. A few were charged with sedition.

Similar allegations of highhandedness are leveled against pol­ice in neighbouring Manipur. “If you see what happened to me and how the police are behaving in other places, it is clear they are being used by those who are in power, they are manipulating the forces to suppress the people,” says Kishorechandra Wangkhem, a journalist from Manipur who was first charged with sedition and jailed for a little over four months under the draconian National Security Act for a Facebook post criticising chief minister N. Biren Singh in 2018.

NCRB data puts Manipur, a BJP-ruled state, with highest number of cases of offences against the state with 307 such cases in 2018. In December 2019, police arrested L Sotinkumar Singh of the CPI and charged him with sedition after a shutdown called by the Left.