Preventive measures are key to improving overall outcomes. Vaccinations against JE, varicella, measles, mumps and rubella virus have been widely successful in preventing outbreaks such as AES. 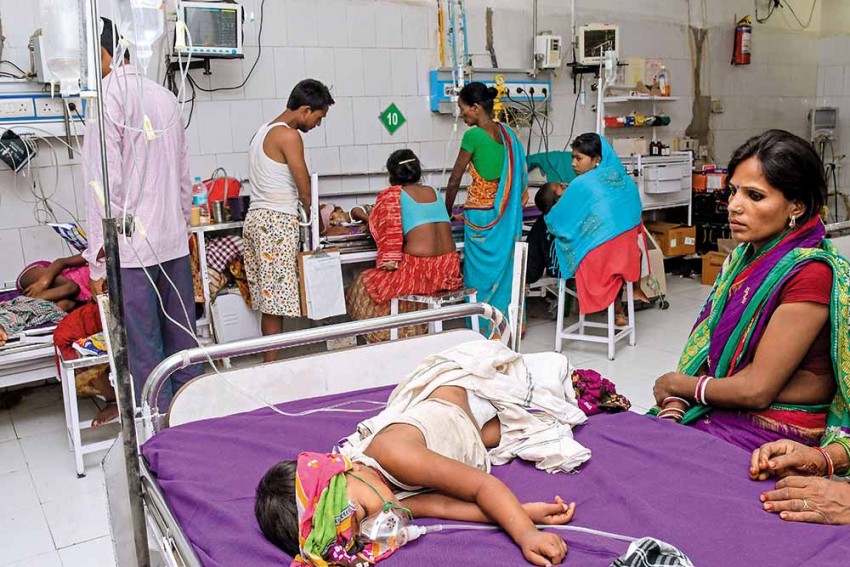 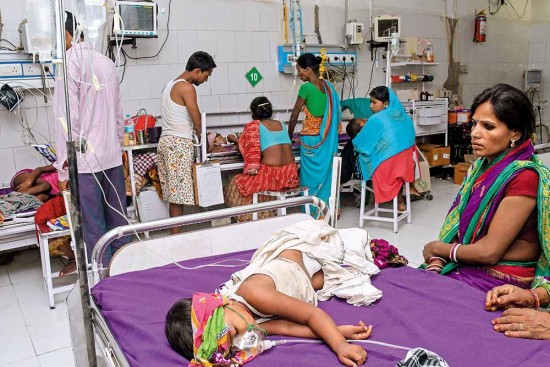 The World Health Organisation defines Acute Encephalitis Syndrome (AES) as a constellation of symptoms like acute onset of fever and altered mental status—confusion, disorientation, irritability and impaired speech with or without seizures in a person of any age, occurring at any time of the year. It can be caused by infection, inflammation or toxic metabolic reasons, leading to affliction of the brain tissue.

Two medical terms need to be understood in this context: encephalitis and encephalopathy. The former is almost always accompanied by inflammation of the meninges (protective tissues that cover the central nervous system). The latter is a physiological derangement of brain function caused by metabo­lic conditions: very low blood sugar level, kidney or liver failure, disturbed fluid and electrolyte balance, drugs or toxins like lead, mercury, pesticides to food-related toxins, like, possibly those in litchis.

The term AES collectively includes enc­ephalitis as well as encephalopathy and hence can have myriad causes. In most AES cases, the cause is presumed to be viral and is treated accordingly. The actual identification of the causative agent is difficult, as in around one-third patients, no causative agents can be identified.

Encephalitis is more common in children, affecting mostly those less than age 15. It differs greatly in different reg­ions and in different seasons of the year. The Japanese encephalitis outbreak was the earliest identified etiological agent in 1950s in India. Since then, multiple agents have been identified causing periodic outbreaks from time to time. The Chandipura Virus has been reported from the Nagpur region of Maharashtra, eastern Gujarat and Andhra Pradesh. Nipah Virus has been reported from West Bengal and Kerala. The mite-borne Scrub typhus has been found in up to 20 per cent of all AES cases in the Gorakhpur region of Uttar Pradesh and about 14-60 per cent elsewhere in the country. It is beco­ming increasingly common due to rapid urbanisation of rural areas. It has now been isolated at various cities in Tamil Nadu, Uttarakhand and UP.

Early identification and immediate ­treatment may be the most crucial steps in cases of AES.

Toxin mediated encephalopathy has emerged as a major cause affecting children in recent years. Encephalopathy linked to litchis has been reported in epidemic forms in Muzaffarpur, Bihar, and Malda, Bengal. Every year, during the harvest period in the months of April-June, surge in deaths due to AES, predominantly in children has been observed. The victims are usually malnourished children of lower socio-economic strata. The toxins present in the fruit—hypoglycin-A and methylene cyclopropyl glycine (MCPG)—result in severe fatty acid oxidation inhibition and hypoglycaemia. They impair the energy producing mechanisms in the body, leading to reduced blood sugar. This in turn leads to reduced energy supply to the brain and impaired brain functions, resulting in encephalopathy. Malnourished children are highly vulnerable due to a reduced store of energy. Two studies, so far, have found an association with litchi consumption, prolonged fasting and malnutrition.

Between May 26, and July 17, 2014, 390 patients of AES were admitted to the two referral hospitals in Muzaffarpur of whom 31 per cent died. At admission, 62 per cent had low blood glucose concentration. Litchi consu­mption, and missing of an evening meal in the 24 hours before illness onset, were the associated factors. About 90 per cent of case-patient specimens had severe disruption of fatty acid metabolism. Early identification and immediate treatment of hypoglycemia may be the most crucial step in the management of such cases.

Some of the causes of AES are self-­limiting, while others may rapidly lead to death or severe neurological damage. Mortality is mainly due to swelling and inflammation that create severe ­pressure around the brain and damage its vital centres that control respiratory and circulatory functions. Severe and sudden AES leads to high mortality within 2-5 days and those surviving are usually left with ­residual neurological deficits. In milder cases, patients can recover in 1-2 weeks.

AIIMS, New Delhi, has set up a Centre of Excellence and Advanced Research for Childhood Neurodevelopmental disorders  in the Child Neurology Division, Department of Pediatrics. Of its various projects, one is dedicated to study comprehensively etiological profile of AES, encephalopathy and encephalitis in infants, children and adolescents.

(The author is the chief of the Child Neurology Division, Department of Pediatrics All India Institute of Medical Sciences, Delhi)

Not Just Muzaffarpur, AES Is Spreading Across India And Doctors Are Baffled