In the Tamil state’s bipolar politics, three ‘others’ try to make an impact 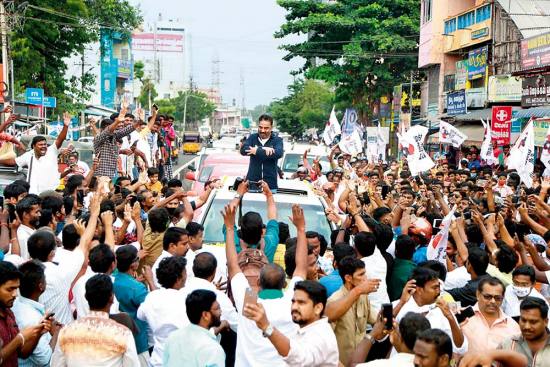 What is common among a filmstar-turned- politician, a film director-turned-public speaker spewing extreme Tamil nationalism and a chubby-faced, smooth-talking young scion of a powerful family? All three are angling for electoral space in the state domina­ted by the DMK and the AIADMK.

Kamal Haasan, a three-time national award-winning actor, and his political party Makkal Needhi Maiam (MNM), Seeman, director of five Tamil films and a powerful orator, with his Naam Tamilar Katchi (NTK), and T.T.V. Dhinakaran, nephew of J.  Jayalalitha’s now retired aide Sasikala, with his breakaway outfit called Amma Makkal Munnetra Kazhagam (AMMK) have ­assembled their own alliances to take on the might of the multi-party ­alliances forged by M.K. Stalin of the DMK and Edappadi K. Palaniswami of the AIADMK. Their targets are voters not committed to either of the major fronts, those looking for a non-DMK-AIADMK alternative and the large bunch of first-time voters. “These three are competing among themselves to emerge as a viable third front that can challenge the dominance of the DMK and the AIADMK beyond the 2021 ­election, says writer Maalan. “Vijaya­kanth tried this in 2006 before he ­buckled and forged an alliance with Jayalalitha in 2011, and then formed his own third front with five other smaller parties in 2016, only to be decimated. The story of the third front in Tamil Nadu has been dismal all along.”