Home  »  Magazine  »  National  » Interviews  » Interview »  The Thackeray Legacy Is Something To Be Proud Of: Aaditya Thackeray

The first from his family to contest elections, Shiv Sena's Aaditya Thackeray speaks to Outlook on Aarey issue, agrarian distress, unemployment and the Thackeray legacy. 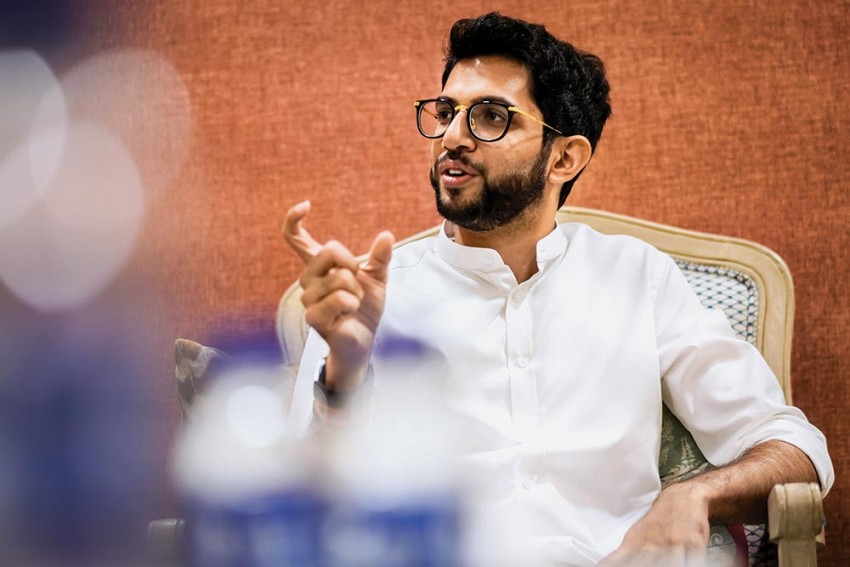 Photograph by Apoorva Salkade
Bhavna Vij-Aurora, Giridhar Jha October 16, 2019 00:00 IST The Thackeray Legacy Is Something To Be Proud Of: Aaditya Thackeray 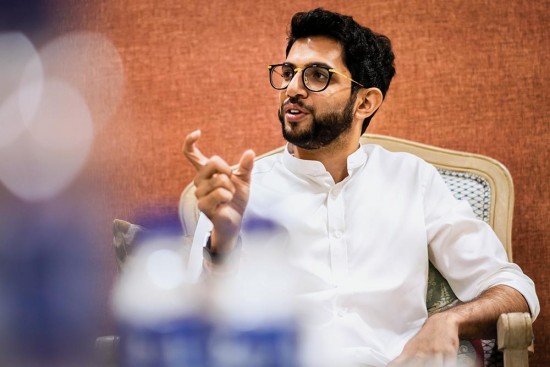 This Shiv Sainik wants to forge new paths while being rooted in his family legacy. The first from his family to contest elections, Aaditya Thackeray, the 29-year-old running for the Worli assembly seat, is enjoying reaching out to people. Pass­ionate about protecting the environment, the Thackeray scion is also a strong advocate of a thriving night-life in Mumbai to boost tourism and economy. In an interview to Bhavna Vij-Aurora and Giri­dhar Jha, the articulate Yuva Sena chief vows to continue the fight for Aarey forest even if it means taking on ally BJP. “It’s the duty of a true friend to caution you if you are on the wrong path,” he says. He is as much at ease talking about civic issues, unemployment, agrarian distress and the Marathwada drought as about security concerns at the impending U2 concert in Mumbai.

This is the first time anyone from your family is contesting elections. What made you take the plunge?

Politics is one field where you can imp­act so many lives with one decision. Look at plastic. We enforced a plastic ban in Maharashtra last year. I won’t say it’s a 100 per cent success…it has to be a people’s movement. But all establishments with licences—major restaurants, theatres and cafes—have gone plastic-­free. The Centre has taken from the Maharashtra notification for a national ban. I was part of the team that wrote the law. So, one piece of paper can ­impact a billion lives in India and the environment globally.

You have taken up the Aarey forest issue. Do youth respond more to the idea of climate change?

Aarey is more than that. It’s about an ecosystem that already exists. The same MMRCL cut 3,000 trees in the city for the Metro after they agreed to transplant them. In Aarey, you have leopard Luna roaming around with nine cubs. There’s the endangered rusty spotted cat, and lesser flora and fauna that can’t be transplanted. That line has been ext­ended for no reason.

But your stand puts your party in dir­ect confrontation with the BJP….

It’s not a Sena vs BJP or Aaditya vs Devendraji issue. It’s a very clear human-­nature conflict. I strongly believe the government and the CM (Devendra Fadnavis) are being misguided by a couple of MMRCL officials, leading to this dictatorial action of cutting down trees in the middle of the night. Why do you have to do it in hiding? You might send them to PoK to clear out terrorist camps than to clear out a bunch of leopard cubs.

Is there a message for the government there? That you’ll continue to raise issues you’re not comfortable with?

Absolutely. We’ve done it in the past. The land acquisition bill, demonetisation or even GST, which we got amended for Mumbai. What we intend to do—and we also seek feedback from the BJP—is that when there are two brothers or friends, it’s your duty to point out what’s going right or wrong. When people voice things that can damage the government, it’s our duty to get it back on track.

The CM’s post seems settled in favour of Fadnavis. Will you be pitching for deputy CM?

I’m not running after any post. I’m open to any responsibility to serve the people. It’s too early for a political party to figure out CM, deputy CM, cabinet, speaker etc. Psephologists are saying we will do well. That’s a good thing, but we know it’s a matter of ifs and buts so long as the votes are not in and counted.

Your father says there’s no Big Brother in the alliance, but there’s a public perception. Since BJP is contesting more seats.…

We had a commitment for Lok Sabha polls that we are together for a couple of issues, including Ram temple. We raised it in November, and the court case was fast-tracked. Two, farmers in Maharashtra. That work has started bec­ause of Sena’s pressure. We have helped 10 lakh farmers get Rs 960 crore from the crop insurance scheme. This was a major win for us as a party. Adjusting with the seats only proves our value as a true friend. This alliance is for the people, we have stood by BJP for the people.

With a young leader like you, can we expect a Sena 2.0?

No, the Sena has always taken up issues relevant to the times. A party always has to be relevant to the times, be the voice of the people. If today there are no jobs, we have to speak about it. A lot of people were surprised when we spoke about the environment. Moreover, all our iss­ues are resonating across the country. States like Madhya Pradesh and Rajas­than are talking about reserving 80 per cent jobs for locals—something we raised in the 1970s. Trump is doing it. Brexit is all about that. It’s not about refusing anyone coming into your state.

Also, people were stunned when I spoke about night-life. But then I came across a YouTube video of my ­grandfather (Balasaheb) from 2001 or 2002…he had spoken about night-life back then. Mumbai 24/7 would maj­orly impact state revenues—tourism, businesses, employment. The service industry and the food and beverage industry in Mumbai employ about 5 lakh people. Global norms say you have to have three shifts in a 24-hour establishment. I’m not saying jobs will go to 15 lakh, but maybe 10 lakh? London has a night economy—from 9 pm to 9 am—of 5 billion pounds.

Do you get intimidated by the Thac­keray legacy?

No. The legacy has done good work. There’s something to be proud of. It’s not a burden, but a blessing. I think people have accepted that the three (Balasaheb, father Uddhav and uncle Raj) have diff­erent personas and different reasons to be in politics. I would be mimicking if I try to be the same person as my grand­father. You take certain characteristics and apply them your own way.

Your brother Tejas’s presence in some rallies has fuelled speculation…

He’s a wildlife enthusiast. He’s just trying to see what is wilder—politics or flora-­fauna! His team of researchers has helped us a lot. We as politicians can make political noise, but you have to back it up with information. These are guys who will stand against us if we do wrong to the environment. They are not biased towards us or against us. They are biased towards nature. They are our in-house activists.

Balasaheb is famously quoted as saying an itch for public life is a permanent one. Did he give you any advice?

He told me—don’t let power go to your head. He said he had seen many people go down because of arrogance. His words were: “Always remember, we are zero without the people who support us. Don’t ever think you are a hero. It’s the people who are the heroes.” Second, his advice to me and other family members was that money and power are transi­ent­—they come and go. But if you lose your reputation, it will never come back.

What about your father?

One of his biggest assets is equanimity. He treats victory and loss in the same way. I’ve never seen him extremely exci­ted or extremely upset. Also, he can be inscrutable. Other political parties can’t guess his next step.

Another politician, other than a Shiv Sainik, that you admire?

Tony Blair. He said the best advice for a young politician is to keep learning. Every politician across the world can teach you something. In India, it’s Modiji. I admire the way he works relentlessly. Even Sharad Pawar. Everyone has something to teach. I have a long way to go yet.

How have the three politicians in your family influenced you?

I admire the clarity of thought and vision of my grandfather. My father tells me to think a thousand times before making a promise because you cannot go back on it. Regarding my uncle (Raj Thackeray of MNS), I have not had major interactions with him in the past 15 years, so I won’t be able to say anything.