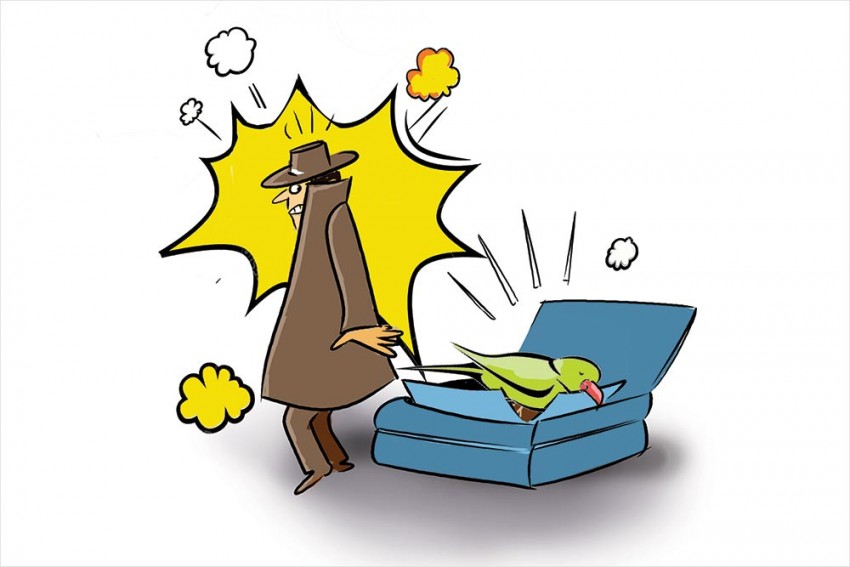 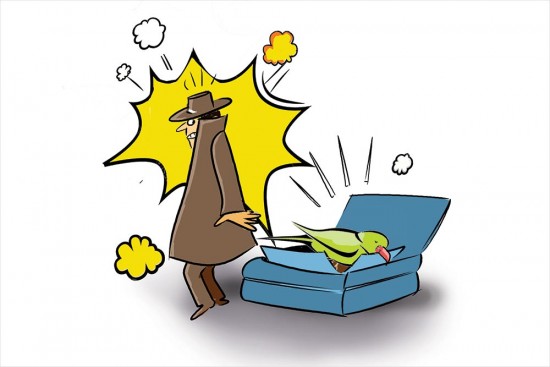 They stuff gold up their nether orifices, they hide Christina in fake wigs and they swallow bags of Charlie to evade the authorities. But Uzbekistani national Anvarjon Jonov had a rather different consignment to smuggle—unconscious parakeets in shoeboxes stuffed inside his luggage. Airport personnel spotted the birds in his bags, which Jonov claimed were soft toys. On further inspection, the toys turned out to be living, breathing creatures (he was right about soft though). But the parrots’ ordeal did not end there. They were produced before a magistrate in a court, who asked: “Where were you being taken?” To a land of berries, chillies and chirps, hopefully? 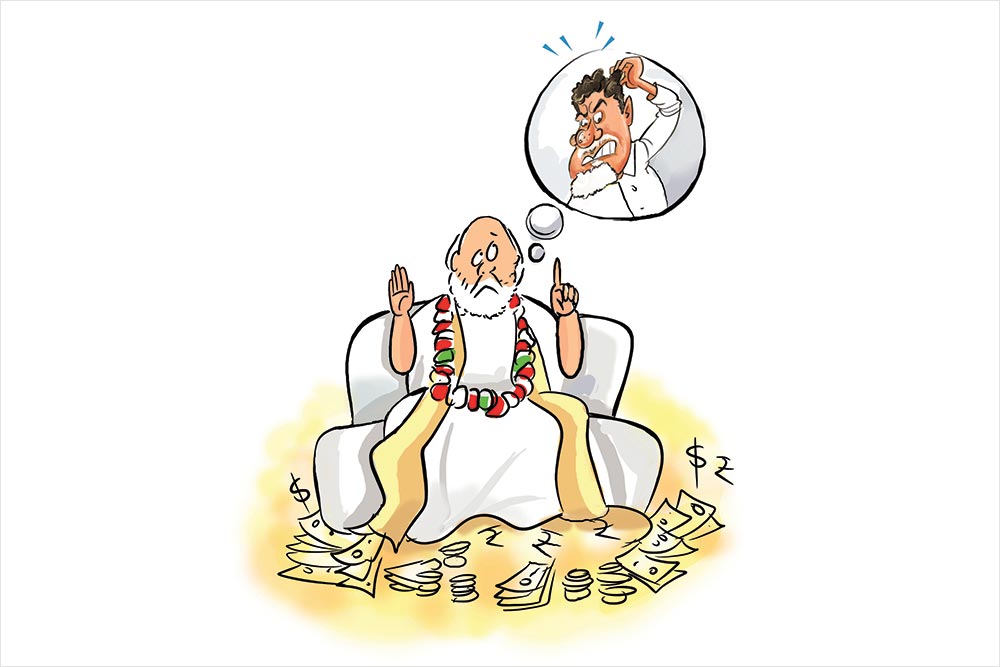 God Save My Moolah

There’s god, and there’s godmen and taxmen—the twain should never meet. When tax officials found crores of rupees, apparently black money, in the ashram and other properties of godman Bhagvan Kalki and his businessman-son Krishna, an accusatory finger turned against Chandrababu Naidu. The haul was Rs 44 crore in cash, Rs 20 crore in foreign money, 90 kg of gold, and documents revealing undeclared income of Rs 500 crore and foreign investments worth Rs 85 crore. There were no surveillance or stakeouts, but a tip off (allegedly) from a turncoat TDP MP—that the godman and his son were safekeeping (allegedly) Naidu’s unaccounted money. Has the ED taken note, too? 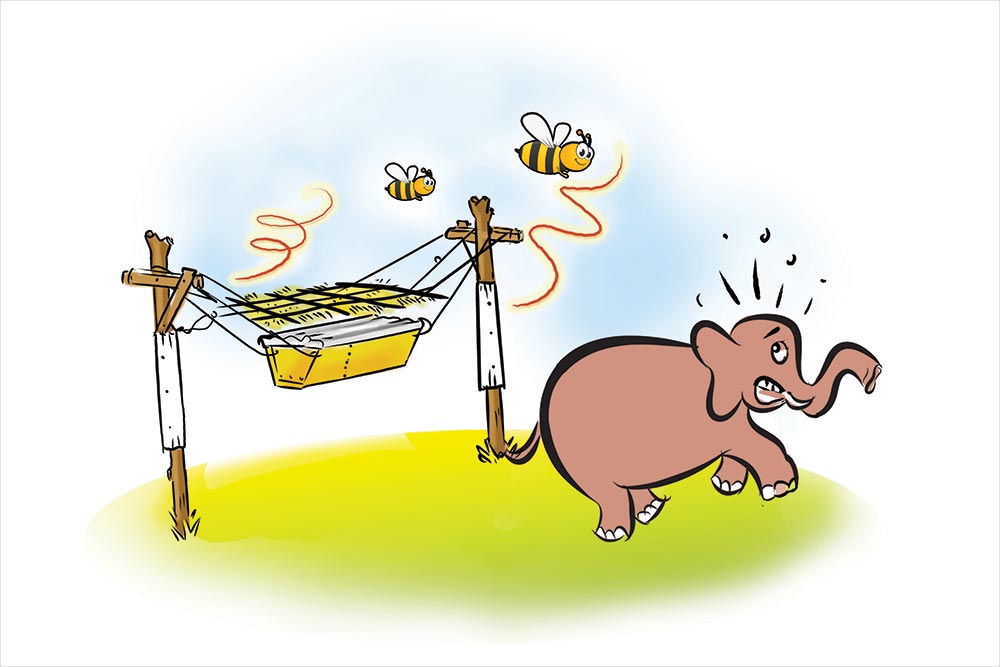 The human-animal conflict in Tamil Nadu seems to have finally found its David to its elephantine Goliath. To stop jumbos from raiding crops, the state government plans to set up ‘beehive fences’ around farms—elephants find the sound annoying and can sense it from a mile away. The buzzy bee experiment had worked in Kenya and Tanzania, and rangers in India hope to replicate the success. Even the railways have a ‘Plan Bee’ for its tracks in the Northeast, which stretch along elephant corridors. There, it’s a device that buzzes like a bee—a clear alarm for the wild herds to buzz off. 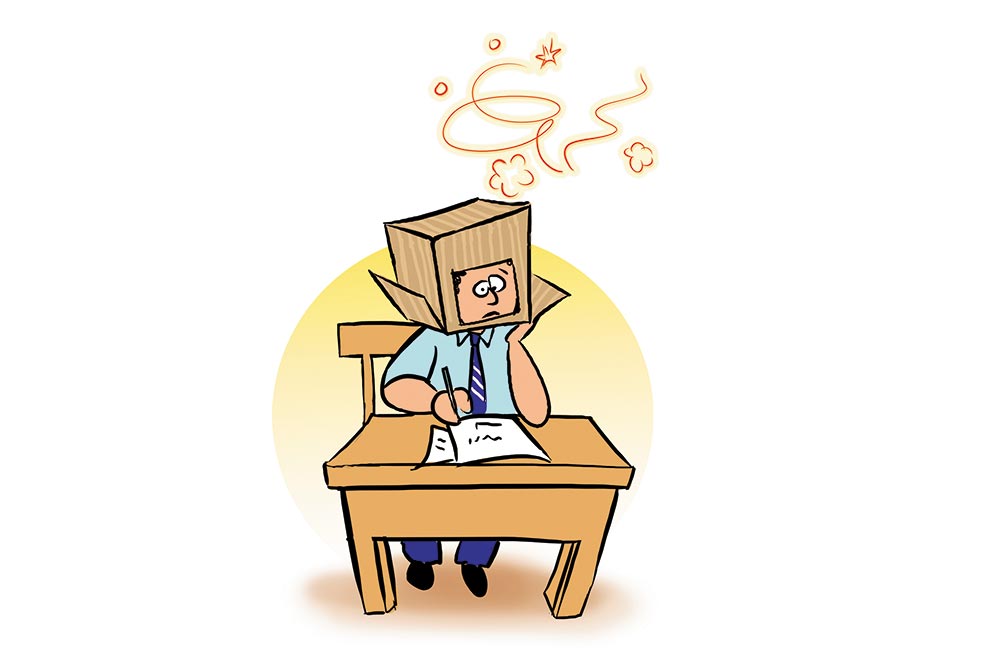 Group role play? Fancy dress competition? Novel air conditioning technique? Nope, students at a college in Karnataka sporting cartons over their craniums were part of an out-of-the-box attempt to stop them from cheating in exams! After an examiner posted a photo of the boxed students online, there was a deluge of outrage, including a reprimand from the education minister. One of the college’s directors defended the decision, saying he had sought the ‘consent’ of the students. We hope he wasn’t inspired by that erudite arbiter who once infamously declared “a feeble No may mean a Yes” to dismiss a rape accusation.

And Guru Nanak Said All is Equal

It’s versus vs versus as Sikhs—and non-Sikhs—celebrate Guru Nanak Dev’s 550th birth centenary. The SAD-BJP combination, along with the Shiromani Gurdwara Prabandhak Committee (SGPC), plans to hold the main event at a stadium near Gurdwara Ber Sahib in Sultanpur Lodhi, Kapurthala, on November 12. The Congress government in Punjab wants it at a Tent City in the area. The line is drawn: PM Narendra Modi, President Ramnath Kovind and home minister Amit Shah are likely to attend the SAD-BJP programme. The other side includes former PM Manmohan Singh, and he would be among the first ‘jatha’ to Kartarpur Sahib in Pakistan. 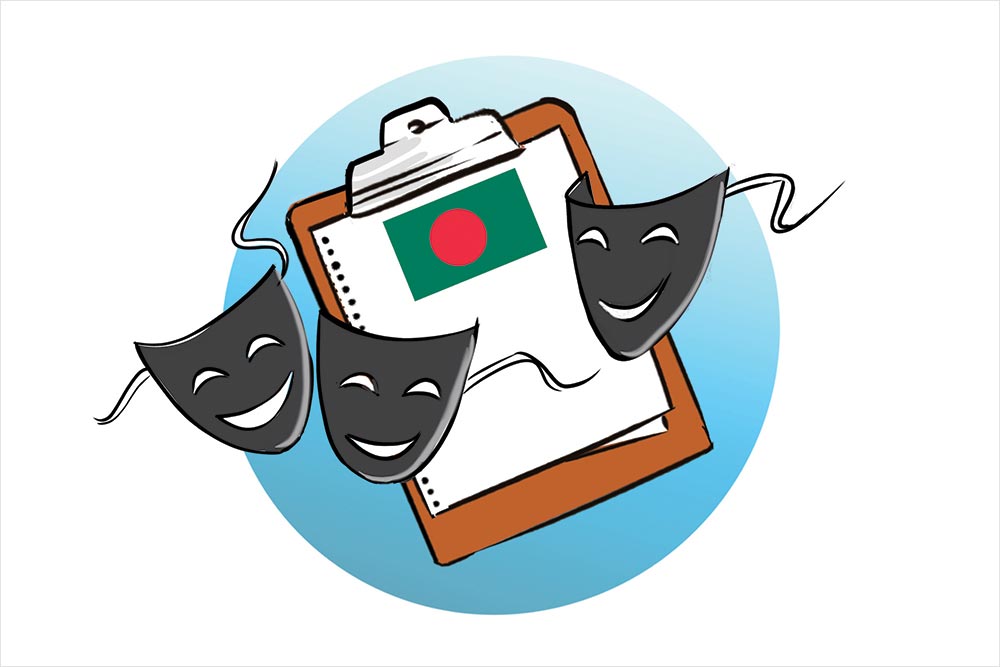 A Bangladeshi lawmaker has been caught breaking the law. And with impeccable flair! Tamanna Nusrat of the ruling party has been accused of paying lookalikes to take at least 13 college exams on her behalf. The scandal surfaced after a TV channel entered the exam hall and confronted the impostor. While Bangladesh Open University has expelled her from the BA course, some claim it was har­dly a secret. “The MP’s musclemen protected the proxy students. Everybody knew about it but said nothing....,” laments a college official.

Another Coat May Suit Him

The one inoculated with the Victrola needle is restless, again. Yes, Navjot Singh Sidhu—the gabby sardar who quit Amarinder Singh’s cabinet and who has power siblings Rahul and Priyanka on his friend list. In the interim, a lot has changed and Congress chief Sonia Gandhi is likely to heed the CM’s words on Sidhu—that he cannot work with the retired batsman and no position in the party’s state unit should be thrust on him. Sidhu, it is speculated, plans to turn his coat, again. Wife Navjot and he have apparently sounded out Kejriwal. Hippity hope hops from BJP to Congress to AAP? 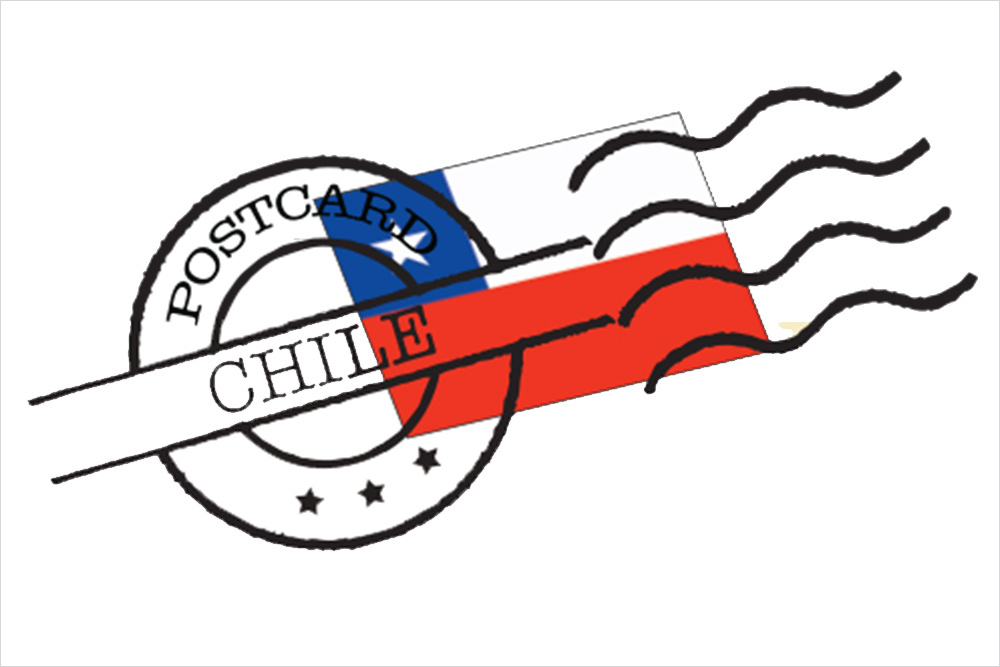 The military returned to the streets of Chile after more than three decades to deal with violent protests that rocked the country, disrupting normal life and leading to the death of at least 20 people. Many Chileans deplore economic inequalities, rising living costs and debt, and corruption in a country that is among the most prosperous and stable in Latin America. Chilean President Sebastian Pinera replaced his cabinet to deal with the protests. He said through his official Twitter account that the purpose of the change was to allow open dialogue and justice to solve the biggest political crisis since the country’s transition to democracy in 1990.

Chile had been under military rule for years after Augusto Pinochet toppled Salvador Allende, the world’s first elected Marxist president in a liberal democracy, in 1973 to head a repressive regime. It was only in 1990 that a civilian government was brought back.

Chile is a prosperous nation, but has one of the highest rates of income inequality. Its citizens deplore that and high corruption.

Pinera replaced eight key members of his cabinet, including the ministers of interior, finance and labour. Despite the reshuffle, thousands of protestors returned to the streets of the Chilean capital Santiago, calling for Pinera’s resignation and clashing with security forces. A fire broke out on the corner of a main street in Santiago, engulfing clothing stores, a McDonald’s and a med­ical center, according to CNN Chile. Police responded by firing tear gas, rubber bullets and water cannons. Pinera has called the protesters’ demands “legitimate” in a country that has among the highest levels of income inequality in the world.

The president has promised social and economic reforms to tackle demands at the heart of the unrest, including pension raises, affordable medical insurance, lowering the prices of medicines and stabilising electricity prices.

On Thursday, he announced cancellation of energy price hikes that would have affected, he said, “almost seven million Chilean households”. But many demonstrators see his efforts as too little, too late and continue to turn out in large numbers.

Protesters held a vigil for those who have died during the unrest. Images show a fountain in front of the Tribunal de Justicia in Santiago dyed red to represent blood as two women light candles. The protests began over a now-sus­p­ended price hike for subway tickets in Santiago but have since expanded, revealing anger among ordinary Chileans who feel they have been excluded from Chile’s economic rise.