The Gypsy Voters Of Democrazy 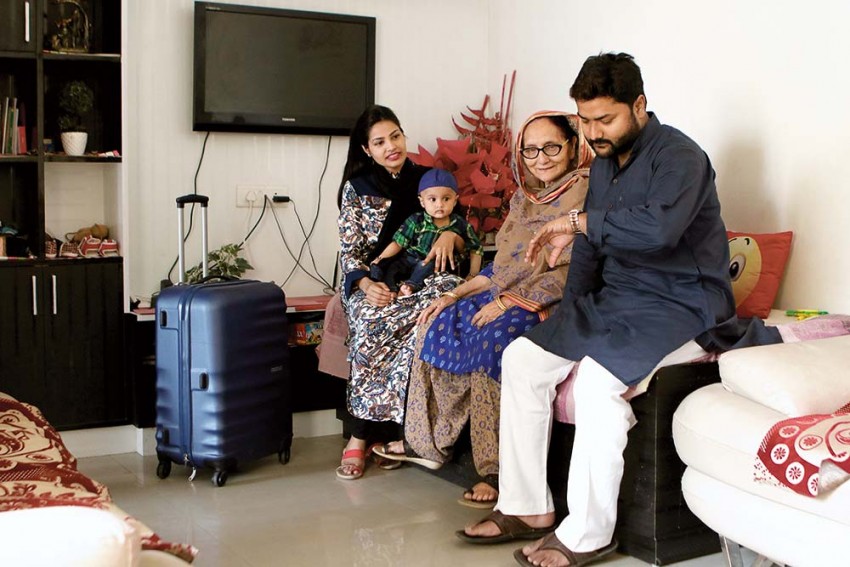 Azad Ahmad and his family get ready in Noida
Photograph by Suresh K. Pandey
Salik Ahmad April 10, 2019 00:00 IST The Gypsy Voters Of Democrazy 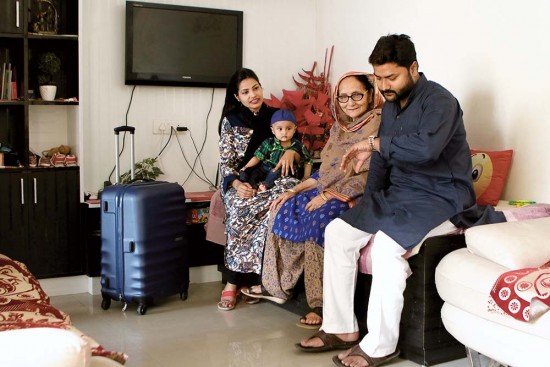 She is bustling about in her hostel room, anxiously doing the last-minute checks—setting her wet slippers against the wooden chair, brushing her shoes, pulling the floral bed sheet to a neat, wrinkle-free spread, switching off the fan, and revisiting her handbag for the phone, charger and wallet. Rimpi Borah, 28, is almost done, but for a sprig of perfume, her summery favourite. She moves towards the door with the keys and rechecks the PNR of her flight to Guwahati. Well, she has always been meticulous but never this skittish. Pardon her. This young woman is headed home—Golaghat, Assam—to participate in the mahakumbh of democracy. She is travelling 2,200 km to vote on April 11.

Ask this PhD student from Jawaharlal Nehru University (JNU), Delhi, why she is making all the effort and she responds, “Why not?” She thinks it was a serious mistake to not have voted in the 2014 general elections. “I foolishly thought a different government would hardly change things. But how wrong I was! Now I’ve seen what damage a government can do,” she says, sitting on a bench on the leaf-littered JNU campus, waiting for the cab.

It’s not hard to guess she is not a fan of the ruling party and equally easy to deduce why. “Earlier, I used to tell people with pride that I study in JNU; but not anymore. Fear has set in. Once I was returning to my hostel and the cab driver started telling me how JNU is a den of terrorists. It was late in the evening and I was scared,” she says, blaming branding JNU students as anti-national with ‘doctored videos’.

Besides, she alleges a witch-hunt against the JNU which manifests in the form of seat cuts in most departments. The MPhil seats at the Centre for the Study of Law and Governance, where she is doing her research, have been cut from 25 to 10 in recent years. Funding for the JNU library has also been stifled, alleges Borah, whose research pertains to citizenship and sub-nationalism in Assam. In her home state, she says, the BJP has injected communal poison through the citizenship amendment bill, which is part of the party’s manifesto. “The bill is against our secular ethos.” 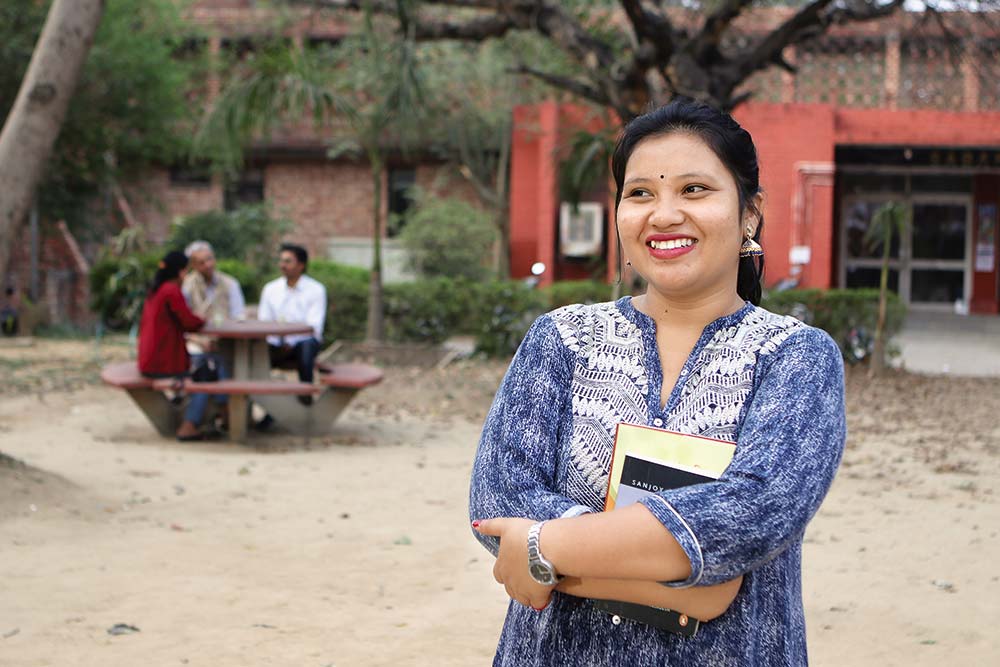 Rimpi Borah waits for the cab at JNU.

When the election machinery started to roll, Borah thought of getting herself registered as a voter in Delhi. But then, she decided against it because she wants to “bring changes back there [in Assam]”. There is only so much that a single vote can do, no? “One plus one plus one plus one makes so many,” she smiles. Her journey to Jyotinagar, her village in Golaghat, won’t be easy. She’s taking a flight from Delhi to Guwahati, from where she’ll be on a seven-hour bus ride home.

She is among the thousands of committed voters, taking leave from work or studies to go home and vote. Shantanu Misra, 33, is a Bangalore-based banker who is going to Lucknow, some 2,000 km away, to elect the representative for his Mohanlalganj parliamentary seat. The IIT-Kan­pur alumnus has always been an ardent voter. In the 2014 elections, he travelled from Delhi to Lucknow. He shifted base to Bangalore by 2017, when the assembly elections in Uttar Pradesh happened. True to his commitment, he flew to Lucknow to vote.

He doesn’t have complex ideas about why one must go the extra mile to vote. “It’s your right and you must exercise it. It’s simple,” says Misra, “If you don’t like any party, press the NOTA (none of the above) button. But you must certainly go.” He adds that India has a low voting turnout vis-à-vis other democracies and it needs to improve.

“It’s your right...if you don’t like any party, press the NOTA button. But you must certainly go,” says Shantanu Misra.

The voting in his hometown is on May 6, which happens to be a Monday. He got his tickets done and will leave on the evening of May 3, with plans of spending the weekend with his parents. On Monday, he’ll cast his vote and take a flight back to Bangalore in the evening. In addition, he is largely decided about which party he’ll vote for. “But I have kept a leeway for NOTA,” he says.

The motivation for going great distances to vote varies. Azad Ahmad, 32, a property developer who lives in Noida, is going to Gopalganj in Bihar to cast his vote. And not just him—his wife and mother are accompanying him too. Ahmad got the train tickets a week ago, but the reservation is yet to be confirmed. “If not, I’ll go by car,” he says.

“I want change. The BJP has only misled the people in the name of religion,” says Ahmad, who has a degree in history from the government college in Gopalganj. Earlier, he wasn’t particular about voting but this time, he has decided, he’ll go and vote come hell or high water. “Doesn’t matter what the result is. My vote will be against Modi,” he says, adding that he’ll go home and convince others to vote against the BJP. He is from Piprahin village and voting in his district is slated for May 12.

He hopes the Congress returns to power and brings changes in the scheme of things. The Congress, Laloo Prasad Yadav’s RJD, and three other parties have formed an alliance in Bihar ahead of the general elections. In the seat-sharing between the parties, Gopalganj went to the RJD. Ahmad isn’t a great fan of the RJD, or even the Congress. He only wishes the BJP loses.

The reasons that stir a voter to travel to vote are many. But this mammoth exercise—where millions of officials and security forces travel by foot, road, special train, helicopter, boat, and sometimes, elephant to reach the remotest of places or a booth with a single voter—gets undermined by the fact that 281 million Indians did not vote in 2014. Most of them couldn’t, even if they wanted to because a voter has to be physically present on polling day where he/she is registered. With millions of Indians on the move—for jobs and business—it is imperative to change the rules and design alternatives such as proxy, postal or online voting that will allow the itinerant voters to exercise their fundamental right.