Is the saffron party neglecting the smaller parties? Analysts say allies are alienated by the way the BJP functions. 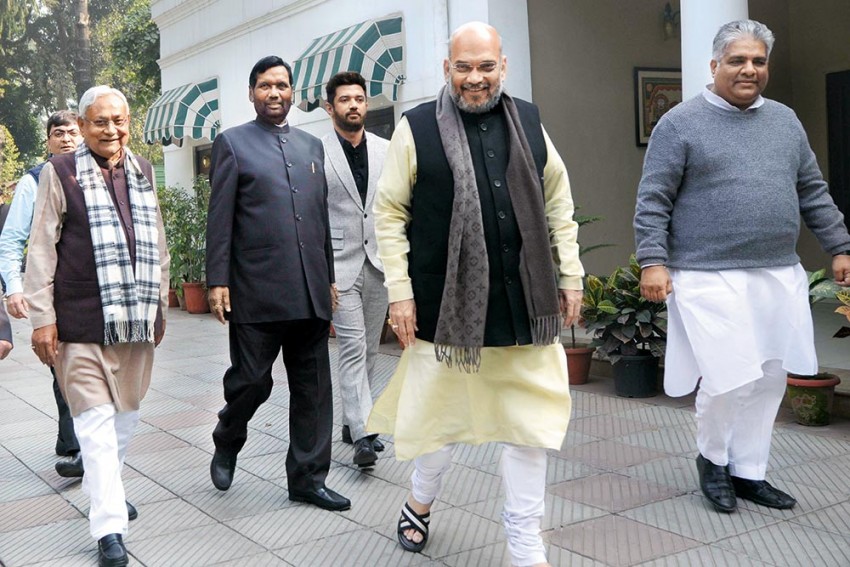 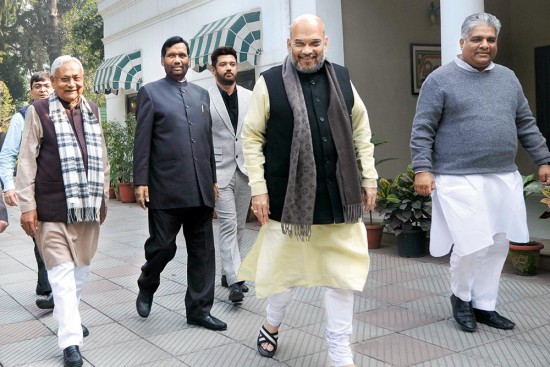 Still smarting from the drubbing in three heartland states and facing the greatest challenge from within, the beginning of the election year spells little cheer for the ruling BJP-led NDA. Sixteen of its constituents, both big and small, have quit since Prime Minister Narendra Modi took over in 2014. The latest instance came exactly a week into 2019, when the BJP’s ally in Assam, the Asom Gana Parishad (AGP) led by Prafulla Kumar Mahanta, pulled the plug on the NDA over the passage of the Citizenship (Amendment) Bill 2016, which seeks to grant Indian citizenship to non-Muslims from Bangladesh, Pakistan and Afghanistan.

Though the AGP’s exit wouldn’t hurt the Sarbananda Sonowal-led BJP ­government in Assam, it will definitely alter the arithmetic in the Lok Sabha polls later this year. It could well be the beginning of the troubles for the BJP in the Northeast as most parties in the region, including its allies such as the National People’s Party (NPP) in Megh­alaya and the Indigenous People’s Front of Tripura (IPFT), oppose the bill and it is likely to prove politically costly for the saffron party.

Putting the blame squarely on the Assam CM and his council of ministers for not thwarting the bill’s passage, the AGP said it’s an anti-people move. “We expected Sonowal to help us and it was his responsibility to raise his voice against the bill that will bring doom to the state,” says AGP president Atul Bora. “Many may think we were there for greed of power, but we wanted to fight staying in the government. And we fought till the last moment.”

With the entire Northeast up in arms against the bill and the Congress looking to woo the AGP into its fold, the BJP’s dream of bagging 21 out of the 25 Lok Sabha seats in the region may take a hit. The BJP, however, remains unfazed and its leaders claim those who quit the NDA would end up regretting it. “The AGP was not a BJP ally in 2014 and its departure won’t hurt BJP’s prospects in Assam,” says BJP spokesperson G.V.L. Narasimha Rao. “Our party has always followed the best traditions of coalition dharma and tried to accommodate the concerns of allies. Parties that have left us will rue their decision.”

However, political analysts say the BJP would be contesting the general elections this time with considerably less allies than it had in 2014. “NDA in 2019 will be much weaker than NDA in 2014,” says Sanjay Kumar, director, Centre for the Study of Developing Societies (CSDS), Delhi. “The signals are clear. The number of allies the BJP managed to attract in 2014 will come down this time. Modi was the glue then. That factor is missing now and the party has already lost some important allies.”

The party lost a key ally in March 2018, when N. Chandrababu Naidu of the Telugu Desam Party (TDP) quit the NDA citing its failure to meet his dem­and for special status to Andhra Pra­desh. Upendra Kushwaha’s Rashtriya Lok Samata Party (RLSP) followed suit in December. Defending his decision to exit the NDA, Kushwaha says the BJP is an utter failure at “coalition dharma”. “It only wants to finish off the smaller parties. They never walk the talk and only imp­lement the RSS agenda. They had no reason to deny three seats to my party,” he says. Last June, the BJP had walked out of its ruling coalition with the PDP in Jammu and Kashmir.

While murmurs of disenchantment are growing louder in big states like Uttar Pradesh and Maharashtra, BJP leaders refuse to attribute it to the setback the party faced in recent ­assembly elections. In UP, where the Bahujan Sama­j Party (BSP) and the Samajwadi Party (SP) announced an alliance, the BJP is grappling with its bickering partners—the Suheldev Bha­ratiya Samaj Party (SBSP) and Apna Dal (Sonelal), who are seeking more respect and recognition from the Amit Shah-led party. A senior BJP leader feels it’s usual for regional parties in UP or elsewhere to make noises to be heard during election season.

“The BJP only wants to finish off the smaller ­parties,” says Upendra Kushwaha of the RLSP.

Maintaining that they are very much part of the NDA, Apna Dal (S) president Ashish Patel says his party will wait for the central leadership to concede its demands on reservation in contractual jobs and appointment of OBCs at tehsil offices and police stations. Claiming it was the Yogi Adityanath-led government’s apathy towards the party that necessitated an outburst, he said Apna Dal leader Anupriya Patel, who is Union minister of state for health and family welfare, was not invited to the foundation stone-laying ceremony for the State Medical College at Siddharthnagar.

“Despite our nine MLAs and two MPs, we are ignored. There have been a lot of political appointments, but none of our men have been appointed so far. Dalits and OBCs supported the NDA in 2014, but they are disappointed now,” adds the Apna Dal (S) president, reiterating that if their demands are not met, they can go to any extent.

While BJP state spokesperson Harish Chandra Srivastava dismisses all talk of a rift as rumours and seems confident that the alliance is firmly in place, political observer Prof Badri Narayan feels that if both the SBSP and Apna Dal (S) choose to leave, it would be a setback for the BJP.

Analysts say allies are alienated by the way the BJP functions. Citing the party’s constant run-INS with its oldest ally, the Shiv Sena, Sanjay Kumar says the two parties seem to be on the verge of a break-up this time. “None of the ­allies are happy with the BJP, thanks to the style of functioning of the PM and the party president,” says Kumar. As the spat bet­w­een BJP and the Shiv Sena intensifies, the possibility of an alliance for the 48 Lok Sabha seats in Mah­arashtra is fast receding.

Airing his party’s disp­l­easure over the BJP’s highhandedness, Sena MP Anil Desai says his party never minced words in criticising the saffron party’s wrong policies. “As an ally, we were never consulted on many important decisions, whether demonetisation or GST. The state and central governments failed on many counts to deliver on their promises, resulting in agrarian distress, unemployment and many other issues. Being the bigger party, it is the BJP”s responsibility to fulfill the people’s mandate, though we are also answerable to the electorate as an ally,” says Desai.

“NDA in 2019 will be much weaker than NDA in 2014. Modi was the glue then. That factor is missing now,” says CSDS director Sanjay Kumar.

While the Shiv Sena has been vehemently attacking the state and central governments on many fronts, the BJP too recently hardened its stand, with national president Amit Shah threatening to go solo in the elections. Reacting to the BJP’s exhortation to its cadres to aim for 40 seats without the help of the Sena, Desai says his party will tackle it in its own way. “There are different ways to go about being in a coalition. But if you are openly exhorting party workers to defeat us, we have our way of handling it. Our leader Uddav Thack­eray will take a final call,” he says. With the Congress and the Sharad Pawar-led Nationalist Congress Party reaching an amicable seat-sharing arrangement, the road ahead in Maharashtra is not going to be smooth for the BJP.

Another of the older allies of the BJP, the Shiromani Akali Dal (SAD) in Pun­jab has been voicing its displeasure over the saffron party neglecting the smaller parties. Drawing parallels with the Atal Behari Vajpayee era, Rajya Sabha member and SAD leader Naresh Gujral says uneasy relationship with allies doesn’t augur well during election time. “The BJP should be more magnanimous towards small parties and treat them with more respect,” says Gujral, adding that the style of functioning of the PM and the BJP president is the main reason for allies to snap ties with the NDA.

However, Bihar looks promising for the BJP with the NDA alliance in place, says an analyst. Though the BJP managed to retain the Lok Janshakti Party in its fold after a hard bargain on seat-sharing, it was a face-palm mom­ent when the other ally, the RLSP, chose to join the mahagathbandhan—the anti-­NDA grand alliance.

We Have A Settled And Balanced Team That Will Be Competitive Anywhere: Sachin Tendulkar