Missing in common images of the 'kisan', not counted by economists, not found on property papers. Recent events put the focus on the silent workforce of our farms. 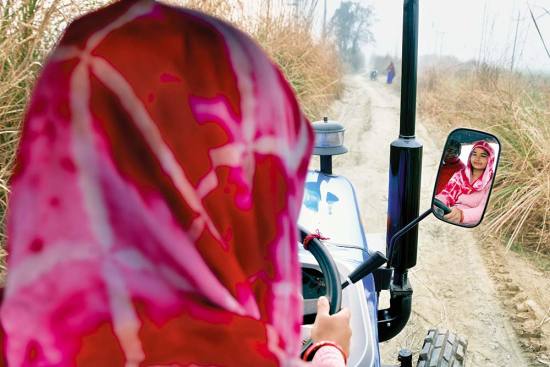 This is India’s shameful secret, as it is the world’s. The ‘formal’ economy—where human toil and its fruits are counted and put on graphs—has always had an area of darkness. A very large area that it pretends doesn’t exist. “Women hold up half the sky,” goes the revolutionary phrase. What it really means is that they till and sow and tend to half of earth, toiling just as hard as men—if not actually more. We wouldn’t know. No one has really counted. It’s invisible labour, just like slavery was. ‘Invisibilisation’ doesn’t mean no one can see women working—we see it all the time. The classic image of paddy sowing is rows of women, ankle deep in mud, bent over, working all day, giving birth to our food. Tropes abound.

Women walking miles with pots of water on the head in the arid north Indian plains. Women threshing and winnowing. All of it the subject of art and folk music. Hindi cinema even has a woman with a plough, brow dripping with sweat, as one of its iconic images. But neither Mother India nor traditional songs about Krishna teasing women while they fetch water from the Yamuna changes the way our mind is set: we think of the ‘kisan’ as a man, just like the ‘jawan’. In common metaphor, in calculations of wages and the GDP, in thinking legally about who owns the earth, we erase the daughters of the earth. It is here, after we ­extract the fruits of her labour, that we make her invisible.