The Amazon and Aarey, Nilgai And Nero

Is a nilgai on a Delhi street an illegal immigrant? Or are we not asking the right questions of science and ethics before enforcing our will on wild animals? 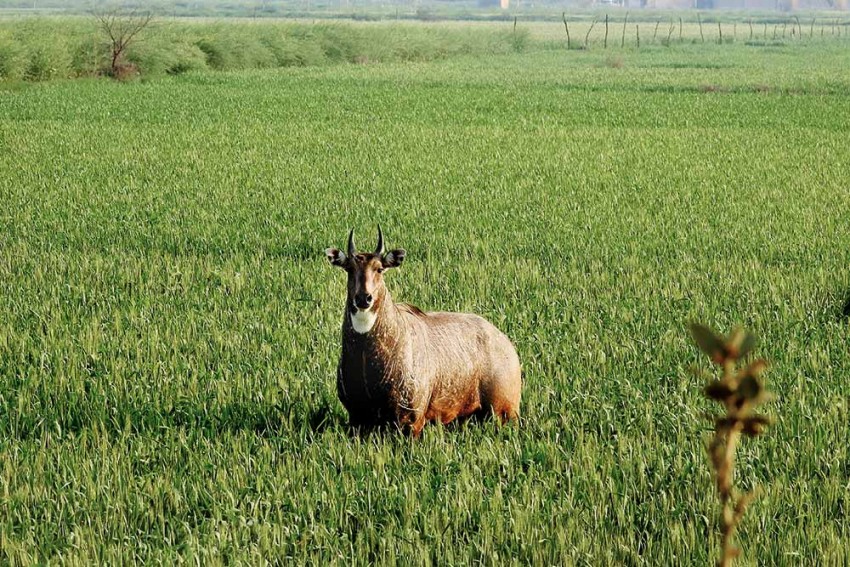 Not A Forest Species
Calling a nilgai a pest for being outside the forest is like calling out a fly for flying
Photograph by Neha Sinha
Neha Sinha October 16, 2019 00:00 IST The Amazon and Aarey, Nilgai And Nero 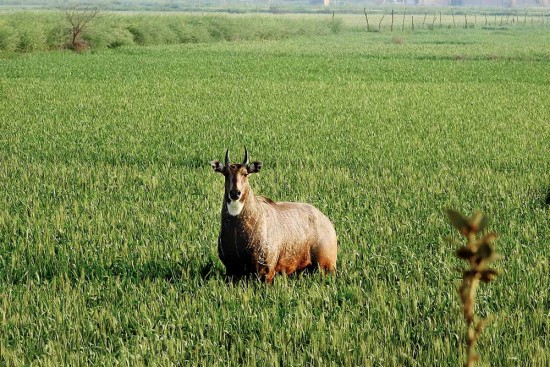 It was nearly four years ago—on December 1, 2015—that the central government put out the notification. “Overpopulation of nilgai and wild pig in areas outside forests” was causing damage, it said. Thus, the state deemed it necessary to “balance local populations of these species to mitigate damage to human life, crops and other properties”. So, nilgai and wild pig were declared vermin for a year. This meant they could be killed—by hunting or other means. Rather nonchalantly, the notification also added that this was being done for “ensuring conservation of wildlife in the forests”. Four years later, Bihar has extended its hunting efforts, putting out another culling order in January this year.

And in September, a video emerged that shocked the nation. In the video, we see a large male nilgai standing near a dug-up pit near some fields, calling out pitifully. It has been injured and shot at, though this is not immediately obvious. On cue, a large mechanised crane arm appears in the frame. The arm pushes the nilgai into the pit—a grave, really. The animal falls in, like a ball down a pool table. The crane then sweeps up swathes of mud and throws them on the living animal. This is done coolly and mechanically, as if a field is being ploughed. Like a premature burial fit for the titular character from Edgar Allen Poe’s The Telltale Heart. The animal is still crying, its cries audible even from under the mud. Soon, there is nothing to see. The cries are faint, the story ends there. 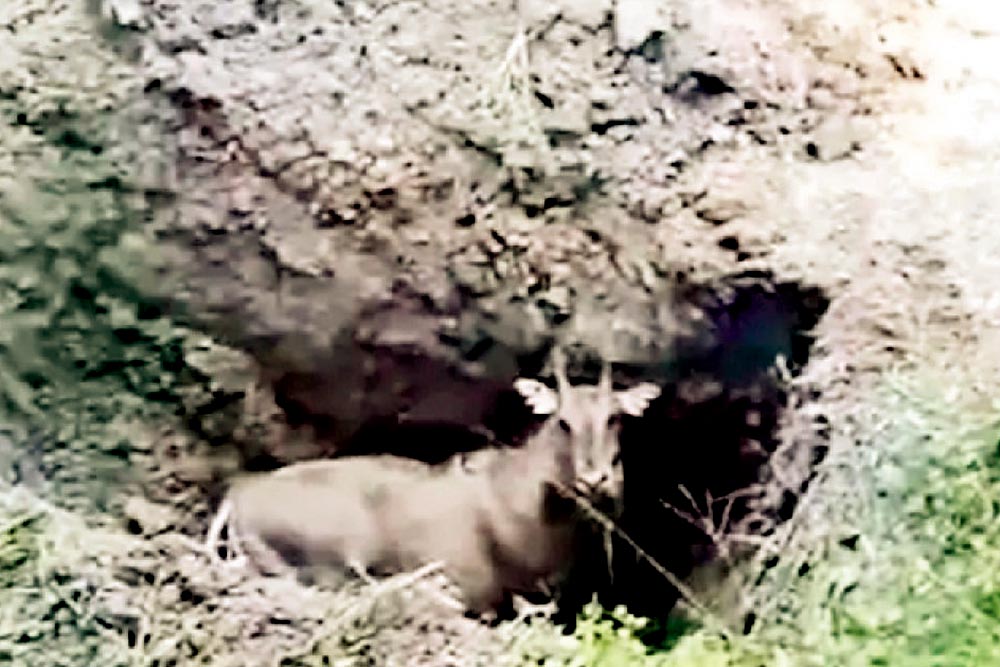 The burial of a live nilgai caught on ­camera, Bihar.

It was a classic case of human will against a wild animal. To enforce its will, authorities bring in ­mechanical clout, firm and unyielding steel muscle-­power against the terrified sinew of a cornered animal, one that only wanted to fly from the scene. And any accusations of sadism and torture become yesterday’s news.

Hunting of most wild animals is prohibited in India under the Wildlife (Protection) Act, 1972. The exception are species that are termed vermin (seen as pests), such as cockroaches and bandicoot rats. Further exceptions can be made under the Act, allowing ­killing of animals proved to be a danger to life or property. There has been a longstanding demand by farmers to reduce the impact of wild animals that cause crop damage regularly, these include nilgai—Asia’s largest antelope—and wild pig. In 2016, it was reported that Goa was also considering putting peafowl and Gaur on the list; at the same time, wild pig were culled in Maharashtra and Telangana apart from Bihar. It is easy to see why so many states consider pig and nilgai to be a menace—both regularly eat crops; nilgai often come in small herds, jumping over barriers erected to keep them out, especially at night. 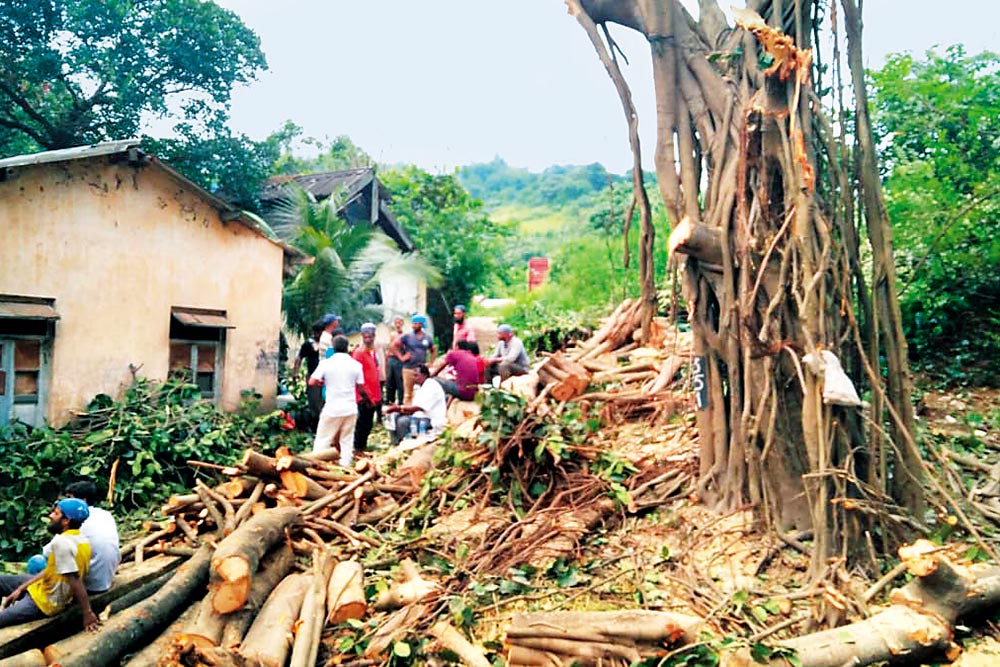 Clearly, there is a problem, but are we looking for solutions? The nilgai becomes an interesting case study to understand some fundamental questions. Firstly, nilgai “outside forest”, as the 2015 notification put it, is a misnomer. A nilgai is a large, spry antelope. It eats herbs and grasses, has powerful legs with dainty white speckled feet, and crucially, is not a forest species. Instead, the nilgai inhabits scrub forest, savannah grassland and lightly wooded areas. You won’t find nilgai in Kerala’s thick tropical forests, but you may find it trying to cross the road in Delhi, or getting “rescued” from the lawns of Rashtrapati Bhavan—because the Aravalli hill range’s scrub, spiny forest is natural nilgai habitat. Calling a nilgai a pest for being outside the forest is like calling out a fly for flying. If we want solutions to the nilgai “menace”, then we must ask the right question. At least part of that question would entail understanding the nature, biology and habitat preferences of the animal. It’s also important to consider the nilgai question as the species is end­emic to Asia, now found mainly in India and Nepal. What we do to the nilgai here is thus a determinant towards the global population. And as grasslands disappear and become cropland, the antelope standing in the crop field is less of a surprise—and more of a consequence—of land use change.

There is a second, related aspect to the fundamental question of finding solutions. While the wildlife act allows culling, the same law also inv­okes the idea of good faith. It says, “the killing or wounding in good faith of any wild animal in defe­nce of oneself or of any other person shall not be an offence.” The Latin translation of good faith is bona fide, and it refers to a kind of honesty and reasonability that implies no malice is intended. This is a subjective concept, an exploration of how one ought to act, rather than how one must act. If a tiger charges at me and I plunge a knife into its heart (possible, though not probable, for my level of fin­esse), I will not be prosecuted. Officers making mistakes while carrying out their duty are let off in good faith. But if we examine good faith in principle rather than the letter of the law, killing temporary vermin through mala fide cruelty like live burials is not how the ­exercise ought to be. 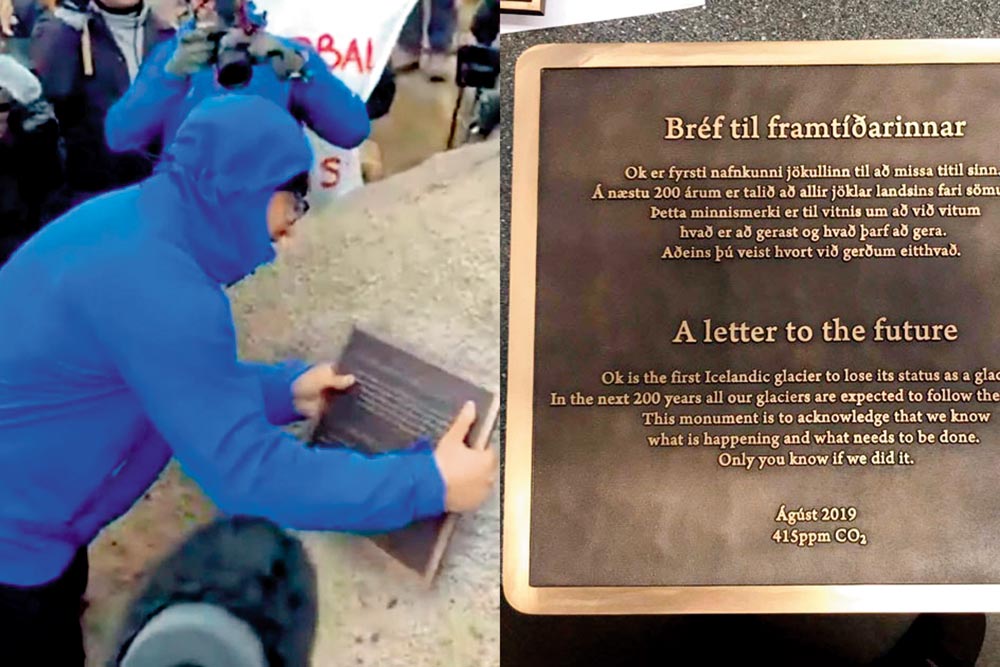 Funeral for the Okjökull glacier in Iceland.

This is not a question of Bihar alone, where the nilgai was killed after taking administrative permission (on the heels of several hundred others being shot or killed). It is also a question other states must answer. What is legal may not be right: the manner also matters. The Bihar order for culling from this year, for instance, calls for a “daksha shikari” or skilled shooter to shoot the ­animals. This is an indication that the effort to kill, bloody though it may be, ought to be executed with precision and ­efficiency rather than with an any-way-­will-do approach.

To be able to deal with nilgai or control its population, we need baseline studies of populations to see where—and if—the animal is “overpopulated”. We will need to study where land use has changed to perceive patterns of movement. Translocation of animals and contraceptives for them are options that can be looked at after these studies. Finally, if we ­decide to cull, which method should be used is a blazing question. Shooting randomly is not a solution. It also leaves wide open the question of what one does after the culling period gets over. Would the closed season lead to illegal gunfire and more hasty burials? 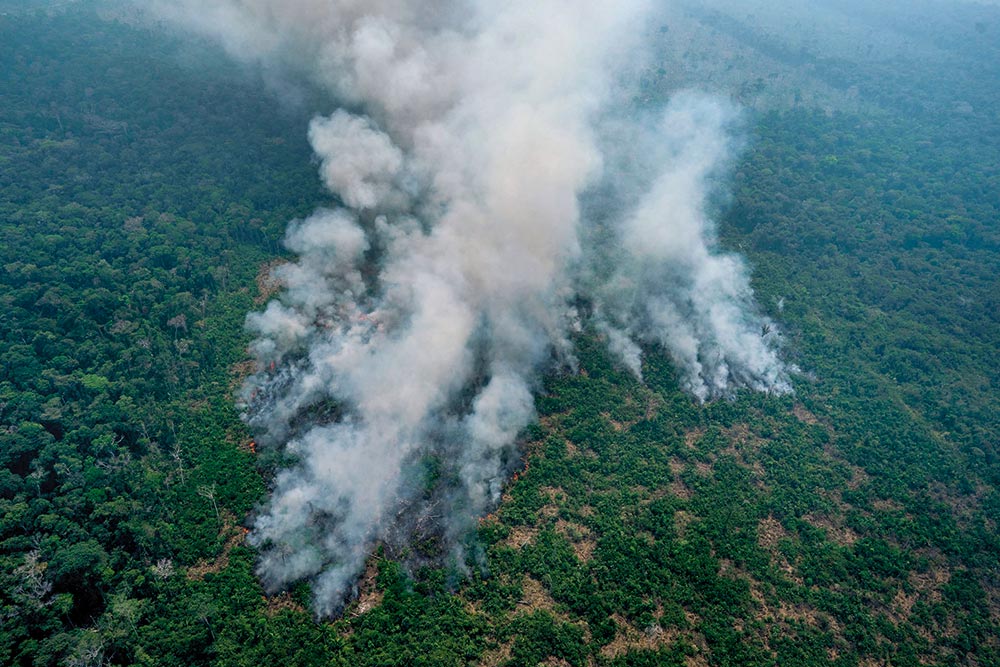 The Amazon rainforest saw over 80,000 fires in August.

The order makes a forced equivalence between the need to shoot an animal outside the forest and conservation of animals in the forest. This is also a species-level approach: one that is not targeting rogue nilgai, but all nilgai, or hundreds of nilgai, in a single order in one district. This blanket approach can snuff out decades of conservation efforts centred around tolerance and morality. Can we try instead to offer solutions that are nuanced and create pockets of habitat for a non-human resident? I see a nilgai standing in Delhi and I declare it an illegal political immigrant. I see a nilgai stan­ding in a crop and I declare it a pest. Before I call it out, I should see how many lives it has left on the countdown of extinction, and how many habitats I can fit it in; this seems fitting relative to my size of brain. I should also address these questions, if I am taking upon myself the responsibility, and not just power, of using the word ‘vermin’.

But asking the right questions is seen as creating an inconvenience that has institutions frowning. As Brazil’s intricate Amazon forest burnt (over 80,000 fires in August 2019), President Jair Bolsanaro made jokes about Nero and his fiddle. Environ­mental activism particularly is being met with a conservatism that is (ironically) directly proportionate to the scientific merit of the question in hand. The wide backlash against Greta Thunberg, a 16-year-old Swedish climate change activist, is marked by questions of what-does-she-know as well as allegations that the Left is using a minor as a prop. Ironically, the same thing is mirrored in India. Residents of Mum­bai have been fighting for years to save Aarey, a patch of forest near Sanjay Gandhi National Park. Parts of Aarey forest have been cut for a metro rail shed, and citizens have gone to court, and conducted protest marches in rain and good weather. Children too have joined in, the premise being they don’t want to lose a green lung. This has been met with cynicism and disbelief. The National Commission for Protection of Child Rights has asked the Mumbai education department to probe whether children are being forced to participate in protests. 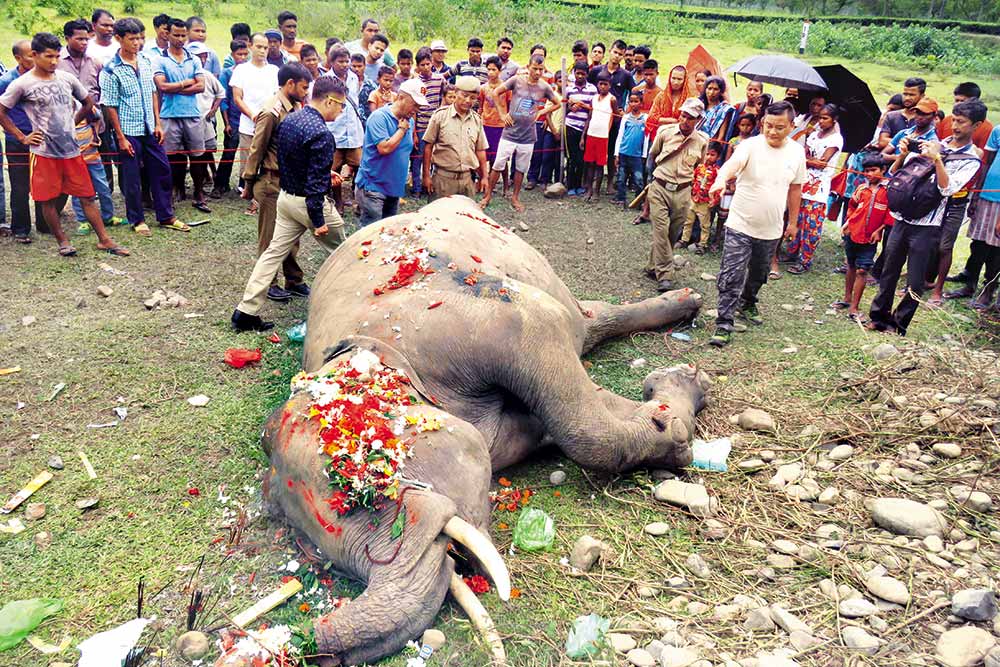 An elephant killed while crossing a ­railway track near Siliguri.

At the root of the idea of ‘public interest’ lying solely in governmental projects—but never in the protest of a young, vulnerable citizen—is the thorny fact that young ­people are speaking loudly to power. The narrative is a child can’t have a stake in ­environmental governance, never mind the foul air she is forced to breathe. But perhaps what is most unsettling for critics is the fact that protests such as Extinction Rebellion or Climate Strikes are rooted in the reality of a sooty urban existence, as well as scientific fact.

Perhaps all environmentalists, teenage or ­otherwise, would be happy to know that more than a hundred people mobilised in Iceland for a funeral. This was a funeral for Okjökull: one that was meaningful, and also one that should never have happened. Okjökull was not a person, but a huge glacier that completely melted in Iceland—the first to do so.

All questions of our conflict with the environment—whether wildlife, climate, or keeping trees standing—need to be answered with science and evidence. They also need to be met with the principle of good faith. We need to look for scie­nce, and then ethics, because history tells us the two should always go together.

(The writer is with the Bombay Natural History Society. Views expressed are personal.)