Symbols In Sasi Cause And Effect 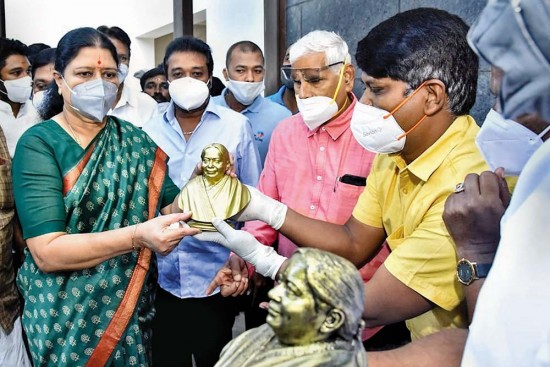 Tamil Nadu’s political canvas is strewn with symbols of various forms and sizes—statues of past leaders, their samadhis visited mandatorily on their death anniversaries and even their former homes. Sasikala Natarajan’s return to Chennai brought two more symbols into focus—the AIADMK’s flag and the party coloured long shawl worn around her neck.

In defiance of threats and police complaints she rode back to Chennai in a car that sported the AIADMK’s flag on the bonnet and the shawl remained in place whenever she stepped out to pray in temples or at AIADMK’s founder MGR’s residence in a Chennai suburb. The two other symbolic places she had planned to visit—the samadhis of MGR and Jayalalalithaa and the Poes Garden residence, now converted into a memorial—had been hurriedly closed down by the AIADMK government.