Shoot Me With A Slogun

If politics is in our blood, the slogan is the pulse. Its rhythms aren’t partisan­: they create a community of words. 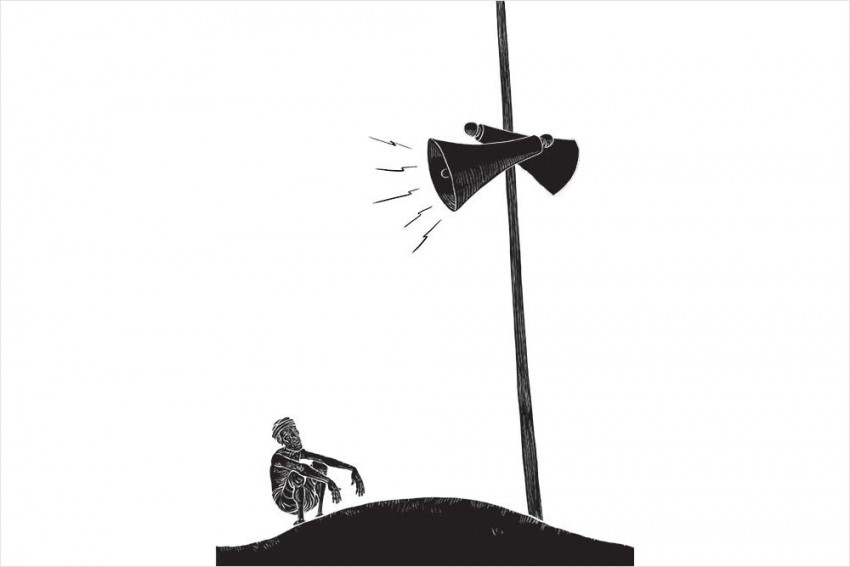 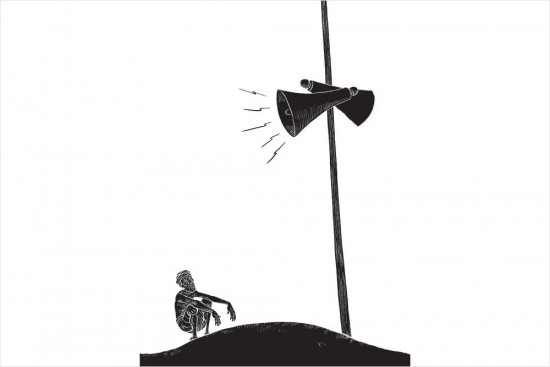 In 2014, after Narendra Modi had run off with his juggernaut of a victory, casting rival political actors into a kind of existential dread and plunging non-believers into stupefied silence, there was a joke that tried to lighten the gloom in some quarters. It’s a beguiling little sketch. On a grassy knoll somewhere in communist heaven, Charu Majumdar turns to Kanu Sanyal and Jangal Santhal and says ruefully, “Comrades, we missed a trick back in the Sixties. All we had to say was…Agli Baari Naxalbari!” This comic inversion—with its wry echoes of the old crowd-rouser ‘Amar bari/Tomar bari/Naxalbari, Naxalbari’ (My house, your house, Naxalbari’)—tells us something. Slogans speak, but sometimes they also seem to listen. Because they inhabit a shared territory. Of language and its mysterious ways. You and I may be on the opposite sides of a fence, but that fence runs across the same planet of words. And no repeal of a treaty, no Brexit, no Iron Curtain, no political splintering can ever fully debar words. They fly in and out like Siberian cranes, never trapped by the changing political maps down below. Beca­use of them, we will always exist in a transaction of thoughts—for words have a Schengen visa.

It seems tricky to make a case for ‘ideas sans frontieres’ in times of bitter political divides, when we stand at the cusp of elections where words are mostly being hurled at each other like rocks. Also, when election slogans span a strange gamut—from an encapsulation of a people’s deepest political feelings to the anodyne lure of an advertisement catchline, a marketing tool (see Angry Kya?). Regardless, a case exists. A nation is not made by nat­ivity or common genetic markers; it is not a natal ward. A nation is composed of its conversations. Yes, democratic politics is agonistic by nature—we oppose and battle each other, we are protagonists and antagonists. But the mode we rely on to be political—argumentation, tark—is the same. We persuade, dissent, accept, reject, bargain, change our minds. And a slogan is the most distilled, most concentrated form of a political argument. That’s why, leafing through our library of slogans since the ’50s, we can trace a whole history of Indian politics—its evolution, its multiple actors, its various layers (see Our Oral History).

But why slogans? Aren’t they the basest form of words, hard shells leached of all thought? Don’t we often say, “Oh, he’s reduced it to a mere slogan”, or “they do nothing more than mouth slogans”? Implying a diminution, like great leaders turned into statuary, mere tok­ens. This is greatly reductionist, because it neglects what they are. A special kind of linguistic artefact, neither prose, nor poetry, but with an incantatory form and exhortative force that approaches the latter. It also neglects how they work. There’s a curious bidirectionality here. Imagine two types of slogans. One where we directly add­­ress the opponent, as in ‘Simon Go Back’ or ‘Quit India’. The other shouted out at one’s own, a call to arms meant to energise, to rouse one’s flock from apolitical sloth, or as a fraternal badge (the Santhal war cry ‘Hul Johar!’, or the Left favourite ‘Ho! Ho! Ho Chi Minh/We Shall Fight, We Shall Win’, or ‘Jai Bhim’). But strangely enough, regardless of who it addresses, the perlocutionary effect of a slogan is felt by all. None of us can escape being moved by the rhythm of chants, it speaks to our capacity to be part of a larger being, a flock, it collectivises us via a kind of ecstatic transport. Even for a neutral listener, a kind of identification process is inevitable: it makes you see others as they see themselves. It works on you even if the content isn’t to your liking. At its limit, even a hostile mob’s slogans striking dread into you as you cower on a balcony isn’t an argument against it; indeed, it testifies to their sheer elemental force. You are not unmoved, quite the opposite.

How then, if a slogan can be a sign of your impending slaughter, can they be even conceived of something that maps out a shared territory? Partly because we respond to them at a fundamental human level, a space before formal politics. Take the Charu Majum­dar/Narendra Modi joke, since you cannot conceive of a wider gulf between two political personalities. Now, the transposing of words from one extreme of the political spectrum to the other ext­reme is not exactly an unknown phenomenon. The slogans that cause the maximum disquiet, a visceral rejection, in the mainstream Indian mind are the incantatory, call-and-response words of the Kashmiri ‘Hum Kya Chaahte/Azadi’. But we have seen those words travel all the way up to a BJP campaign video.

This came about via the good offices of Kanhaiya Kumar (a budding career built on slogans!) and his creative mutilation of the original’s intent. The vital break he made was to supply ‘azadi in India’ in lieu of ‘azadi from India’, then he went on to list a whole ecumenical charter of revolution…“Woh Bhagat Singh ki, Azadi/Ambedkar waali, Azadi/Woh Phule waali, Azadi/Periyar waali, Azadi’…with all the lusty charm of a pavement hawker in Janpath. Or indeed, the identical form employed in ‘Zor se bolo/Jai Mata Di’. The spectre was haunting enough for the BJP to try to turn it on him. Mayawati’s 2007 inversion of her own old slogan to ‘Haathi Nahi Ganesh Hai…’ mirrors this in some ways. At a subtler level, revolutionary slogans ironically often carry strong echoes of ideas consecrated in the feudal age—valour, honour, revenge.

The poet-scholar Rukmini Bhaya Nair has a fine thesis on this species of words—to wit, that two-word slogans work best (see Towards Two Words). There are many exemplars, from ‘Jai Bhim’, the Sufi ‘Ana’l Haqq’ to the Rastafarian ‘Jah Rasta!’ Exceptions abound too—single-word (the anti-apartheid ‘Amandla!’) to three-word (‘Raj Karega Khalsa’). But one place where it completely breaks down is Kerala. A verbose people, perhaps, their slogans are long, multiple-word chants, often agglutinated into almost a single utterance, and viciously alliterative. Take the ‘k-k-k’ in ‘Vidyarth­ikale thottu kalichal/Akkali theekkali sookshicho’ (If you play with students, you play with fire), or the repeating nasal ‘n’ in the cou­nter ‘Indira-vannittenthu-paranju/Vidyabhyasam vendenno?’ (What did Indira come and tell you, that you need no education?)

The year was 1959, one of great ferment in Kerala, with the wor­ld’s first elected Communist government facing an angry backlash from the Church and Nairs. My mother, a girl of 13 then and yet to grow to her full glory of four feet nine and a half inches, would hop, skip and jump across a sylvan landscape of coconut groves and paddies in rural Thrissur to a convent school two miles away. The ‘Sisters’ used to make the kids march down village roads shouting slogans of the vim­ochana samaram (‘liberation struggle’). So she was willy-nilly a child warrior, too young to understand the war. But she remembers the words even sixty years later. Some rousing: ‘Angamaly kallarayil nammude sodarar undengil/akkallar­ayaanee kattayam/Pakaram njangal chodikkum’ (If it’s our brothers who lie in the Angamaly stone-grave, we do swear revenge upon that grave). Some funny: ‘Mundasseryude mandayil entha/chakirichoro charayo? (What’s in the education minister Joseph Mundassery’s brain/Coconut husk or arrack?) Some ribald: ‘EMS-e Thomaas-e/Gowrikkethra maasaayi?’ (Hey, EMS and T.V. Thomas, how many months gone is K.R. Gowri….) The appropriateness of Church fathers getting young girls go around mouthing this is bes­ide the point, call it God’s Own Politics. What we have living amidst us is a great sonic and lexical archive.