We scroll past a frightening number of images every day but only a few storm into our consciousness and get shared far and wide. These viral images might never see ink or paper, but do they say anything? India’s foremost photojournalist Raghu Rai takes a serious look at some of them and tells us, besides speaking his mind on the state of photojournalism in India today. 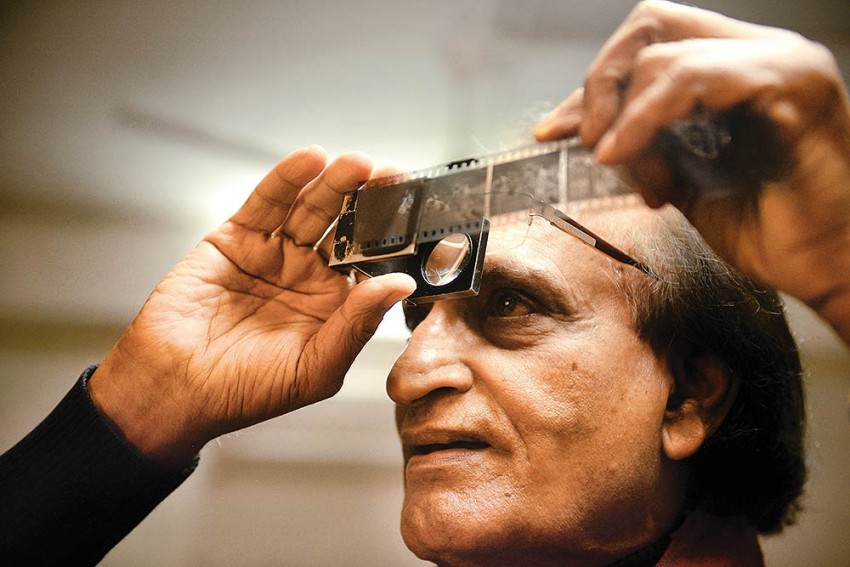 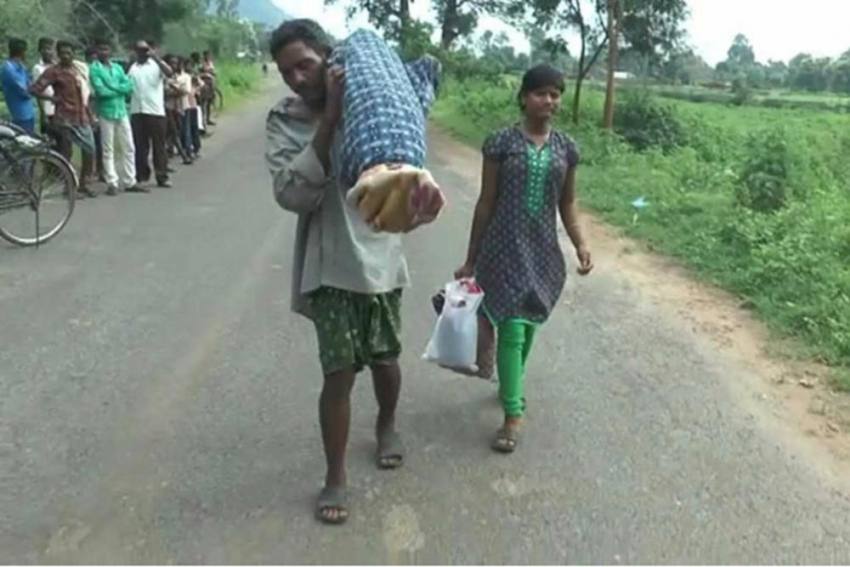 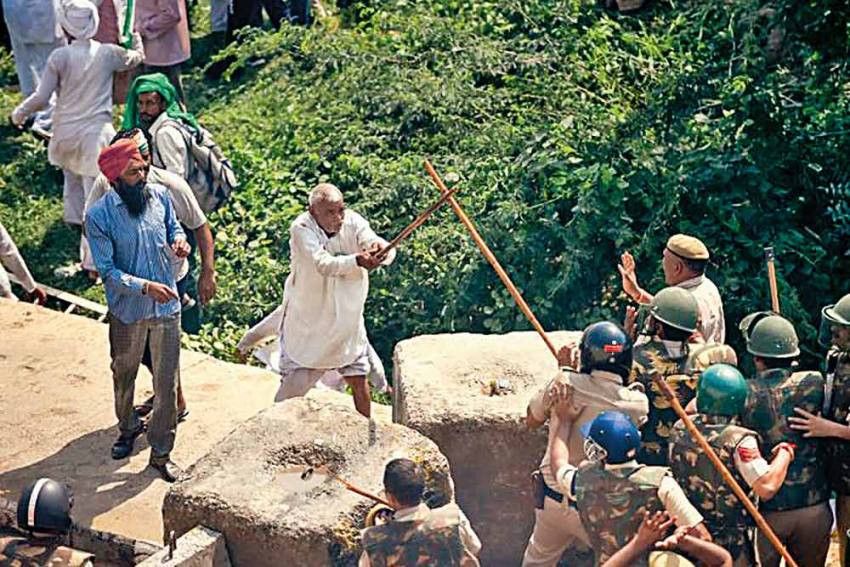 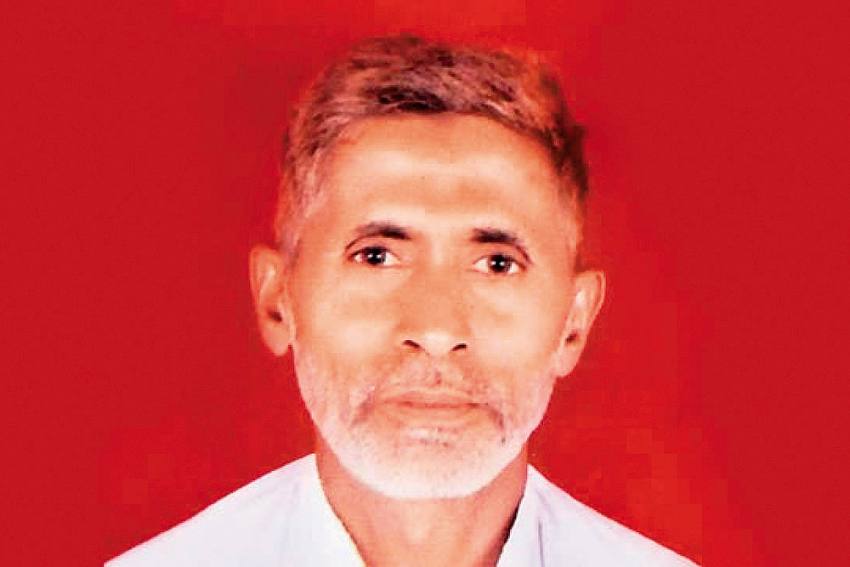 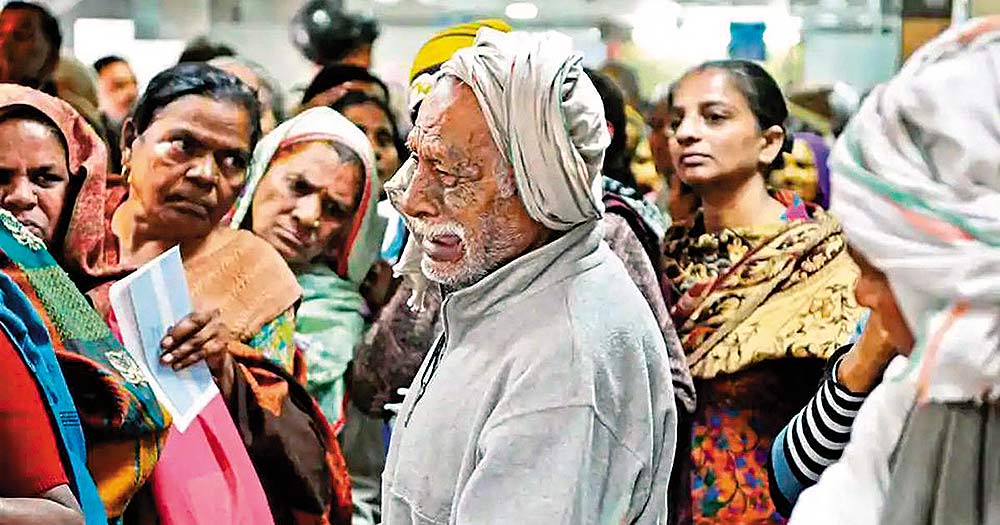 An old man cries ­outside a bank in Gurgaon after demonetisation 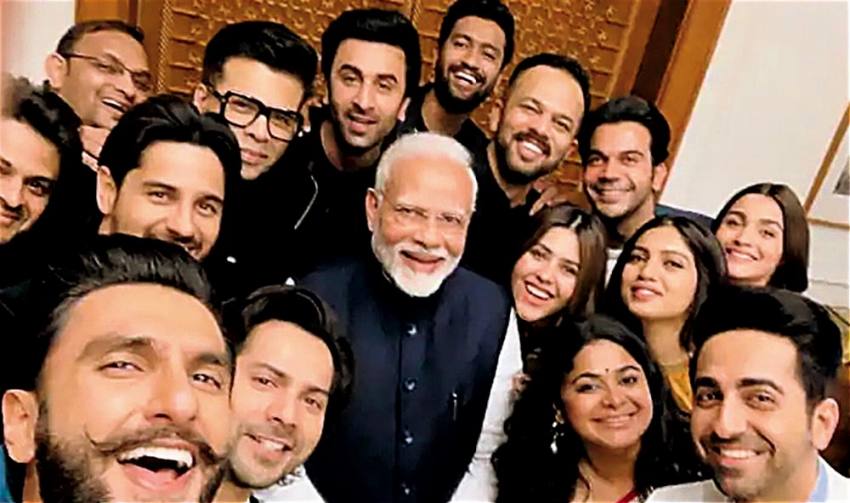 Bollywood stars take a selfie with Modi in January 2019. 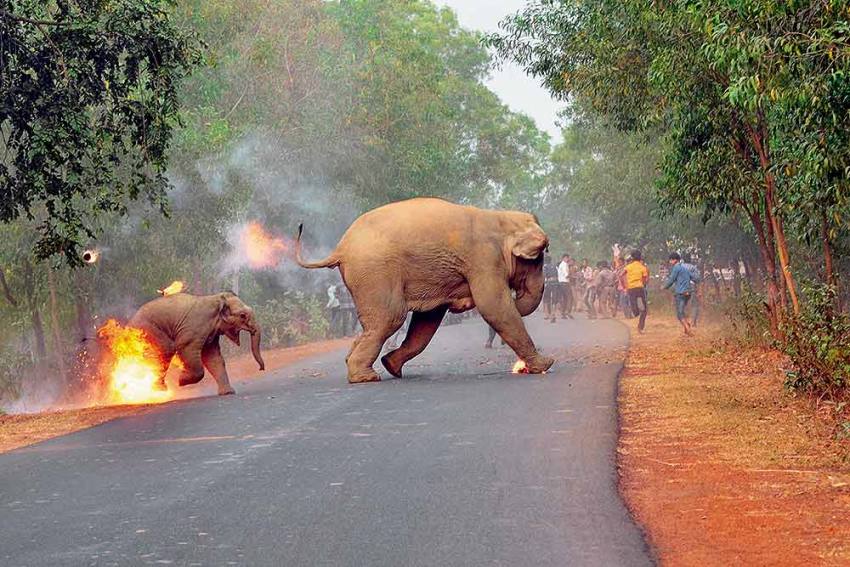 Human-animal conflict in West Bengal, 2017. The ­calf survived the fire bomb, but not many do. 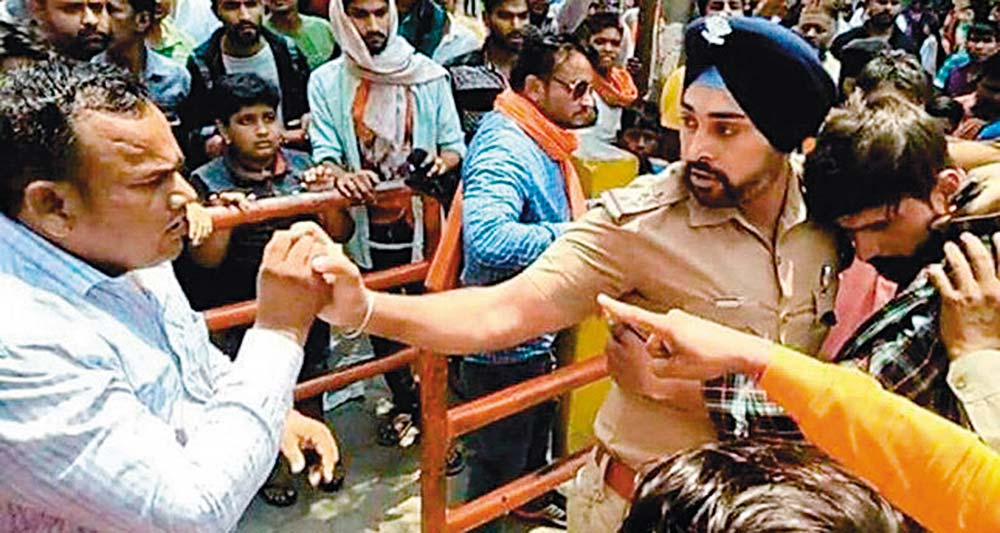 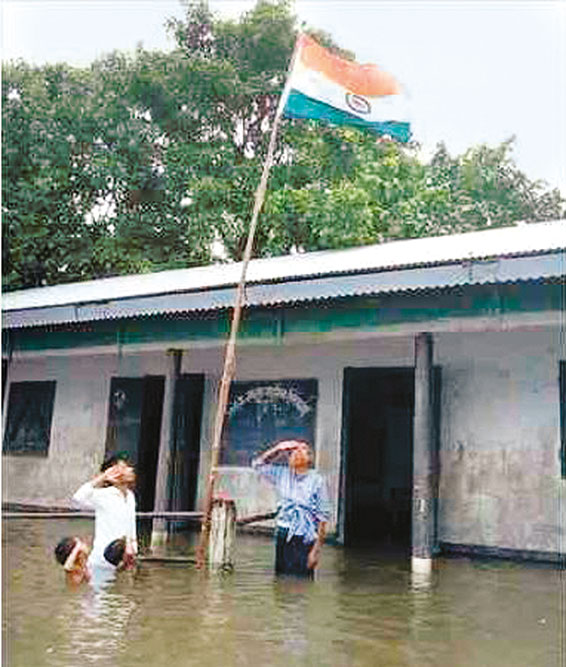 Saluting the flag on Independence Day in flood-hit Assam (2017) 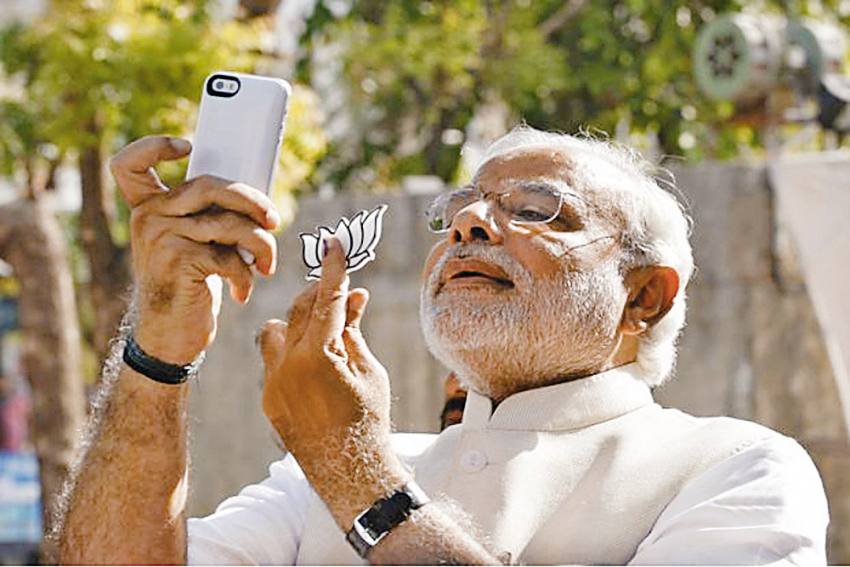 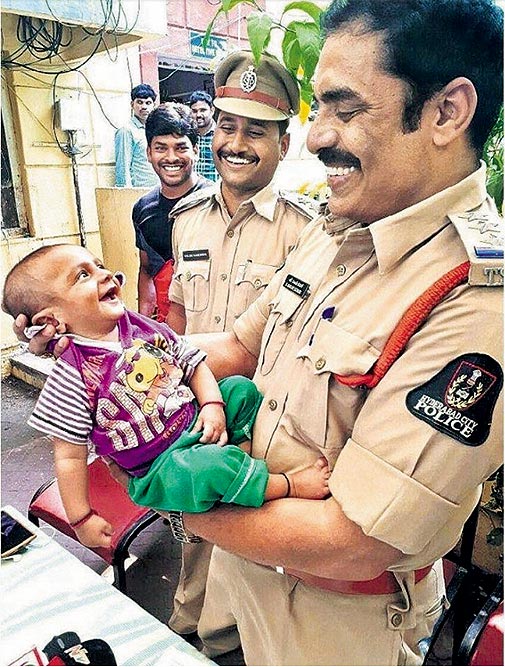 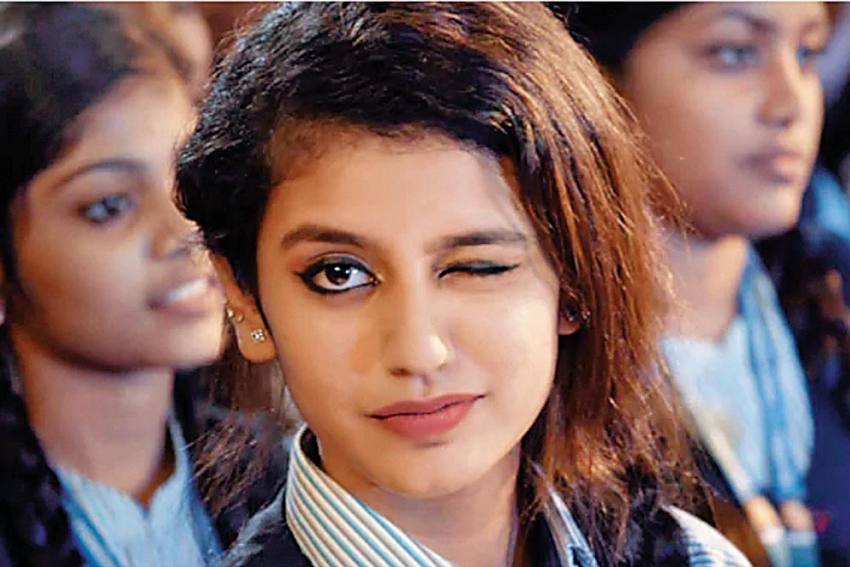 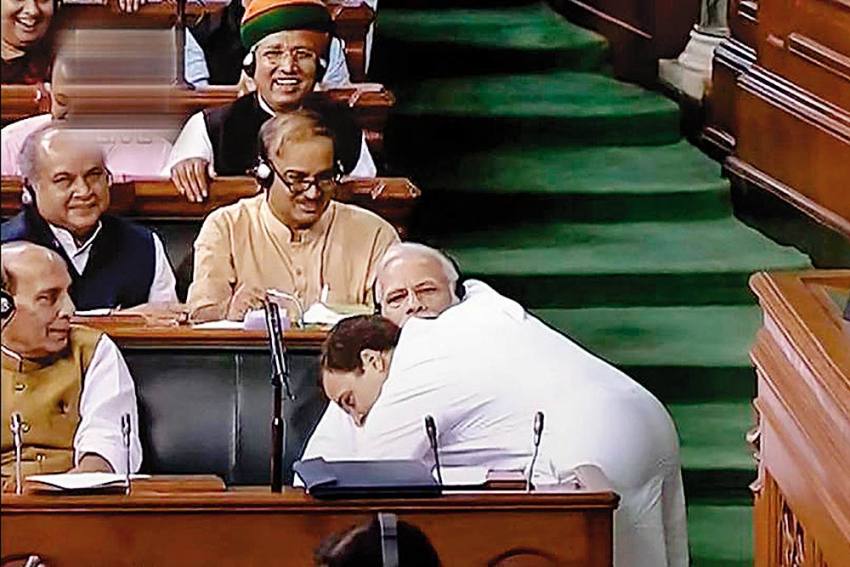 Well, they say journalism is the first draft of history. If journalism is the first draft of history, photojournalism is the evidence of that draft – who we are or who we were. Most of us today don’t have the patience or the sensitivity to look at images, into the images, every element therein, every body language, every expression, and fathom what it means. The consumers of electronic media, where images are being bombarded one after the other, are particularly uninterested. The flickering screen doesn’t let you focus at the moment – the moment that says what needs to be said. These still images are here to stay, as a visual history, and a witness to what it was. History is written and rewritten but visual history is something that cannot be rewritten. It is the final evidence, and a simple clean mirror to where our nations stand today.

It is also unfortunate that the editors and wordsmiths of newspapers and magazines think their words matter a lot more than anything else. The next in importance are ads because money is to be made. So the photograph is the first casualty – reduce the size. In addition, most photojournalists today tend to be more of professional photographers who provide photographs of different events and situations. They don’t become explorers who’d want to go deep into the essence and meaning of the story. This is one of the reasons why photographers are not given that importance in terms of editorial say and print space. A true photojournalist must not just remain informed about the happenings of the day and the news stories, but should have the learning and the wisdom to choose the right moment in its rightful relevant space. Only then does a photograph become an image of power and strength. 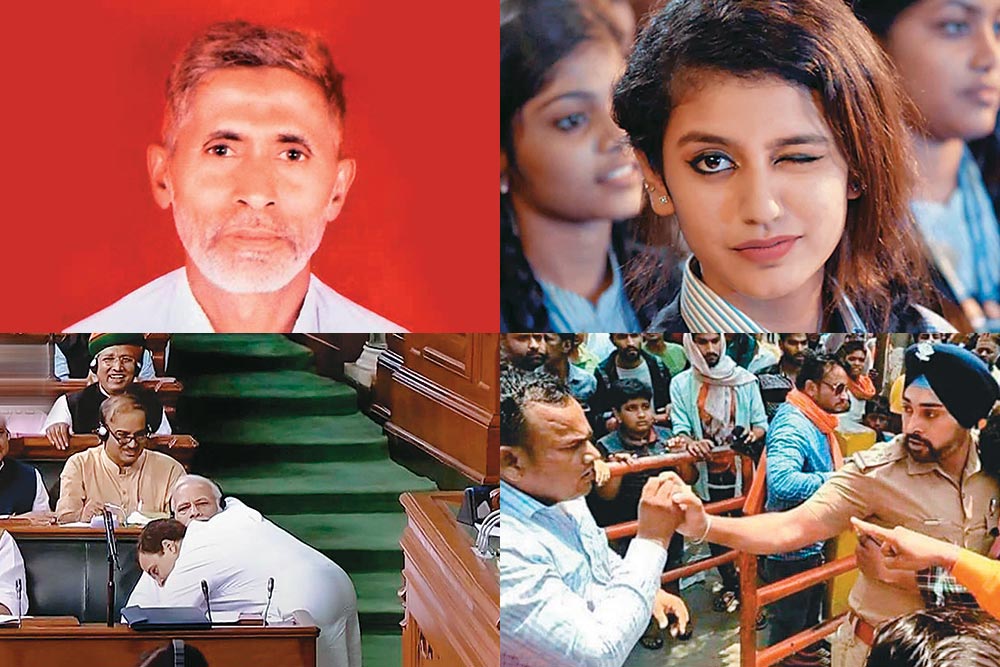 Now bulk of these photographs are more of snapshots. Rather than being images of power and strength, they are only speaking about the story from their contents. For instance, the portrait of Mohammed Akhlaq is a passport photo. How I wish there was a portrait of him in fear and death. As regards the image of the girl winking, whoever she is, is just a pretty picture of a girl winking. The real meaningful work has to have deeper meaning, like the image of Sikh policeman protecting this man, or of Rahul Gandhi giving a hug to Modi whereas the latter is unmoved. It speaks the moment far more intensely.

The proliferation of camera phones has meant that anybody who is at the right spot at the right time clicks a picture. However, that picture does not have the professional structure and quality required of a resilient image. On the other hand, most of the professional photographers are not so dedicated or mad about exploring and capturing. How I wish the photographers, photography, and image making, were so intense, exploratory, and magical, that it were taken as the final stamp of truth, the hidden truth, that gets conveyed in moments of revelations and happenings.

The text in a newspaper or a magazine is like the brickwork, and a good photograph is a window to the world. But that window must open up your inside, and be such a revelation that it makes you say, ‘Oh my God!’  And that precisely is the responsibility of the sensitive and committed photographer. 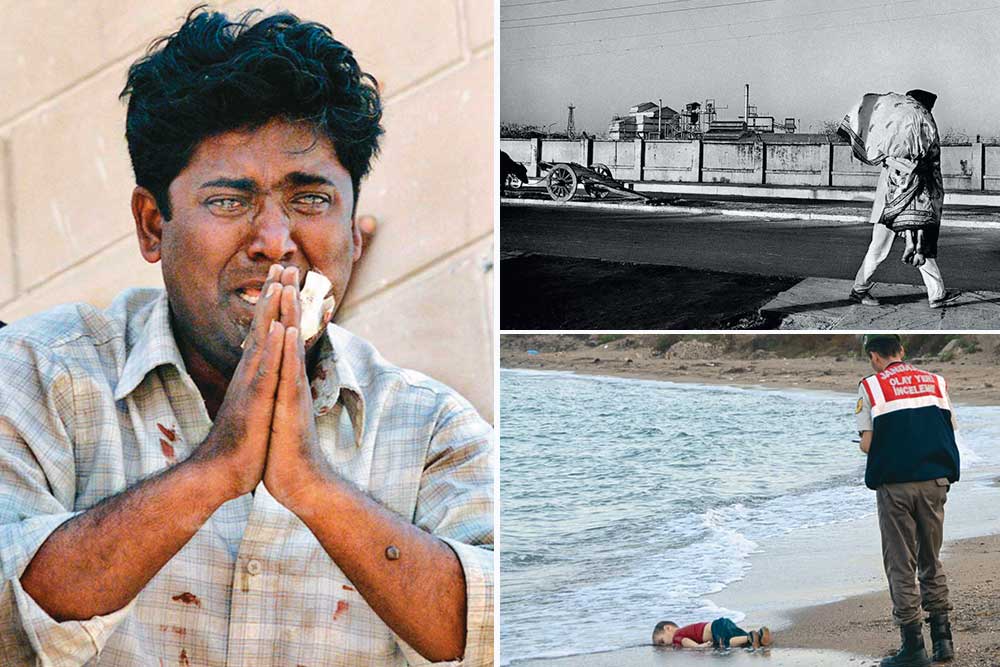 (Clockwise from left) Qutubuddin Ansari, the ‘face’ of the 2002 Gujarat riots; A man ­carrying his wife’s body ­outside the Union Carbide plant in Bhopal after the 1984 gas disaster; three-year-old Alan Kurdi’s death in 2015 became a ­symbol of the Syian ­refugee crisis.

These images that go viral on the Internet do have their own impact, but I’m afraid, the photojournalism in India is, by and large, not evolving and not being given the space it requires. Consider Akhlaq’s photograph for a moment, and measure it against Arko Datta’s photograph of the man pleading with folded hands during 2002 Gujarat riots. The intensity in his eyes was captured with such truth and honesty. The picture I took of the boy being buried after the Bhopal gas tragedy became the symbol of the tragedy. If you remember the image of the Syrian child lying on a shore in Turkey, it was a very moving one too. Even though a serious photographer may not have taken it, the content sometimes is so powerful that the image reaches you at a very creaturely level.

There are a few selfies, too, in the pack. Selfie, by and large, for me, is self-love. Besides, there is so much equipment available these days. As a result, young photographers use extreme wide-angle zoom lenses, or big telephoto lenses, with little respect for the scale – the human scale. Some humans are too bold, some too wide, some are getting very small because they are at the back, and some have their limbs distorted. All these things matter a lot if the image has to survive. 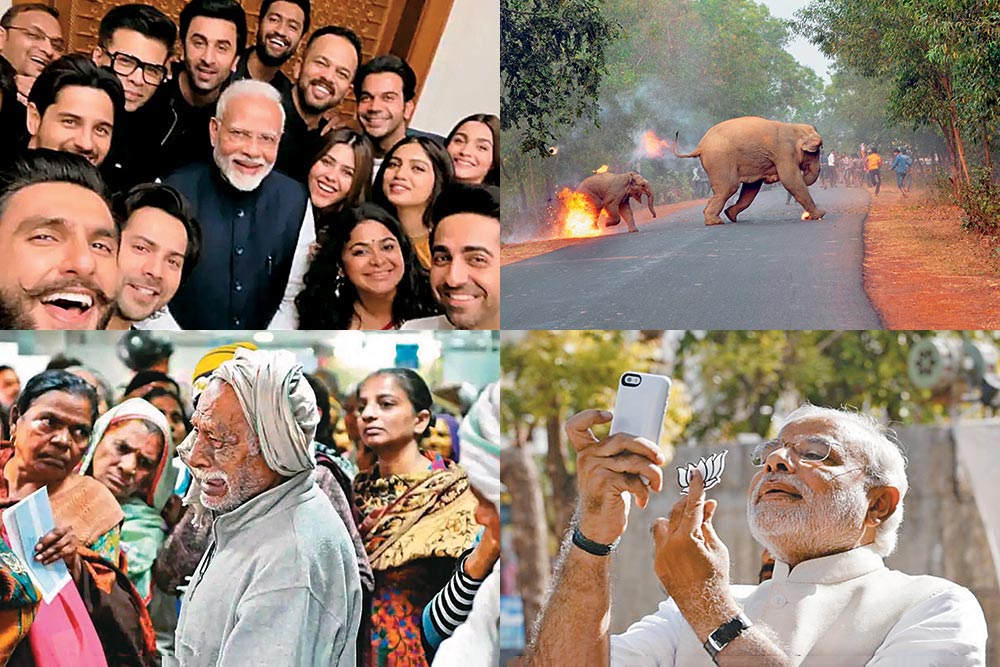 (Clockwise from top) Bollywood stars take a selfie with Modi in January 2019; Human-animal conflict in West Bengal, 2017. The ­calf survived the fire bomb, but not many do; Modi taking a selfie with his party symbol after voting in 2014 and an old man cries ­outside a bank in Gurgaon after demonetisation.

In the visual world, a wholesome statement is made not just by choosing the moment, but also by putting it into the relevant space. People will look at these widely shared images and say, ‘Yes, interesting,’ but they will not become iconic images. They don’t have any lasting value and will fade with time. Consider the image of all these Bollywood personalities posing with prime minister Modi. Honestly, for me, it’s a frivolous little picture. The image of the elephant calf escaping fire is an important one, though. As for the image of an old man crying after demonetization, I’d say it’s not a very professionally done image. And there is one from a farmers’ protest. Why should he be fighting the authorities? There is more violence to any demand today than ever before. But, of course, there are some sweet moments too (the baby and the cop smiling at each other).

The picture of Dana Majhi carrying his dead wife, again, is not telling at all. I had a picture of Bhopal gas tragedy, where a man is carrying his dead wife, her legs hanging, and you can see Union Carbide at the back. That picture has the context, the composition, and the strength to say what it has to say. And the way that man was walking in that photograph – a straight, flat walk – it seemed as though his body and his emotions had all but dried up. And somebody could have just set this one up – these people in a flood-hit area saluting the tricolour; this image doesn’t matter. Surprisingly, I don’t see a photograph of any religious activity here. Today, I see more and more people going to religious places and yet there is more crime and corruption in the country. This is one aspect of India that is very strange for me.

The images here don’t capture the churning that India is going through. The defining ones can’t be depictions of day-to-day happenings. The defining ones have to come from the depths of the human spirit. There are two things in journalism; one is information that newspapers, magazines and TV channels share about what is happening, and the other is to capture the vision of that idea of that substance of that information. So if you, as a writer, capture, the vision, the energy, the ethos of it, then your writing is powerful. Otherwise, you are just logging information.

A photographer has to have that ability to create an iconic image – an image that becomes a timeless expression of how we were. We are witnessing the rise of fast food generation, fast food editors, fast food photographers, who grab a sandwich, grab a piece of news, grab a photo, and throw it at people. Look at some of the TV anchors; they are so aggressive, so ruthlessly arrogant, and they are not sharing news with you. They are throwing that idea of news at you and analysing it the way that suits them.

Me, personally, in 55 years of my career, as a photojournalist/artist has never ever aligned with any political party. As a member of the Fifth Column of the society, we should look at the events and happenings as inner essence of a situation gets revealed so that one can capture the instinctive truth, regardless to say whether this goes against any minister or it helps any one in high position– a true mirror to the society – because truth touches the hearts of everyone including the ministers.

Lastly, there was a time when the wisest and most enlightened people would travel to India for spiritual fulfilment. At that time, European newspapers such as Le Figaro, or Le Monde, or others such as The Times, or the New York Times, or the Time magazine, would rarely write a story on India – maybe once in 3-4 months. Today, every newspaper, every channel, every magazine, has a story on India every few days. You know why?  It’s because we are the biggest consumer market in the world that has opened up for business. And that is our USP today. It’s not because we have become a great nation.

Howdy America: PM Modi Has Lot To Do In US Than Counter Pakistan On Kashmir