The long Nitish-BJP relation has had its ups and downs, especially vis-à-vis Modi, but this may turn out to be the trickiest phase ever. A pyrrhic victory for the seven-time CM. 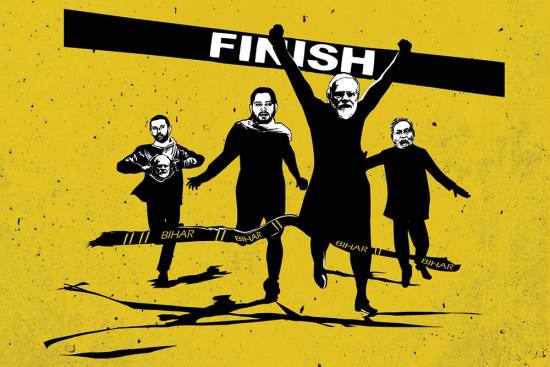 Champagne should ideally have flowed freely in the ruling camp—but of course, there’s prohibition in Bihar. Champagne, you could say, is an impossibly elitist metaphor to deploy in one of India’s poorest states, but seemingly impossible things have been happening here. At the end of waves of rapture going in the opposite direction during the campaign, Janata Dal (United) stalwart Nitish Kumar has returned to power yet again, leading his alliance to a fourth consecutive victory in the state assembly elections. In the next few days, he will be sworn in as chief minister for the seventh time—a feat none of his predecessors could ever boast of. One of the canniest politicians of contemporary India, Nitish may have been arguably too canny in writing himself off from a larger national role that may have been his for the taking—even if this election brings fresh proof of his grandmastery on the complex chessboard of Bihar. And yet, there’s a double-edged nature to this mandate and this may turn out to be an eventful—and internally attritional—tenure.

That’s why celebratory cacophony appears to have been put on silent mode, at least in Nitish’s party. The NDA may have managed to scrape through in a nail-biting finish against a spirited Mahagathbandhan (MGB) led by RJD’s young turk Tejashwi Prasad Yadav, but it has turned out to be a pyrrhic victory of sorts for Nitish. For a towering leader who strode like a colossus both within and outside his alliance not so long ago, statistics vouch for a clearly diminishing clout.