Cho Ramaswamy's 'Thuglak' was the first-ever Tamil political magazine. It continues to be a top draw for its ability to make fun of politicians and their never-ending stories of faux-pas 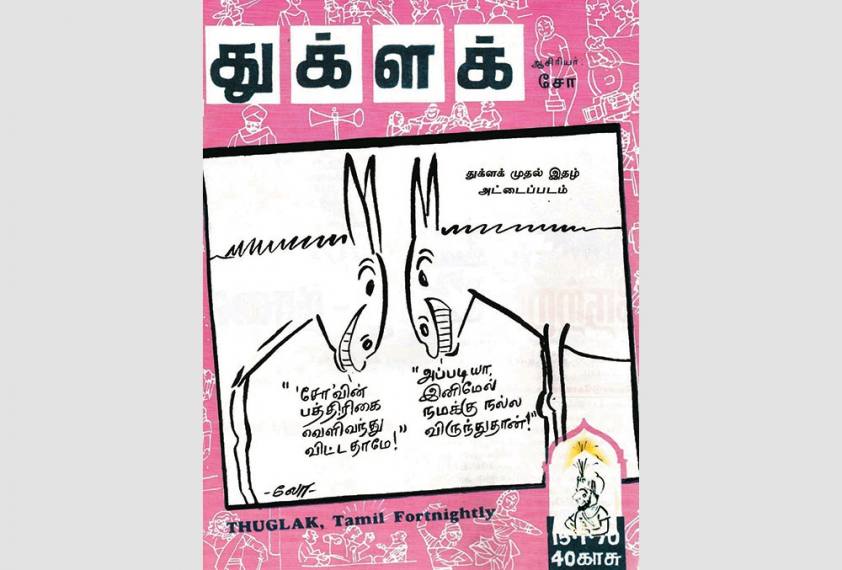 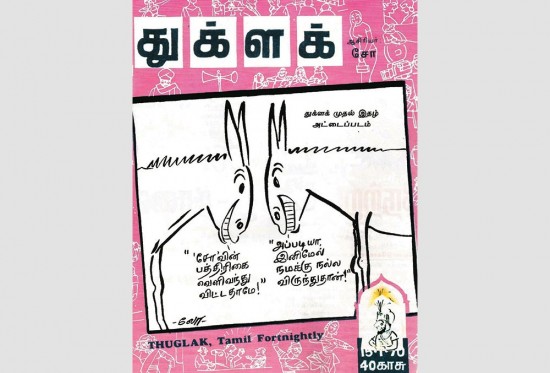 Cho Ramaswamy launched Thu­g­lak in January 1970 with a cartoon of two donkeys on the cover, promising them a steady feast now that the magazine had arrived. Many expec­ted the magazine would prove to be “a donkey diminishing into an ant before disappearing”, as a popular Tamil phrase goes. But Thuglak, named after Cho’s fam­ous Tamil play Muh­a­m­med Bin Thuglak, a roaring political satire, has been as doughty as a donkey. There were a few more covers with India’s most verbally abused animal during the first Tamil political magazine’s 50-year journey as Thuglak became an inseparable part of Tamil ­Nadu’s Dravidian-dominated pol­itical narrative. Brahmins might form the bulk of its loyal readers, but no major politician could aff­ord to ignore its contents, especially when Cho was around.

“Thuglak used to be a prized poss­ession of student leaders during the 1970s and one issue would go around our hostel before the next one hit the stands,” admits DMK spokesperson K.S. Radhakrishnan. Launched when K. Karunanidhi was calling the shots and no local publication dared to question the government, the magazine became the opposition’s leading voice against the DMK’s hegemony. When Karuna­nidhi refuted that photos of Hindu gods had been garlanded with chappals during a rationalist outfit’s procession in Salem, Thuglak published the photos to disprove his claim. Karuna­nidhi ordered the seizure of all copies from the press, but a few bundles made their way out and the issue became a collector’s item. This boosted the circulation and Cho acknowledged it with a photo of Karunanidhi sitting at a table with the name board “Thuglak ­circulation manager”.

The first cover of Cho Ramaswamy’s Thuglak had two donkeys being promised a steady feast.

Thuglak’s USP was Cho’s satirical hum­our popping out of almost every section—cartoons, political serials involving Jaggu, a Chennai rowdy doling out political wisdom and the hugely popular Q&A. When the Indira Gandhi government decided to bring out a stamp to commemorate Sanjay Gandhi, Cho questioned the logic as Sanjay had no acc­omplishments other than being the PM’s son.  Thuglak published its own set of stamps of Subhash Saxena, the co-pilot who died with Sanjay in the 1980 air crash. Many readers even posted letters to Thuglak with the Saxena stamps and they got duly delivered.

Cho’s magazine was the only publication in Tamil Nadu to oppose the Emergency. It got around the strict censorship with various tricks—printing a film review of 1950s Tamil film Sarvadhigaari (Dictator) with Cho comparing the villain to a north Indian politician (Indira, of course); publishing a critique of Tamil theatre highlighting anti-establishment dialogues from the pre-independence era; ridiculing the 20-point programme with a satirical ad for a pappad brand selling its 20 properties.

“The magazine carried credibility even though it was avowedly anti-DMK and used to switch sides ahead of elections, with Cho explaining why he chose the lesser evil,” says journalist R. Bhagwan Singh. “He also shared a personal rapport with most of those who were ridiculed on the cover.” Though unabashedly pro-BJP, Cho printed a black cover after the Babri Masjid’s demolition and carried an editorial tit­led ‘Atrocity at Ayodhya’.

Asked if Thuglak shed its semblance of neutrality after Cho’s demise in December 2016, editor S. Gurumurthy says, “Neu­trality is like falling between two stools. What is more important is inde­pendence and Thuglak continues to live up to the standards set by Cho.”