Home  »  Magazine  »  National  » Media/International »  India As Seen From Abroad: Why Government Is Angry With Foreign Media

India As Seen From Abroad: Why Government Is Angry With Foreign Media 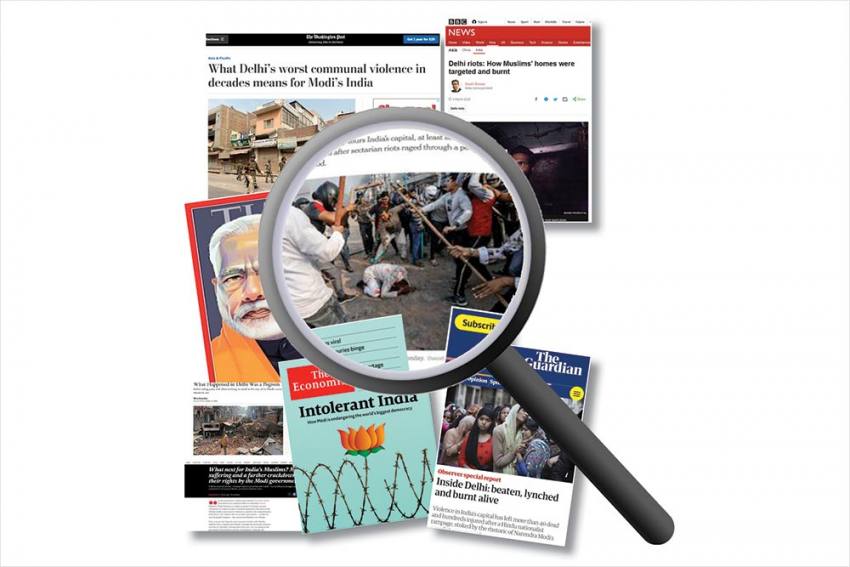 Bhavna Vij-Aurora March 12, 2020 00:00 IST India As Seen From Abroad: Why Government Is Angry With Foreign Media 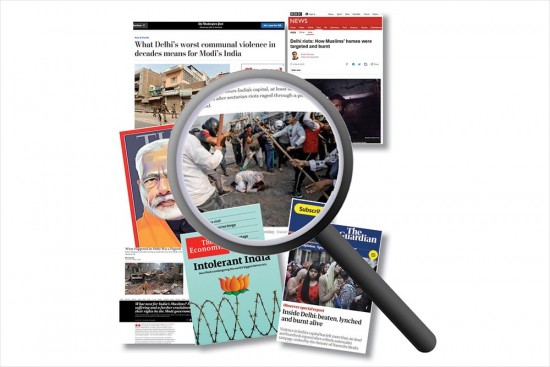 When US presidential hopeful Bernie Sanders talked about “widespread anti-Muslim mob violence” in Delhi, it had much to do with the international media’s reportage. From 2014, when Narendra Modi took over as PM, to coverage of the recent Delhi riots, the foreign press has gone from cautious optimism to outright portrayal of his regime as one that is turning India into a Hindu nationalist state. The Economist played up “Intolerant India: How Modi is endangering the world’s largest democracy” on a recent cover before the Delhi riots, which most foreign media called a “pogrom”. In its February 26 editorial, The Guardian called it a “Hindu nationalist rampage”, adding that “Modi stoked this fire”. No wonder all this has not gone down well with the government. Author Aatish Taseer had already been stripped of his overseas citizenship of India—less than six months after his Time magazine cover story in the run-up to the 2019 Lok Sabha polls called Modi “India’s Divider in Chief”. The Centre has decided to respond aggressively, but the information and broadcasting ministry is believed to be exercising caution since the fiasco of serving and then withdrawing notices to two Malayalam TV channels for their coverage of the riots.

“We are sending rejoinders backed by solid facts. It is factually incorrect to call it a pogrom as there were casualties and losses on both sides,” says an I&B ministry official. The ministry has already sent rebuttals to leading foreign media organisations, including The Guardian, Wash­ington Post, Time, Al Jazeera, The Eco­nomist, Huffington Post, New York Times and the BBC. Prasar Bharati CEO Shashi Shekhar Vempati was among the first to register his protest. Tur­n­ing down a BBC invite to an event, he wrote to its head Tony Hall that the broadcas­ter’s coverage was “one-sided” and “damningly silent” on attacks on policemen and the “brutal targeted murder of an Intelligence Bureau official”.

“The objective of my letter was to sensitise the leadership of the BBC to the lack of balance in its reportage,” says Vempati. “Fake news and biased reporting by foreign media are vitiating the atm­osphere in India and perpetuating false perceptions abroad. India is the world’s largest democracy and one of the largest open markets for consuming English media. Most of these media outlets have reached a saturation point in terms of growth in their primary markets in the West. The only other big market is China, which has very high barriers and is not English-speaking. That’s why these outlets are hyper-focused on rep­orting every minor incident in India. Even a small controversy can cause a substantial spike in digital traffic to these outlets that are increasingly challenged to sustain their growth through digital.”

The ruling party is working in tandem with the government to counter the image of being anti-Muslim. “The bias in the international media’s reporting on the riots needs to be called out,” says BJP vice president and spokesperson Baijayant Panda, who is part of his ­party’s effort to reach out to diplomats and foreign correspondents reporting from India. Panda divides foreign correspondents into three categories: “those who don’t want to engage and continue to write what they want to; those who will listen to you, but have already made up their mind; and a small number of those who are willing to listen and report both the sides.” “A journalist has to be like a judge—listen to both the sides and then take a view,” adds Panda.

The government is also concerned about Indian columnists writing for ­foreign publications. “The problem gets exacerbated due to them as they know the facts, but are not interested in ­reporting them. The narrative their ­biased reporting creates has to be fought,” says the BJP spokesperson.