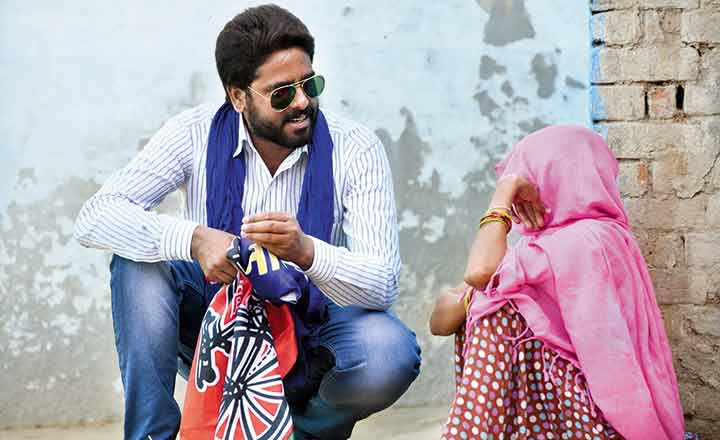 The roads are pink from the gulaal that wasn’t played long ago. A ­motorized, rickety cart attached to a scooter with fading colours is parked alongside a bubbling drain. Two eight-year-olds are locked in a fierce battle, while a third is rending the air with a red plastic whistle. A dog, with an onion peel perched on its quarters, looks on.

In Aligarh’s Nagla Kalar area, Bahujan Samaj Party (BSP) worker Santosh Rao, 28, is campaigning for party candidate Ajit Baliyan. “Hum haathi, cycle, nal waale hain (Elephant, cycle and hand pump, these are our symbols),” he says, carrying the flags of BSP, Samajwadi Party (SP) and Rashtriya Lok Dal (RLD)—the three constituents of a gathbandhan in UP ahead of the April-May parliamentary elections. “And don’t forget to take the women and ­elderly with you.”

Rao comes from a family of BSP members. An MA in economics from a private college in Aligarh, he is a part-time property dealer, but focuses more on party work. “After this election, I’ll turn my attention towards the business,” says Rao in black shades and a blue gamchha around his neck.

A fierce supporter of Mayawati, he says the BSP chief has persistently brought Dalit issues to the fore. “Her politics has brought relief to us. It has even forced other parties to take us ­seriously,” Rao asserts and accuses the Congress and BJP of harassing Dalits. The Congress did it gradually over the years, he says, whereas, the BJP wants to knock the Dalits down in a single stroke. “If the BJP gets another five years, they’ll finish the Constitution. They’ve given reservation to the ­savarnas unconstitutionally,” he argues. “Bit by bit, they’ve diluted every provision for the Dalits. It’s scary to think what will happen in the future. We won’t get any jobs. As it is, we own no wealth or property.” His other gripes: the BJP government has finished small enterprises, failed to provide jobs, told lies, and let loose stray cattle to ruin crops.

A day earlier, a team of 10 visited Aligarh’s rural zone to canvass for their candidate. “We were a mix of people from different communities…Jatavs, Jats, Muslims, Yadavs,” he says. In a primarily Muslim area the team visited, the voters were advised to not let a split happen. “We didn’t go to the Brahmin-Bania localities. They are blind supporters of the BJP.”

Rao doesn’t associate himself with Hinduism. “We aren’t allowed in ­temples. We aren’t considered Hindus. Baba Saheb (Ambedkar) has given us a faith, Buddhism. I intend to convert to Buddhism,” he says. He is awaiting a law that protects Dalit reservation ­benefits even when one adopts Buddhism. Behenji will bring that law, he hopes.