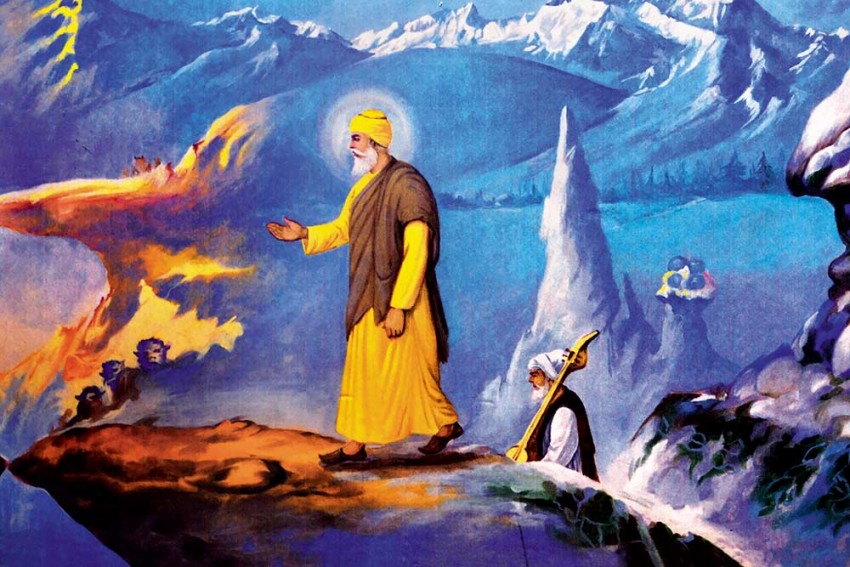 In Pursuit Of Panth
An artist’s rendition of Guru Nanak in the Himalayas
J.S. Grewal November 07, 2019 00:00 IST Road To Khalsa 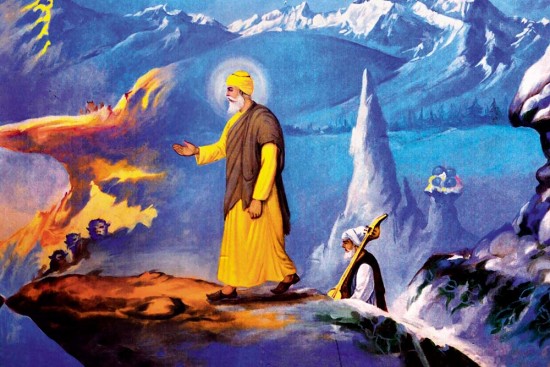 In the late 18th century, the East India Company began to take interest in the affairs of the Sikhs, who had emerged as a political power. Advised by Warren Hastings, James Browne collected information on the Sikhs and published his History of the Origin and Progress of Sicks. He made a general statement that the Sikhs were at first quiet, inoffensive and unarmed, but persecution by Aurangzeb made them take up arms against the Mughal empire under the leadership of Guru Gobind Singh, whose militancy presented a contrast to Guru Nanak’s pacifism. A dichotomy between the first and the 10th Gurus became a stereotype in later British historical writing.

Meanwhile, the idea of the unity of Guruship was developing among Sikhs. They saw no difference ­between Guru Nanak and his successors. In the early 17th century, Bhai Gurdas projected Guru Nanak and his five successors as one. In the Sri Gur Sobha, written soon after the death of Guru Gobind Singh, all the 10 Gurus are projected as one. In the early 18th ­century, in the inscriptions on the seal of Banda Singh and the coin stuck in his time, Guru Nanak is regarded as the source of inspiration and power. Ratan Singh Bhangu, writing in the early decades of the 19th ­century, records that when Captain Murray, the British political agent at Ludhiana, asked him who gave sovereignty to the Khalsa, Bhangu’s reply was “Guru Nanak”. Teja Singh and Ganda Singh suggested in 1950 that Guru Nanak would have done something similar to what Guru Gobind Singh did if he had the same resources. It has been argued that the Sikh panth developed steadily from the time of Guru Nanak to the institution of the Khalsa as a culmination of the movement started by him.

A comparison between Guru Nanak and Guru Gobind Singh in terms of religious ideology, the idea of equality, social commitment, ethics and the use of physical force would clarify the position. In Guru Nanak’s compositions, we find an uncompromising monotheism as the core of his convictions. He ­believed in one God and no other—all powerful and present everywhere.  He alone is active and eternal. What pleases Him is good. His greatness cannot be comprehended. He is subject to no limitation. His grace alone can enable a human being to recognise the sole existence of the True One. He takes care of His creation. The created beings have no power of their own. They act is accordance with divine ordinance (hukam). Liberation is possible only through God’s grace (nadar). Three attributes of God stand out: unity, power and grace.

“If you wish to play the game of love, place your head on your palm before you enter my lane,” says Guru Nanak.

In Guru Gobind Singh’s compositions, God in His absolute state is formless. He is transcendent and ­immanent at one and the same time. God is eternal. He is the destroyer of the wicked and fosterer of goodness. He is the vanquisher of enemies. He is the des­troyer of the suffering of death and rebirth. In the Akal Ustat, Guru Gobind Singh talks of unity in diversity. Like Guru Nanak, Guru Gobind Singh makes it clear that he worships only the One God: “Ever since I have held your feet, I have not cast my eyes on anyone else. Ram and Rahim, the Puranas and the Quran say countless things, but I recognise none. Smritis, Shastras and Vedas talk of many secrets, but I know none of them. With your grace, O Wielder of the Sword, not I but you have spoken everything.”

In the compositions of Guru Nanak, the idea of equality flows from the unity of God. All human ­beings are created by God and, therefore, all are equal in His eyes. The same light is in everyone and everyone belongs to God. Every human being is under God’s protection. It is important to note that liberation is open to all. Guru Nanak’s criticism of caste ­distinctions is based on the idea of equality. There is none high or low, he says, except in accordance with the honour conferred by God. Caste does not count in God’s court; only they who are good receive honour at His court. Not low caste, but low conduct brings ­misery. The ‘false’ possess neither caste nor honour.

Guru Nanak also extends the idea of equality to women. He defends women against those who insist on relegating her to an inferior position. Women have the same light as men, and liberation is open to both. Woman is at par with man, just as the shudar (shudra) is at par with the brahman.

Guru Gobind Singh instituted the Khalsa on the basis of equality. It was open to all irrespective of caste, creed and gender. Those who joined the Khalsa were equal in the Guru’s eyes. In fact, Guru Gobind Singh himself was initiated by the five Singhs (panj-pyaras) whom he had initiated. In one of his ­compositions, Guru Gobind Singh underlines the idea of equality: “All human beings should be recognised as one. Regard them all as one, having one and the same light.” The idea of equality was built into the doctrine of Guru Panth (the community as the Guru). No member of the Guru Panth was higher or lower in ­status than the others. 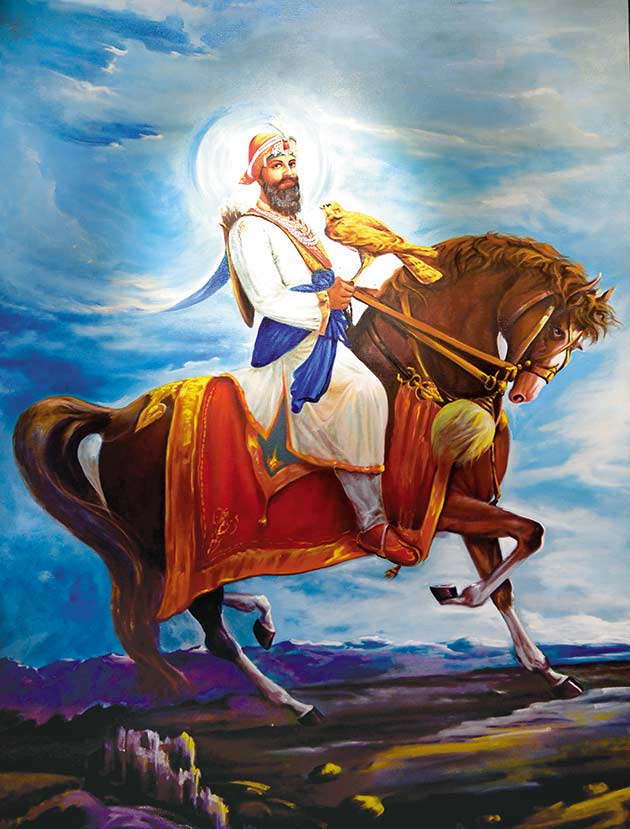 Social commitment was an ­essential feature of Guru Nanak’s ideology. He ridicules the renunciate for abandoning his own home and then begging from door to door. Guru Nanak favoured hard work to be able to give something to others out of one’s honest earnings. He ­preferred the householder over the celibate. The person who attains ­liberation does not sit in meditation to enjoy his bliss. He works more for others than for himself. Indeed, par-upkar (welfare of others) is a necessary condition for liberation and the primary expectation from a person who attains liberation. Every Sikh should be par-upkari. Guru Nanak’s view of social commitment covered the whole social order from a daily wager to a ruler. Everyone was expected to pursue an honest occupation or profession.

Martyrdom was built ­into the Khalsa, which became a political ­community aspiring to establish its own rule.

Guru Gobind Singh reinforced social commitment and extended its scope. When the call for heads was given for instituting the Khalsa, five Sikhs volunteered to lay down their lives. Thus, martyrdom was built into the institution of the Khalsa, which became a political community aspiring to establish its own rule. The phrase “raj karega khalsa” (the Khalsa shall rule) occurs at the end of a rahitnama (manual for the Khalsa way of life) composed in the time of Guru Gobind Singh. The duty of the Khalsa was to bear arms and to fight for righteousness.

Guru Nanak talks of “sachchi rahit” (true way of life). His insistence on ethical living is well known. What is not so well known is that Guru Gobind Singh told a group of writers at his court to base their rahitnama on the Guru Granth Sahib. The rahitnama associated with Chaupa Singh is full of references to the Granth Sahib in support of the injunctions of rahit in his work.

Contrary to the general perception that Guru Nanak was opposed to the very use of physical force, he actually had no objection to a fight between two powerful parties. He strongly objected to unequal fights, as one between a lion and a cow. He had great appreciation for the warrior who fought for a right cause. To fight unto death in a righteous cause was an ideal to be cherished. “If you wish to play the game of love, place your head on your palm before you enter my lane,” says Guru Nanak. Those who ­entered his lane were potential martyrs.

Guru Gobind Singh was not the first Guru to take up arms. The fifth successor of Guru Nanak, Guru Hargobind (1606-44), who founded the Akal Takht, used to wear two swords: one of miri (temporal power) and other of piri (spiritual power). This was the tradition that Guru Gobind Singh inherited and carried forward.

Guru Nanak’s compositions (Bani) were used in his lifetime for congregational worship in the dharamsal (Gurdwara). Later, the Bani of his successors also came to be used for this purpose. Guru Arjan (1581-1606), the fourth successor of Guru Nanak, prepared a Granth in 1604. It contained the Bani of the first five Gurus, together with other compositions. The Bani of Guru Teg Bahadur was added to the Granth in the time of Guru Gobind Singh. In 1708, Guru Gobind Singh declared that the Granth Sahib would henceforth be the Guru. The Guru Granth Sahib was the only Sikh scripture, and the source of Sikh beliefs. To talk of dichotomy between Guru Nanak and Guru Gobind Singh is to ignore the ideological and institutional foundations laid down by Guru Nanak, and to oversimplify the process of Sikh history.