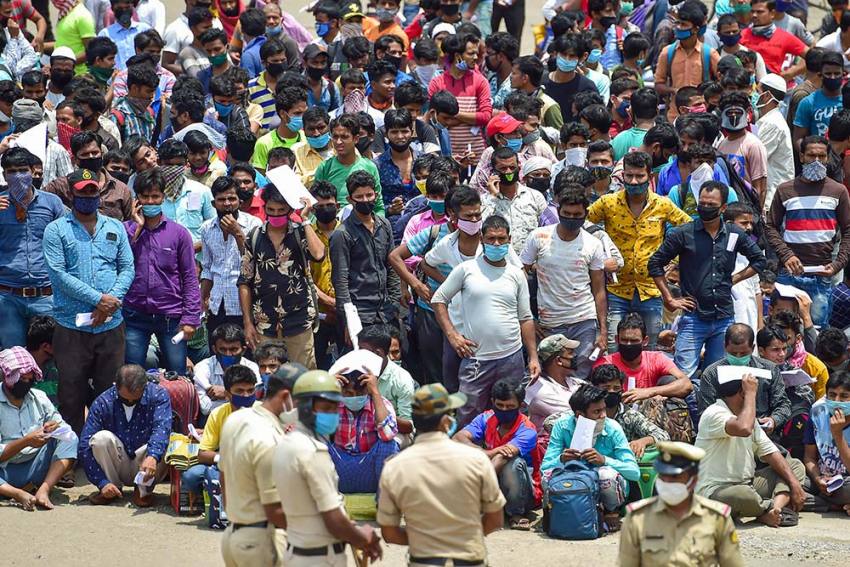 Labourers gather in Bangalore hoping to get on a homebound special train
Photograph by PTI
Ajay Sukumaran May 15, 2020 00:00 IST Riding The Rails 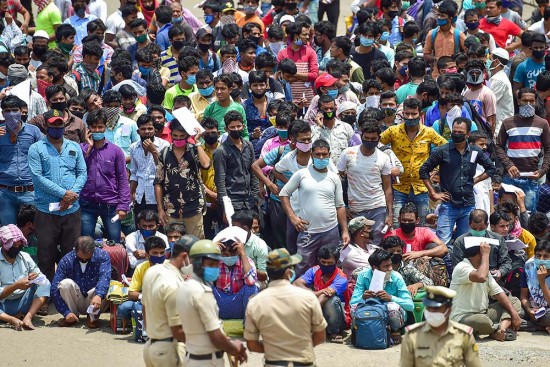 Migrant workers in most host states have faced the brunt of the nationwide lockdown—underfed, penniless, frantic with worry and desperate to reach the haven of their faraway villages. But Karnataka’s flip-flop on travel made matters worse for them last week. Having first requested for trains to ferry workers to their home states, the government did a U-turn by stopping them. Then, rattled by the Opposition accusing it of treating workers as ‘bonded labour’, the B.S. Yediyurappa-led administration resumed the ‘Shramik Special’ trains.

The Karnataka High Court has directed the state government to place on record its policy of enabling migrant workers to reach their home states. That apart, labour unions and activists are still apprehensive about the way ahead, especially with the route some states­­—like Uttar Pradesh—have taken by amending labour laws.

“There’s requirement for a rethink on how we go forward,” says Maitreyi Krishnan of the All India Central Council of Trade Unions (AICCTU). “The Interstate Migrant Workmen Act,” she says, “is the least implemented Act you can find. Hardly anyone is registered, it’s hardly enforced.” The Act protects the rights of migrant workers to stop them from being exploited by contractors. The lack of an accurate estimate of migrant workers, many say, is the first stumbling block. “There was never a proper estimate. But the thing is in the last two months they could have done a survey and planned, which they didn’t,” says Vinay Sreenivasa of the Alternative Law Forum.

It was unrealistic to assume starving workers abandoned by employers would register online, says Rajendra Narayanan of SWAN.

The Karnataka labour department, indeed, had a helpline and had drawn up a database of workers to supply ration kits during the lockdown. It counted upto 2.1 lakh people across 588 camps in Bangalore. These included three categories—people working on large projects and staying in camps, homeless workers housed in government hostels and workers who were scattered across the city. The plan was to clear the camps in a systematic way and police teams had visited each camp to explain the method, but things went haywire when registrations started, informs an official.

“Suddenly, we had 10,000 people on the roads,” says the official, explaining the decision to stop the trains. Officials reckon that when the railways’ online reservation system opens up, it’ll be possible for them to better communicate timings and reservations to workers through SMS.

Volunteers who reached out to those in distress say that many calls they received were from people going without food. “At a time when they have not been paid for about 40 days, when most of them have been abandoned by employers and literally hunting for food on a regular basis, I cannot begin to imagine how much their dignity would have been crushed,” says Rajendran Narayanan of Stranded Workers Action Network (SWAN). Fifty per cent of those who called SWAN over the last month had less than one day of ration left and at least two-thirds had less than Rs 100 left with them, he says. If workers hadn’t been paid, wasn’t it unrealistic to assume that they would be able to register on the government portal online, asks Narayanan. By providing kiosks and helpdesks to register to travel back home, the government can smoothen out the process, he thinks.

Maitreyi Krishnan of AICCTU says that complaints against employers over unpaid wages should be acted upon. The Karnataka labour department has received around 700 such complaints, which will be placed bef­ore a special task force.

Vinay Sreenivasa says that the government needs to come up with a proper estimate of workers and thereby, the frequency of trains needed to ferry them. So far, a little over 2 lakh migrant workers from about 23 states have registered on the government’s Seva Sindhu website. But labour unions such as AICCTU estimate that the numbers will increase once the state government undertakes an off-line identification of those wanting to return to their home states.