Resurgent CPI-M Eyeing Better Results In 2021 Assembly Polls, But Why Is TMC Happy?

In a state grappling with twin punches from COVID-19 and cyclone Amphan, the red hammer-and-sickle flag flies with confidence in every district of West Bengal. 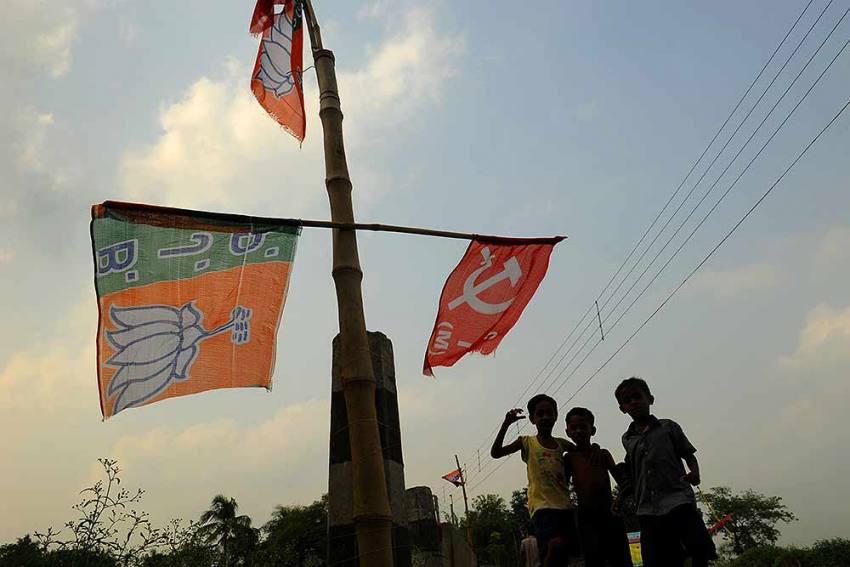 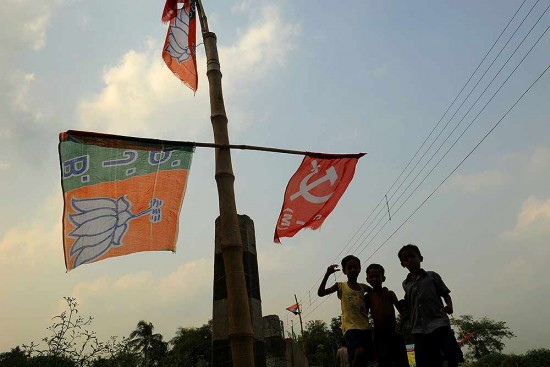 A blizzard of coronavirus is blowing over West Bengal, with    a patchwork of lockdowns speckling the state. Even so, sseveral citizens, like the state’s political grandees, have their sights trained on next year’s assembly polls. Kader Mollah, a 40-year-old carpenter, waits for the doctor’s summons at the end of a corridor in the Ronald Ross building of Calcutta’s SSKM hospital. A resident of the Sunderbans, Mollah shifted his allegiance to the Trinamool Congress (TMC) a few years ago from the CPI(M)—a common migration. The fate of the 2021 state polls, he says, hinges on one question: “Whether 20 per cent of the Left’s vote that shifted to the BJP in 2019 returns to the Left, or at least half of it.”

While it may not be the only factor, it surely is a key one; a reason for the TMC to ensure that the Communist Party of India (Marxist) opens its off­ices everywhere—premises that were destroyed or taken over after the Trinamool came to power in 2011—and organises rallies. “In our area, the CPI(M) has opened offices and increased its ground presence,” says Mollah. The Left’s comeback, calculates the TMC, will rebound to its favour in its fight with a resurgent, aggressive BJP. By this maths, if the anti-TMC vote gets divided between the Left and the BJP—unlike in the 2019 Lok Sabha polls, when the BJP bagged 18 of 42 seats—victory is ensured. The BJP’s lead in 121 of 294 assembly segments in 2019 gave CM Mamata Banerjee’s party a fright too.

The Trinamool has taken to the drawing board in earnest. “If at least 2-4 per cent of the CPI(M)’s vote ret­urns to it, we are safe,” says a senior party leader. There’s a certain buoyancy on the ground too—the CPI(M), often with the Congress, is holding big rallies in past bastions, like in Nandigram in East Medinipur district, where a ham-fisted approach to a land movement was a key reason to their downfall in 2011. Late last week, Sujan Chakraborty, leader of the Left legislature party in the assembly, and Abdul Mannan of the Congress, held a joint public meeting in Khejuri block, adjacent to Nandigram. Between 2006 and 2011, violence in Khejuri weakened the Left and helped the Trinamool. In 2020, with voters tired of the constant conflict—verbal and physical—between the BJP and the TMC, and seized with anti-incumbency, the CPI(M) is gaining ground in these areas.

The situation is nearly the same in Cooch Behar in North Bengal. Here, when local TMC leaders allegedly sent boys to harass Subhralok Das, the state secretariat member of the Students’ Federation of India (SFI), in Dinhata recently, he decided to organise a tatkhonik (instant) rally. “We announced it on Facebook about 12 hours before the meet; around 500 people attended it,” says Das. Indeed, in a state grappling with twin punches from COVID-19 and cyclone Amphan, the red hammer-and-sickle flag flies with confidence in every district. The CPI(M) state-level leaders say it emerged naturally, out of hardship.

“Till a few months ago, we hardly had young women and men in the forefront. But during relief work after Amphan we witnessed the participation of many who are in their twenties…it was hugely inspiring,” says a state committee member. Das agrees. If the BJP and its students’ wing “have Hindutva, the SFI has issues”, he says.

Sitting in a red-painted corner room of the CPI(M) South 24 Parganas district office, Sujan Chakraborty connects global developments with local ones for the party’s turnaround. “People are disillusioned with capitalism; they are getting nothing out of monopoly-driven capitalism,” he arg­ues. The Narendra Modi government has failed to keep its promise of creating jobs, he adds, “and oil prices are going up” as global prices dip. Workers’ rights are fast disappearing, while Bengal is in complete anarchy. “A combination of these factors is creating space for the Left,” says Chakraborty. He disagrees with the theory that the Trinamool is encouraging the Left in order to split the anti-TMC vote. 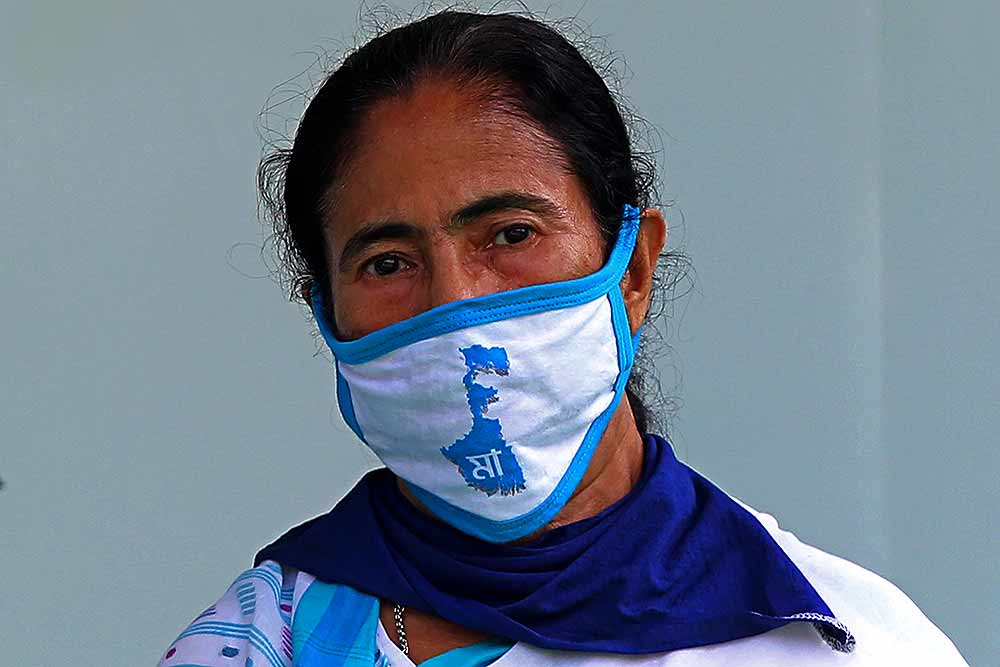 By one theory, TMC is encouraging CPI(M)’s rise as it would divide anti-Trinamool votes and hurt BJP.

“The TMC is losing heavily, their men are leaving, they are in no position to stop us,” he says. But the key question—raised by Mollah in Calcutta—on whether the 20 per cent vote share the Left lost could return, alerts Chakraborty. “It is a million-dollar question,” he says, almost in a whisper. He regains his flourish after taking a deep pause: “We expect a substantial number of votes to get back. The signs are visible. But two factors are crucial.” One, says Chakraborty, is the approach of both the TMC and the BJP to “promote a politics of binaries”. “The political pol­arisation along with a communal one, mainly targeting Muslims and Marxists, would help both the TMC and the BJP,” he admits.

Despite parliamentary and assembly polls differing in the very issues at stake, the TMC got 34 seats with a 39 per cent vote share in 2014, and merely 22 seats but with a higher, 44 per cent, vote share five years later. The more a politics of pol­arisation took hold, the more the TMC suffered in terms of seats and the Left in terms of both seats and vote shares. The TMC is to blame too, for as it ruthlessly marginalised the Left, it could scarcely stop the BJP’s steady march through Bengal, turning an essentially triangular contest to a dual duel.

Yunus Ali, a local Forward Bloc leader of Choto Jagulia village in North 24 Parganas, was one of the earliest Left grassroots workers to join the BJP. His house was attacked, he was beaten up, his brother—a CPI(M) worker—was jailed. He had little opt­ion but to join the BJP. In an effort to create an “Opposition-free” space by force, the TMC drove tens of thousands of people, such as Ali, into the waiting arms of the BJP.

The equation is different from the perspective of an RSS functionary. Dhanpat Ram Agarwal, national co-convenor of the RSS’s Swadeshi Jagran Manch and in charge of the BJP’s economic cell, says it would be difficult for the TMC to retain power. “The vote moving back from the BJP to the CPI(M) is not a possibility. Realising that neither the TMC nor the CPI(M) are options, people are moving to the BJP as, on two key factors, industry and infiltration from Bangladesh, both have failed,” Agarwal says. He bel­ieves that while the Congress and the CPI(M) will hold on to some dedicated votes, the TMC’s vote share will hugely reduce, benefiting the BJP. The Trinamool admits to a certain degree of anti-incumbency, but rests hope on the charisma and leadership of Mamata Banerjee—something, the party leaders says, the BJP cannot match.

Still waiting in the hospital corridor, Mollah says voters take time in Bengal to change a government once they elect one, indicating that the TMC will stay in power. “The CPI(M)’s rise will make the contest triangular again, which is important for the Trinamool to hang on,” stresses the carpenter from Sunderbans.