The Congress has termed abolition of reservation as an endorsement from the RSS. Even BJP allies are unhappy 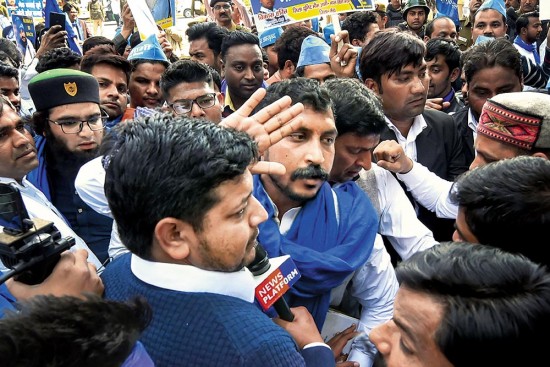 Nearly nine decades after the 1932 Poona pact between B.R. Ambedkar and Mahatma Gandhi that initiated reservation for backward classes, the debate on social justice is only getting shriller. In the latest, a February 7 Supreme Court order that states that reservation is not a fundamental right has sparked an intense political debate and disquiet amongst backward communities.

The top court has ruled that there is no fundamental right to reservation in appointments and promotions in public services under Articles 16(4) and 16(4A) of the Constitution. It added that it was the discretion of the governments, either at the state or Centre, to grant reservation in promotions. Constitutional exp­ert Faizan Mustafa says it is a letdown for depressed classes. “The SC judgment is disappointing as the court has overlooked judgment of the larger benches on the relationship of Article 16(1) with that of Article 16(4). Article 16 (1) talks of right to equal opportunities in jobs and prohibits discrimination only on the basis of religion,  race, caste, sex, place of birth, residence and descent. Article 16(4) says that nothing shall prevent the state from making reservation in favour of any backward class,” he says.

The case pertains to a decision by the Uttarakhand government in 2012, when the ruling Congress filled government posts without giving reservation to sche­duled caste (SC) and scheduled tribe (ST) communities. The latest ruling says that this provision is merely enabling; states may or may not make reservation.

“The court no more regards the provision in Clause 4 as an exception, treating this as an extension of Clause (1) and technically this is the correct interpretation as equality of Clause(1) is not enough to have a level playing field for the underprivileged. People historically oppressed and excluded needs a...