Republic Day Special | Opinion: Democracy Is About Difference And Its Celebration, Drowning Voice Can Be Counterproductive

As the Indian Republic draws to 70, the hopes and dreams lie in vibrant debate. The challenge will lie in addressing the yearning for identity in a way consistent with the practices of democracy, writes Mahesh Rangarajan 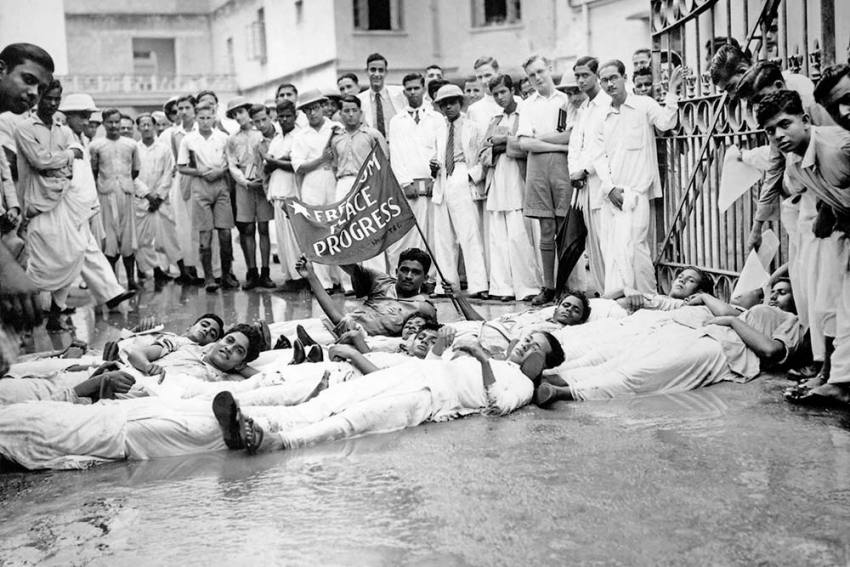 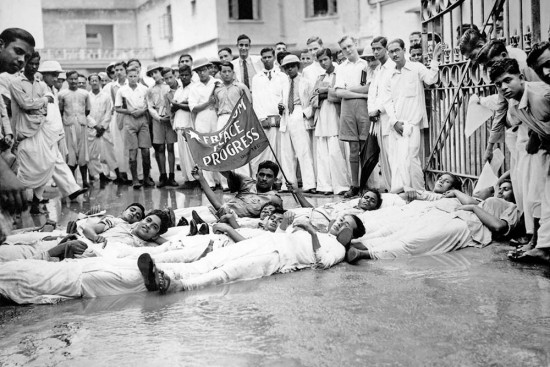 A year ago, it was clear that republican democracy was at a crossroads. The very term is about a place where choices are made about which direction to proceed in and at what pace. This isn’t the first time India has been at such a juncture, but there is a crucial ­difference. In May 2019, India’s voters didn’t just give the Modi-led NDA government a second term in office, they also increased the seats and voteshare of the ruling party. Together with allies, the BJP polled an impressive 45 per cent of the popular vote. This meant, at the very least, that there is one ruling party at the helm of affairs in New Delhi for a decade with a majority of its own—for the first time since the 1980s, when the Congress was in power under Indira Gandhi and then Rajiv.

There is another crucial difference: India then had very few opposition governments. Madras, Calcutta, Hyderabad, Bangalore, Guwahati, Aizawl and Srinagar were among the few state capitals where the CM was not from the Congress. The Congress under Indira, especially after 1972, commanded almost all the states. In March 1971, the Congress (R) secured a two-thirds majority in the Lok Sabha. It then took over most states in the mid-term assembly polls in 1972. This was to be critical as unrest grew in 1974-75, first in Gujarat, followed by Bihar and then much, if not all, of India. The pattern broke in 1977-80, but Congress dominance was restored after 1980.

Today, the picture is very different. The BJP gains from the deep crisis that continues to afflict the Congress. Since its bid to make a mark in the UP assembly elections of 2012, the party has struggled with the issue of leadership. This is compounded by two successive defeats in the ­general elections and a new feature in the oldest of India’s parties—some state leaderships seem more agile and grounded than the all-India high command. But the BJP is still not in control of 16 of the 28 states. This makes all the difference, given the extent to which it aims to redefine the grammar of politics. 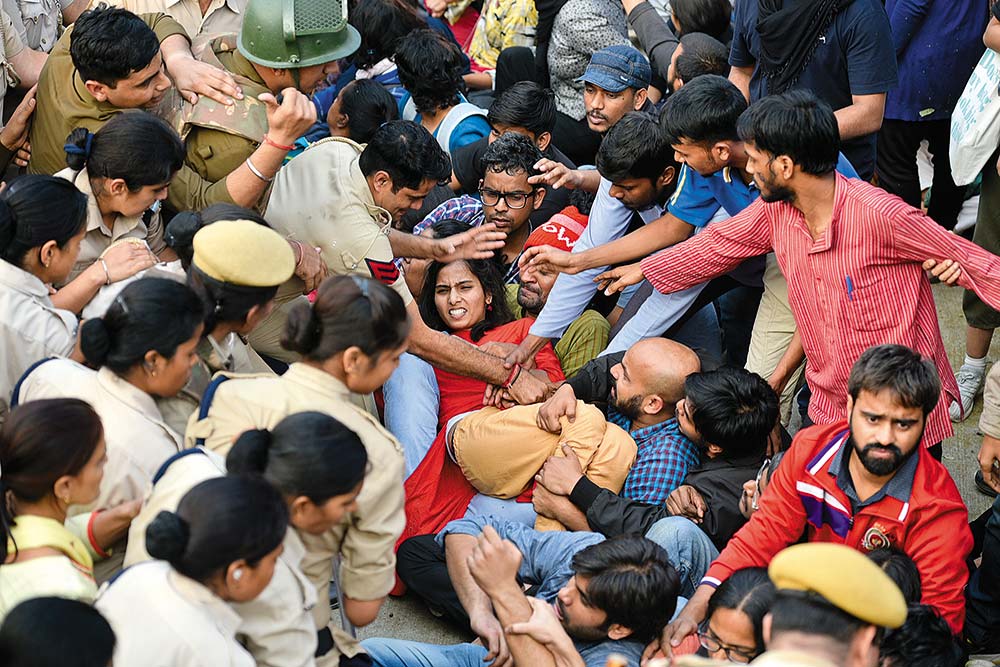 Students of JNU at a protest in November 2019.

Amidst the rapid changes unleashed by the Modi ­government, the annulment of Article 370 elicited wide comment. What was crucial is not just the relation of Jammu, Kashmir and Ladakh with the rest of India. But the abolition of statehood and the carving up into two Union territories was salutary. It has implications for the federal frame well beyond Jammu and Kashmir as the state was from 1947 to 2019. It raises questions about whether the Parliament, drawing on the governor’s views, can abolish any state. If it were so, India would be a Union of Union ­territories, not a Union of states. This may seem far-fetched, but the fact that it has happened establishes a precedent.

At a pan-Indian level, the ideas and ideals of republican democracy have more traction than a few imagined.

It is no coincidence that the two states with the most ­sustained protest—Punjab and Tamil Nadu—were both with a strong sub-national identity and a long history of struggle for a more even distribution of powers between the Centre and the states. This rift between the Centre and key states has been even more marked with the issue now at the ­centre stage of politics: citizenship. The amendment passed by the two Houses of Parliament and signed into the statute book by the President is a significant one. For the first time, there is a fast track to designated groups from three neighbouring Muslim-majority countries. All the listed groups are non-Muslim religious minorities.

India was more than idea or ideal. It became a ­nation-state above partisan calls to faith, sect, tribe or creed. At the same time, by stating that, “India that is Bharat shall be a Union of States”, it affirmed that diversity would strengthen, not weaken unity. This will explain how the anxieties of those in the Brahmaputra Valley of Assam, for decades a destination for settlers from the more crowded plains of Bengal, could find redress. The issue of citizenship had a different salience from Oxomiya nationalists, from Gopinath Bordoloi or Ambikagiri Raichoudhury. These found redress in the Assam Accord of 1985 with 1971 as a cutoff date. It is no coincidence that in viewing India through a Hindu/Muslim lens, the new amendment and the citizenship process that foreran it provoked such deep resentment across Assam.

To pull back to the larger picture, there is no doubt about the mandate of the ruling party. Nor can anyone question the conviction of its leaders and cadres who believe they know what is best for India. They see these moves whether on Article 370 or citizenship as “historical wrongs” being set right. In a strange way, it is Tsarist Russia (where there was no doubt the Great Russians ranked first) or China (ditto the Han Chinese) that evoke comparison. Or Burma, where the nascent nationalists aligned with the invading Japanese to force out Indians who often had to flee on foot. Or General Zia ul-Haq’s Pakistan, where Islamisation stirred a witches’ brew with explosive consequences for this region and beyond to this day.

The challenge will lie in addressing the yearning for identity in a way ­consistent with the practices of democracy.

But India is unlike any of these countries. It is neither an empire nor a one-party state. It has a distinctive history. The idea of an inclusive India was not crafted by the English-speaking elite in salons and coffee houses. It took shape in a largely non-violent freedom struggle, which saw the end of imperial rule as the first, not last, step in the forging of a nation-state. Here the new rulers err. Where they probably more than just err is in underestimating the ways in which diversity and democracy are intertwined in a continental polity with seven decades of an active democratic political life. The last matter for democracy is not about dissent, which exists even in authoritarian systems. Democracy is about difference and its celebration.

This is clearest where state boundaries and regional ­aspirations matter. For all the differences, those in Assam have played a central role in the denouement of the National Register of Citizens. Octogenarians, war veterans, elected representatives of the people and pillars of local communities were being denied citizenship. Two-thirds of those who did not manage to produce necessary documents were Hindus. Far from drawing lines on grounds of faith, the process created a new solidarity where yesterday’s proud citizen became today’s hapless subject.

At the larger level, this raises a question of Centre versus states. If states such as Maharashtra or West Bengal do not cooperate, what real options does the Centre have? There may be legal and constitutional remedies, but it is unclear if there can be a political breakthrough without a dialogue.

At a pan-Indian level, it is clear that the ideas and ideals of republican democracy have more traction among large sections of society than a few commentators or observers imagined. It is humbling to witness students and young people across towns and metropolises gather to read the Preamble to the Constitution. Across north, west and south India, Muslim women have not only held up the ­tiranga, but also pictures of B.R. Ambedkar.

It is still unclear what happens next, but there is little doubt on the epochal nature of the times we are living through. Never has what India does or does not mean been so keenly contested since the early years of independence. The challenge will lie in addressing the yearning for ­identity in a manner consistent with the practices of ­democracy. And to attempt this is a manner that is ­respectful of regional aspirations and loyalties.

None of this is possible with a weakening of the democratic framework. A year ago, the possibilities lay in the light that electoral battle might shed on choice or policy. But as the Republic draws to 70, the hopes and dreams must lie in ­vibrant debate. And those who try to drown these voices out may do well to think again. After all, a country lives in its people. What unfolds next hinges on how far the ­remaking of the polity and society encounters serious, ­sustained resistance. The day the latter meshes with the bread-and-butter issues, the government, no matter how large its majority, will have a challenge on its hands. Even short of that, it is already wrestling with a legacy of democracy that is entwined with an idea of India with deeper roots than they perhaps bargained for.