Reporter’s Diary: How I Was Attacked While Covering Farmers' Protest

Police brutality on protesters and journalists during the farmers’ agitation reveal a deep malaise—of a rampant lack of accountability in the system.

More from Mandeep Punia
View All

It was a chilly night on January 30. I was there to report on a mob att­a­ck on farmers at the Singhu border, which had taken place the day before. Suddenly, I found myself being dragged to the lock-up by police. They were beating me with batons all along the way. Shortly after my arrest, a video of “police atrocity on a journalist” went viral on social media.

It was not the first time during the movement that journalists had to endure lathi blows, tear-gas shells and manhandling. Many journalists had to face such treatm­e­nt from the men in khaki. There are many people who try to defend the aggression meted out by police on protestors during the movement, with loaded words like “law and ord­er”. It is true that one of the central features of democracy is upholding of the rule of law. However, it often exists as a gov­erning principle on official papers, whi­le the ground rea­lity is completely diffe­r­ent.

With the same camera that was broken by police on the night of January 30, I had shot a video in which several Delhi Police offic­e­rs were caught gesticulating to an anti-­farmer mob that had thronged the Singhu border to hurl stones at the protesting farmers. Thankfully, that video is still safe with me. I also have similar footage from Hisar district, in which officers of Haryana Police can be seen pelting stones at farmers themselves. To me, Haryana Police appea­r­ed more “sorted”, because, instead of invi­ting a mob to throw stones, they thought it wise to do the job themselves.

ALSO READ: Roses Among Thorns: The Many Solidarities Of Diverse Protests

On January 31, when I was sent to Tihar jail, I met many farmers there. They all showed me marks of lathi-blows on their bodies, and said, “Show us your injuries.” Jasminder Singh, 43, a farmer from Punjab’s Peron village, who was locked up with me in a small cell, looked at me with moist eyes, lifting his pyjamas to show injuries on his feet. “Look at how mercilessly pol­ice have assaulted us,” he said.

One by one, Jasminder showed me all the inj­ury marks on his body. The big blue marks told their own tales. They were proof he had been beaten black and blue with canes by the cops. 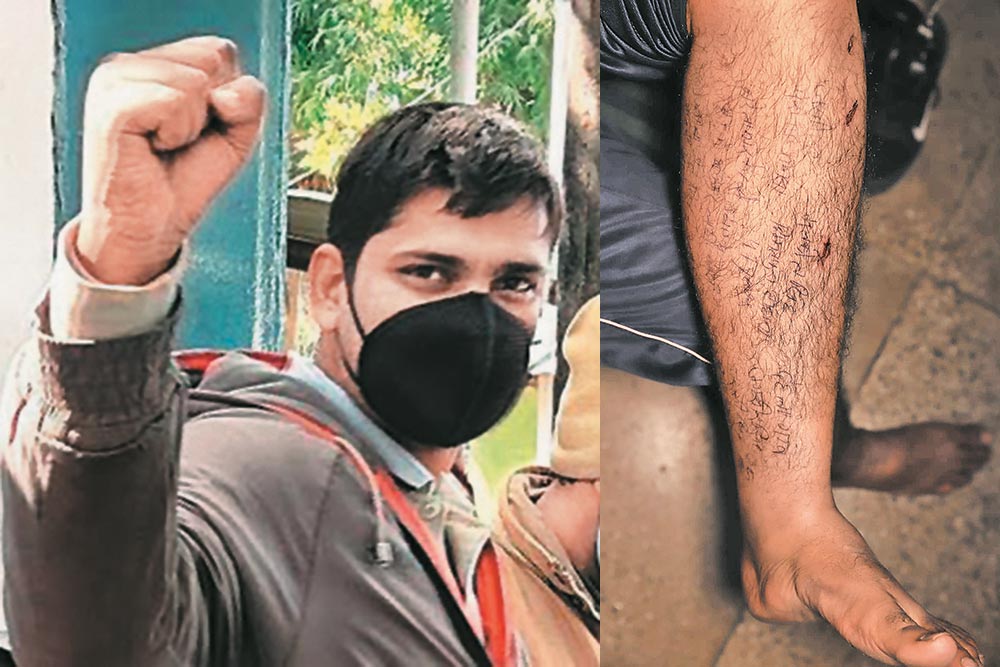 Jasminder was seething with fury while showing those injuries. When his anger subsided, he broke his long silence, and said, “On January 29, many farmers had gone to get goods from Narela market. On our way back, police attacked us with lathis. We were all unarmed. After raining lathi blows on us, police forced around 30 of us into a green bus and brought us to a police station. Aft­er our medical examination, we were all sent to Tihar jail.”

A researcher, Shailaja, who is working on a rep­ort on police behaviour with farmers in the cou­rse of the movement, told me that based on data she had gathered so far, Haryana Police had registered the highest number of cases against far­m­ers among all states. Maximum number of arr­­e­sts of farmers as well as police lathicharge on them has also taken place in Haryana. From the very beginning of this movement, not only were police putting people under surveillance in the name of law and order, but also keeping them und­er house arrest. They have illegally detained people and slapped false cases on them as well. Even in lock-up, farmers were treated shamefully.”

The pictures that went viral during the movement will be etched in our memories forever. The scariest was a video from Aug­ust 28, in which Karnal SDM Ayush Singha could be heard asking policemen to sma­sh the heads of farmers. That same day, many farmers sustained head injuries, and one of them died.

ALSO READ: Farm Law Repeal Has Given New Life To Idea Of Protest In India

Police resorted to lathicharge six times that day, which cost the life of Sushil Kajal, a far­m­­er from village Raipur Jatan in Karnal dist­rict. When he reached home injured on the night of August 28, his clothes were sta­i­ned with blood and soil. The next morning i.e. on Aug­ust 29, he was found dead on his cot. When police came to know of Sushil’s death, they cremated him without conducting a post-­mor­tem. By the time the leaders of the protest could reach, his last rites had been performed.

When I visited Sushil Kajal’s house on the morning of August 30, his son Sahil said, “When he returned, I went to give him food but he didn’t eat. There were marks of lathi blows on his neck and body. When I saw his condition, I asked him to go to hospital. But he refused, saying he along with other farmers had earlier gone to a hospital in Karnal, but police had blocked entry to the city, and were running after them to beat them up more, so he had returned home.”

Sushil was a marginal farmer with only one-and-a-half acres of land. He remained active in the movement for 10 months, bef­ore he was killed. He used to visit the Bast­ara toll protest site in Karnal every day. His wife Sudesh told me, “Police had already identified the farmers who were more act­ive in this movement. On that day, he had stumbled and fallen during a lathicharge. The police caught up and hit him while he was prone. Later, they prevented them from reaching the hospital. What could be worse than that? Had the police allowed my husband to seek medical help at the hospital, perhaps he would be alive today.”

However, Karnal police denied all claims that Sushil Kajal had died due to injuries recei­v­ed during the lathicharge. Karnal SP Gan­ga Ram Punia told reporters that Sus­hil did not go to any hospital. “He retur­ned home and died in his sleep. Some peo­ple are saying he died of a heart att­a­ck. Repo­rts of his death due to injuries sustained during the police lathicharge are false.”

No wonder that while the Prime Mini­ster has now announced a rollback of the farm laws, protesting farmers are not considering it as a complete victory. Farmer leader Suresh Koth said, “Hun­dreds of cases have been registered dur­ing the movement. The government should withdraw all these cases, so that police do not harass the farmers after the agitation. We are not going back until the government takes back all the cases.”

Apart from the photographs and live media coverage that have been etched in our memory, concrete records to analyse the treatment meted out to farmers by the police don’t exist. It preve­nts them from articulating their views on the pol­icing system with force. It may also be the reason for the police’s unrestrained highhandedness with the agitators.

(This appeared in the print edition as "J’accuse")

Dalits Under Siege: How Lower Castes Are Being Systematically Targeted In Tamil Nadu

One Year On: How Farmers Kept Their Spirits High, Fought Propaganda Online & Offline

Mandeep Punia is an independent journalist