While Kamal Haasan's MNM fought the 2019 polls, Rajinikanth may launch his party in 2020. Can they combine to derail the Dravidian parties? 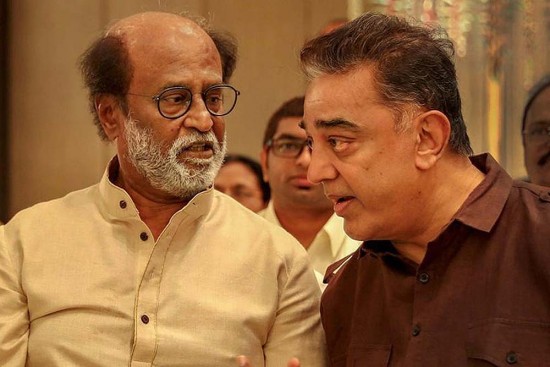 In their long movie careers Rajini­kanth and Kamal Haasan have acted together only in 13 films, the last many years ago. In many of them they have played adversaries; when they chose to chart their own paths as icons of Tamil cinema competing for the box off­ice pie, they emerged as friendly rivals. Again, when they decided, separately, to take the political plunge, they consulted each other. But, recently, the two hinted that they might, after all, join hands in their political battle with the two Dravidian majors in the state. “If there is a need Rajini and I shall join hands for the welfare of the people of the state,” Kamal said recently, something that was readily endorsed by Rajinikanth.

Both cited a political vacuum in the state after the demise of Jayalalitha and Karunanidhi as the reason for their pol­itical entry, which had riled the two successors—chief minister Edappadi K. Palaniswami and DMK leader M.K. Sta­lin. While DMK leaders and its allies claimed that Stalin had successfully filled the void and swept the Lok Sabha elections, EPS hit out, recalling how even a great actor like Sivaji Ganesan failed to make a mark in politics. “Not everyone can be an MGR or a Jayalalitha to be successful in both films and politics,” Palaniswami remarked.