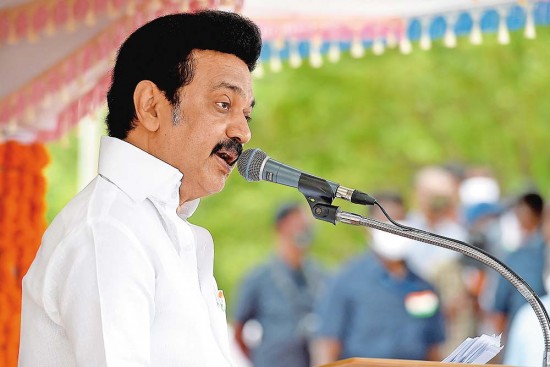 Among the many poll promises he had made, the one M.K. Stalin chose to implement on completing 100 days in power was the easiest to fulfill. He appointed 24 non-Brahmins as temple priests, meeting a long-pending popular demand.

While it met the optics of social equity, the new Tamil Nadu chief minister must have been acutely aware of the drain on the state’s finances. But Stalin has other worries, as the rest of his election promises aren’t as easy to implement. Faced with a humongous Rs 58,000 crore revenue deficit, his biggest challenge is to find the money to carry out his promises.

“We’ll not renege on our promises. We may take a while to identify genuine beneficiaries and to stabilise our finances, but all our promises will be implemented,” he assured the state assembly during the budget debate.

Stalin did implement three other poll pitches—free bus travel for women, and cutbacks in milk prices and state taxes on petrol—though the promised rollback in diesel prices was withheld. But others—Rs 1,000 allowance for housewives, writing off co-operative farm and jewel loans for farmers, and educational loans for students—have been put on hold. Not many are buying the excuse of delay for eliminating discrepancies in the beneficiaries’ list.

The government has been efficient in other fronts. It took charge when the Covid-19 second wave was peaking, and managed to stymie the virus spread by deftly appointing right officials in the right posts, expanding health facilities and implementing a “sensible” lockdown. “As soon as we took charge, we were forced into a firefight. We couldn’t even savour our victory,” says health minister M. Sub­r­a­maniam.

For DMK, the slippery ground is in non-economic promises like scrapping NEET

Stalin also made sure his campaign promise—of collecting and addressing complaints from each assembly constituency within 100 days—got top priority. He created a separate dep­art­­­ment—Chief Minister in your Constituency—and appointed an IAS officer to follow up on each of the 4.5 lakh petitions received. “We’ve resolved around 70 per cent of the complaints. The rest will be addressed by a month,” said an officer at the CMO.

The government is also focused on agriculture, in which the state has slipped over the past decade. With a separate budget, it is aimed at imp­roving food security and nutritional reach. “Our Integrated Village Growth Scheme will improve the rural economy and make villages self-sufficient,” says agriculture minister M.R. Panneerselvam.

“Ultimately, Stalin’s toughest task will be taking bitter economic decisions, like hiking power tariff, bus fares and property taxes, and imposing water cess. They may come after the local body elections, but can’t be ignored if he wants to repair the economy. Public won’t mind if he postpones some sops citing financial constraints,” says chartered accountant P. Srinivasan.

But for DMK, the slippery ground is in non-economic promises. The government claims it realised after taking charge that the only way it can fulfill its promise to scrap NEET was if the Supreme Court reversed its earlier ruling. To buy time, the government appointed a committee to seek pub­lic opinion on the exam, which predictably reported that underprivileged students were unhappy. But BJP pounced on it by releasing figures showing that numbers of underprivileged students clearing NEET have been rising every year. The AIADMK government’s quota for government school students has also made NEET less of a challenge for the underprivileged.

Another political quicksand is the issue of releasing seven convicts in the Rajiv Gandhi assassination case, in which DMK faces the same legal stalemate AIADMK encountered after its request to commute the life sentences of the convicts was forwarded to the President. “There’s a yawning gap between Stalin’s poll rhetoric and the post-poll reality. His government has been misleading students, who otherwise would have prepared sincerely for NEET. His own health minister is now advising students to prepare for the exam,” says BJP spokesperson Narayanan Thirupathi, gleefully.

(This appeared in the print edition as "Under Pressure")