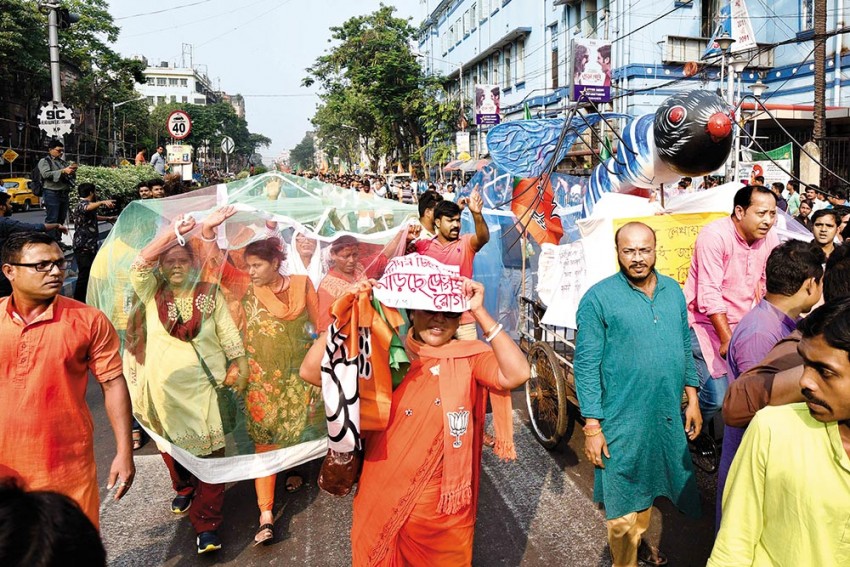 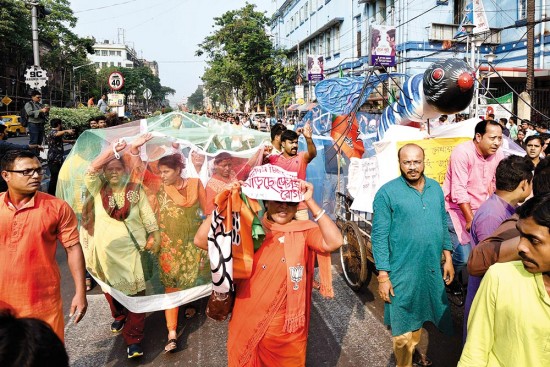 A number of deaths caused by the dengue virus in Calcutta and across West Bengal has raised concerns about the efficacy of the state health and municipal departments in preventing the spread of the disease. Almost every week, dengue claims a life or two, pushing the death toll to 23, according to the state health department sources. Unofficially, the count is 44.

So far, over 44,000 people have contra­cted the mosquito-borne infection; of them, around half have been affected bet­ween late October and early Nove­mber. People suffering from dengue con­­sist of a large share of the total patients in various hospitals, and according to a microbiologist, of 50 blood samples tested daily, 30 per cent were found to be dengue positive. A doctor in a government hos­pital also confirms a dire suspicion: lack of adequate number of doctors and health workers are impeding treatment.

The late exit of monsoon and further rain caused by a cyclone, say doctors, might have caused the sudden spike. After the recent death of a child at Cal­cutta’s Institute of Child Health, director Apurba Ghosh cautioned that after abate­ment of the fever, the next 72 hours is critical, and that the patient has to be kept under watch. As another doctor admits the occurrence of fresh cases, it is learnt that the World Health Organization has iss­ued a global advisory to adopt the Ste­rile Insect Technique to combat dengue.

Reports of the virulent strain stalking Calcutta and the districts, claiming lives at will, has created a huge public outcry. A group of women publicly demonstrated against the municipality in Lake Town area, where a child died of dengue recently. As a kneejerk reaction to the furore, the municipality started fogging that area, invoking ridicule.

Alarmingly, newer symptoms of dengue are emerging. “We must have a dedicated viral laboratory to study it,” says a top doctor.

Like it does every year, this year too the state government campaigned to create awareness, advising citizens not to let water accumulate in gardens, aba­ndoned land or residential compounds and take preventive measures. But, as writer Tilottama Majumdar pointed out, no steps were taken in preventing water being accumulated in buildings that were under-construction. More­over, indiscriminate use of plastic has choked many sewage drains, creating puddles on the ground. Subrata Chakra­borty, a ren­o­wned paediatrician, concurs. He says civic authorities must find ways to impose stiff penalties on owners of under-construction building projects. He stresses that a renewed campaign has to create more awareness about preventive measures before more lives are lost.

However, Chakraborty observes that severity of dengue this year is less compared to the horrific strain in 2015. According to him, severity of dengue returns in periodic order. “In 1995, 2005 and 2015, we have seen severe att­­acks of dengue. Now, the civic administration and the people have become relatively more aware about its danger and take some preventive mea­sures. Also, after the exit of monsoon, it is now on the wane,” he comments.

This year, alarmingly, Chakraborty saw in his patients new symptoms. For inst­ance, while the symptoms corres­ponded to the dengue virus, blood tests did not confirm it as dengue positive. Chak­ra­borty opines that at that stage itself one should administer intravenous hydration, as the mere absence of Coryza (inflammation of the mucous membrane in the nose) sho­uld be taken as enough ind­ication to initiate treatment, because dehydration occurs at a febrile phase, and any delay in treatment may cause leakage of body fluid (capillary leak), pushing the patient to a critical stage. He cautions that “dengue is a seasonal but regular phenomenon in tropical and sub-tropical areas, and its virus is continuously adapting itself through mutation. So, we must have a dedicated viral laboratory to study it continuously.”

The state’s Disease Profile Map for Dengue (2017) shows that it was widespread in all districts in north and south Bengal. West Bengal’s director of health service has been issuing a ‘Medical Officers Handbook for Clinical Manage­ment of Dengue and Malaria’. Based on the national guidelines for dengue treatment, the handbook (2018) admits that dengue fever may be symptomatic or asymptomatic (that is, with or without regular symptoms) and clinical manifestations may vary from undifferentiated fever to haemorrhage and shock. The WHO’s global advisory is also emp­hatic on the measures to fight dengue. Yet, year after year, a stream of people loses their lives in West Bengal to it. A remission is not in sight.

OPINION | 'Judicial Opacity On Women's Entry In Sabarimala Is Troubling'