Editor's Take | Journalism Wins If Journalists Are Held To Account

This issue of Outlook on the Indian media is testament to our objectivity. Subjecting ourselves to the same scrut­iny is only fair, since we constantly scrutinise everyone else, from politicians to police, writes Ruben Banerjee. 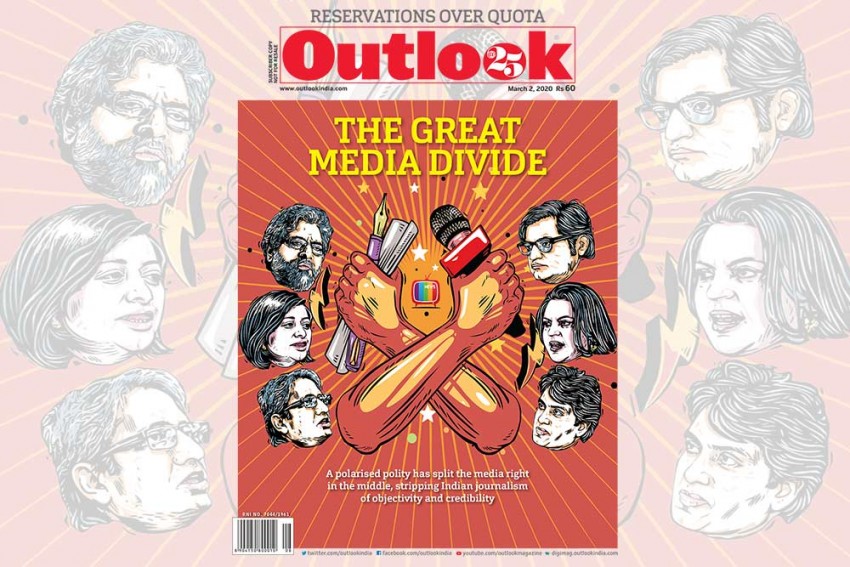 I wish I could take the plea of ‘aap chronology samjhiye’ (please understand the chronology) to explain away a grave oversight that crept into our issue dated February 17, 2020. The issue was devoted to Indian Muslims and an independent columnist was commissioned to write on icons from the community. Such columns are all about the columnists’ opinions—even if they are at variance with Outlook’s own—and the writer sent his piece on WhatsApp to an editor, who inexplicably forgot about it till the cover story package was to go to print. By the time he remembered and passed on the piece to the editorial desk, the deadline was close, and our gate-keeping mechanisms failed. Despite noticing that the piece made a totally unn­ecessary and disparaging remark against our former President, A.P.J. Abdul Kalam, the desk let it pass, presuming the editors had cleared it.

By the time the blooper was noticed, the deed was done and the magazine printed. We knew we were in for public censure and initiated frantic corrective measures. We held back the column from being uploaded online and then sent in an apology to the press for publication next week. But it was too little, too late. As to be expected, social media erupted in rage a day later and we got brutally trolled. Mostly abusive, many chose to offer us some cruel advice, including that Outlook should shut shop and I should start a roadside pakoda shop instead.

Given the gravity of our mistake, we und­oubtedly deserved the opprobrium. But nevertheless, it couldn’t have come at a more inopportune time. Dismayed and disturbed at the state of Indian media that seems increasingly polarised and guilty of pandering to political parties by burying all pretences of neutrality, we at Outlook had for some time been working to take an incisive look at how credible Indian media was/is. And by some strange irony, our own credibility took a hit around the same time.

Dented or not, there is no denying that credibility rem­ains at the core of our existence and we must do everything within our means to repair and reclaim it. News, we were told by our mentors when we started out, is sacrosanct. But that was then. Now, news has become more of a nuisance and grossly partisan. What you get to know these days greatly depends on which channel or newspaper you are watching/reading. A glaring example of the starkly different treatment of news could be the coverage of the recent JNU violence. While the students who were beaten up were viewed by several media outlets as victims, there were others who denounced them as no less than criminals.

True, we all have opinions and we need to take an editorial stand on things that we value. But that should not give us the liberty to twist news in the manner much of the mainstream media is presenting these days. In these polarised times, what is most alarming is the argument that the concept of media neutrality is outdated. According to its votaries, objectivity is passe and it is alright for the media to present news in a manner that buttresses its point of view.

That’s outrageous, just as the widely held perception that Outlook is part of Lutyen’s Media, is for me. For one, I am relatively new to New Delhi and yet to discover that elitist part of our capital well enough to belong to it. Not belonging to it, or for that matter any part, is a source of great comfort. We strive to report developing situations and trends with an open mind, taking an editorial stand without any prejudices.

This issue of Outlook on the Indian media is testament to our objectivity. Subjecting ourselves to the same scrut­iny is only fair, since we constantly scrutinise everyone else, from politicians to police. Journalism wins when journalists too are held to account.