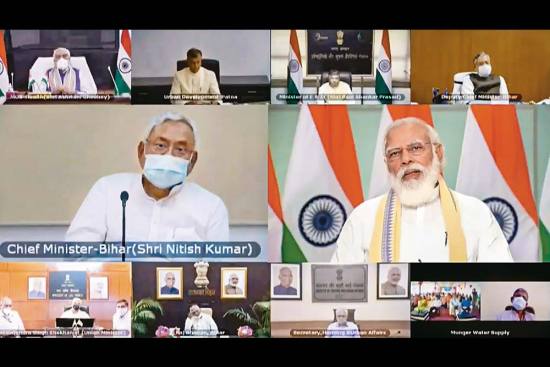 Eighty-six years after a devastating earthquake demolished a British-era railway bridge to cut off Mithilanchal in Bihar’s north with the Kosi belt in the east, train services have resumed to reunite the two culturally-rich regions of the state. Thanks to Kosi Mahasetu—a new bridge over Tilyuga, a tributary of Kosi—the distance between the two areas separated by the 1934 earthquake has been reduced by about 275 km. Built at the cost of Rs 516 crore, the bridge is nothing short of a dream-come-true for lakhs of people on both sides of the river who share similar culture and language. Unsurprisingly, the NDA is tom-tomming the “big achievement” going into the October-November assembly elections in Bihar.

With chief minister Nitish Kumar hoping for his fourth consecutive victory, the bridge replacing the one built in 1886 is being touted as an epitome of the “development-centric politics” pursued by the NDA government led by him. It was in 2003 that then Prime minister Atal Bihari Vajpayee had laid the foundation stone for the bridge when Nitish was the railway minister at the Centre. Seventeen years later, it has been inaugurated by Prime Minister Narendra Modi when Nitish happens to be the chief minister. “Many areas of Bihar rem­ained cut off for decades because of the rivers and people had to travel long distances. But with determination and an ally like Nitish Kumar, what is not possible? Kosi Mahasetu is an example of that,” Modi said while flagging off the first train on the new bridge via video conference on September 18.