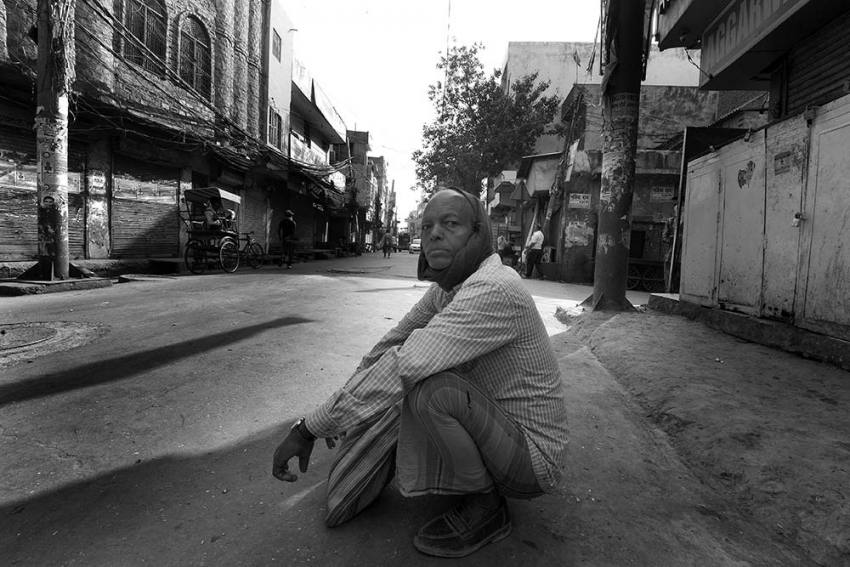 An out-of-work migrant worker ponders his future after the lockdown.
Photo by Jitender Gupta/Outlook
Preetha Nair April 03, 2020 00:00 IST Plight Of The Nowhere People And Why Bihar Faces Social, Economic Doom 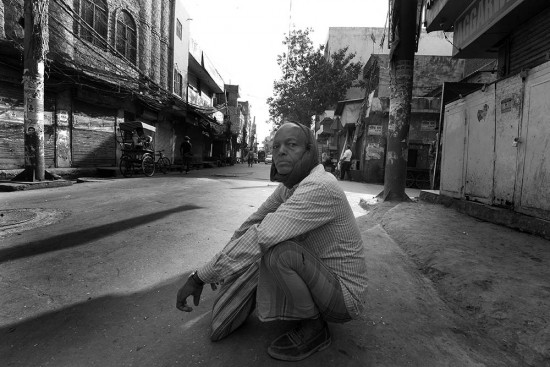 For over a week, Sadat Ansari has been confined to a dingy 10x10 feet room in Khirki extension in South Delhi, a rented accommodation he shares with seven more people. He stares at the sprawling shopping centres across the street, constantly reminded of the glaring social distance between him and the urban crowd. Ansari, a daily wage earner was rendered jobless on March 25 when Prime Minister Narendra Modi announced a nationwide lockdown to stop the spread of a silent killer—the new coronavirus.

Hunkered down at his tenement, the 36-year-old who came to Delhi from Bihar’s Madhubani district 20 years ago wanted to join the thousands of mig­rant workers who had hoped to rush back to their villages, despite the lockdown. What held him back? Ansari left his village because it has little to offer. No jobs, no money. Abject poverty. The stich hasn’t changed all these years. Besides, the Bihar government has no plan in place for them. “I don’t even own a small plot of land. What will I eat there? Though the Bihar government has announced free ration, we will get it only next month. Do they want us to die?” he asks. But his roommate, Mohammed Usman, thinks it’s “better to die on the roads than die of hunger in this city”.

As governments—at the Centre and states—grappled to tackle a humanitarian and potential health crisis due to the reverse migration of workers from urban centres to villages, experts warn that the exodus could lead to massive economic devastation in the rural sector. Dr K.P. Kannan of the Thiruvananthapuram-based Centre for Development Studies predicts that the rural sector will face economic as well as social distress in the coming days as the returning migrants are not going to be welcomed in their native places.

“These people will be seen as liability now. There will be fear of health, unemployment, conflict, and competition for available food among other pressing issues. Our national output is wiped out for the next few months and the recovery will take time,” says Kannan. Lack of investment in agriculture and public health will have a debilitating impact on rural economy, he warns. For economist Jean Drez, the biggest worry at the moment is the state of Bihar, which will see the return of a large population of migrant workers. “Being a caste- and class-ridden society with huge numbers of landless labourers, the fallout will be huge for the state”, he says.

However, it’s Uttar Pradesh which sends out the largest number of migrants, according to India Migration Now, a Mumbai-based non-profit org­anisation. While UP accounts for an estimated 33 per cent of migrant lab­ourers in India, Bihar takes the second place with 15 per cent, followed by 6 per cent from Rajasthan. Delhi tops the list of top destination states, followed by Maharashtra, Haryana, Madhya Pradesh and Gujarat. 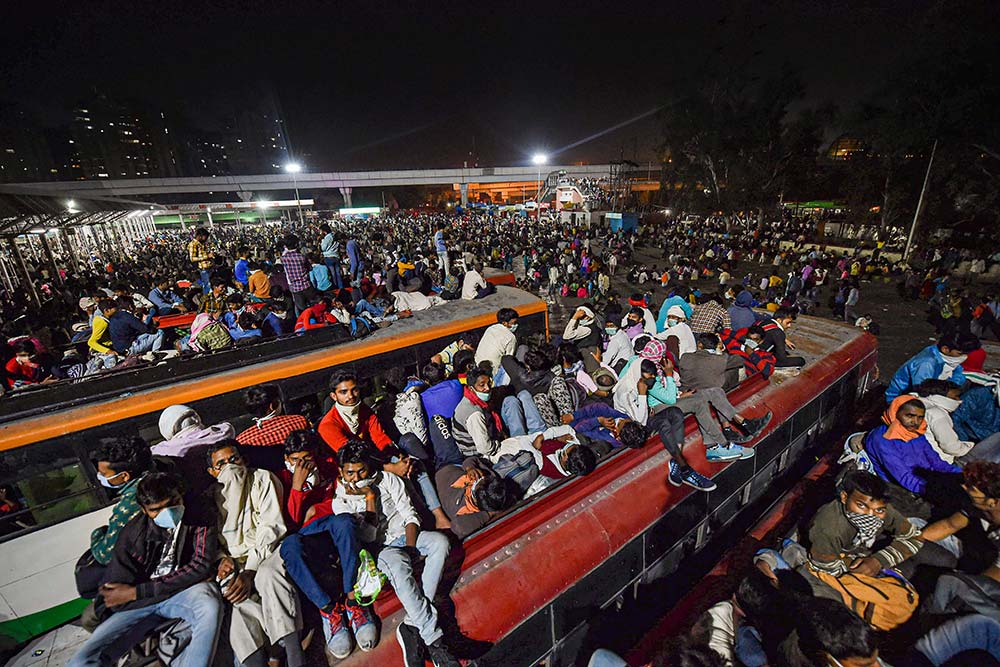 Drez says the central government should chip in with emergency measures as most of the announcements in the relief package will take shape only after the lockdown. “The migrants want to go back because they don’t feel secure here. They know that they will end up in jail or they will go hungry here. If the government wants them to stay put, give facilities and treat them with dignity,” he says. The government needs to pump in money for this informal sector, which contributes 50 per cent of the nation’s products, say experts. As most of them work in areas such as construction, textiles, rickshaw driving, domestic work and other such services, it’s also a well-known fact that they are the work horse or major drivers for/of the economy.

As the number of internal mig­rants recorded an upward trend over the past four decades, 2011 census data says India now has app­roximately 60-70 million mig­rant workers. “In 2011, a quarter of India’s urban population was enumerated as being migrants,” wrote author Chinmay Tumbe in his book India Moving: A History of Migration, to den­ote the key role played by migrants.

However, with remittances from mig­rants drying up now, the rural sector will face unprecedented crisis, says Jayati Ghosh, professor of economics at JNU. Remittances by migrant workers are estimated at Rs 1.5 lakh crore, acc­ording to the Economic Survey 2016-17.

Ghosh says effective intervention by the Centre in tandem with state governments is a prerequisite at this point. “Though we don’t know how many have managed to get back, the rem­ittances have stopped altogether. This is compounded by the fact that all the regulations are being interpreted and implemented shoddily,” she alleges. Apart from ensuring cash assistance and food to villagers, the government should enh­ance supply of seeds, pesticides, fertilisers and essential inputs for the farmers, as agriculture forms a major part of rural income, she says.

The surplus workforce is going to be a major worry, experts add. About 80 per cent of India’s workforce is employed in the informal sector, says the 2015-16 Employment-Unemployment Survey.  With the breadwinners of the family becoming dependents, it will add to the burden of the family, says Ritu Dewan, vice president, Indian Society of Labour Economics (ISLE).  “There’s alr­eady surplus workforce and now there’s more. There is additional burden of net producers now becoming consumers. People will start selling their assets and land to survive. The marginal farmers cannot reinvest in the land. So, future production is imp­acted, which in turn impacts future emp­loyment,” says Dewan.

Another migrant worker from Uttar Pradesh, Ram Kumar has no plans to return to the satellite town of Gurgaon, where he was a tailor. Kumar, who was visiting his family at his village in Bulandshahr, says he would explore job prospects in the village, though options are limited. Kannan says many workers will have to stay back as the economy takes time to rebound.

“Unfortunately, the economy is not like a health crisis. The economy needs a lot of things to get back into shape,” Kannan says. The uncertainty will continue till demand picks up and “many small ind­ustries will be shut. Only when demand picks up, they will be able to get back their jobs”, he predicts.

If the surplus workforce is going to be a problem in some parts, Punjab and Haryana are faced with shortage of labour with the beginning of the harvesting season. “Usually, this time agricultural mig­rants from UP and Bihar migrate to Punjab and Haryana. Unfortunately, they won’t be able to go this time. People who don’t have land are going to be in great difficulty,” says Drez.

The disruption in the demand and supply chain is going to hit the rural poor the most, fear economists. As the government claimed that they have enough stockpiles of food, immediate relief of free ration through the public distribution system is the need of the hour, they say. “The migrants should be helped with an immediate grant of minimum Rs 5,000,” Kannan says.

To ease the burden of the rural poor, Kannan suggests that more thrust should be given to NRGEA employment. Apart from expanding its 100-day limit, he says the government should also pay advance wages to all NRGEA workers. “Work can be res­umed when the situation bec­omes normal. Now, it’s time to pay wages in advance”.