Phaniswar Nath ‘Renu’, the journalist-writer, was an insider who told stories and reported on the backwardness of his home state of Bihar.

More from Sadan Jha
View All

In the default setting of the twentieth century, poverty became the most popular font of creativity. Along with inequality, backwardness, hunger, vio­lence and suffering as its Siamese twin, poverty fuelled the imaginations of scholars, activists, artists and writers alike. Phaniswar Nath ‘Renu’ was one among them. While the Hindi public sphere is busy celebrating Renu’s birth centenary this year, his oeuvre offers us innumerable provocations and an invitation to look into the rich cultural tapestry of how people live in poverty, scarcity and backwardness.

Widely known for his innovative techniques to depict subjectivities of the Kosi region of north-eastern Bihar, Renu (1921-1977) is recognised, appreciated, and criticised for propagating a new genre in Hindi—anchalik sahitya (regional literature). Anchored on backwardness, in Renu we find a unique coming together of regional particularities and universal appeal, making him distinct, provocative and forever relevant.

On the occasion of his birth centenary, I flip through the pages of his writings and pin down on his bold subversive moves. Whether it is his discomfort with the normative progressive stylisation of reality or his combative temperament vis-a-vis the canonical in literature, without this subversive energy, Renu’s writings, poverty-stricken society and Bihari personhood remain bereft of their souls.

Born in a lower caste family in the village of Aurahi-Hingna in old Purnea district, a land ravaged by the ferocious and frequent flooding of the river Kosi, Renu was a prolific writer leaving behind a rich corpus consisting of novels, stories, fictionalised reports (katha-reportage), memoirs and essays, reflecting on contemporary events of regional and national significance. He actively participated in politics at all levels (in school, in the Quit India Movement as a young adult, in instigations for the cause of democracy in neighbouring Nepal, and later, by contesting elections in the post-Independence era). Renu’s novels (two of his better-known ones are Maila Anchal, 1954 and Parati Parikatha, 1957) est­ablished him as one of the most experimental and rebellious writers of 20th century India. Renu’s long story Teesri Kasam urf Māregaye Gulfām was adapted for a film with the shorter title, Teesri Kasam (The Third Vow). What was new and attractive to Renu’s readers was the manner in which he represented the rural life. Some literary critics criticised Maila Anchal for its “corrupt language, immoral universe and the difficulty in translating it into other languages”. Renu inverted these criticisms and highlighted them as strengths. 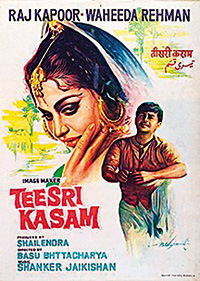 In the world of Hindi, he is considered a leading proponent of regional literature, and as someone who heralded a new era—the post-­Premchand phase. Like novels, his stories and katha-reportage offer us intricate portrayals of complex social realities where the world of the rural is linguistically plural, fractured along caste lines, spatially grounded and deeply political in its contemporaneity.

Renu was neither alone nor the first in this project of subversion. We have writers like Amrit Lal Nagar, Nagarjuna and Rahi Masoom Raza (to name only a few) who were his predecessors and contemporaries in moving away from the standardised literary formulae of writing fiction in Hindi, epitomised by Premchand. In addition, Renu was not following in the footsteps of his other contemporary colleagues like Mohan Rakesh, Yashpal, Rajendra Yadav, Nirmal Verma or to a great extent Sachidanand Hiranand Vatsyayan Agneya, who wrote from metropolitan urban sensibilities, harping upon alienation in a genre known as the Nayi Kahani movement.

Renu was in a constant battle against the singularity, flatness and standardisation of Hindi that came with the Khadi Boli movement of the late 19th century. The linguistic plurality of north India came under heavy attack, particularly in Hindi prose. In the new imposed hierarchy, Khadi Boli was bestowed with the status of a language, while Bhojpuri, Maithili, Magahi, Bajjika and numerous others were relegated to the status of mere dialects. Renu subverted this hierarchy and played with the plurality of languages, enabling the rural landscape its due polyphony. But he never insisted on the purity of any of these. Instead, he capitalised on the spoken, folk, living forms of these languages. Thus, at times, we witness six-seven language words in a single paragraph or sentence. His use of local language alongside Hindi endowed a strange sense of musicality to his works. In his novel Parati Parikathā, we come across disjointed, onomatopoeic words to achieve specific effects (“ha-ha-ha-r-r-r-r...! Guramguram — aan-aan-si-e-e-e-aan-gar-gar-guram”). His writings are replete with such examples of primitive musicality.

With these experiments, Renu pulls you out from the confines of grammar and dictionaries. As a reader, you find yourself standing in the middle of a village, face to face with social practices and in a landscape where you read as if you are hearing a cac­ophony. These experiments also make his writings difficult for an outsider to approach. Instead of dictionaries, you then need chrestomathy to grasp meanings. Unlike dictionaries, where the meanings are explained through etymological routes, chrestomathy values meanings by usage. This is why when Amitav Ghosh wrote his Ibis trilogy, he also compiled a small Ibis Chrestomathy. When George Grierson first translated different specimens of Maithili literature into English, he came up with a Maithili Chrestomathy. When Amir Khusrau was faced with similar challenges a few centuries earlier, he compiled Khaliq-bari. Unfortunately for Renu, we don’t have any such chrestomathy, which at times simultaneously leaves us enc­hanted and perplexed. The familiar world of rural backwardness becomes so unfamiliar.

And we find that Renu’s villages neither conform to the colonial administrator-ethnographer’s myth of stagnant, isolated and self-sufficient communities, nor followed the idyllic harmonious imageries of Mahatma Gandhi’s Indian village.

Maila Anchal’s Merigunj or Pranpur of Parati Parikathā are quite different from generic north Indian villages of Premchand’s Godan or Mehboob Khan’s Mother India. While Godan and Mother India’s rural landscape can be of any north Indian village, one cannot translocate Renu’s village even west of river Kosi. Can you find castes like Kol, Musahar, Dhangar or Tatma in Premchand’s villages? No! 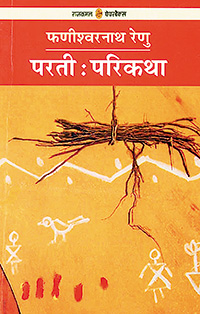 These characteristics make Renu an amazing chronicler, and his writings a thickly-layered archive of rural society, its everydayness, and by default, its backwardness and poverty. He does not stop there. For the portrayal of this rea­lity, he stands with the subaltern, the lower castes, their subjectivities and their vocabulary. This is why the moral world gets rev­ersed. In his short story, Naina Jogin, he is anxious about how to weave the cuss words so central to his character but which are otherwise censored in mainstream literature. With each reading, you peel a new layer of social reality in his corpus, making it classic in the sense in which Italo Calvino prescribes in Why Read the Classics? It never fades in its shine, remains relevant and contemporary. The social reality in such treatments gets magical. The line bet­ween fact and fiction gets blurred. This is particularly true in the case of his katha-repo­rtage, a genre of creative reporting. Here, the reality is not exaggerated but its irony is presented in such a manner that you start disbelieving it for fiction. When you talk of magical realism, you recall Borges and Marquez. Marquez always fashioned himself as a reporter. Someone who goes into the field and files a report: The Scandal of the Century or News of a Kidnapping. Marquez made us aware that “reality is a better writer than we are”. But his reports were not merely what he saw. He mixed his observations with rumours, language and his understanding of society. In many ways, Renu precedes Marquez.

From Bidapat Nach (1945) to Patna Jal-Pralay (The Patna Deluge, 1975), his katha-reportages make a huge archive of events, social life and cultural processes of Bihar.

If Haddiyonka Pul (A Bridge of Bones) deals with famine-smitten lowest strata of rural society, Sarhadke Uss Paar (Other Side of the Border) details the pathetic life condition of ind­ustrial workers in Biratnagar. In Haddiyonka Pul, you have lakkad-sungha, who would kidnap kids and also make arrangements for human sacrifice (balidaan) for the success of Howrah ka pul (Howrah Bridge). This is not a baseless rumour. The daughter-in-law of Tahlu Musahar, who came from Kursaha, says her fat­her himself saw a man offering baldaan (voluntary work) at the Kursaha bridge construction site. And we find a thread connecting Howrah with Kursaha, balidaan (human sacrifice) with baldaan (voluntary work), provoking us to adopt a fresh perspective on development and backwardness.

Renu is not the first to carry out such experiments. In 1946, we have a published collection of reportage by Rangey Raghav. Titled Tufaanoke Beech (In the Middle of a Storm), it was on the Bengal famine. We also find that Zainul Abedin had left a secure job as an art teacher in Calcutta, on his journey making sketches of the famine. Chittoprosad Bhattacharya and the legendary photographer Sunil Janah were also documenting the Bengal famine. But reporting such a catastrophic event did not mean a distanced, dispassionate and objective chronicling of reality. How can one stay untouched? The young Renu moves a step ahead. Unlike his contemporaries living in cities, he did not have to travel as an outsider. He had to document his surroundings as an insider. And, as an insider, he witnesses not merely poverty, famine and backwardness, but also joy, happiness and other aspects of life, which his contemporaries completely missed out. Therefore, Renu’s rural folks are not merely victim figures. When he takes us to the subaltern lower caste tolas (rural caste neighbourhoods), we don’t only come across histories of exploitation and resistance, as scholars of subaltern school tell us. We also hear the sound of drums, “manjiraa”, and the laughter of “biktaa” (jester) in Bidapat Naach. In Naye Sawere ke Asha (Hope of a New Dawn), we have a young socialist, Gyanchand, who is himself a son of a peasant. He was born in a village and was sent from the party top brass of the state capital, Patna, to lead a peasant’s march, yet he does not recognise different varieties of rice. Having sketched out such a disconnect between the political leadership and ground realities, Renu does not stop. When the peasants march past Raniganj, as five people join, increasing the tally to 555, and when the women cutting paddy in the field stop singing out of bewilderment — Kisnu plucks paddy bales from nearby fields and says — “See Gyaanu Bhaiya, this is Naazir, this is Raangi, that’s Basmati, Kanak-jeer… a call for pilgrimage is given. Come, let us march dear peasants. Thus sang people’s poet Chunnidas.”

This is Renu. In his writings, we have both a storyteller and a reporter of the backwardness of Bihar. Yet, there is no fake reality, no post-truth.