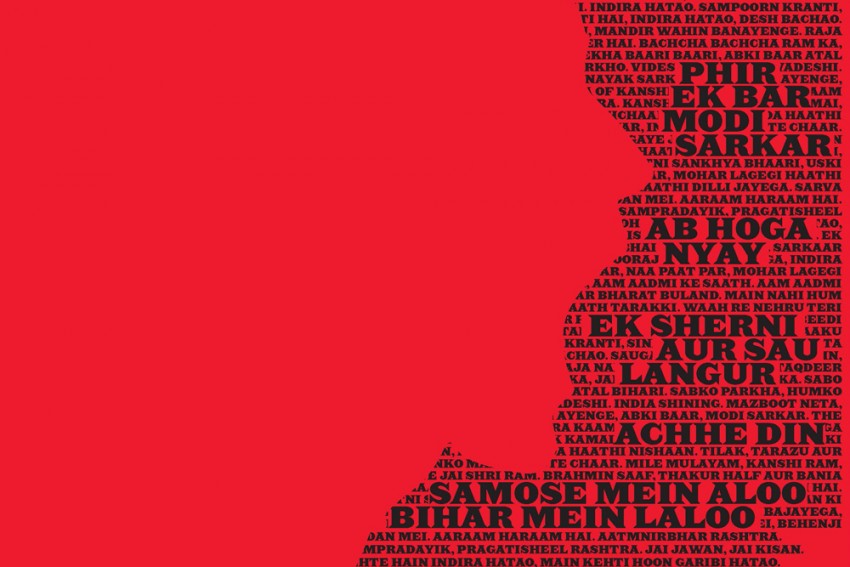 This ancient land of festivals sublime and gaudy, awash in colour and passion, had conceived its greatest celebration merely seven decades ago. In scale, scope and the sheer stakes involved, elections are our largest festival. One based on universal adult franchise, in which every Indian adult participates on an equal basis irrespective of caste, education, ideology, language, religion and wealth. The first general elections in 1952 included a ten-fold increase in the number of voters. The Election Commission of India met the challenge of ensuring a right for people to exercise their franchise by spreading the polling over 68 phases, from October 1951 to February 1952.

The sense of empowerment that this gave to people is reflected in the election posters of Daljit Singh, the Congress candidate for Safdarjung constituency in Delhi, in 1952, when he contested for a seat in the Delhi assembly. “The will of the people shall be the law of the state,” he ass­erted. Noor Uddin Ahmed, Congress candidate for Chawri Bazaar in the same election, highlighted the other major promise of the Nehru-led Congress: a stable, non-communal and progressive nation. Apna kimti vote de kar rashtra prem ka parichay dein (display your patriotism by casting your precious vote), was his tagline. Nehru, with his felicity with words, offered the much crisper slogan of Atmanirbhar Bharat ban­ayenge (we’ll build a self-reliant India). On balance, that was also the promise being made by the newly formed parties—Jan Sangh and the Socialist Party—opp­osing the Congress, as they asserted hum sab ek hein (we stand together) as a counter to any effort towards creating communal divisions. In the end, the Congress won 39 seats to the Delhi assembly, the Jan Sangh five and the Socialists two. 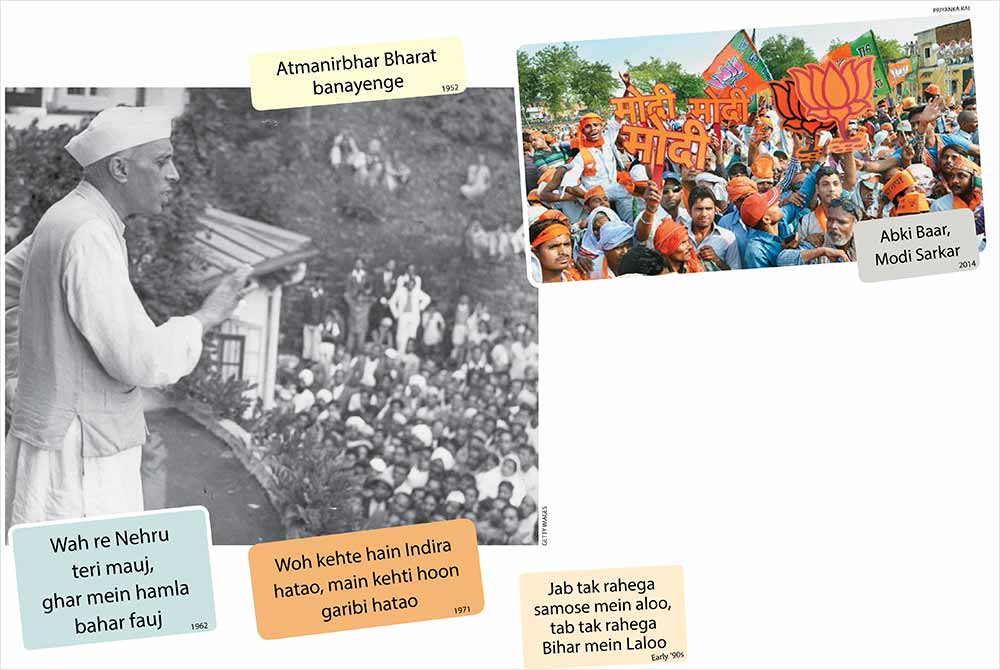 It was only when the policies of Nehru began to crumble in the coming decade did the Jan Sangh manage to become creative in its criticism of Nehru. Wah re Nehru teri mauj, ghar mein hamla bahar fauj (Nehru, while you have fun/the army is at the border, fighting attackers) they ridiculed during the third general elections held early in 1962, in response to Nehru extending a hand of friendship to China even as it occupied Tibet and cla­imed portions of India. Not that any of this made any difference. Nehru’s charisma held. Just over 55 per cent voters voted, returning a mere 14 MPs of the Jan Sangh as compared to 361 of the Congress. A few months later, in October 1962, the Sino-Indian war would begin and China, along with the famous peacenik Bertrand Russell,  claimed that it was Nehru who started it.

The scuffing that Nehruvian socialist utopia suffered from the 1962 border debacle was partly restored by the next PM, Lal Bahadur Shastri, who coined the still-rem­embered slogan Jai Jawan Jai Kisan. But even this could not fully restore faith in the Congress’s leadership role. The Congress seemed to have lost belief in itself too. Retaining power seemed to be its only objective. Indira Gandhi was foisted on the PM’s seat after Shastri’s unti­mely death in 1966 by the party old guard. Led by K. Kamraj and Morarji Desai, these battle-hardened politicians deemed Indira weak and submissive. ‘Progress through Congress’ was the only slogan they could offer for the 1967 general elections, plastered alongside Indira’s portrait. The Congress managed a majority in Parliament. But its number of seats had come down from a whopping  361 to 283. It also lost six state assemblies.

Indira’s shaky responses during the budget session of 1966 gave the ever irascible socialist Ram Manohar Lohia a chance to call her goongi gudiya (dumb doll). Prakash Karat, during the 2011 West Bengal assembly polls would similarly call Mamata Banerjee a goongi gudiya.  Within two years, Indira would snatch the soc­­ialist narrative by nationalising banks that held 85 per cent of all bank deposits in India. Before the end of her term, she would  marginalise all opponents, help carve out an independent Bangladesh, and give people a slogan that reverberates still in India’s political space: Garibi hatao (remove poverty). Mamata, too, responded by winning, then making Communists irrelevant in Bengal.

The Jan Sangh, India’s foremost opposition party in 1967, came up with tepid jingles like Jan Sangh ko vote do, Beedi peena chhod do; Beedi mein tambaku hai, Congress wala daku hai (There’s tobacco in beedi, and Congressmen are dacoits). During the 1971 elections, the Sangh was at an even greater loss for words. It could not craft anything better than the bland plea, Indira hatao, or remove Indira. Only a few voters agreed. 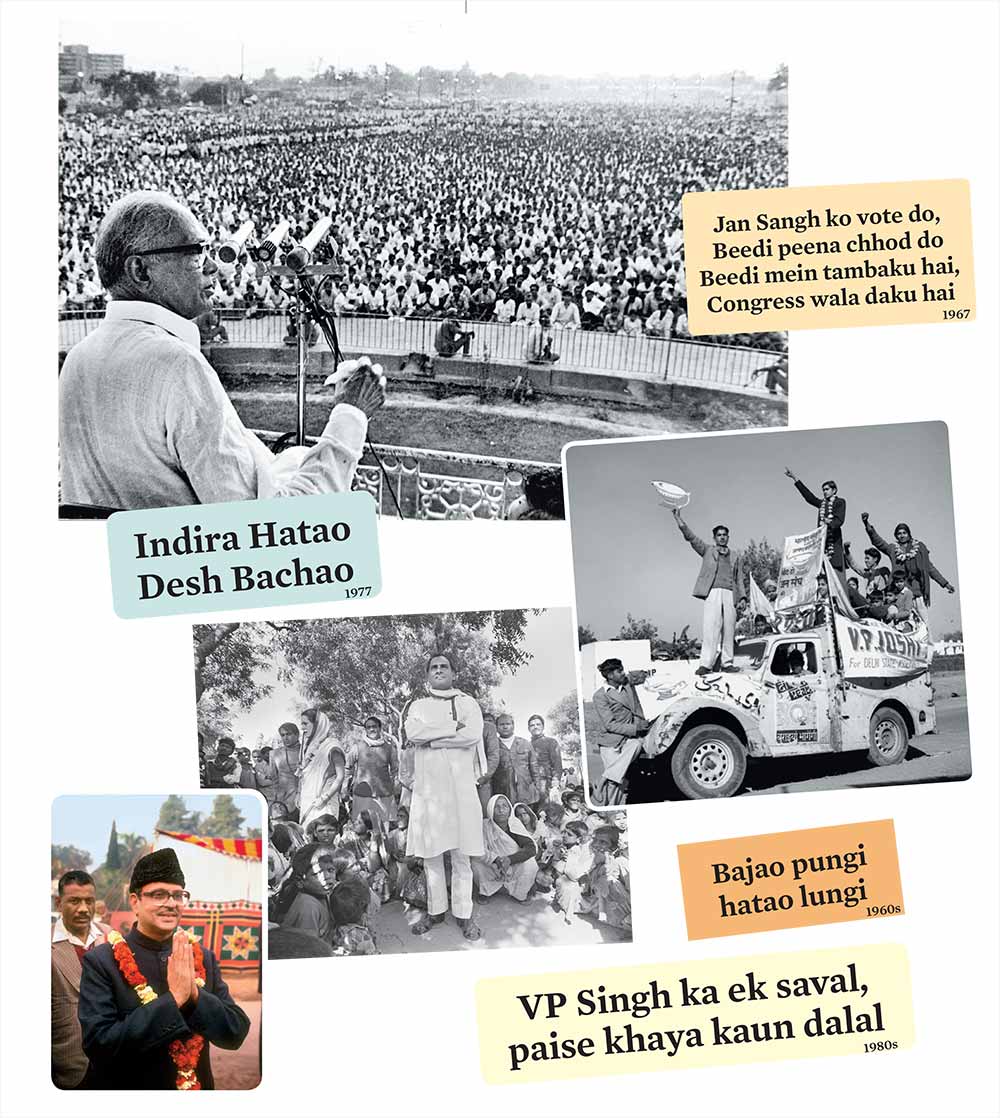 Some years later, Indira’s rule began imploding. People were fed up of everyday corruption and the government’s inaction. Disaffected students sought out the leadership of Jaya Prakash Narayan to bring about a ‘Sampoorna Kranti’, a ‘complete revolution’. Indira responded by imp­osing Emergency. The post-Emergency election in the spring of 1977 that heralded the arrival of Chandra­shekhar, Laloo Yadav, Mulayam Singh Yadav  and Sharad Yadav repeated the Indira hatao slogan, but with an added phrase, desh bachao­—save the country. The Congress was warned by the newly created Janata Party with the slogan Sinhasan chhodo, ki Janata ati hai (abandon the throne, the public is coming).

The connection between the Congress and common Indians seemed to weaken further with Rajiv Gandhi taking over as PM. At this juncture, Rajiv resorted to professional advice on electioneering. His 1989 election campaign served up images of scorpions and snakes (untrustworthy serpents and vermin) directed at the challenge thrown to Rajiv by his former confidant V.P. Singh. The challenger’s response was to remind people of the Bofors gun deal, in which Rajiv was said to have taken a Rs 64-crore bribe. In many localities, woo­den logs were placed in the shape of mock guns to hammer in the message that children shouted in streets: V.P. Singh ka ek saval, paise khaya kaun dalal (V.P. Singh has one question, which broker ate up the money)? Rajiv was mocked at with ano­ther pithy slogan, Galon mein jo lali hai, Topon ki dalali hai, attributing the prosperity of the Gandhi family to money made in the Bofors deal. V.P. Singh, a most retiring politician and erstwhile ruler of a puny princely kingdom, was hailed with the slogan, Raja nahin faqir hai, Desh ki taqdir hai (He’s not a king but a fakir; he’s the nation’s future).

As elections became more fiercely contested, slo­gans became more aggressive in India’s political discourse. In December 2002, the ever gentle L.K. Advani had no moderating influence on Narendra Modi, then the caretaker chief minister of Gujarat, when Modi repeatedly referred to ‘Mian Musharraf’, a derisive reference to the president of Pakistan. The jibe at Musharraf was for the Pakistani president chiding Gujarat  for not being able to control communal riots earlier in the year. This was the first time when Modi accused the Congress of being the voice of Pakistan rather than that of Indians. Public rallies during the 2002 polls were also the first indication that the electorate responded better to Narendra Modi than to Advani or even the then prime minister, Atal Behari Vajpayee.

The Congress responded with Sonia Gandhi calling Modi a ‘maut ka saudagar’, a trader in death, during the 2007 Gujarat assembly elections. The BJP won 117 seats to the Congress’s 59 in that election. The tastelessness of that slogan was only matched with BJP’s demand for a ‘Congress mukt Bharat’, an India that was free of the Congress in the run-up to the 2014 elections. 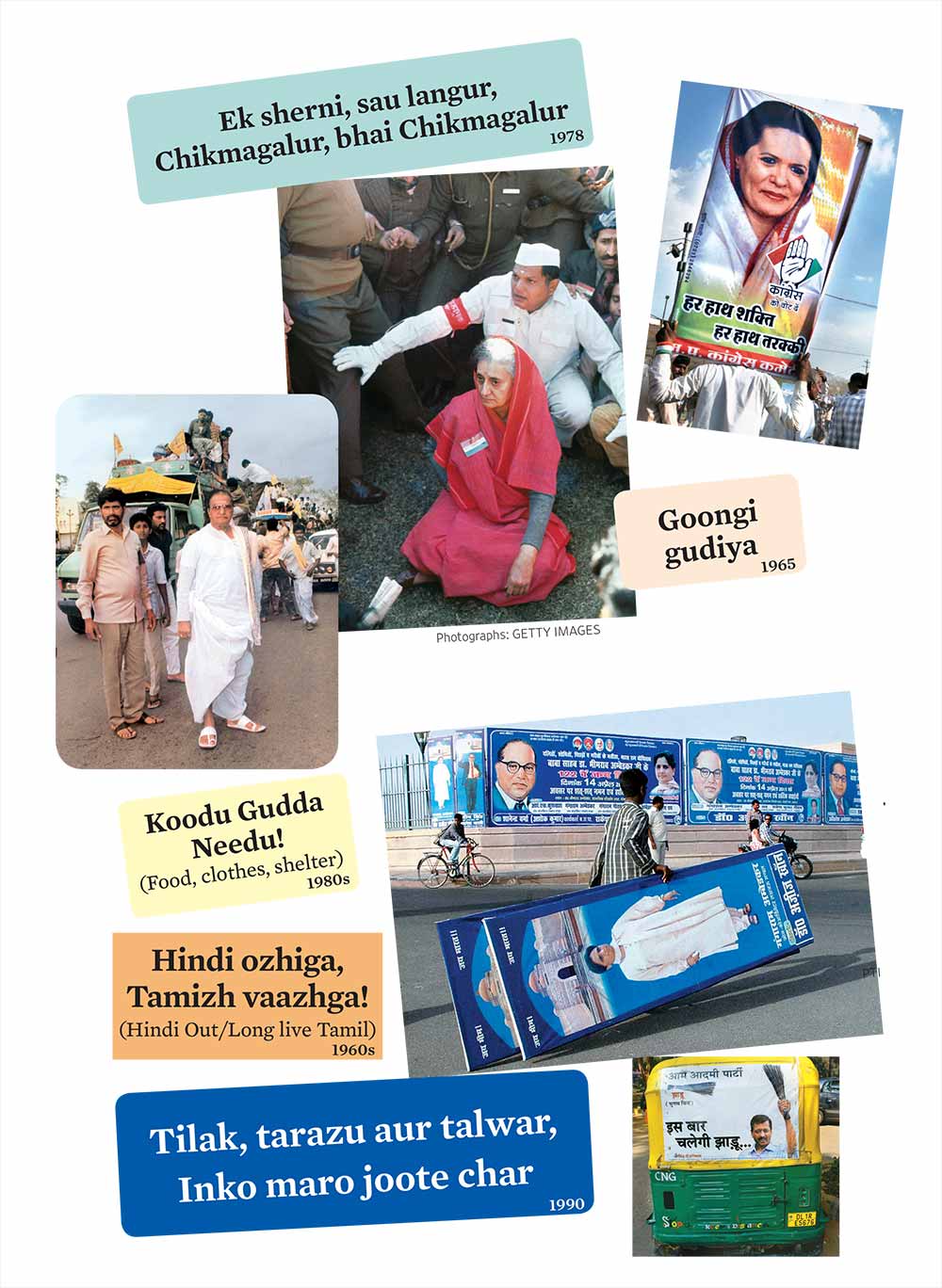 In contrast to the major parties, political sloganeering by minor parties was even more aggressive and tawdry. The Shiv Sena during the 1967 elections in Maharashtra would pick up Balasaheb Thac­keray’s bajao pungi, hatao lungi (strip off the lungi, sound the trumpet), to denigrate south Indians in Mumbai. Earlier, during the agitation to carve out an independent state of Maharashtra out of the colonial province of Bombay, anti-Gujarati sentiment was expressed in the street jingle Su chhe, saru chhe, danda le ke maru chhe, (how are you, I am fine, I will hit you with a stick). Kanshi Ram in Uttar Pradesh, hoping to establish a political presence for the nascent BSP, would urge his voters with Tilak, tarazu aur talwar, inko maro joota char (a symbolic appeal to boot out Brahmins, Baniyas and thakurs) in the early 1990s.

In recent times, politicians like Narendra Modi seem to routinely create memorable phrases. But the prize for making tall promises and then actually coming good on them goes to the politicians of the south. C.N. Annadurai in the 1960s used to promise Rupay­kku munru pati arici or ‘three padi rice for a rupee’. Sensitive to price spikes, the slogan would be rewri­tten as oru padi nitchayam, moontru padi latchiyam (one padi is for sure, three padi is our aim). India’s unstable economy of the 1960s would not allow even this promise to be kept substantially. However, it did seize the imagination. A few decades later, Tamil Nadu would become the first state in India to provide people with low-cost grain.

When M.G. Ramachandran campaigned, he used to be described as Aayirathil Oruvan, or ‘one among thousands’. In 1965, a film of the same name was made—the first to pair J. Jayalalitha and MGR. It became a cult hit, with rousing dialogues on injustice and the portrayal of a true leader who can help people get justice. It was re-released in 2014 to bolster the electoral fortunes of Jayalalitha, who was now the chief minister of Tamil Nadu. MGR had by now acquired reverential status as idaya deivam (lord of our hearts) and Jayalalitha was referenced as puratchi thalaivar (revolutionary lea­der). “Any CM can do good things, but only Amma can do god things”, went one claim in 2014.

In the high-risk, high-stakes business of politics in India, everything is kosher so long as the people love it. But, for most part, slogans and election speeches are a form of entertainment, a sort of facetious humour. Hardly anyone takes them ser­i­ously and they do not necessarily swing votes. No one holds politicians to their promises either. Slogans, though, do provide a glimpse of the tem­­plate along which the mind of the politician—with whom the slogans are connected—works. In case a slogan resonates, those analysing political processes and measuring the popular temper presume it to be an ind­­icator of the prevailing mood. Do political slogans influence voting patterns? Can their poisoned barbs, masquerading as cheeky wit, be able to convince voters? Or are they just baubles decorating the poll sea­­son? Only voters’ positive admissions can be counted as ayes.

Shoot Me With A Slogun