Dissent is a right and one that is guaranteed by the Constitution of India but on an operational level, it is a forbidden fruit, writes Shahid Lone of Jamia Millia Islamia University 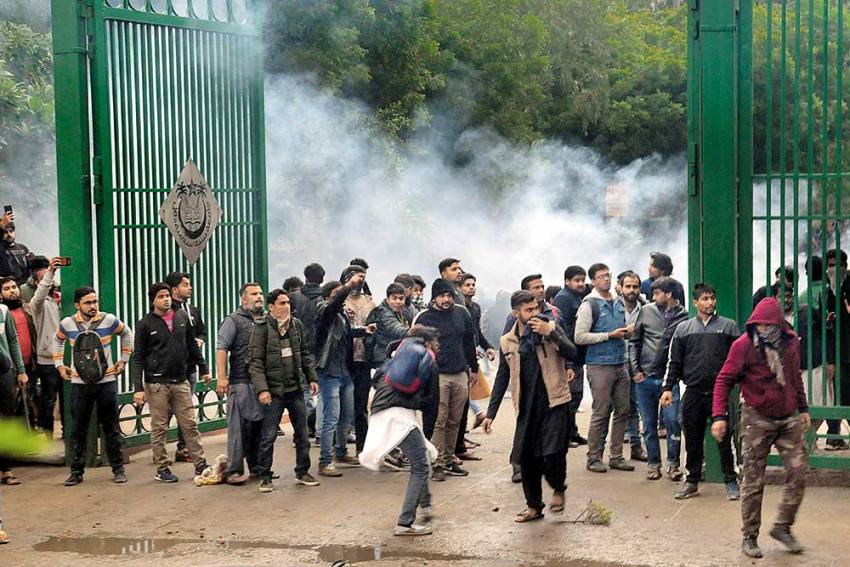 Shahid Lone December 19, 2019 00:00 IST OPINION | Politics Of Fear Has Been Deeply Entrenched In The Social Fabric 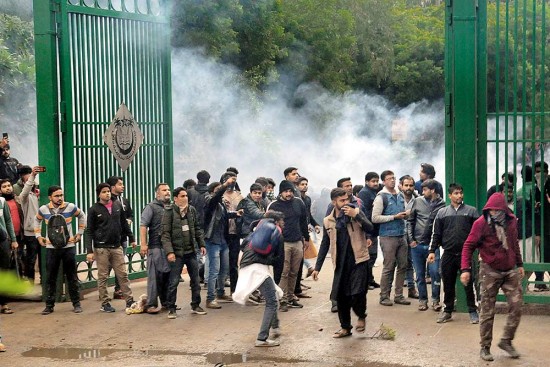 Indian Muslims are living their most horrible yet defining moment in post-Partition history: doomed if they don’t resist the threat to their existence and damned if they assert their identity in the grotesque secular-Hindutva political chessboard. Given the trajectory of events in past six years, we can say ‘Allah o Akbar’ is to the Indian State what philosophy, centuries ago, was to Catholic Europe—a blasphemy! Being Muslim in India is a blasphemy for which one could be put to death with impunity.

Philosophy eventually acquired the place of the white moon, second only to the shining sun, and came to shape modern Europe’s destiny. Will the white moon rise over Muslims or will they be consumed by the darkness India has descended into? Well, if the iconic images of Jamia Millia Islamia’s protesting female Muslim students and their incisive clarity on the subversion of Muslim politics in the post-colonial Indian imagination conveys anything, this is indeed the beginning of a new dawn.

The brutal state aggression on students of Jamia and Aligarh Muslim University (AMU) on December 15 came barely a few hours after PM Modi’s election speech in Jharkhand, in which he said, “You can recognise protesters from their clothes.” The “topi and burqa”, visible sartorial signifiers of a specific religious community—Muslims—in light of Modi’s statement is a telling message to the majority of Indians and the state forces that the protesting community is pre-identified. And how do you deal with such a community? Given the nature of the ruling dispensation, repeating history suits it best. A heartless modus operandi, tried and tested in the ‘Gujarat carnage’, was put to test. The vicious public display of police storming two Muslim-minority universities, firing tear-gas shells for hours, with mainstream media at the State’s disposal to fabricate narratives, signals the new normal in Hindu India.

Iconic images of Jamia students ­protesting ­convey the ­beginning of a new dawn.

A recent study argues that the police perceive Muslims as criminals who deserve dehumanising, even vigilante, punishment. Amid such a hostile mapping of Muslims, police violence is not aimed at quelling protests, but to instill fear in the hearts and minds of the protesting community. Fear psychosis is the USP of the BJP-led government, and the politics of fear has been deeply entrenched in the social fabric. At its receiving end are Muslims. The deafening silence of Muslims in the public domain for the past six years, despite mob lynchings, criminalisation of triple talaq and the Babri Masjid verdict, reflects how perverse the Indian polity and its institutions have become for Muslims.

Dissent is a universal right, and also guaranteed by the Constitution of India—except that, on an operational level, it’s forbidden fruit. Why is it that students in JNU, Delhi University or other universities in India, do not get to face state terror of the kind unleashed on Jamia and AMU? Jamia and AMU are viewed through their Muslim minority character, and vilified as hubs of terrorists. There is a word for this: Islamophobia—i.e. anti-Muslim racism. The coming of age of a new generation of Muslims, who consciously assert their identity in the public sphere and are unwilling to submit to dehumanising treatment by the State, brings to light how the deeply structural and pervasive Islamophobia in India unfolds. This explains why within 48 hours of police barbarism, three Muslim universities (Jamia, AMU and Nadwa in Lucknow) were forced to close down, unlike what happened during protest demonstrations after the JNU sedition row in 2016.

The students from Jamia and AMU led the protest demonstrations against the amended citizenship act because it poses an existential threat to their larger community. Parading of students and viral videos showing the police vandalising university property and damaging private vehicles reflect how the State wants only total submission from the second-class citizens of this country and won’t care about their properties when it comes to enforcing its writ. On the other hand, the growing protest demonstrations by Muslim students despite facing lethal state terror indicates that they are done with the process of internalising fear, which was initiated by the Congress, as well as with the politics of patronisation by the privileged.