Opinion | Stones, Blades And Sticks: 92 Rapes In A Day, And The Thought of Justice Hanging On A Tree

Capital punishment for rape leaves me more scared than before -- for self and society -- writes poet-playwright Annie Zaidi, after the Nirbhaya hanging. 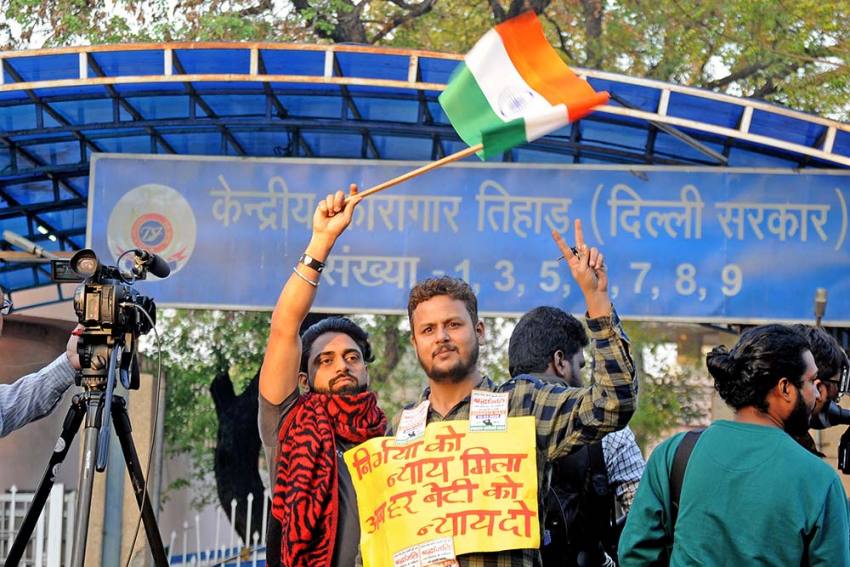 Justice Relayed
Citizens exult in front of Delhi’s Tihar jail after the executions
Photo by Jitender Gupta
Annie Zaidi March 27, 2020 00:00 IST Opinion | Stones, Blades And Sticks: 92 Rapes In A Day, And The Thought of Justice Hanging On A Tree 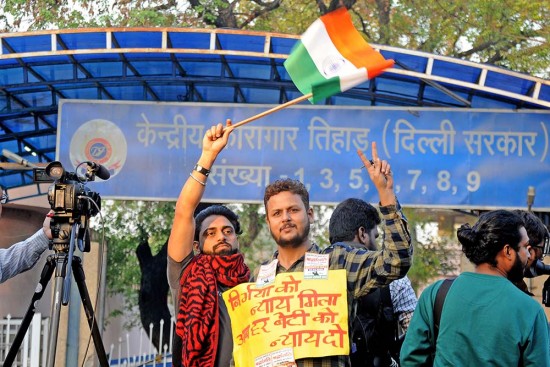 I often make lists. Words, lined up neatly on a page, add up to something—meaning, or purpose. Some lists, however, add up to numb horror. Sample this:

2013 College student. Abducted while she was walking home, gangraped in a factory. They slit her throat after tearing her up between her legs, up to her navel. They called it the Kamduni rape case.

2014: More than one case from Badaun has made headlines, so they call it the ‘Badaun sisters’ case. Two teenage girls strung up on a tree. Post mortem report initially said rape and death from ‘strangulation while still alive’. CBI report later said, no rape. Three men arrested, granted bail. (In the other Badaun case, the victim struggled to get the police to file a report, then killed herself)

2014: The Sowmya case. Fatal head injuries. Thrown off a train and raped. The accused, a history sheeter, was sentenced to death, but commuted to life imprisonment by the Supreme Court.

2015: Man accused of raping a five-year-old child. He was the victim’s neighbour. The Supreme Court commuted the death sentence to life.

2015: Woman abducted, gangraped in Haryana. Stones, blades, sticks forced inside her. Seven men sentenced to death. The eighth was a minor. One killed himself.

2015. Manipur court sentenced someone to death for raping and murdering a four-year-old.

2016: The Jisha case. Law student killed inside her own home, her body badly mutilated. Reports mention ‘intestines’, like in the Nirbhaya case. Death sentence.

2016: Delta Meghwal’s body was found in a water tank. She lived in a hostel and had supposedly informed her parents about being raped by a PT teacher. Police allegedly took away her body in a municipal garbage vehicle. Three men booked for abetment of suicide, not for rape or murder.

2019: Six-year-old in Tonk raped and strangulated with her own school uniform belt.

2019: In Bharatpur, eight men arrested for killing an eight-year-old boy. They tried to rape the child’s mother, who is disabled. The child had tried to protect her.

2019: Woman set on fire while she was on her way to testify against her rapists. The case was from Unnao, but it cannot be called the Unnao rape case because there’s more than one.

In the other case, an MLA was the accused rapist. The victim’s father died after being taken into police custody. Ultimately, the victim herself was in a suspicious road accident that nearly killed her. The MLA got ten years for rape.

Which crime was rarer, which more horrific? We can’t be certain, but we can wager a guess about who will be executed based on how much property they own, individually and collectively; local caste equations; the investigating officers’ integrity. Consider the 2018 Kathua case. Eight-year-old Asifa was abducted, raped, killed inside a temple. Seven men were arrested, four of them police officers. Nobody got the death penalty.

Which aspect of this case was most heinous? The child’s age? The venue of the crime? The fact that several people actually took out rallies in support of the accused? Or the fact that policemen had conspired and they got only five years.

Individually, and in gangs, men emulated tortures they heard of during coverage of the Nirbhaya case.

We like to believe that justice is served when a murderer goes to the gallows. Death offers closure. It also shields us from the awful truth that a society where such crimes happen with alarming regularity is broken, and requires a drastic overhaul. We experienced it as broken in 2012, when details of the Nirbhaya case emerged. The masses roared on the streets, demanding that something get fixed. The accused were arrested, and seven years later, have been executed.

Someone mentioned videos. I didn’t want to look. I didn’t want any more detail about those men. Already, I find it hard to forget that they were desperate to stay alive, filing appeal after appeal. I confess, I don’t know what they deserved. Fourteen, twenty-five or fifty years does not seem to balance the scales of justice. But it is also true that I feel neither relief nor cheer. I feel weary, and much, much more afraid than I was in 2012.

The cases I’ve mentioned above are a tiny selection from English press reports. Some of those ‘rarest of rare’ crimes were undertaken after the accused in the Nirbhaya case were arrested, and people were baying for blood. A death sentence was almost a foregone conclusion. Yet, the rarest of rare crimes recurred. Individually, and in gangs, men emulated the tortures they heard of during media coverage of the Nirbhaya case. One thing was different though: they made sure to kill the victims.

In Uttar Pradesh, a 2019 report mentions five incidents where rape victims were burnt. Unnao, Fatehpur, Chitrakoot, Sambhal. In Bihar, a 16-year-old’s body was found with the head hacked off and burnt with acid, making identification difficult. The police called it an honour killing, but there were protests from people who allege a faulty probe. In Telangana, a veterinarian was gangraped, killed, the body burnt. Investigations were not even concluded, when the police shot the accused dead in an ‘encounter’, after the men supposedly tried to flee. We are expected to simply trust the police version of events.

Let’s recall the Ayesha Miran case then. In 2007, in Vijaywada, a 19-year-old student was raped and murdered in her hostel bathroom. A man called Satyam Babu was arrested. He was accused of fleeing from police custody, but was quickly ‘apprehended’. A lower court sentenced him to fourteen years imprisonment, even though he had a disease that didn’t allow him to walk properly. He alleged third degree torture, and had to be carried into court hearings. Even the victim’s family wasn’t persuaded; they said that the police had implicated Babu in order to shield another man, who was politically connected.

If it can deter perpetrators, why no demands for the death penalty after riots?

In 2017, a High Court judgment acquitted Babu, and awarded compensation for having imprisoned him for eight years. The CBI was ordered to investigate. In 2019, a news report suggested that the politically connected person was interrogated. Not arrested. Not given the third degree. Definitely not taken to a spot that was neither his home nor a police station, where he might do something that would require someone to shoot him in self-defence.

What if Babu had been given the death penalty or was ‘encountered’ by the police during his alleged escape bid? And how many rapists were deterred through his torture and incarceration?

In 2017, India was reporting 92 rapes a day. Rape is discussed in newspapers and on TV often because it is clubbed with murder and torture, and grave familial betrayals. Men have raped sisters and nieces. The rape and torture of men in custody barely make the news. Is it because that kind of crime is not ‘rare’, or do we not view it as crime at all? And if it can deter perpetrators, then why do we not hear loud demands for the death penalty after riots or pogroms?

We sort of know. Police, judiciary, politicians are human. At their best, prone to prejudice and egotism; at their worst, rapists and torturers. We would do well to remember how racism has coloured law enforcement in the global west. The case of the ‘Central Park Five’ in the US is warning enough. Five teenage boys were accused of raping a white woman in 1989, beating her badly and leaving her for dead. In 2002, all five were exonerated, after the actual rapist confessed.

That we are in a hurry to take a life because we believe a man guilty does not say much about our thirst for justice. It might say something about us being in denial about our own limitations. We are not God. We cannot bring anyone back to life. And if the idea of executing the innocent does not appall us, there is very little left to say.

(The author’s views are personal)

Annie Zaidi is a Mumbai-based writer of essays, reportage, stories, poems and plays