Opinion | Not COVID-19, Racism Is A Virus That Knows No Cure And India Is A Hotspot

Northeast natives face racist slurs, assaults across India. They have been guilty of reverse-racism in their own states, writes journalist Anupam Bordoloi 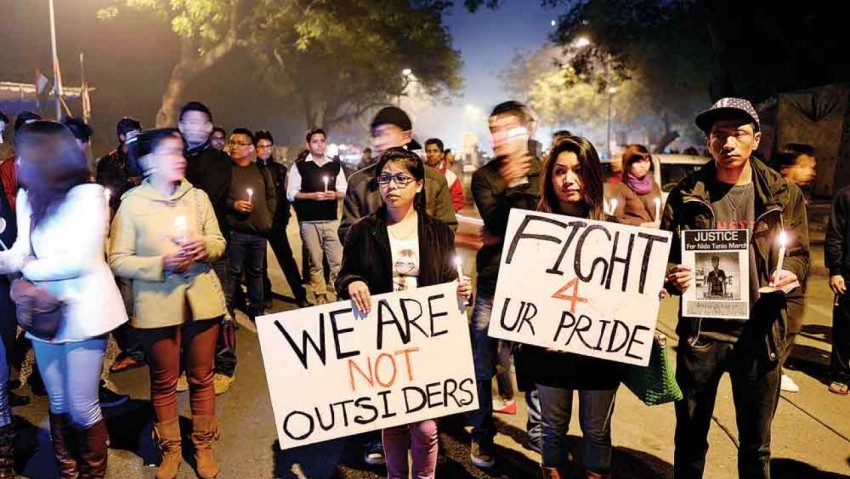 Racism is a deadly virus. A global scourge that has no known cures yet. Its manifestations are ugly, even fatal. And who would know that better in independent India than a native of the Northeast—that part which is still mysterious and exotic for many of their countrymen. It’s not familiarity which breeds contempt here—it’s the lack of a capacity to be familial. An outright refusal by “mainland India” to see beyond its nose, to truly understand and appreciate anything beyond what it already thinks and knows. Here, they are presented with a diverse people, with div­erse cultures, languages and food habits, with one commonality: that for all of them, their home is not a remote corner of a huge country, but the centre of their universe.

But racism is a global pandemic, and also a local one. Taunts, abuses and even physical assault directed at people from the Northeast, with distinctly Mongoloid features, are a symptom that any roadside checking can catch. Just the other day, a Mizo girl, apparently a student, was accosted by a woman at a Pune department store. For the Pune woman, the Northeast girl was a “Chinese”, a carrier of COVID-19. Her abuses, caught on mobile phone video and widely circulated online, were only the latest proof of supreme ignorance. In Delhi, another inc­ident saw racism and sexism at work tog­ether when a 40-year-old man spat at a woman from Manipur and called her “corona”, following on some lewd comments. (The man has since been arr­ested, mercifully) That was no exception. Angelica Aribam, a former general secretary of NSUI and gender activist from Manipur, was viciously trolled on Twitter recently—inter alia, she was called a ‘chinki’, one of the most frequently used racist term to target people with Mongoloid features. She too filed a police complaint about it.

Northeast nat­ives face racist slurs, assaults across India. They have been guilty of reverse-racism in their own states.

The inherent racism among Indians—against even other Indians—shows up often. Even inadvertently. Like a tweet by Ashok Swain, whose bio says he is a Professor of Peace and Conflict Research at Uppsala University in Sweden. He faced a backlash, mostly from Northeasterners, when he tried to compare “exotic” Chinese food habits with “Frogs in Sikkim & Goa, Red Ants Chutney in Chhattisgarh 3. Snail stew, steamed hornet larvae in Nagaland 4. Dog meat in Nagaland, Mizoram & Manipur 5. Pig Brain in Meghalaya 6. Silkworm curry in Assam”. A rough ethnography that ended up, doubtless inadvertently, appearing even more racist. So widespread have been such ins­tances that political leaders of the Northeast have often appealed to the Centre to take harsh action against these racist attacks. A small irony there.

Northeasters who live across different cities of India, for work or study, face such racism almost daily. Sometimes even ending in tragedies. Like the case of Nido Tania from Arunachal Pradesh, who died after he was assaulted in Delhi’s Lajpat Nagar in January 2014, following an alt­ercation over his hairstyle. He was 19. The death led to the creation of a Special Police Unit for the North East Region (SPUNER) in Delhi, and a dedicated helpline for members of the Northeast community in the national capital.

The virus of racism, however, continues to claim more victims. Even internally. This is another, often overlooked part of the story. When the victim is also the accused. Large sections of Northeast nat­ives have been guilty of the same racism in their own states, when they have acted with utter contempt for the “outsider”. In a region with close-knit societies, the “outsider” is often seen as the aggressor, the usurper. And this sentiment has often led to racist behaviour. I can say this with conviction as I have been part of the same society which sees an “illegal Bangladeshi” in every Bengali—even if Assam has had a turbulent history on the issue of illegal immigration. In Meghalaya, Bengalis have faced racist taunts and even hate crimes for just being an dkhar, an outsider in Khasi. The Bihari migrant worker—who pulls our rickshaw and builds our homes—is often seen as the lowest form of life, abused and insulted by anyone who wants to. In the height of the anti-CAA movement in Assam, a widely-circulated video clip showed a group of Bihari migrant workers being abused by some women for not “speaking in Assamese while you work in our state”. If that’s not racism, what is? It’s only a matter of time before humanity wins the war against coronavirus. If only we could hope the same for the virus of racism.

Opinion | All That Glitters Is Not Gold. Why Fiscal Stimulus Have Limitations