OPINION | 'Judicial Opacity On Women's Entry In Sabarimala Is Troubling'

The Sabarimala verdict is a setback to the struggle against a dehumanising prohibition, writes professor Kalpana Kannabiran 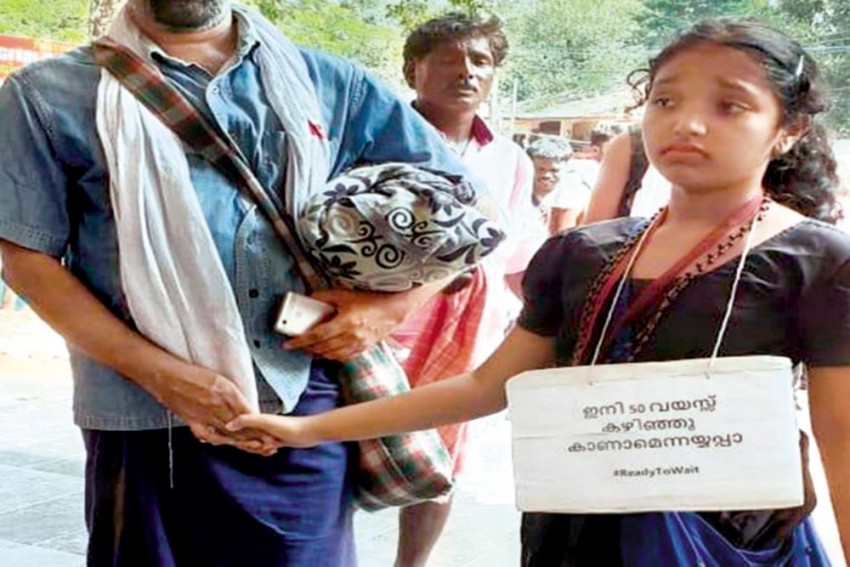 Proscribed
A nine-year-old girl waits outside the Sabarimala temple with a placard that reads: “Ready to wait. Will visit the shrine after I am 50 years old.”
Kalpana Kannabiran November 20, 2019 00:00 IST OPINION | 'Judicial Opacity On Women's Entry In Sabarimala Is Troubling' 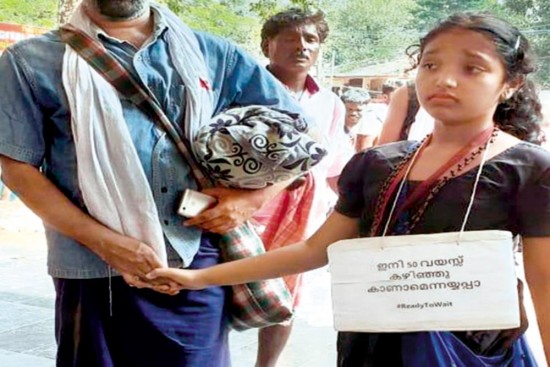 It was just days before Chief Justice Ranjan Gogoi retired that the Sabarimala review petition was decided by a majority of 3:2. The September 2018 judgment—a 4:1 majority decision in favour of women’s entry into the temple—now goes before a larger bench for a relook. It is apt, when we consider these contrary outcomes, to recall some basic tenets in constitutional interpretation set out since 2009, marking the turn towards “transformative constitutionalism”. These include: the consideration of analogous grounds of discrimination as impermissible (i.e. any form of discrimination akin to what’s clearly listed as illegal, say untouchability); the principle of non-retrogression in the delineation of fundamental rights (i.e. a right, once granted, cannot be reversed); the unequivocal rejection of the de minimis argument (that something is too trivial for the law to consider) in keeping exclusions in place; an expansive reading of the Ambedkarite formulation of constitutional morality; and the unanimous 2017 declaration by a nine-judge constitutional bench that the right to privacy (which, the apex court elaborated, meant dignity, autonomy, choice and the right to be left alone, free of surveillance) is a fundamental right. Each of these principles is immediately relevant to how the Sabarimala case is moving.

The intervening year between the two judgments has seen women’s attempts to enter the temple des­pite violent threats, ferocious trolling, hate speech and securitisation of the hill and its environs “like a police camp”. The Constitution and the Supreme Court pale into a haze in this muscle-flexing and chest-thumping.  The nation becomes a mere dangal. Last week’s judgment, mostly reiterating the reasoning of Justice Indu Malhotra’s dissent in 2018, is a setback on many counts.

Women ­have been trying to enter the temple ­despite threats. The hill is now like a police camp.

There is a protocol for rev­iew petitions: they should be circulated to the same bench that delivered the judgment, the basic purpose being to rectify an error of judgment or a miscarriage of justice. However, CJI Gogoi—not part of the 2018 bench—announces a departure from that right in the opening para, saying several new writ petitions were tagged on to the rev­iew: “The endeavour of the petitioners is to resuscitate the debate about what is ess­entially religious, essential to religion and integral part of the religion” (para 2). While this is itself an overreach, in the next para, he extends the question to Dawoodi Bohra women, Muslim women’s entry into mosques/dargahs and Parsi women­—cases that are sub judice and specific, and which, no doubt, must be ruled in favour of women’s claims to equal personhood. But this cannot be done via an omnibus “judicial policy befitting to [the court’s] plenary powers to do substantial and complete justice” (para 3).  The policy must be enunciated on a case-by-case basis with recourse to precedent, settled law and principles therein as and when the matters are brought before the court.

Besides, the judgment raises the question whether the Kerala Hindu Places of Public Worship (Aut­horisation of Entry) Rules, 1965, governs Sabarimala at all.  For those of us who have followed and celebrated the victory of struggles for temple entry a century ago, struggles that are foundational to the Constitution, this is deeply shocking, especially because the specific case of places of public resort is covered by Article 15(2). Exclusion on grounds of menstrual taboos of pollution can be seen as an expression of untouchability proscribed by Article 17 (as Justice D.Y. Chandrachud held), or that it is analogous to practices of untouchability (as Amit Bindal has recently argued). Either way, it attracts Article 15(2), especially after “analogous grounds” have been recognised as discrimination. Justice R.F. Nariman, speaking for himself, and Justice Chandrachud reiterate 2018’s majority rea­soning, outlining the “greatest common measure of agreement” along the following lines: that Ayyappa devotees do not constitute a separate religious denomination under Article 26; that Article 25 guarantees “equal entitlement of all persons to profess, practise and propagate religion”; that exc­lusionary practice, “even if it be founded in religious text, is subordinate to the constitutional values of liberty, dignity and equality;” that “[n]otions of ‘purity and pollution’, which stigmatise individuals, have no place in a constitutional order;” that the Devaswom Board’s 1955-56 notifications prohibiting women’s entry are ultra vires Section 3 of the Kerala Hindu Places of Public Worship Act, and are even otherwise unconstitutional. On whether the prohibition of women between ages 10 and 50 is an “ess­ential religious practice”, Justice Nariman clarifies that it must refer to essential Hindu practices and not specific practices of particular temples. “Nothing has been shown to us…from any textual or other authorities” that such exclusion is the religion’s essential part. In general, he found the arguments presented for review were “a mere rehash” of past arguments and “can by no means be said to be an error apparent on the face of the record”.

The court has not stayed the 2018 ­verdict. But will women be allowed to worship in the temple?

Four of the five judges who delivered the 2018  judgment were on this review bench.  Three held their earlier position—Justices Malhotra, Nariman and Chandrachud. Inexplicably, Justice A.M. Khanwilkar, who signed with then CJI Dipak Misra in favour of women’s entry in 2018, reversed his pos­ition without explaining the reasons—whether error or misjudgment. As he has not authored a judgment in the 16 Constitution benches he has been part of, we have no way of deciphering his individual view. His reversal is critical in overturning the majority view. It could well have been 2:3 instead of 3:2. This judicial opacity is troubling, to put it mildly.

The court has not stayed the 2018 verdict, and it is reasonable for women of all ages to presume they can worship in the temple if they so wish. Will they be allowed to? That’s something else, with a telling convergence of views between the state government, the Centre and the Congress leadership. No closet patriarchy, this. The core issue is not whether women want to worship at the temple. Not even about Sabarimala generally. It is specifically about the deh­umanising menstrual prohibition. Left to themselves, women believers may choose either way. There can be no rationalisation of the coercive proscription. The god does not need keepers of his celibacy, nor do women need menstruation monitors.

(The writer is professor and director, Council for Social Development, Hyderabad)