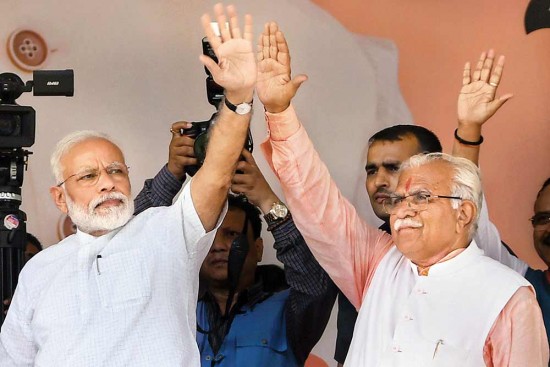 Polling dates for assembly elections in Maharashtra, Haryana and Jharkhand will be announced soon with some conjecture that Jharkhand may go for polls at a later date. In Jharkhand, considerations for left-wing extremist violence call for multi-stage elections. Altho­ugh­ coming soon after the Lok Sabha results, tilted singularly toward the BJP in each of these states, these elections call for a focus on specific state scenarios. Political pundits have long argued that the Indian electorate votes differently for state as compared to national elections; and that local issues matter more for the voter. The one sure conclusion in the run up to the elections is that state and national mandates may turn out to be the same directionally—i.e. advantage the BJP. Second, it may seem that political organisation and propaganda may matter more than issues. The one certain news is the continuing down-slide, lack of a poll plan, or indeed a strong poli­tical opposition from the Congress, and its alliance partners. Beyond few announcements for seat sharing, it is imperceptible what the Congress offensive is on the ground.

Maharashtra first—India’s third largest state has a large, 288-seat Vidhan Sabha. Congress dominance has been a story of the past, and either alliance of BJP-Shiv Sena or the Congress-NCP has been in power since 1995. The 2019 Lok Sabha elections were significant—the BJP firmed up its flagging alliance with the Shiv Sena, and fought as NDA. Assisted by the vote splitting capacity of Prakash Ambedkar’s Vanchit Bahujan Agadi (VBA), the NDA won 41 of the 48 Lok Sabha seats. Among the major setbacks to the Congress were the loss of Sushil Kumar Shinde and Ashok Chavan. For the NCP, the loss of Parth Pawar in Mawal signalled a decline in the local hold of Ajit Pawar, and the non-performing nature of the NCP-Peasants and Workers Party alliance. However, the NDA has not rested on its laurels—politics for them is what aca­demic Thomas Hansen calls a matter of “permanent performance”. The desertion of important leaders, especially from the NCP, continues. The defeat of farmer leader Raju Shetti, and BJP victories in Marathwada and Vidarbha signal that the party had done something to allay farmers’ grievances, which had cost the BJP the state elections of Chhattisgarh, Madhya Pradesh, and Rajasthan.