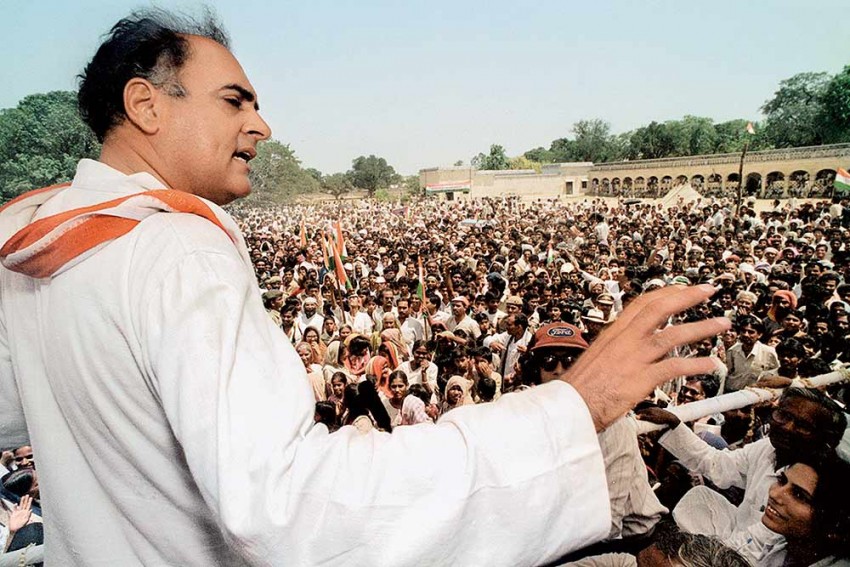 Rajiv Gandhi at a 1989 election rally in Faizabad. His unlocking the disputed site at Ayodhya in 1986 led to the shilanyas.
Puneet Nicholas Yadav November 14, 2019 00:00 IST Of Ideologies And Compromises: Post Ayodhya Verdict, Congress Romp With Shiv Sena Not Surprising 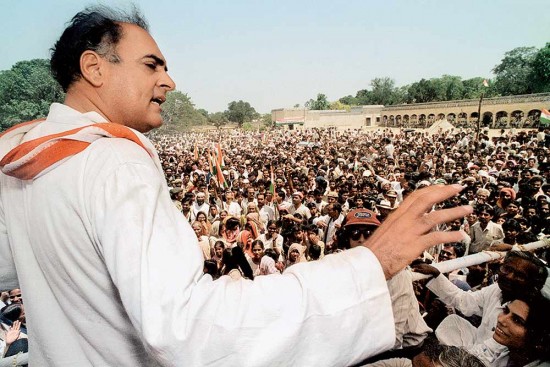 On November 9, soon after the Supreme Court decreed Lord Ram to be the legal title hol­der to his supposed Janmabhumi at Ayodhya, the Congress party rushed in to take some credit for resolution of the dispute. Two days later, the party top brass was seriously consi­dering extending support to a possible government in Maharashtra led by the Shiv Sena; a plan not readily acc­epted as party chief Sonia Gandhi believes that the electoral price for such an alliance will be steep.

The two events—even if the latter did not reach fruition—may be unrelated, but they signal a political duplicity from India’s electorally beleaguered Grand Old Party that often accuses its nemesis, the BJP, of the same affliction. The party’s unambiguous endorsement for construction of a Ram Mandir at the site of the demolished Babri Masjid and the fact that it was considering joining forces with a rabidly right-wing Shiv Sena demonstrates a readiness for political and ideological compromises if they can assure concrete benefits.

This adoption of realpolitik has long been in the making, hastened now in the teeth of its existential crisis brought upon by electoral setbacks. The trajectory of the Ayodhya civil suit, which first reached courts in 1885—incidentally, the same year the Congress was founded—is also instructive of the crests and troughs that the party has navigated.

In post-Independence India, the first flashpoint in the Ayodhya dispute came on the night of December 22-23, 1949, when Hindu radicals surreptitiously placed Lord Ram’s idol under the central dome of the Babri Masjid. There is sufficient documentary record to suggest that prime minister Jawaharlal Nehru was “dismayed and depressed” by that act. Between January and May 1950, he exchanged several telegrams and letters with party stalwart G.B. Pant, then CM of the United Provinces, whose ideological affinity with the Hindu right is well known, imploring him to set things right in Ayodhya.

Nehru’s telegram to Pant days after the December 23 event and another one sent on April 17 are instructive. In the first, Nehru told Pant that he was “disturbed at the developments in Ayodhya” and urged him to “undo the wrong” as it set “a dangerous example… which will have bad consequences”. Pant did not do as asked but conferred with then Union home minister Vallabhbhai Patel. Patel, in turn, told Pant to maintain status quo at Ayodhya and cautioned against “any unilateral action based on an attitude of aggression or coercion”. Nehru’s April 17 telegram shows his growing frustration over Pant’s inaction and possibly on his own isolation within the party on the Ayodhya dispute. “Atmosphere in UP has been changing for the worse from the communal point of view…. Indeed, UP is becoming a foreign land to me. I do not fit there. The UP Congress, with which I have been associated for 35 years, now functions in a manner that amazes me,” Nehru wrote.

By late 1950, the Ayodhya dispute had once again reached the Faizabad civil court. The subsequent three decades—including the turbulent period of the Emergency under Indira Gandhi—saw little political or social lobbying on the Ram Janmabhumi movement. The civil suits in the court too dragged on, hardly drawing anyone’s interest. 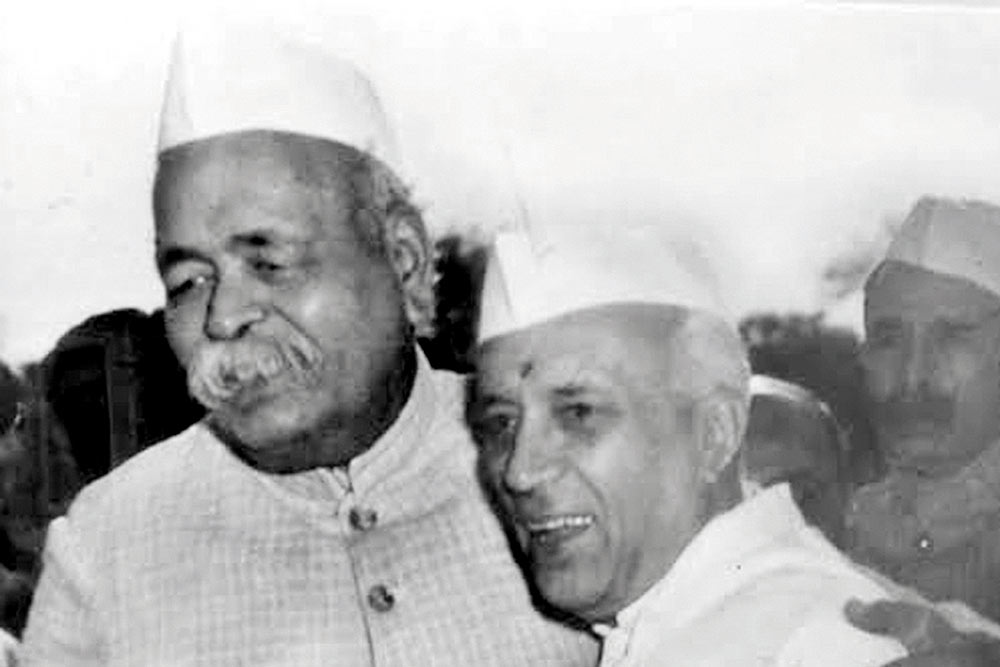 G.B. Pant with Pandit Nehru. The United Provinces CM ignored the PM’s call to “undo the wrong” of 1949.

The late ’60s, however, saw political turmoil of a different kind as the Congress’s nationwide hegemony was increasing challenged; it also underwent a split, with Indira loyalists leading one faction and the famous ‘Syndicate’ another. A tumultuous turn of events was unfolding in Maharashtra, too, where the Congress’s key opposition came from Left parties, some regional outfits and vibrant trade union movements. When Bal Thackeray founded the Shiv Sena in June 1966, the Congress dismissed his potential to cause political damage. However, things changed fast over the subsequent decade. Thackeray, his Shiv Sena and its trade union wing were nurtured by the Congress, particularly its chief minister Vasantrao Naik, in those early years. The Congress felt that Thackeray was a valuable, covert ally to undermine the Left and its trade union movement, not realising that the Sena would, in years to come, emerge as a formidable opposition party itself.

By the 1980s, the Congress was again dominating the country’s political landscape, with the Janata experiment having imploded under the burden of its own contradictions. The assassination of Indira Gandhi in 1984 helped the party win an unprecedented majority in the Lok Sabha polls. Rajiv Gandhi’s abject surrender to hardline Muslim clerics following the Supreme Court’s landmark Shah Bano verdict and his government’s decision to reverse it gave leaders of the fledgling Hindu right an opportunity to revive the long-dormant Ayodhya dispute.

In 1986, in an attempt to neutralise the charge of Muslim appeasement, Rajiv gave in to demands from the BJP/RSS combine and other Hindu outfits to open the locks to the disputed site in Ayodhya and allow the Vishwa Hindu Parishad (VHP) to perform shilanyas for the Ram Mandir. Events of 1986 and 1987, as recounted by former Union home secretary Mad­­hav Godbole in his book, The Babri Masjid-Ram Mandir Dilemma—An Acid Test for India’s Constitution, dis­­play a lack of will and initiative on Rajiv’s part to prevent events that ultimately led to the demolition of the Babri Masjid.

Godbole reproduces letters written to Rajiv by leaders from across the political spectrum, each offering a seemingly workable settlement formula. Godbole recounts that even in May 1989—six months before the shilanyas was per­­formed—Atal Bihari Vajpayee informed then Union home minister Buta Singh that the site should be handed over to Hindus, who as a goo­­­d­will gesture, “should maintain the Babri Masjid as it is without there being any worship by either community” and that a “temple and a mosque should be built near the disputed shrine”. The former bureaucrat writes, “I would unhesitatingly call Rajiv Gandhi the second most prominent kar sevak, after (K.K.K.) Nayar, the district magistrate of Faizabad, who encouraged the clan­destine placement of the Ram Lalla idol in Babri Masjid on 22 December, 1949.”

It was the Rajiv administration’s nod for opening the locks to the disputed site that acted as a catalyst for the Sangh Parivar’s Ram Janmabhumi movement. Rajiv’s complicity in the Ayodhya dispute paved the way for L.K. Advani’s controversial rath yatra in 1990, which generated mass hysteria among Hindu radicals, who eventually demolished the mosque, with another Congress-led Centre under P.V. Narasimha Rao passively looking on. A day before the demolition, Vajpayee, who until May 1989 advocated settlement, told kar sevaks on their way to Ayodhya at a Lucknow rally: “Zameen samtal karni padegi” (this land will have to be leveled).

Rajiv’s complicity in the shilanyas and Rao’s inaction during the build-­up to the demolition swiftly eroded the Congress’s central place in India’s polity. The Rao government’s damage control exercise by enacting the Ayo­dhya Act, 1993, which made the Centre custodian of the disputed land pending the title suits, failed to pacify anyone.

The Congress’s shrinking electoral footprint in the Modi-Amit Shah era has forced it, or at least a sec­tion of its leaders, to project the ‘sec­­ular’ outfit as being willing to flaunt its concern for Hindus, while keeping silent on the lynchings of Muslims and Dalits. Rahul Gandhi, during his 18-month stint as party president, made it a habit to visit Hindu temples during poll campaigns.

When Rahul’s mother, Sonia Gandhi, returned as the party’s interim chief after the Lok Sabha debacle, she sought to correct this ideological elasticity by urging colleagues to uphold the party’s pluralistic values. Her advice, however, seems to have few takers.

After the SC declared its Ayodhya verdict, Sonia presided over a meeting of the Congress Working Committee and pushed for a “measured response” to the judgment, says a senior party leader. However, a section of the party believed that the judgment gave the Congress a chance to win back trust of Hindu voters. Congress media cell chief Randeep Surjewala’s comment that the party was all for construction of a Ram Mandir and that “after 26 years, the SC has done exactly the same thing that the Congress party had sought to do through an Act of Parliament (the Ayodhya Act, 1993), vis-a-vis construction of the Ram temple, a mosque and a museum”, shows his party’s willingness to continue peddling its soft-Hindutva.

While the Congress may have not actually joined ranks with Shiv Sena, it is willing to loan the services of senior leader Kapil Sibal to the Thackerays in their Supreme Court battle against the President’s rule in Maharashtra. The Congress’s rea­­ction to the Ayodhya verdict and its dalliance with the Sena—not officially acknowledged because of Sonia’s dithering, despite pressure from newly elected MLAs and ally Sharad Pawar—mustn’t surprise anyone. It is only an addition to the GOP’s long list of ideological and political compromises.