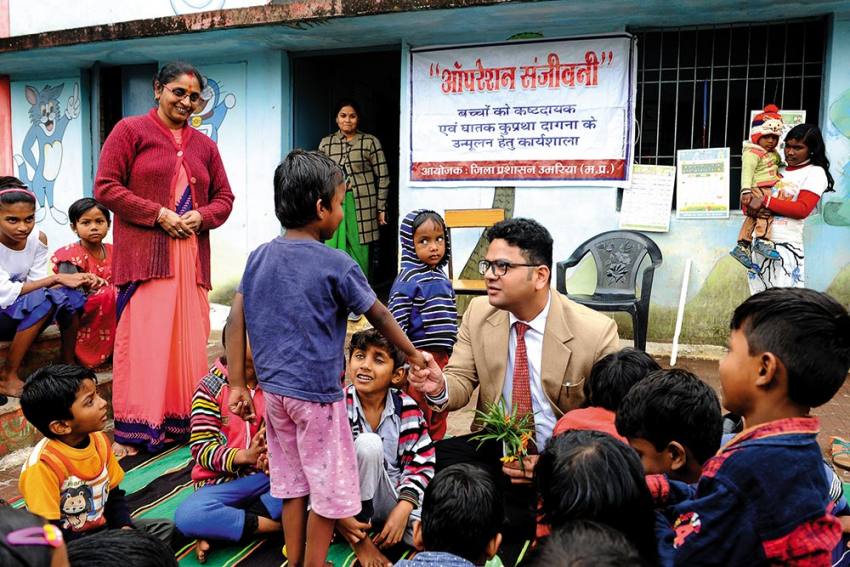 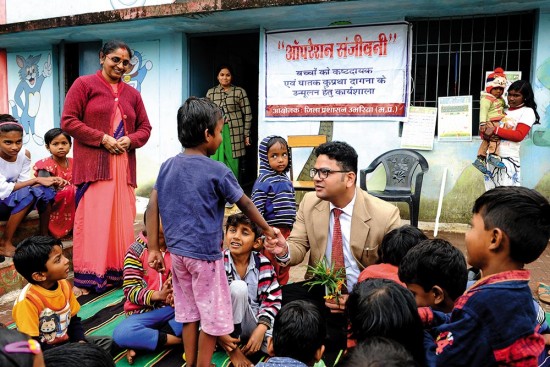 Umaria, Madhya Pradesh, goes to sleep at 7 pm. Or the roads give that impression—quiet and enchantingly deserted. The young (it was carved out of Shahdol in 1998) and small district is also home to Bandhavgarh National Park.

Umaria also has a prevalent malpractice, called daagna, which has its roots in superstition. Under this, village elders or local healers singe a sick child’s belly with hot iron, a piece of bangle, neem wood, or even the sharp end of a sickle. “Children are usually branded when they suffer from pneumonia, when the respiration rate goes up and chest in-drawing happens. Village folks believe it will bring relief, but that’s superstition. Plus, there’s a risk of the wound getting infected,” says Chandra Pal Shakya, a paediatrician at Umaria’s district hospital.

Learning of this when he took over as district collector in March 2019, Swarochish Somavanshi decided to gauge its extent. He told officials to rec­ord instances of daagna along with other indicators like weight, height etc in the biannual survey conducted under Dastak Abhiyaan.

The results showed that 562 kids were found to have been singed through daagna in Umaria. Somavanshi decided to combat it. “People would say, Collector sahab to chhoti si cheez ke peechhe pad gaye hain (The collector is making a big deal of it),” he says, showing photos of children with burnt bellies, even necks, on his phone. In one, the entire chest and belly of an inf­ant is covered with burn marks, as if a hundred cigarettes were stubbed on the little torso. “I dec­ided this is the biggest issue that my district faces,” he adds. 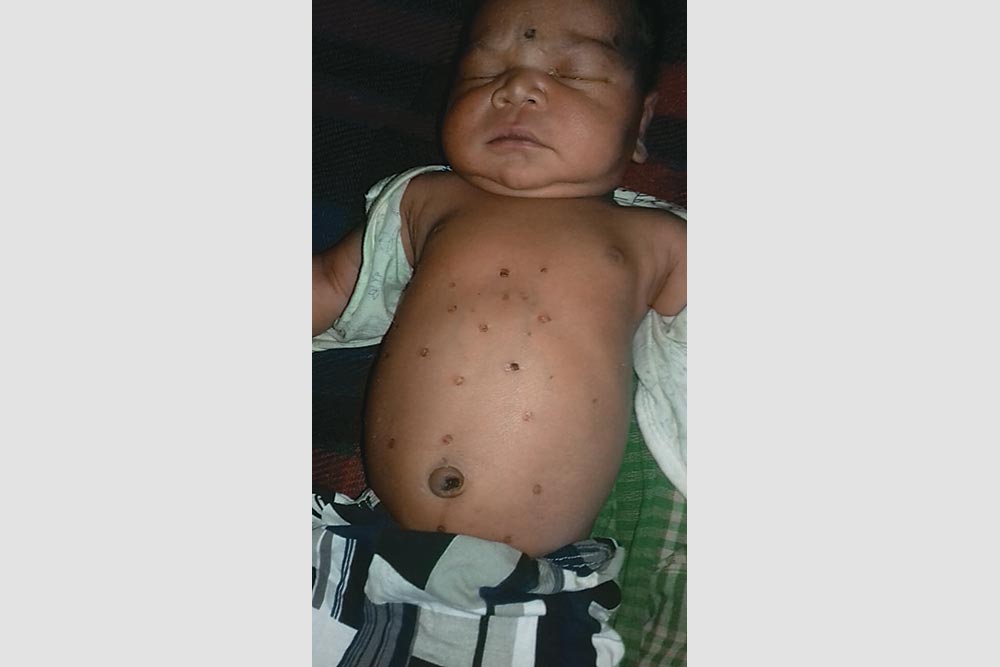 A victim of daagna, his distended belly punctured with burn marks.

The children are usually subjected to this cruel ‘cure’ when they are ill with pneumonia, or cold, or are suffering from malnourishment, says Shanti Bele, the district programme officer for women and child development. “The practice has a direct connection to nutrition—poor nutrition leads to kwashiorkor, which res­ults in a protruding belly, and marasmus, which causes stomach shrinkage, thereby increasing the chances of their being subjected to daagna. There have been cases where hot iron was put on genitals.”

What happens when a child is singed? Somava­nshi says, is she is deprived of medical care as guardians believe that burning will heal them, and a serious wound is inflicted on her that can be fatal. To curb daagna, he launched ‘operation sanjeevani’, with a three-pronged approach.

The first is deterrence. The collector has issued orders, warning people against it. FIRs have been registered against 11 offenders in the district.

The second part is monitoring. On Tuesdays, children under five are checked against health par­ameters by workers at anganwadis. In Umaria, children are also checked for possible daagna marks. The sarpanch, the panchayat secretary, and the anganwadi worker all sign a register after monitoring. The crucial leg of the programme is public awareness. “I feel that law or administration alone can’t fight social evil. We face a lot of res­istance if we try to interfere in people’s customs. That’s why we have started reaching out to social and religious leaders,” says Somavanshi. Awareness camps also advise people against it.

A native of UP’s Rae Bareli and son of a decorated police officer, Somavanshi tells his officials, “We are the advocates of those who can’t afford to have an advocate on their own.” Before joining the IAS in 2011, he often switched jobs because they got monotonous. “But the challenges, immense responsibilities and sheer satisfaction in this job keep you glued to it. For instance, if you want to distribute blankets to the needy, you have a whole stock at your disposal. You just have to figure out ways to distribute them,” he says.

A poet himself, he talks fondly about Kabir, Sahir Ludhianvi, and Gulzar. His love for the Constitution surpasses his love for poetry. If there is one thing he wishes to change, it’s to bring child health and education into the mainstream debate. “It will sensitise the government and bureaucracy to the cause, eventually leading to greater budget allocation and more effective policy,” he says.

By Salik Ahmad in Umaria