Home  »  Magazine  »  National  » Valley Smoke »  Not A Place To Breathe: How Tear Gas Poses A Public Health Risk In Kashmir

Not A Place To Breathe: How Tear Gas Poses A Public Health Risk In Kashmir

As with all “non-lethal, or less- lethal weapons”, the doctors say there is some risk of serious permanent injury or death when tear gas is used. 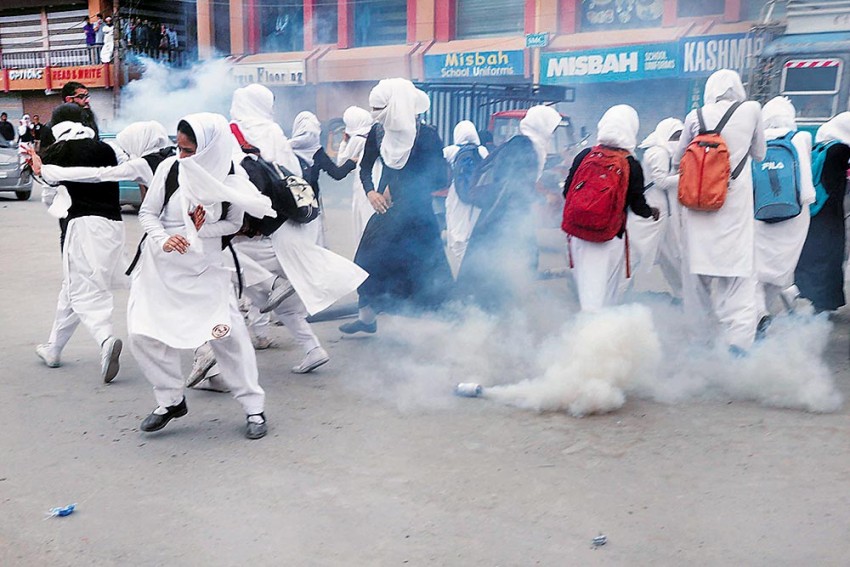 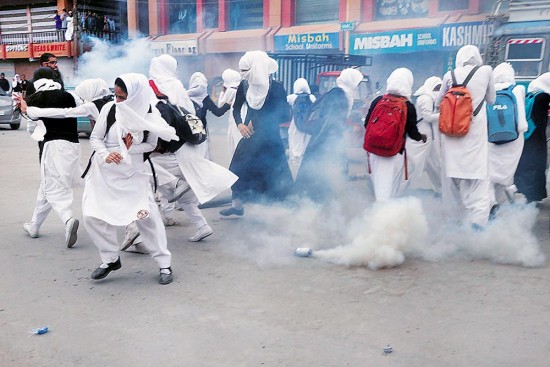 Yawar Ahmad Bhat, a 22-year-old of Srinagar’s Maisuma loc­ality, cannot lift his right hand and right leg, and needs help to use the bathroom. And he cannot remember his life before June 30, 2009. That evening a tear-gas shell fired from close quarters hit him in the head. He fell down with blood gushing from the wound and was taken to SKIMS hospital in ­Soura. Two surgeries later, he was discharged on August 1. The depar­tment of neurosurgery had diagnosed his condition as “traumatic SDH with contusion in left parietal region” with 75 per cent disability.

A narrow lane in the interiors of Maisuma leads to the two-room house of Yawar’s father Abdul Rahim Bhat, a motor mechanic. Doctors have said Yawar needs another head surgery. “I don’t know what to do. I can no longer afford his medical expenses,” says Abdul. Yawar, sitting with his two ­sisters and parents in the kitchen, which also serves as the guest room, is trying to say something but cannot. His sisters try to teach him English alphabet these days, but he forgets quickly. Before the tear-gas shell wiped out his memories, he was a student in a local public school. His parents say he was good at both studies and sports. On that fateful June evening, the Class 8 student went out to buy milk from a shop on the main road, and was hit by the shell when he was walking on the lane leading to it. The police had fired the shell while chasing a few youth there.

Police records say Yawar was not inv­olved in any protest or stone-throwing. Since 2009, Maisuma has witnessed hundreds of tear-gas shells being fired in the area. “We have got used to it,” says Abdul. But an elderly woman says the new shells used by both the J&K Police and the paramilitary Central Reserve Police Force give her the feeling that the very air is being poisoned. “The smoke suffocates us. It chokes us. It enters all our rooms. You don’t find a place to breathe,” she says. 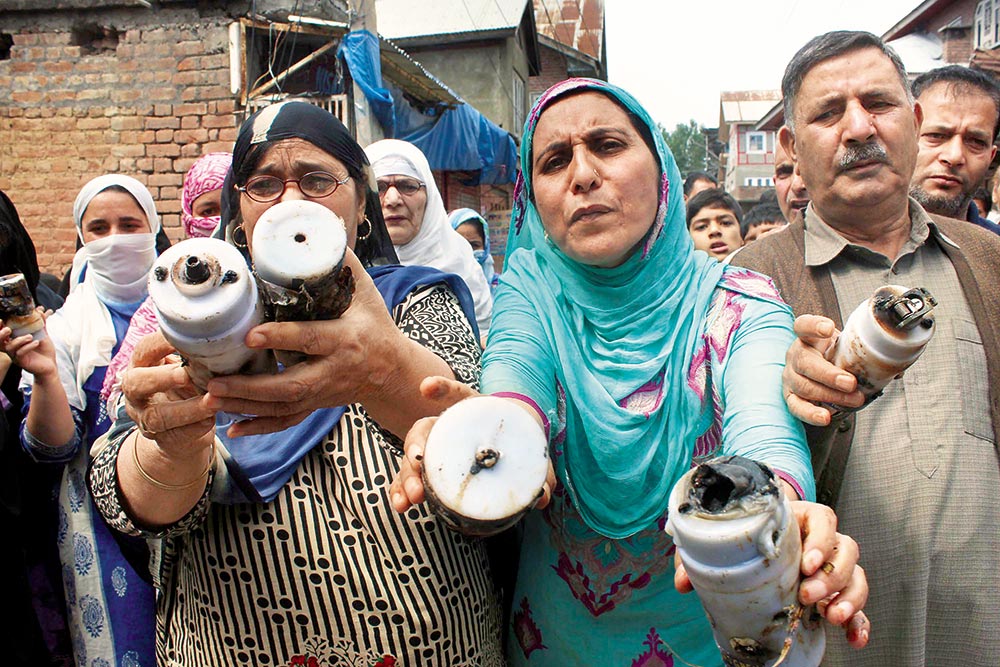 While stone-throwing protesters use wet gunny bags to cover the shell or throw it back at the police during protests, tear smoke has become health issue across the Valley. It spreads across neighbourhoods, leaving residents with no option but to keep their doors and windows closed. “Approximately one lakh-plus tear-gas shells were used in 2016 and since then around 70,000 have been used on an average every year. We must be the biggest users of the munitions in the country,” says a senior police officer. In 2018, according to sources, around 36,000 tear-gas shells were used against protesters, besides 20,000 chilli grena­des and an almost equal number of PAVA shells. Stun grenades and colour-­smoke grenades were also used.

Though the government has introduced multi-barrel launchers fixed atop arm­oured vehicles that can fire 12 shells at a time, officials say police and paramilitary personnel fire most tear-gas shells using hand-held gas guns. The forces must aim below the chest and fire the shells in a parabolic way—that’s the guideline. Armoured vehicles with multi-barrel launchers are also seen in Srinagar and elsewhere in the Valley during protests, but police sources say using multi-barrel launchers in congested urban areas could be dangerous as failing to maintain the shell’s trajectory might set off fires leading to large-scale destruction.

“The tear-gas shell is a lethal weapon,” says lawyer Ejaz Ahmad Bhat, advocate in the case of Wamiq Farooq, a 13-year-old killed on January 31, 2010, when a shell landed on his head, leading to agitations across the Valley. “It was gruesome. Parts of his brain were found spattered on the ground where he had been playing when he was killed. The portions were collected by the people around.”

Inspector general of police (Kashmir range) Swayam Prakash Pani says there has been a drastic reduction in the use of crowd-control munition compared to 2016 as the law and order situation has improved. The maximum use is in Srinagar, followed by the urban areas in the southern districts, besides Sopore and Baramulla towns in north Kashmir. Most tear-gas shells are procured from the BSF’s Tear Smoke Unit in Tekanpur, Madhya Pradesh, a major manufacturing centre of the munition. Jammu and Kashmir gets the most shells from there, with almost all its police stations keeping stocks. The quantity to be allo­tted to each police station is decided ­according to the area’s history of civil unrest and the current law and order situation. Sources say all police stations in Srinagar’s old city and urban centres elsewhere in the state are alw­ays kept well-stocked.

Ejaz insists that the alternatives to tear gas being used in Kashmir are not non-lethal weapons. While police sources admit that the smoke from chilli grenades and PAVA spreads across a wide area and causes suffocation, they say they have to “fire something to protect law and order, and at least the smoke doesn’t kill”. But Ejaz points out that “people have also died of suffo­cation due to smoke”. A police officer rec­alls seeing a child faint in its mother’s lap when a tear-gas shell burst near them. “The woman was just walking by. We rushed to get her and the child out of the area as I felt the child shouldn’t die,” says an official.

Conceding there are potential health issues, officials say the gas is tested and certified before being put to use. “And use is based on a presumption that there is a stand-off distance between the mob and the forces. Once that gap is breached, it is all chaos and panic. It’s then that we have bad incidents,” says an official.

Doctors at Srinagar’s SMHS hospital, who frequently witness tear- gassing in the neighbourhood and also on their premises, say that the most commonly used gas contains the chemical agent 2-chlorobenzalmalononitrile. As with all “non-lethal, or less- lethal weapons”, the doctors say there is some risk of serious permanent injury or death when tear gas is used. “This inc­ludes risks from being hit by tear-gas shells such as severe bruising, loss of eyesight, skull fracture and even death,” says a senior doctor, who explains that tear gas works by irritating the muc­ous membranes of the eyes, nose, mouth and lungs. Typically, the effects kick in after around 30 seconds, and inc­lude a burning sensation in the eyes, throat and nose, increased tears and nasal secretions, sneezing and coughing, difficulty in breathing and pain in the chest, excessive saliva and skin irritation. Those who face heavy exposure can also suffer from vomiting and diarrhoea. These effects start to wear off within 15 minutes if exposure stops.

“I have seen patients who had bronchial asthma and were at home when tear gas precipitated their respiratory problem,” says a doctor. “They had to report to the hospital. In 2013, I remember an elderly woman from downtown Srinagar complained of severe chest tightness after tear-gas shells exploded in the garden near her house. She was later brought dead to the hospital.”

Doctors are most worried about the use of tear-gas inside and around hospitals. “It creates a terrifying scene, with the whole hospital, doctors, staff, att­endants and patients coughing continuously, causing great discomfort to the hapless souls already struggling with some sort of bodily pain and disease. Not only does it lead to respiratory distress, but also spreading of infection inside the hospital,” says a doctor.