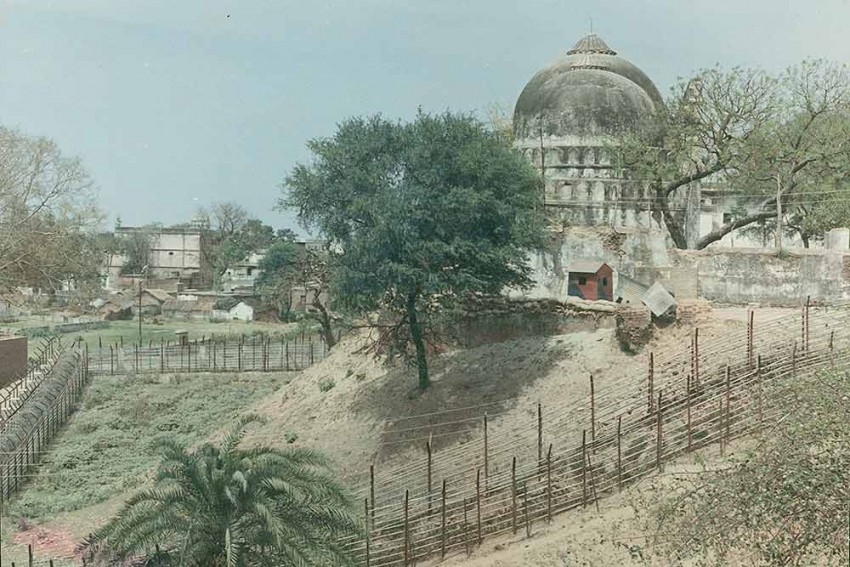 The Supreme Court judgment on the Babri Masjid land dispute, it seems, is being imposed on Muslim communities. The pro-verdict lobby, the neo-nationalists, wants Mus­lims to remain calm, accept the judgment unequivocally, even celebrate it in the name of communal harmony and national interest. The anti-verdict commentators—the declared liberals—describe it as a triumph of Hindutva. Evoking secularism and minority rights, liberals tend to reproduce the narrative of Muslim victimhood and betrayal. It appears that they want Muslims to react in the name of secularism!

These two conflicting readings rely heavily on a strong assumption that Babri Masjid has always been a Muslim issue and the construction of the Ram temple on the disputed site would eventually have an impact on the participation of Muslims in public life. This Muslim-Babri Masjid correlation is factually and historically wrong.

The Babri Masjid dispute was a localised one from 1949 to 1986. Leading Hindu or Muslim pressure groups, such as Hindu Mahasabha, RSS, Muslim Majlis-e-Mushawarat, Jam­aat-e-Islami and the Jamiat Ulema-e-Hind did not find any political potential in it during this time. It became a Muslim issue only in 1986, when the mosque was opened for unrestricted puja. The VHP-led Ram Tem­ple agitation evo­ked the issue as a symbol of historical conflict between Hindus and Muslims. That was the reason why the Sangh Pari­var cal­led upon Muslim society to pave the way for the temple’s construction, as if the dispute was to be solved only by the Muslims as a homogeneous collectivity!

The Muslim elite did not rely on the religious status of Babri Masjid. Nor did they insist that it should be given back to Muslims for regular namaaz. Instead, two broad legal demands were made: Parliament must enact a law to protect the status of the religious places of worship and the title suit must be transferred to a special bench of the high court.

The loss of babri masjid was never a political rallying cry for muslims. it was a legal issue.

These demands were accepted even before the demolition. The Protection of the Religious Places of Worship Act was passed in 1991; the legal process to settle the title suit was also expedited. That was why Muslim parties decided to treat the Babri Masjid case as a legal case and recognised the AIMPLB’s high power committee as the core body to look after the proceedings. The Babri Masjid Action Committee passed a resolution on December 1, 1993 to suspend all agitational programmes.

Common Muslims, who were mobilised in the name of protecting the mosque, were always told that Babri Masjid was a political defeat for them. Even the legal achievements—the 1991 Act and the High Court verdict of 2010 that recognises the stake of the Sunni Waqf Board—were never celebrated by the Muslim elite simply to keep the issue alive.

Muslim worshippers were never allowed to offer prayers inside Babri Masjid since 1949. This legal restriction discouraged them to assert any religious claim on it. The masjid was like any other mos­­que and did not have any special religious status. Although its demolition did affect Mus­lim sensibilities, it didn’t become a political ref­­­­erence point for asserting collective presence.

The CSDS-Lokniti surveys map out this com­p­lex Muslim reaction after 1992. For instance, in 2009, around 44 per cent Muslims claimed that only a mosque should be built on that dis­puted land, while 25 per cent suggested the con­­struction of a Ram temple and the Babri Masjid side by side. This was not the case in 2016, when a majority of Muslims, especially in UP, argued that the Babri Masjid issue was not important for them. It means that although the demolition has always been seen as a highly unjust act, Muslims did not have any serious interest in the outcome of the title suit.

It does not, however, mean that the issue is settled for Muslims. One of the most serious drawbacks of the recent verdict is that it aims to solve the title suit primarily as a Hindu-Muslim conflict. It offers a politically problematic conceptualisation of religious communities. Hindus are treated as a homogeneous faith community, who claim the site as “the birthplace of Lord Ram”; while Muslims are envisaged as a historical community that “claims it as the site of the historic Babri Masjid built by the first Mughal emperor, Babur.”

This legal portrayal of Hindus and Muslims as hostile entities is open to multiple political interpretations. Therefore, the possibility of a politically vibrant afterlife of the Ayodhya dispute cannot be ruled out.