Maharashtra Powerplay! Why You Just Can't Keep Ajit Pawar Away From Political Spotlight

Ajit Pawar was sworn in as Maharashtra Deputy Chief Minister twice in a short span. He now leads the bunch of NCP MLAs who bagged the lion's share of major ministries like home and finance 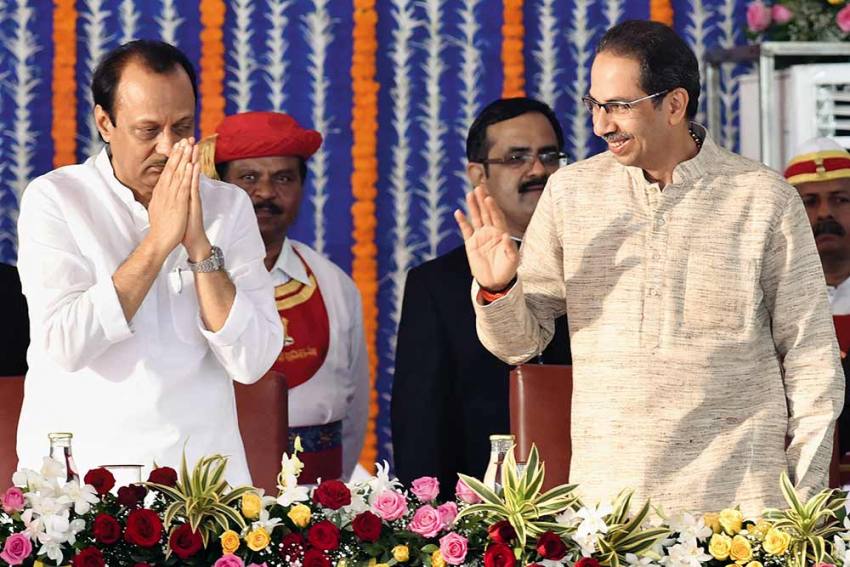 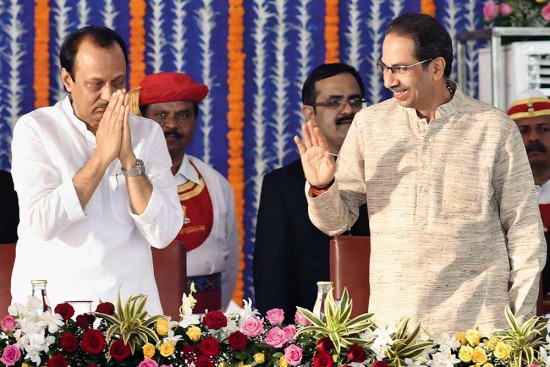 Any politician would envy Ajit Pawar’s luck. In a little over a month, the 60-year-old NCP leader was sworn in twice as deputy CM of Maharashtra—first, as a BJP ally in the Devendra Fadnavis government that lasted barely three days in November, and now as second-in-command in an anti-BJP Maharashtra Vikas Aghadi (MVA) ministry led by Uddhav ­Thackeray of the Shiv Sena.

If anybody sought to write a political obituary of the seven-time MLA from Baramati who defied his uncle and party president Sharad Pawar not long ago, staging a midnight coup to form the BJP-NCP government during the days of ­uncertainty after the October 21 assembly elections, it was premature. He was sworn in again as deputy CM on December 30 in the MVA government, with Sharad Pawar’s apparent blessings.

It was, however, no surprise to see Ajit taking oath as the deputy CM—fourth time in his career—when CM Uddhav ­finally expanded his ministry on December 30 after procrastinating for more than a month since taking the reins of the state government. On November 28, Uddhav had taken oath as CM with six cabinet ministers in tow, two each from the coalition’s three main constituents—Shiv Sena, the NCP and the Congress—but Ajit was not among them at the time. Nonetheless, it was an open secret in political circles that he would sooner or later be deputy CM once again.

Ajit, who has also been given the key portfolio of finance, leads the bunch of NCP legislators who bagged the lion’s share of major ministries, including home for senior leader Anil Deshmukh. Interestingly, the Shiv Sena initially wanted the home ministry, but ended up giving it to the NCP after prolonged ­negotiations among the three allies.

Ajit Pawar leads the bunch of NCP MLAs who bagged the lion’s share of major ­ministries like home and finance.

Consequently, a section of Shiv Sena and Congress leaders were sore over what they felt was the NCP’s domination in the ministry as far as key portfolios are concerned. Though former CM Ashok Chavan of the Congress was given the public works department and the state party chief Balasaheb Thorat the ­revenue ministry, many state party leaders felt they had been given a raw deal. An upset Sena minister of state Abdul Sattar reportedly went to the extent of tendering his resignation over denial of a cabinet berth before he was pacified by Uddhav, while supporters of Congress MLA Sangram Thopte allegedly resorted to vandalism at the party office in Pune for his exclusion from the ministry.

“There is a limit to how many persons can be accommodated in the council of ministers,” said Uddhav. “This is a ­three-party government.” Political ­observers, as also state BJP leaders, think that the inordinate delay in expansion of the ministry pointed to acute ­internal differences and contradictions within the coalition, which would ­ultimately lead to its downfall.

The Shiv Sena, however, is optimistic that Uddhav would complete his five-year term despite ideological differences with its allies because they had all come together to work for the welfare of Maharashtra and its people. Still, much of it hinges on how he deals with his ­allies in the months ahead. When Sharad Pawar was recently asked in Nagpur about the comparison Uddhav had made earlier between the Delhi Police action against students of Jamia Millia Islamia protesting against the Citizenship (Amendment) Act and the Jallianwala Bagh massacre, he quipped, “If he has said so, then we are on the right track. It means our government will last long.”

The 80-year-old NCP patriarch, considered to be the real architect of the MVA government, may have said it in jest, but he may well have given a clue to Uddhav on how to run the coalition government smoothly in Maharashtra.