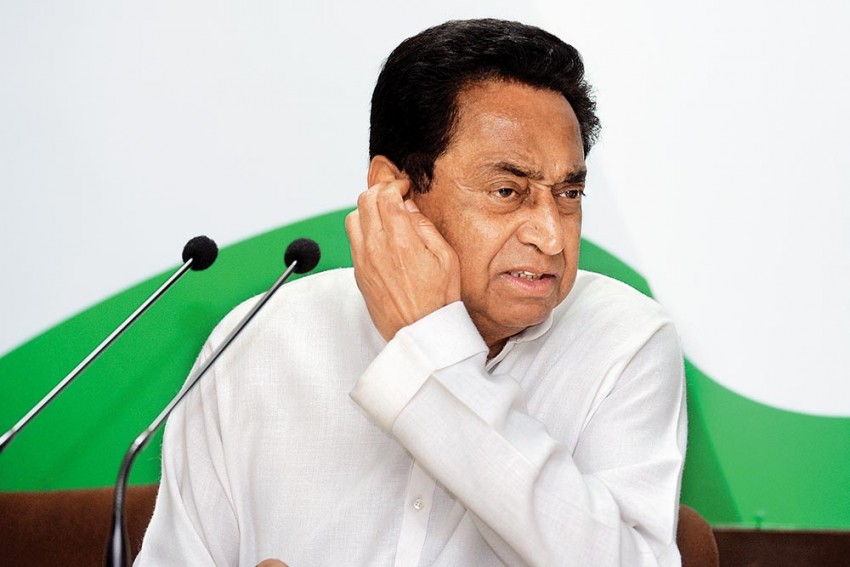 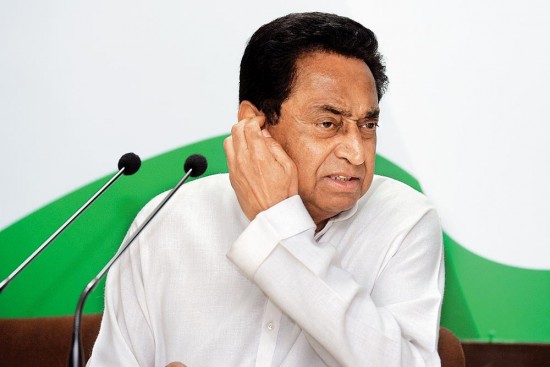 Two days after the Lok Sabha election results were declared on May 23, Madhya Pradesh chief minister Kamal Nath skipped a crucial Congress Working Committee (CWC) meeting held in Delhi. He preferred brainstorming on the strategy to protect his six-month-old state government from collapsing. Veteran Congress leader Digvijaya Singh also stayed put in Bhopal to keep an eye on party MLAs at the CM’s request. Kamal Nath held long closed-door discussions with him and other senior leaders, besides convening a meeting of legislators and ministers.

The Congress, which had fallen two short of the simple-majority mark of 116 in the November 2018 assembly polls, managed to cobble up a majority by enlisting the support of one Samajwadi Party, two BSP and four independent MLAs—all of whom att­ended the recent meeting where Kamal Nath offered to step down as CM. The MLAs turned down the offer, declaring that the government would last its full term, and that they are ready to prove majority support in the Vidhan Sabha. But Kamal Nath knows pretty well that his government is vulnerable to poaching by the BJP and blackmail by BSP supremo Mayawati and SP chief Akhilesh Yadav.

Meanwhile, with BJP MLA G.S. Damor elected to the Lok Sabha from the Ratlam-Jhabua constituency, the opposition BJP is now left with 108 MLAs. The numbers favour the Congress government, with 121 MLAs on its side, but the party  still has much to worry about, having polled more votes in the Lok Sabha polls than the BJP in just 19 of the 230 assembly segments. In other words, if this were an assembly election, the BJP could well have romped home with 211 MLAs. The BJP garnered 58 per cent votes, leaving the Congress far behind with just 34 per cent. If Kamal Nath were serious about his warning to ministers in the run-up to the general elections that they would be sacked if the Congress didn’t win in their constituencies, as many as 22 ministers would lose their job. 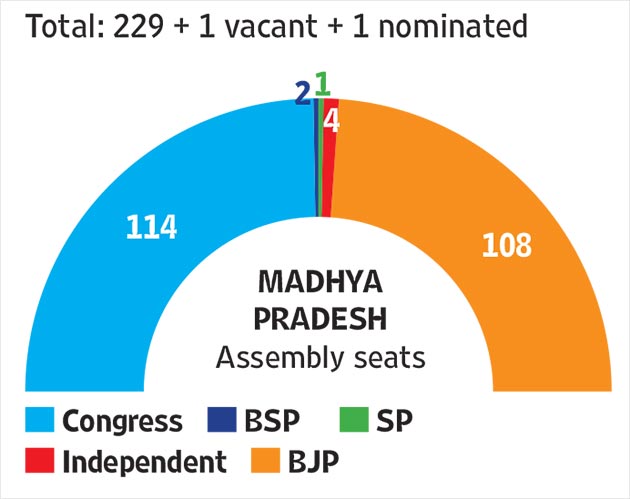 “This government would fall even if the BJP’s national leadership sneezes,” BJP national general secretary Kailash Vijayvargiya had said not long after the Congress formed the government last year. While the Congress leadership feels there is a slim chance of the Narendra Modi government invoking Article 356 of the Constitution to dismiss the state government, they apprehend that the saffron party may lure away the independents. And, while ­national leaders of the SP and the BSP are unlikely to support the formation of a BJP government in Madhya Prades, their MLAs in the state may be tempted to jump on to the saffron bandwagon with promises of ministerial berths or other spoils­—now that the two regional parties have ended up with a much lower tally than expected in home turf Uttar Pradesh.

BSP MLA Rambai Singh, however, has said the ­government would last its full term, and that she would conti­nue supporting it whether or not she gets a min­isterial position.

Former CM Shivraj Singh Chouhan of the BJP has said his party would not engineer the fall of the government, but would not mind if it collapses under its own weight. “The infighting within the Congress would be enough to bring it down,” says Gopal Bhargava, leader of the Opp­o­sition in the Vidhan Sabha. A senior BJP leader tells Outlook that his party would wait for the government to fall and then opt for fresh elections. Another says the government should resign as “people have rejected even their heavyweight leaders”. “The government’s failure to waive farm loans is a big reason for people’s anger,” he adds, requesting not to be named.

The Congress, on its part, may try to retain the loyalty of the independents by offering ministerial berths or positions in state-run boards and corporations—one is already a minister and more may be accommodated soon. The BSP and SP MLAs had been denied ministerial ­assignments on the ground that they had extended unconditional support, but they may be inducted in the changed circumstances.

Kamal Nath has other worries too, with his nephew Ratul Puri’s name surfacing in connection with the ­controversial AgustaWestland helico­pter deal. The CM has warned his MLAs to be wary of fake messages and videos on social media.

By Shaini K.S. in Bhopal