Lives, Businesses In Jeopardy As Amaravati Looks Into An Uncertain Future

From poor farmers to construction giants, the limbo over Amaravati as a dream city in the Jagan Reddy regime has messed up lives and livelihood 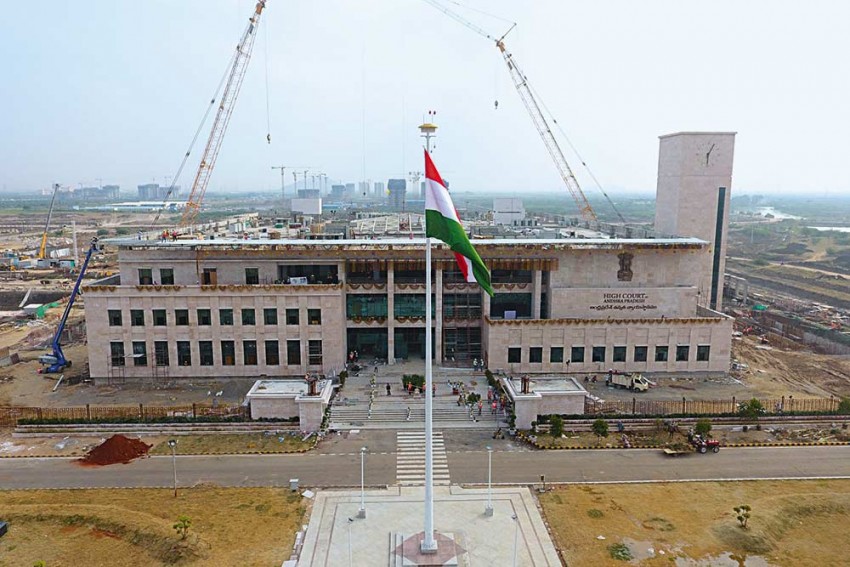 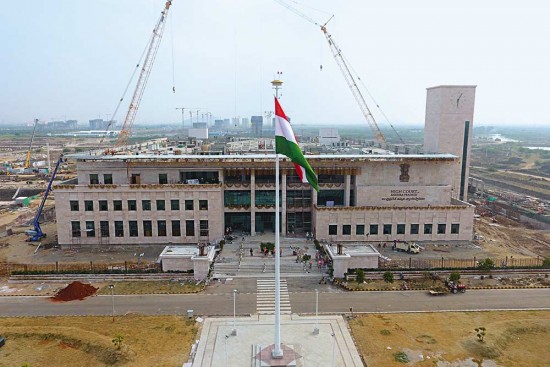 It is tough to miss the worry lines on the faces of S.N. Subrahmanyan, MD and CEO of L&T, Venkateswara, a farmer from Thullur village near Vijayawada, and a group of const­ruction workers from West Bengal. The balance sheet of the construction major, the promised housing plot of the farmer and the livelihood of the migrant workers hang in balance as the Amaravati capital project of And­hra Pradesh has gone into a limbo.

Already slowed down by political ­hostility between its original promoter, former CM Chandrababu Naidu, and his successor Jaganmohan Reddy, Amara­vati’s completion in the near future looked bleaker after the World Bank and the Asian Infrastructure Investment Bank pulled out their loan components totalling $500 million.

Unsurprisingly, Naidu was quick to blame his political rival. “The World Bank said they will come for detailed personal inspection because of ­complaints from Jagan’s part,” Naidu told the Andhra Pradesh assembly. “When the Centre asked for the state government’s response by July 15 about the nature of complaints, it said the process was still on. The government of India assumed there was no interest on the part of the state government and cancelled the World Bank loan.”

The former CM apprehended that his pet project was being sabotaged by his rival as Jagan ordered a review of all projects of the previous government and stopped payments to the contractors. The TDP chief’s fears were not unfo­unded as the government allocated just Rs 500 crore for Amaravati in this year’s budget for the capital city that has alr­eady seen a spend of Rs 45,000 crore out of its overall cost of Rs 1.09 lakh crore. The delay and misgivings have troubled all the stakeholders. L&T, which is a major contractor constructing residential blocks for government officials, roads, storm water drains, utility ducts and a road bridge across the Krishna river in Amaravati fears that the delays can tell on its finances. “About three per cent of our Rs 3 lakh crore order book is in Andhra Pradesh. So any delays could affect the progress of all our projects in the state. And we have not seen this ­scenario where one government goes and the new government reviews every­thing the previous government did,” Subrah­manyan complained at a press meet in Mumbai recently.

Similarly placed are two other major construction players—Shapoorji Pallonji and Nagarjuna Construction Company—contractors of the rest of the construction pie in Amaravati. The del­ays in clearing the bills since March, when the model code of conduct kicked in ahead of the general elections, is hurting them as well. “Since we have borrowed from banks to finance these orders, they too will be impacted by such inordinate delays. In the long run, such dithering will downgrade Andhra Pradesh as an investment destination,” cautioned a senior manager of Nagarjuna.

The World Bank pulling out could ­influence other international players like the Singapore consortium Ascen­das-Signbridge that have drawn up Amaravati’s master plan into taking a relook at their commitment. “Though we have not heard formally from the World Bank, the news about its ­withdrawal can have a negative effect on other international collaborators,” admitted an official of the Andhra Pradesh Capital Region Development Authority (APCRDA), nodal agency for the capital city project. 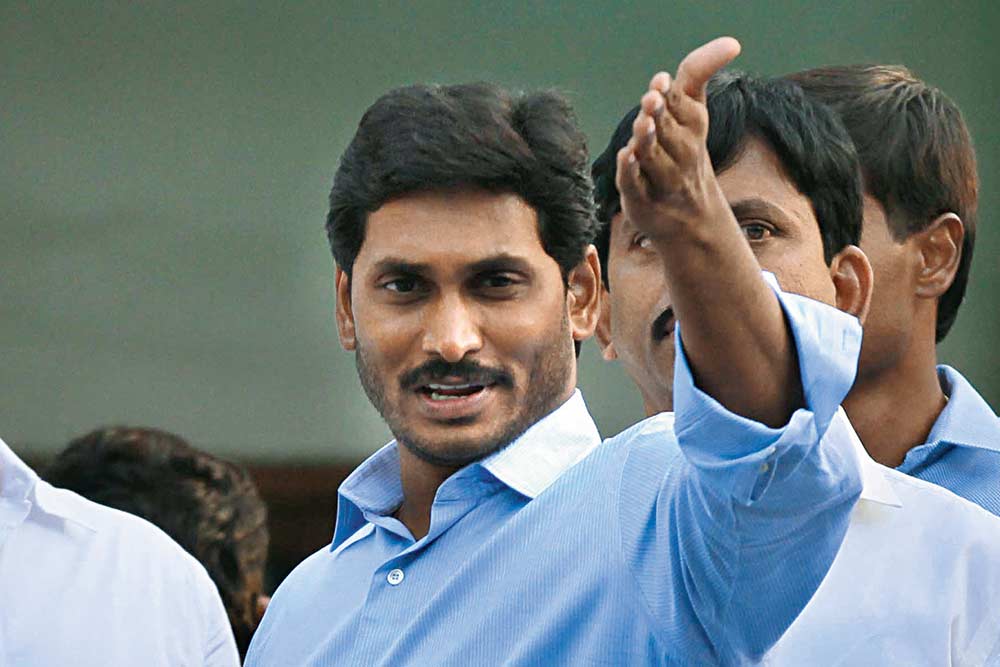 Photograph by Getty Images
With the city project in a limbo, villagers who gave up their farmlands don’t know when they’ll get possession of the plots they have been allotted.

No less apprehensive are Venkateswara and other farmers in and around Amaravati who gave up their farmlands for the project under the land pooling scheme floated by the Naidu government. The scheme envisages providing 200-square-yard commercial plots and 1,000-square-yard residential plots to them within 10 years. Every year until then, they would be paid Rs 50,000 per acre of ­cultivable land and Rs 30,000 for non-cultivable land. A total of 61,154 plots were allotted to 23,903 landowners in 22 villages. “But they only have provisional ownership and will get to occupy the plots only when the city gets completed along with the infrastructure. Now no one knows when that will happen,” points out M. Seshagiri Rao, president of the Capital Region Farmers Federation. “Initially, the farmers were promised plots within five years, but that looks remote considering the delays. Farmlands have been encro­ached upon by roads, buildings and construction material.”

It’s worse for the 11,000-odd tenant farmers who pay rent to landowners for cultivating chillies and other cash crops on their farmlands. The scheme has deprived many of them of lands to ­cultivate. Land rent has become steep following the rise in land prices due to the capital hype. “Where they used to rent a land for Rs 20,000 per acre, they now have to pay up to Rs 35,000,” says local activist U. Narasimha. “Since they do not own lands, they cannot take loans from banks and have to depend on moneylenders and get trapped in a ­vicious debt cycle. Many of these tenant farmers are Dalits and a few have ­committed suicide on being unable to pay their debts.”

Also viewing the unfolding drama with trepidation are the 3,000-odd workers employed by the contractors. When construction activity slowed down after the change of ­government, the contractors asked many of them to return to their homes in West Bengal, Odisha and Bihar. Since buildings where more than 25 per cent work had been completed were allowed to go ahead with construction, a sizable number remained in Amaravati. Even though bills have not been cleared, the contractors continue to pay wages, but are not sure how long this can go on. “We cannot keep dipping into our ­reserves to pay the wages when our bills remain unpaid for nearly six months. If we send back the workers, all activities would grind to a halt,” says a sub-­contractor for L&T.

So what is the stated position of the Jaganmohan Reddy government on the future of Amaravati? No one is sure. APCRDA commissioner P. Lakshmi Narasimham says the sub-committee headed by Andhra fin­ance minister Rajendranath Reddy was still seized of the matter. Rajen­dranath Reddy on his part says that once the committee submits its report, the CM would take the final call. And no one knows about Jagan Reddy’s thought process on this. He has maintained an intriguing silence on Amaravati even as his ministers had alleged insider trading in which those close to Naidu had benefitted.

The latest allegation pertains to Naidu’s brother-in-law, TDP MP and actor Nandamuri Balakrishna, buying more than 500 acres of land in Amaravati before it was identified as the capital region, thereby profiting from the subsequent announcement of the capital’s location. “Everything will come out in the sub-committee’s report and we will let the people judge,” says urban development minister Botsa Satyanarayana. APCRDA officials are hopeful that the government may finally come around to completing at least the core capital area comprising government offices and residential quarters for officials and judges. But, with only a paltry Rs 500 crore set aside in the budget, it looks like a diminishing possibility.