If social media is a rage, how can political parties be far behind? And when it's election time, propaganda rules the roost. Facebook ran all the way to the bank through paid advertisements from BJP and Congress 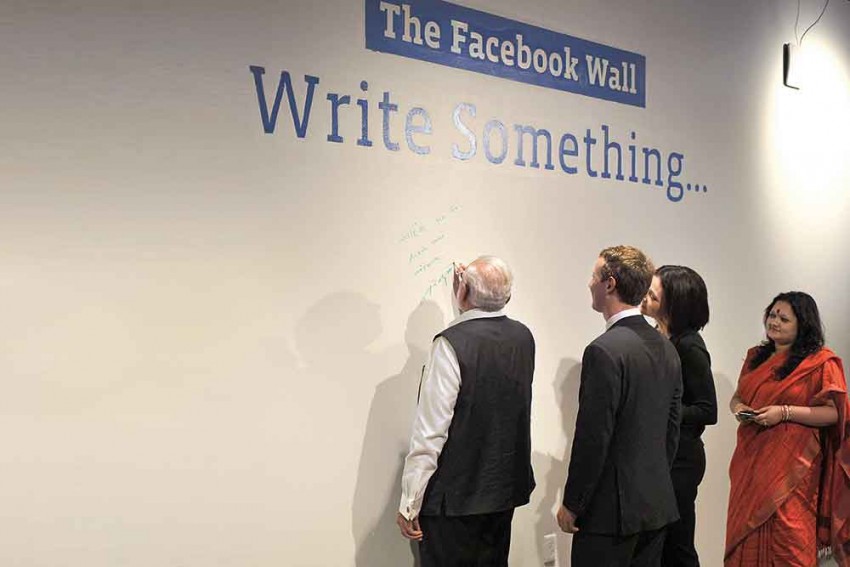 Siddhartha Mishra May 15, 2019 00:00 IST Like It Or Not, Big-Spending Political Parties Find New Playing Field In Facebook 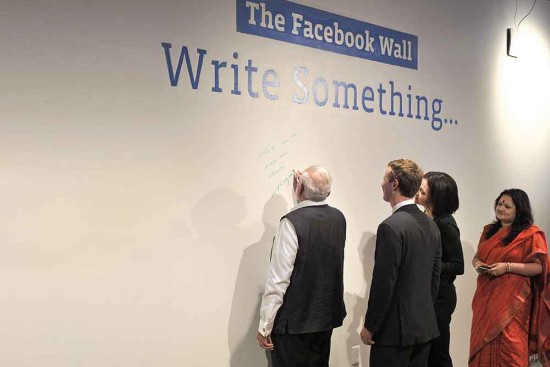 Social media has not reached a stage where it can swing Indian elections despite the fears of those consumed by it, but it has sur­ely emerged as an aggr­essiv­e space where political parties compete for outreach. And crucially, it is the only platform which offers a glimpse into how much money parties are spending during elections.   Patterns of how much money was spent on social media during the elections gives a fair idea of the hopes and desperations of political parties in play. Is the saffron giant just flexing its muscles or swinging wildly just to land a punch. Is the underdog res­ponding in the same coin?

Aside from a recent RTI by Pune-based activist Vihar Durve which found that election bonds worth Rs 3,622 crore were bought between March and April, there isn’t much to go by for data on election spending. Only a part of it has become visible of late, with social media giants putting out data. The figures here have undeniable significance:  Facebook is more and more a marketing (propaganda!) tool for political parties considering that 260 million Indians are on it, as of April, according to online surveyor Statista. 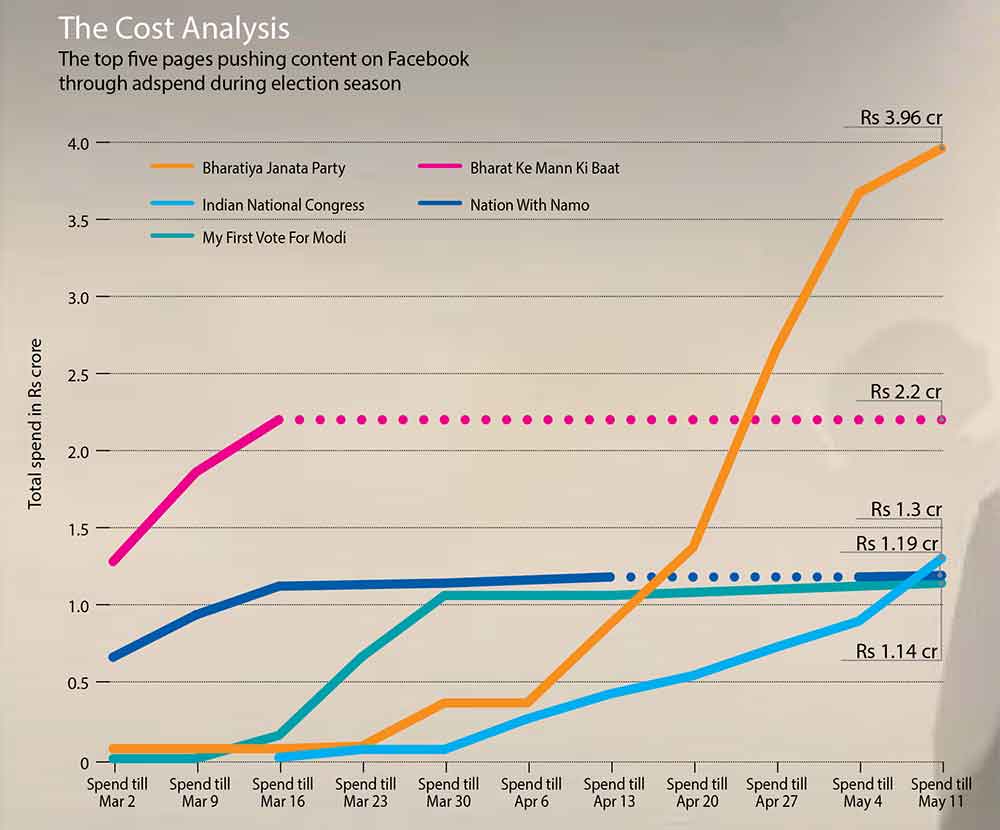 As per Facebook data for India until May 11, there are 31 pages that have spent over Rs 10 lakh each for advertisements on the platform. Of the top five spenders so far, three are BJP affiliates. The Cong­ress’s page is at number three (the party is still being outspent three to one by the BJP so far). The official BJP page has spent about Rs 3.96 crore till May 11 on 2,544 ads with the Congress’s page spending about Rs 1.32 crore for 3,525 ads and still getting outspent by the biggest BJP affiliate. Along with its three affiliates, the ruling party has spent a lot more than Rs 8.38 crore in the period.

Speaking of affiliates, the biggest spenders prior to polls were pages ­affiliated with the BJP. Prior to polls, the three top affiliates—Bharat Ke Mann Ki Baat, My First Vote For Modi and Nation With Namo—had been laying the ground with propaganda for what seems like carpet bombing later. Till March 2, the BJP had only spent about Rs 6.6 lakh on advertisements. 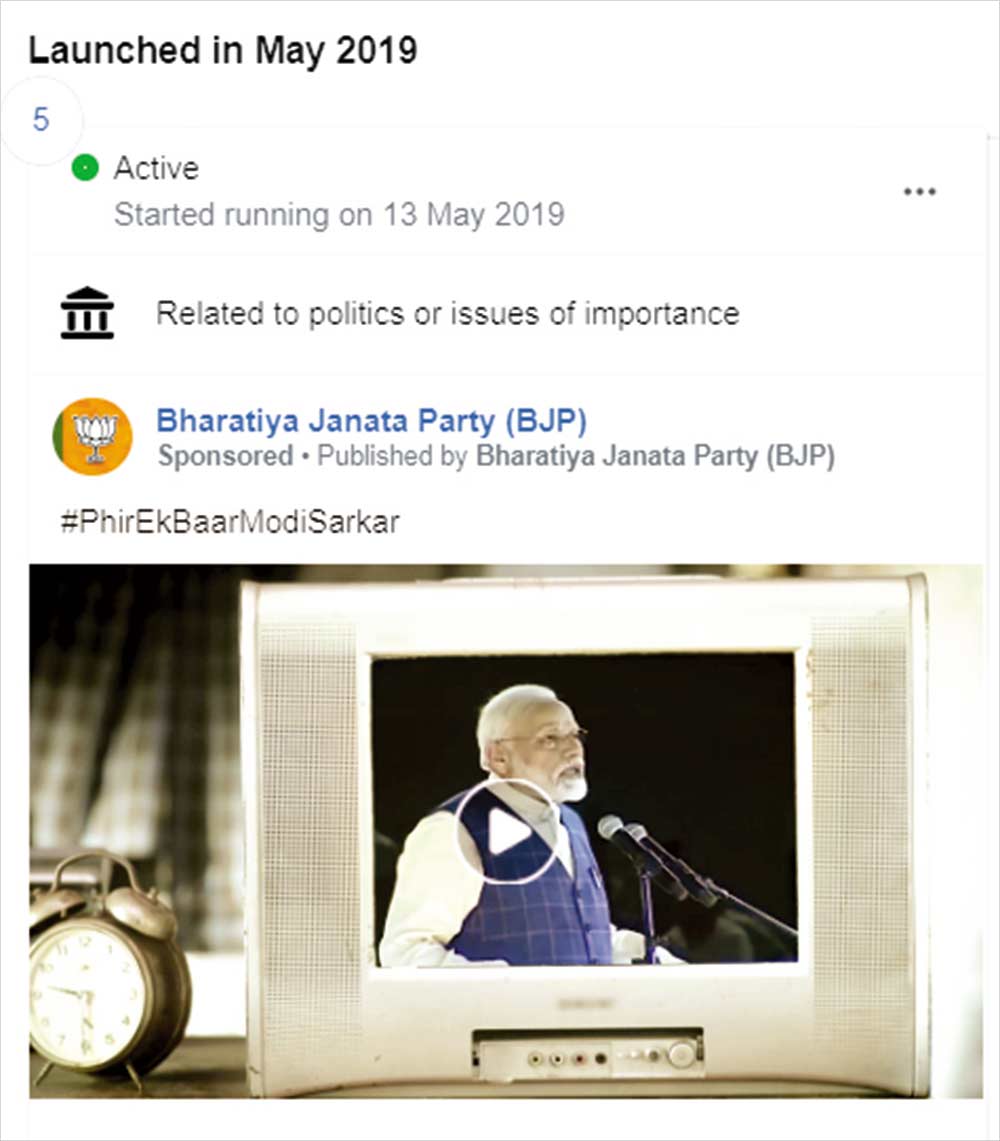 Once the polling began, on April 11, the BJP official page took over with an inc­reasing frequency. Sample this: On May 7, a day after the fifth phase of polling, the official page put out 551 paid advertisements on Facebook at the rate of about one every 2.6 minutes through the day. The same strategy had been repeated on April 19, a day after the second phase of elections when 514 ads were put out, most of them with #Phir­EkB­aarModiSarkar and #MyFir­stVote­ForModi hashtags. 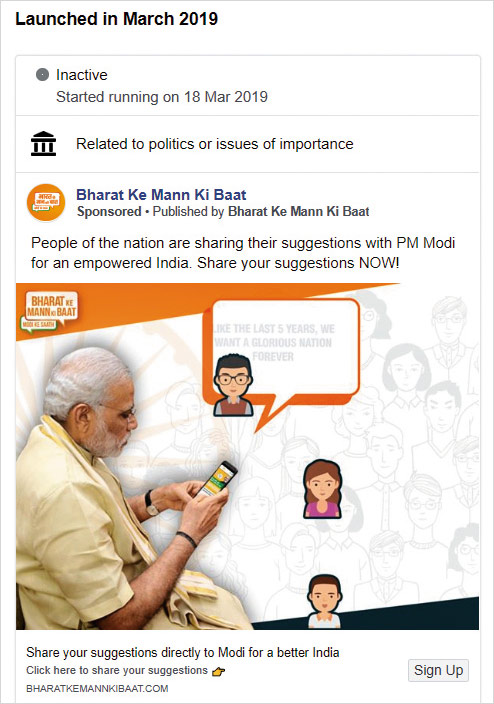 Was this advertisement bombardment a case of fraying nerves from poll estimates or a final outreach assault? The Congress would have hoped to sense the former though sources within the party choose to remain tight-lipped about the topic. Between May 4 and May 11, the grand old party outspent the BJP on Facebook, coughing up about Rs 40 lakh as opposed to the Rs 28 lakh spent by the ruling party; it was the first time this happened during the polls.

“In general, they’re (Congress) spending less because it has to be done in a co-ordinated manner. Bombard karna padta hai. You can’t run an entire campaign on ads so the sensible thing is to bombard people, however it may be working out politically,” Shivam Shankar Singh, political consultant and author tells Outlook. He mentions that parties have a designated spending for advertising and it just makes “more sense to do it in a concentrated way.”

Sources within the Congress believe the BJP is probably focusing spending offline since it doesn’t have “much of a chance” on social media. 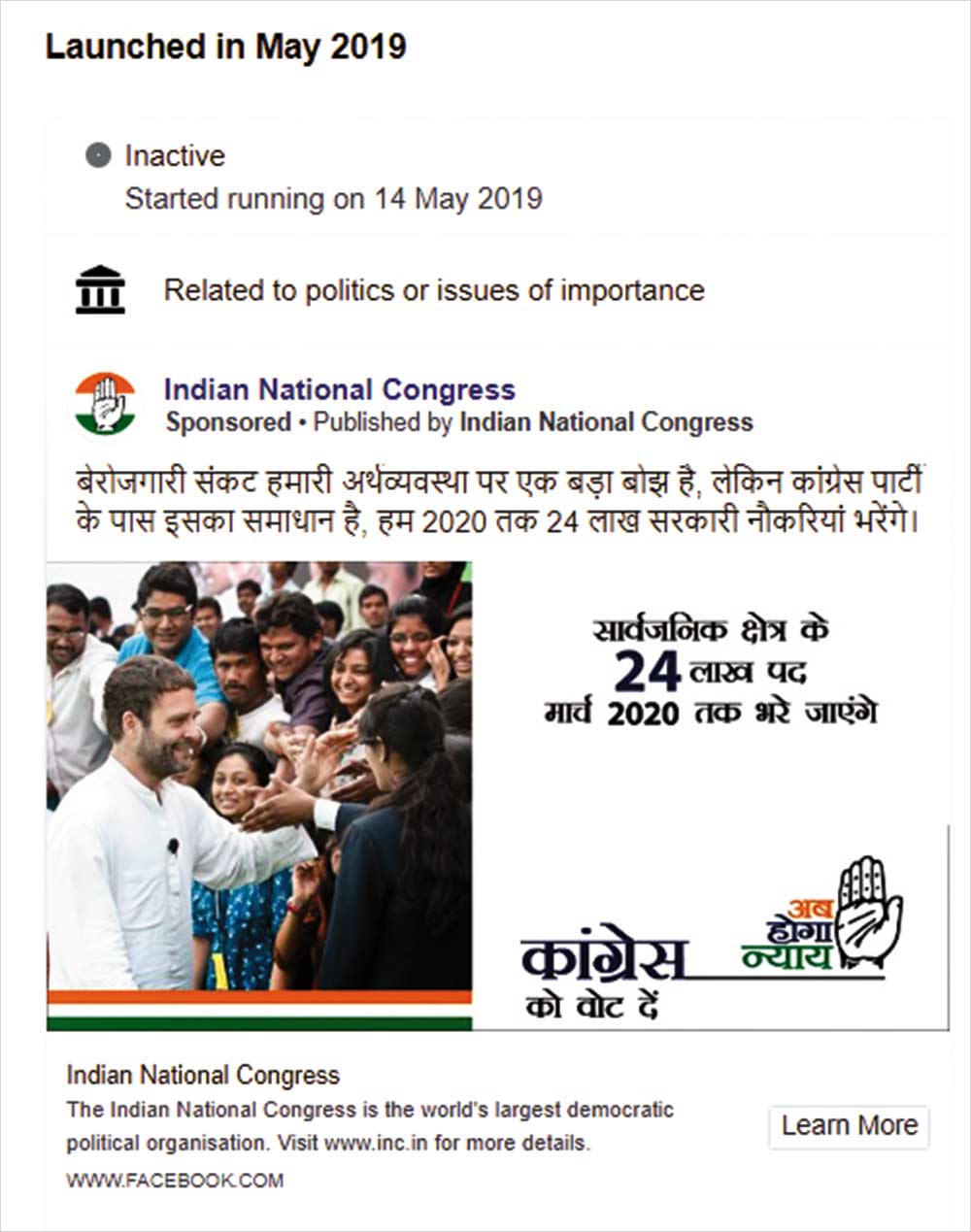 Jagdeep Chhokar, founder member and trustee at the Association for Democratic Reforms tells Outlook that election spending is a “huge mess which happens in a disguised way.” He says that spending will come mainly from close affiliates and the official pages but there are many others. “How do you account for that? Those which are clear are clear but I’m asking about the amb­iguous stuff and stuff put out to undermine opposition. How do we track that? There cannot be reliable estimates of social media. It only tells us a part of the spending, not the whole thing.”

It’s Facebook’s curious fate to have poli­tical commerce trumping private-pushed ads. The only exception this election season­—between April 24 and May 4—came from Flipkart, which,  with Rs 1.78, crore managed to outspend the Congress’s page. Tens of thousands of crores of rup­ees will apparently be spent by the end of this week on the elections. While social media spending may be a minuscule amount of that, the details can act as samples reflecting a bigger picture.