Cameras across Delhi are catching traffic rule violators unawares. VIPs and other important people are no longer able to bully past helpless police personnel. 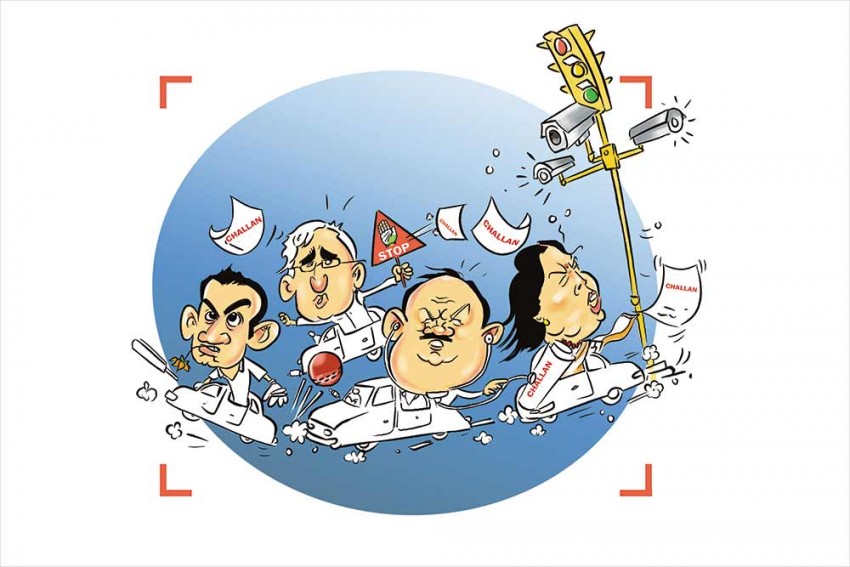 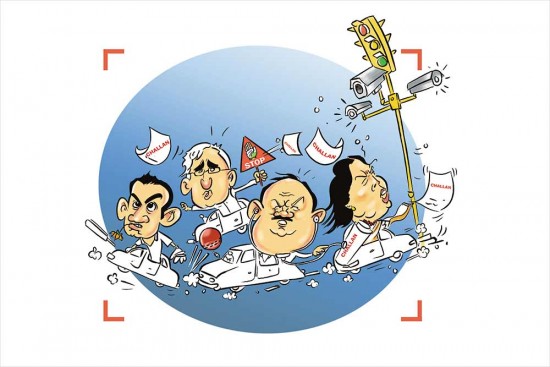 So you are despairing over the notices sent by the Delhi traffic police: red light jumping, improper parking, driving above the speed limit…And wondering where did you commit these offences? But worry not, you are in august company.  Among the thousands of people slapped traffic violation notices—‘challaned’ as you like to say in typically desi terminology—in Delhi in recent months are Union ministers and leaders from across the political spectrum. And one of the names is…yes, you read it right, Kanchan Gadkari, wife of Union transport minister Nit­i­n Gadkari, who was pivotal in amending traffic laws to make violations a costly affair. Congress leader Salman Khurshid has as many as 15 pending notices against one of the several vehicles registered in his name.

But a notice simply doesn’t imply that the vehicle was driven by the person in whose name it is registered—it could have been a driver or a family member. The moot point is about technology which has helped bridge the gap between commoners and VIPs. What a traffic policeman on duty may not have been able to do so far—challan vehicles bel­onging to ministers—has been acco­mplished by traffic cameras installed across the city. Whether the traffic police have enough teeth to go after the VIP offender to realise the fines or pursue a court case is another matter altogether. 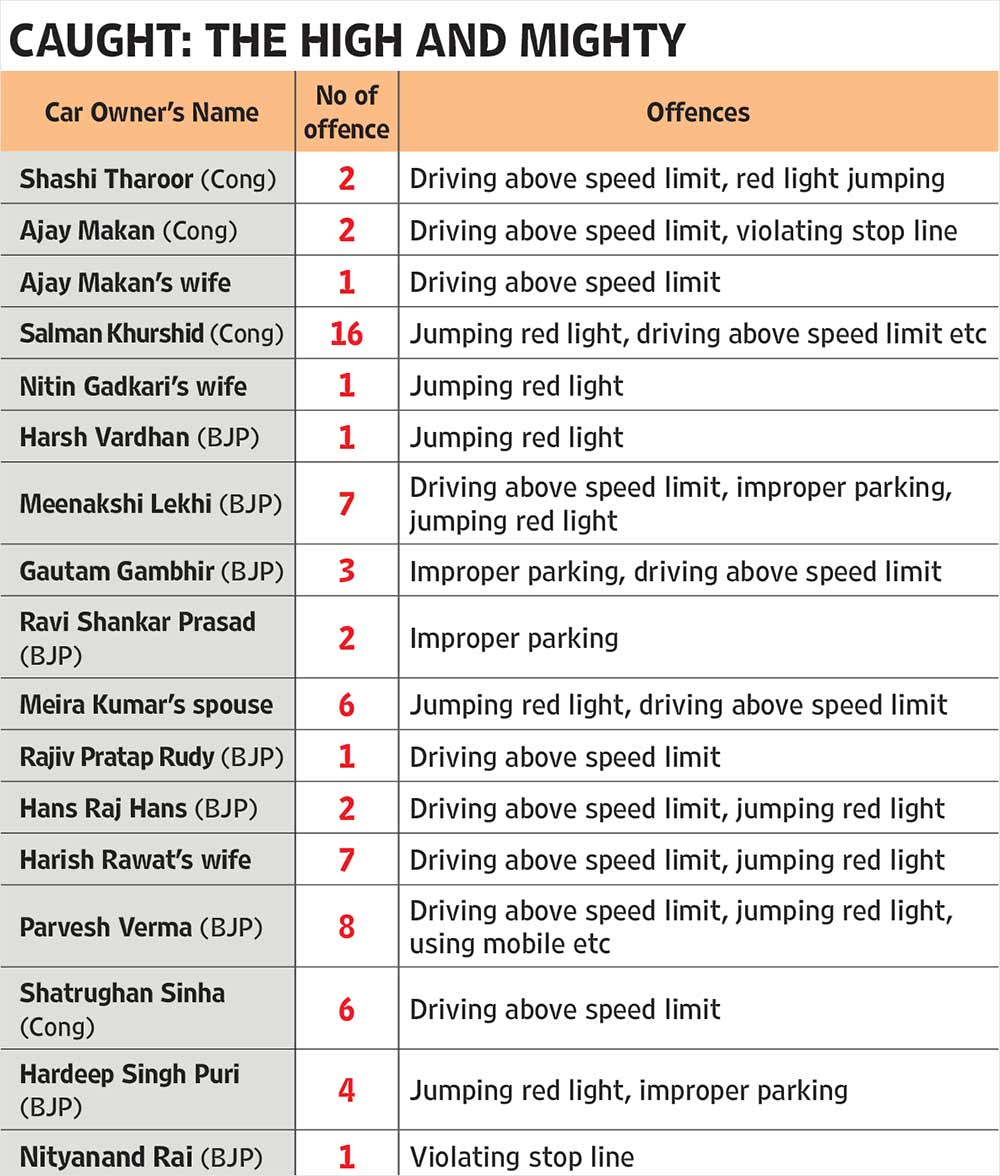 One of the jokes going around is about the kith and kin of influential people in Delhi—political leaders, page-three celebrities or wealthy businessmen—whose one-line answer to any arg­ument on the road is, “Jaanta nahin mera baap kaun hai” (Don’t you know who is my fat­her?­). Delhi traffic police personnel, especially those in the lower ranks, know it for a fact. And in some cases, it does not even take the father’s name to have the desired effect. “Just a few days ago, I stopped a car as it had jumped the red light. The driver of the vehicle, which apparently belonged to an influential MP, threatened me that imposing a fine will attract dire consequences,” says a traffic pol­ice constable who was on duty at one of the traffic crossings in South Delhi. He did not want to be named for obvious reasons. “It is very difficult to impose fine on these vehicles as their drivers not only throw their weight around but often threaten to get us suspended if we challan (them),” he adds. But the cameras installed at select places, mostly crossroads, have made their job easier (see chart).

Delhi has 25 cameras for detecting speed limit violations and100 more are being installed. Red light violation is monitored by 10 cameras. This number will also increase to 34 shortly. These are part of efforts to streamline traffic management in Delhi, a city with one of the highest vehicle density in the world. Along with the amended motor vehicles act, which imposes stiff penalties for major violations, the measures are expected to make Delhi’s roads safer. “After issuing a not­ice for a traffic violation, the Delhi traffic department gives time to the owner of the vehicle to pay the fine. If the owner wants to contest the fine in a court of law, he or she can ignore the notice and wait for the matter to be listed in court,” says Rani Chhabra, a Supreme Court lawyer who deals in automobile-related cases. “The court can waive off the fine if it is wrongly imposed, but in no case it can increase it beyond what has been prescribed in the MV act,” she adds.

Outlook has accessed dozens of notices issued to cabinet ministers or their spouses, members of Parliament and political leaders of different parties—BJP, Congress and Aam Aadmi Party (AAP)—for various traffic violations. Cameras have captured these vehicles or drivers to have violated several traffic norms like talking on the phone while driving or driving over the speed  limit.

One of the vehicles of veteran Congress leader Salman Khurshid, a Toyota Fortuner, has 15 cases of traffic violation between April 2018 and August 2019, fines for which are pending till Outlook checked on  October 22. In fact, five of them have gone to court for non-payment within the stipulated time limit. Outlook first obtained the affidavits of these leaders which they had filed with the Election Commission along with their nomination to contest the 2019 general elections. Along with their assets and other details, they also have to dec­lare the number of cars they or their spouses own with their registration numbers, year of make and price. When these vehicles’ registration numbers are fed into the Delhi traffic police website, their traffic fine status and notices are displayed with an image of the car. Several top leaders like PM Narendra Modi, Congress’s Sonia Gandhi and Rahul Gandhi and defence minister Rajnath Singh don’t own any vehicle, as per their affidavits. 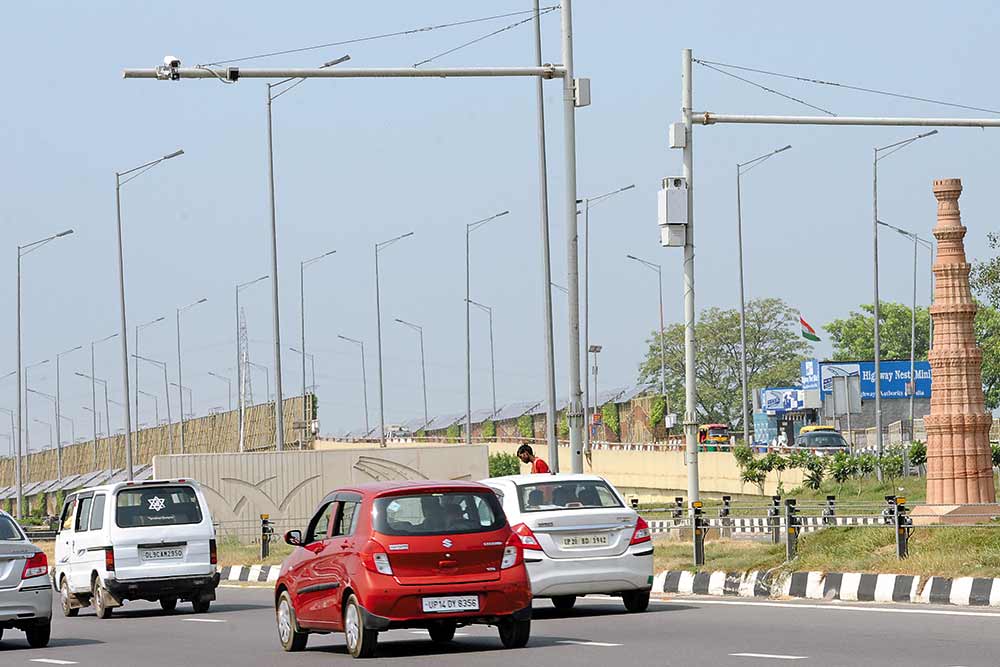 Nitin Gadkari and his wife own six cars, all registered in Maharashtra. The one which has been challaned, a Toyota Innova, seems to be in use in Delhi. Cricketer-turned-politician Gautam Gam­bhir owns five cars and a bike­, of which three have been gifted by Maruti, Mahindra and  Mahindra, and Bajaj Auto, according to his affidavit. Two of his cars have faced traffic fines for improper parking and driving over the speed limit, as per the Delhi Police website. Former Lok Sabha Speaker Meira Kumar declared two cars in her husband’s name, both of which have been fined five times for either red light jumping or driving in speed excess of the limit.

Singer-turned-politician Hans Raj Hans, whose vehicle has been fined for breaching the speed limit and jumping the red light, was unaware of the pending notices when Outlook spoke to him. “Though I always try to obey the traffic rules yet my driver might have committed these offences when he was driving the car alone. I will try and educate him,” Hans says.

A large number of people, and not only VIPs, are unaware of traffic notices slapped on them as they have not received text messages sent by police. Police say this can happen if the owner’s phone number is not registered with them or they switched to a differnt number. Narendra Singh Bundela, joint commissioner (traffic), says all notices are on the basis of camera-based data and there are no biases. “We try to be transparent. Also, the technology that we have in place is quite robust with minimum chances of error…But if there is an error and it is brought to our notice, we review it.”

Technology has bridged the gap between VIPs and the common man in a city where might is right.

Many traffic experts say VIPs, MPs and ministers don’t drive but their drivers often end up violating traffic norms as they think that nothing can happen to them as the vehicle owner is a powerful person. “I think VIPs and VVIPs should counsel, educate and instruct their drivers to follow traffic rules and take them to task for driving in an err­atic manner and causing inconvenience on the road. There is no excuse for breaking the  law,” says S. Sathyapal, former chief traffic warden, Bangalore City traffic police. He insists, though, that his “experience of working with VIPs suggests that, generally, they abide by the law in letter and spirit”, and quickly adds that they are prone to mistakes as they are human too.

Former Uttarakhand chief minister and Congress leader Harish Rawat, however, blames the traffic management system for the challan mess. Two vehicles in the name of Rawat’s wife have been fined seven times, as per the pending notice status on the Delhi traffic police website. “I request the authorities to make the traffic system more practical. A speed limit of 50 kmph has been imposed at several places on the nat­ional highway. Isn’t it impractical?” he questions. “Earlier, at many traffic signals in Delhi, the yellow light used to flash before the green or red, cautioning people to slow down or stop. That has been removed. I think it should be brought back everywhere?” On the pending not­ices, he says since his family members also drive the vehicles, “these violations might have happened…when you are driving, despite all precautions, violations do occur”.

Rawat’s party colleague Jaiveer Shergil has a practical approach to the road rules. “Technology is ensuring the law treats everyone equally when it comes to monitoring and imposing fines.” This optimism might have to do with the fact that he is yet to receive any notice for traffic violation.

As a postscript we add that the Outlook Editor-in-Chief’s official vehicle, driven by a driver on company rolls, has drawn five notices. The fines for four have been paid, while one is in court. And the pending notices came to light only when we were trying to get a grip on the story.