Working from home, or from office—how’s your workplace and your work adapting to the new Covid-churned ecosystem? Here is a special survey by Outlook-Toluna 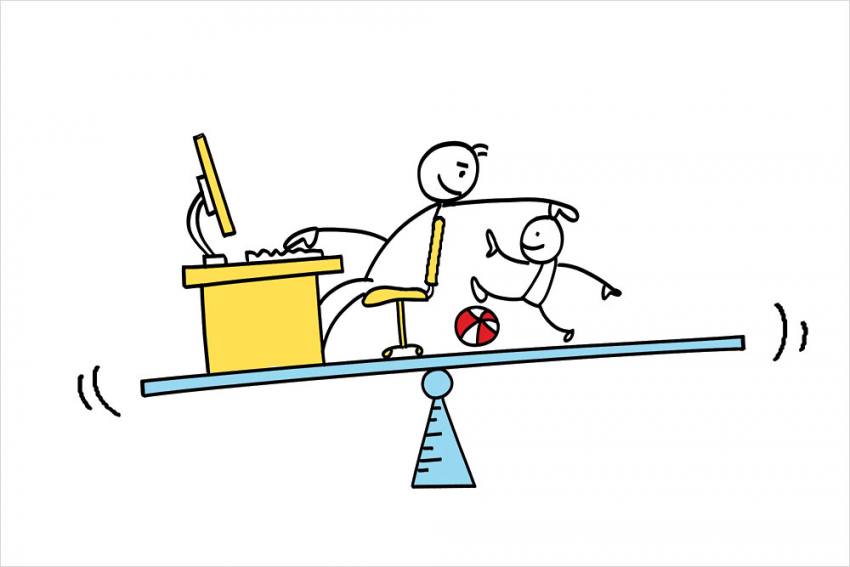 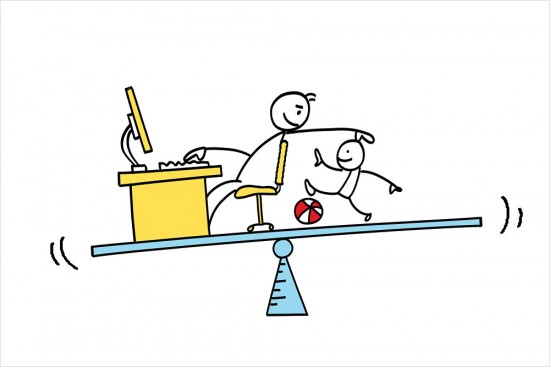 It took me 90 days to muster courage to make the first visit to the office. For three months, I locked myself at home, working in sequestered comfort. Or discomfort, as some would say. The only excursions included the weekly trips, on and off, to the nearest paan shop 20 metres away. To be frank, it wasn’t guts, but fear, which forced the decision. One set of fear—about the safety and health of my ageing mother—had kept me confined. Now, another set of dread—the one we still feel with trepidation—made me go to office. It’s that dark anxiety of losing one’s job. Masked with an N95—the New Yorker said those were used by the medical staff in the US—I reached the magazine’s headquarters.

Like everyone, who has been to office or hoped to go after the lockdown, I expec­ted the obvious changes, but was ready for the startling ones. My mind was in a twirl—hopeful and pessimistic, brooding and excited.

It’s a good time to check the mood of the workplace. And so, Outlook teamed up with Toluna—an ITWP  company and leading consumer intelligence platform that delivers insights on demand— for a survey among white-collar workers across India, the most definitive one on the post-Covid situation. The country’s first employee study of its kind succinctly captures the post-Covid socio-business changes in office spaces, and reveals that there is no over-encompassing feeling of gloom-and-doom. Despite the crushing impact on the economy and businesses, employees can still see the positives. Their lives have changed, but it may be for the better to some extent.

ALSO READ: How Businesses Are Re-inventing The Wheel In A Post-Covid World

People are scared about future job losses, salary cuts, and huge declines in corporate earnings. They feel social-distancing norms will make them lose office friends as they become nervous about colleagues. But they are also buoyant and confident. They think they will be more productive, offices will become more professional, and a cure for the virus will be found in the next six months. The majority contends that the situation will improve within a month.

Despite the millions of pink slips and across-the-board salary slashes of up to 50 per cent, every surviving employee, including the top bosses, in every office is still apprehensive. For them, today can be the last day in office. As the survey shows, 56 per cent of the respondents are still scared of losing their jobs. An overwhelming 72 per cent say they are “still worried” about remuneration cuts. A higher percentage (76 per cent) believes there will be no appraisals, and no increments, possibly until March 2022. 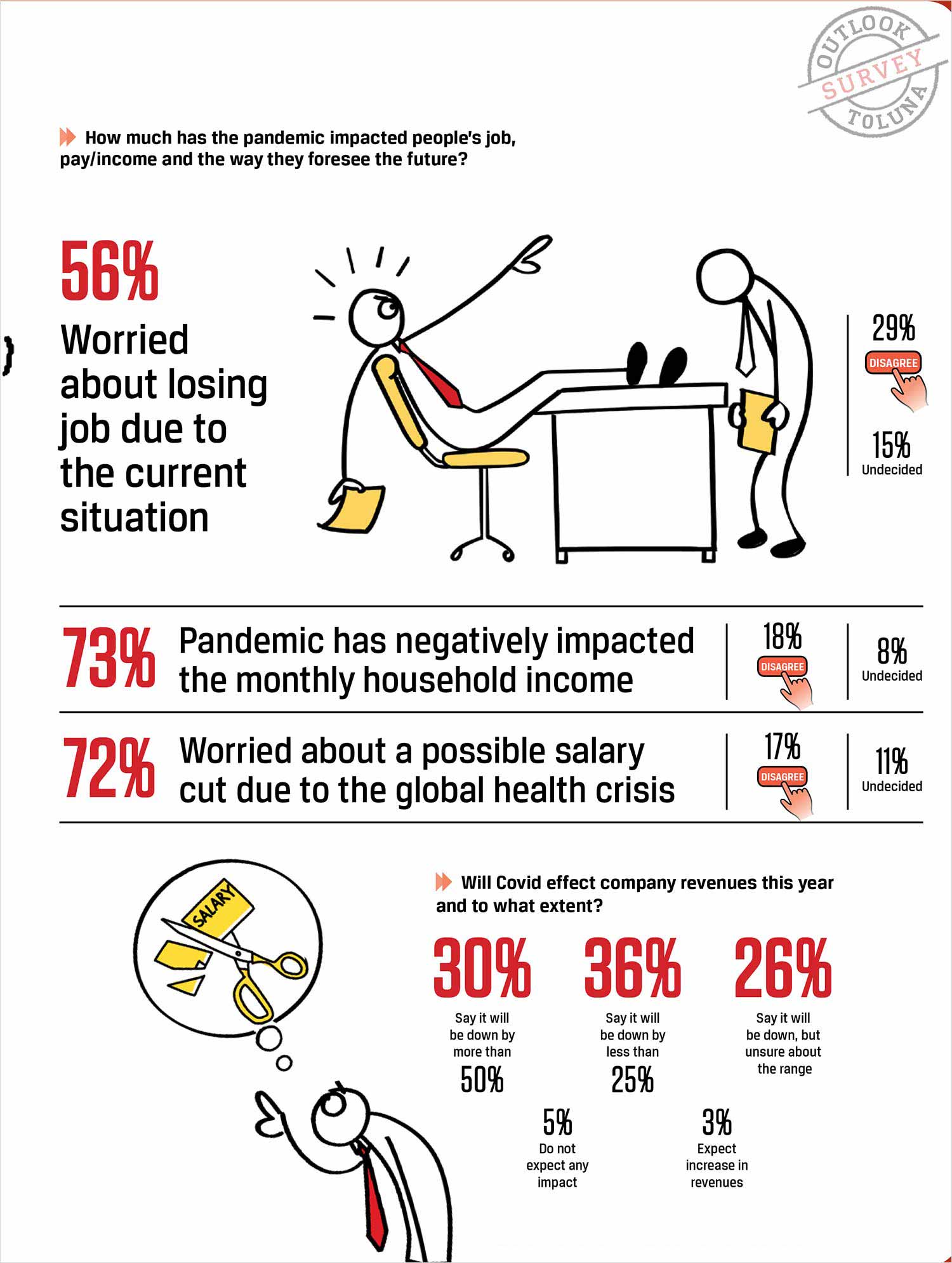 The reasons for such a hopeless mindset are clear. Most businesses are decimated, or are on the verge of bankruptcy. Despite Unlock 1 and 2 in India, several sectors may take at least three years to recover to their past levels of financial performances. Employees realise this, and 92 per cent of the respondents are sure that their firm’s revenues will be down in 2020-21. Almost a third (30 per cent) envisages a drop of more than 50 per cent. For 49 per cent of them, it may take more than six months—13 per cent claim more than a year—for their company “to get back to business as usual”.

What is unusual is that employees aren’t clear whether the cost-cutting measures were imperative. Even though businesses have suffered, there is a sense that owners and management could have avoided the sackings, and survive without them in the future. Half of the respondents say their companies are “using the COVID-19 crisis to fire people and cut salaries”. According to them, it is an excuse for the bosses to get rid of the deadwood, unsavoury elements, and those who were the causes of regular office-related problems. 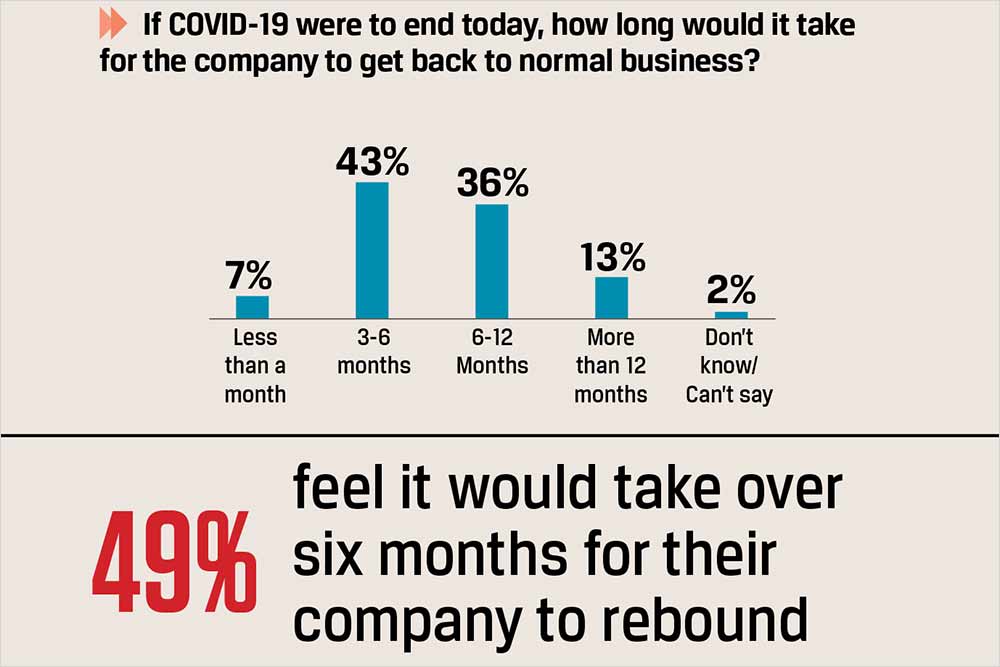 However, there is a positive edge to this bleak scenario. Employees surviving this mayhem, and retaining their jobs, may benefit. Four-fifths of the respondents categorically state that they will become more productive, as they will “focus more on work”, rather than indulge in office gossip and banter. As social and personal interactions come down, and there are pressures to meet targets and show results, offices may become more professional, say 78 per cent of the respondents. 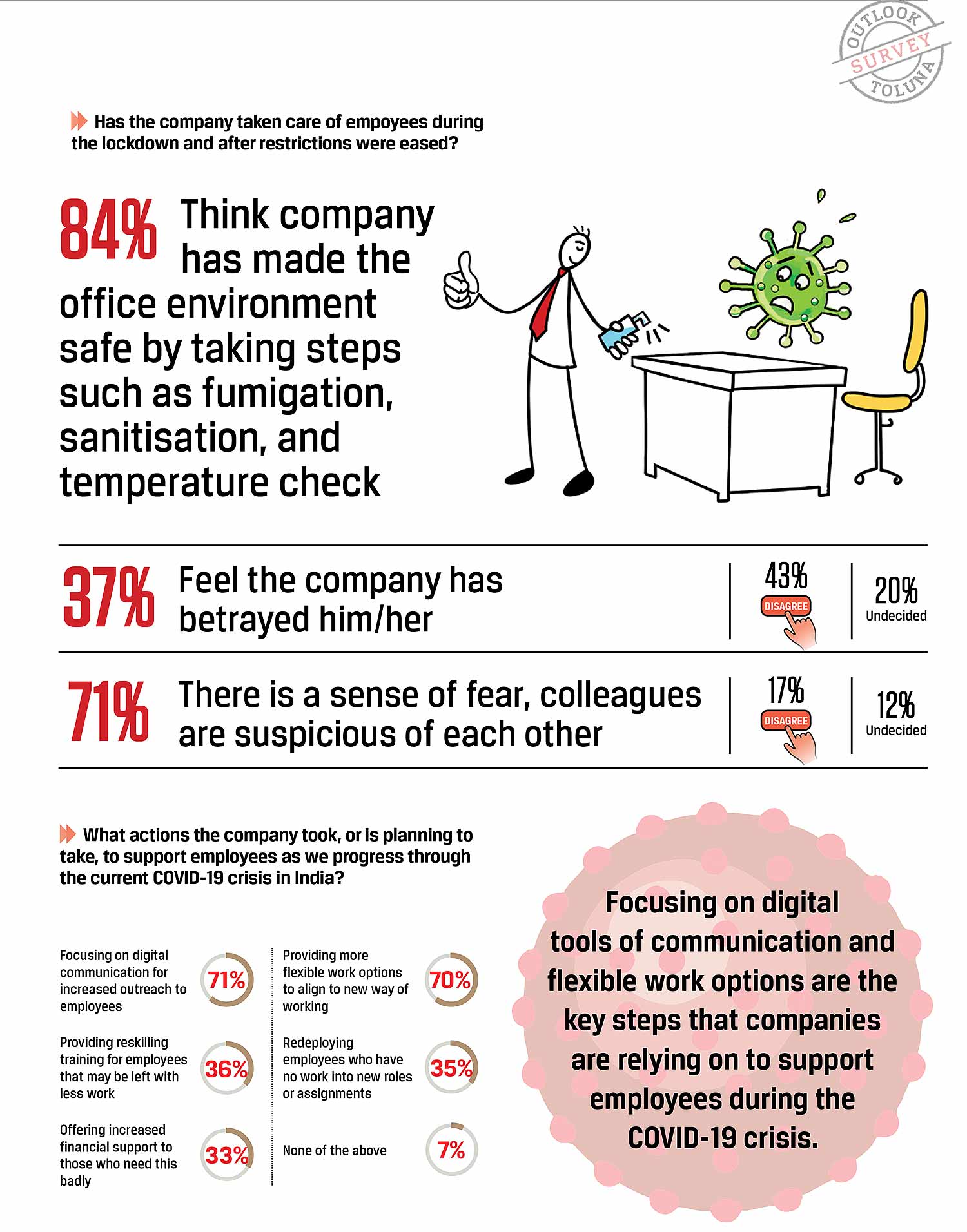 After the visit for the urgent meeting at office, I noticed the alterations in my work style. I was saddled with more work, as the number of people in the office declined.

I became more prompt, and tightened my internally-set deadlines. Surprisingly, I sought work so that I don’t vanish from the radar of my boss. It was the same with everyone; there was a push factor among the colleagues to deliver more. The desires may be laced with panic, but it may lead to quantitative and qualitative changes. 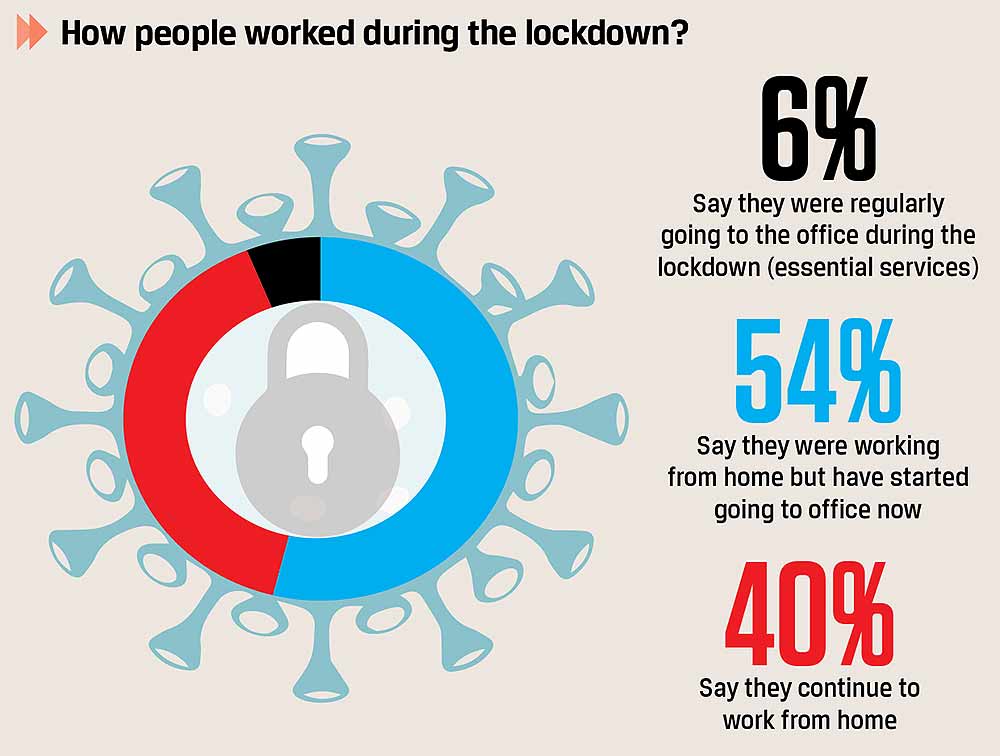 One of the factors that may concretise these trends in the near future will be the management’s attitude towards emplo­yees’ presence in offices. Most may allow 40-60 per cent to come to offices and the others to either work from home or work from anywhere (cafes, friends’ houses, and business centres). In this context, the efficiencies of the WFH workers will be crucial. If the consultancy option takes off, and more people feel satisfied and comfortable about it, productivity norms may be redefined.

During my conversations with friends recently, most seemed troubled by the WFH culture. Some felt bored and lonely, and decided to gather at someone’s house to work in small groups. Others said they had to work more, even on weekends. There were constrictions of being at home, especially for the majority who worked in media. Since the children and husband were at home, it was difficult to focus on work. Not many seemed enthused.

Surprisingly, the Outlook-Toluna Survey to understand the impact of COVID-19 on employee sentiments wasn’t so emphatic. It is true that 57 per cent admitted they had to work more hours from home, and 50 per cent say they felt “lonely and isolated”. However, 79 per cent loved WFH a lot, or loved it a bit. Nearly half of the respondents claim the most important benefit was “flexible working, i.e. anytime, anywhere”. More than a third say they spent more time with their family. 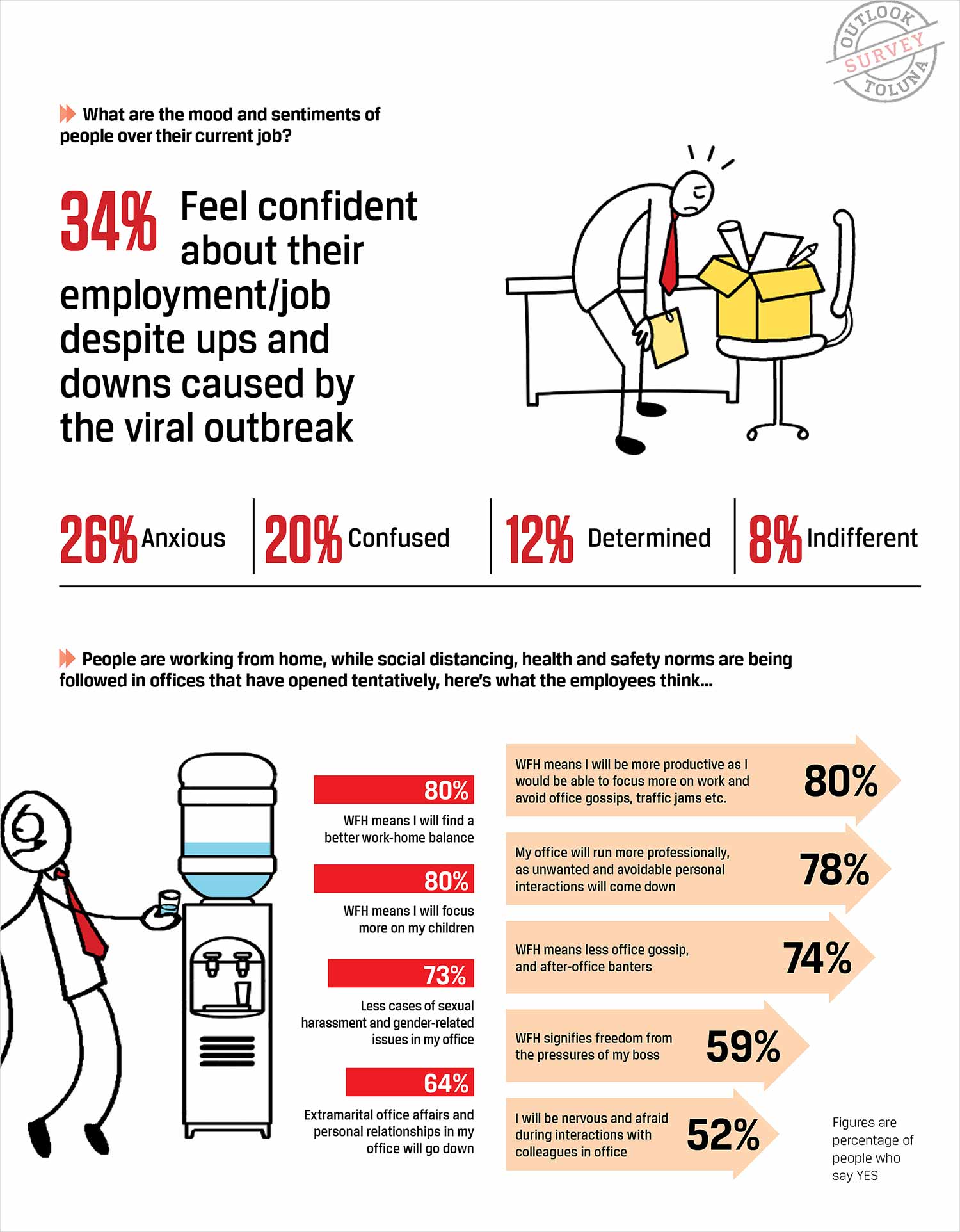 More than half of the respondents claim that they were more productive when they worked from home. As was expected—though it is not usually articulated—60 per cent contend that it was a relief, and signified “freedom from the pressures of my boss”. A combination of the impetus to WFH or WFA (work from anywhere) culture, and stricter social-distancing norms in offices, will lead to “better work-home balance” and help people to “focus more on children”, add 80 per cent of the respondents in each case.

One can safely assume that such observations, which are related to the temporary and forced WFH scenario, may change as this work culture becomes the norm for a sizeable number of employees. The attitudes and feelings may be different in the future. The same will be true about the employees who do go to offices. Their relationships with their bosses and colleagues will witness severe adjustments. For various reasons, professional interactions may not be the same. 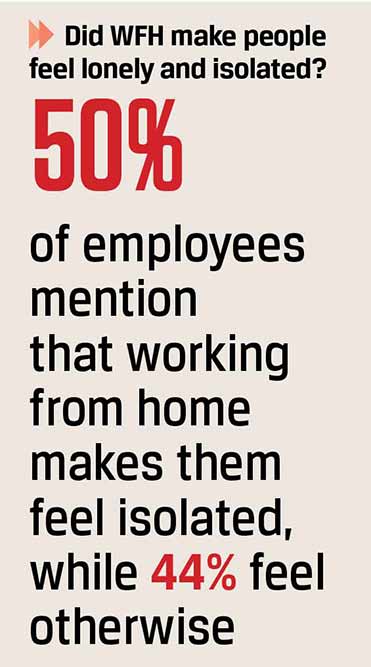 I noticed this on my first visit to the office. My first reaction was to search for an isolated post, away from the others. Initially, I took refuge in the first-floor conference room, and realised that people still hovered in the vicinity. I shifted to the design section that was more secluded. Finally, when my editor turned up 10 minutes before the meeting, he suggested that we shift to the second floor. “It will be empty, and we will be able to maintain social-distancing in a better fashion,” he said.

Over the next few months, there will be a tendency to shun colleagues, unless necessary, and stay away from them. This reflects in the survey. More than half of the respondents contend that they will be “more nervous to interact” with colleagues, and a similar percentage predict that they will “lose office friends” due to both WFH and social distancing in office spaces. Worse, 71 per cent admit that there is a “sense of fear” in offices, and people are “suspicious” of each other.

Such a combustible emotional mixture can lead to several personal and social constraints. Feminists (including males who think the same way) and the sup­porters of the #MeToo campaign will be thrilled to know that 73 per cent feel the cases of sexual harassment in the offices will come down. Almost two-thirds contend that the same will happen in the case of office-related extramarital affairs. The professional will become more important than the personal in the work environment.

Clearly, the employees’ sentiments about their current spaces are mixed, a few good and bad, and some ugly. However, the overall feelings veer towards the middle point. For example, the current mood of a large proportion of respondents (46 per cent) is either confident or determined, and the same percentage feels confused and anxious. Just less than a third (30 per cent) is “very optimistic” about their work lives in the next six months, and another 36 per cent is “somewhat optimistic”. The two combined say that “life will be the same as it was before COVID-19”. 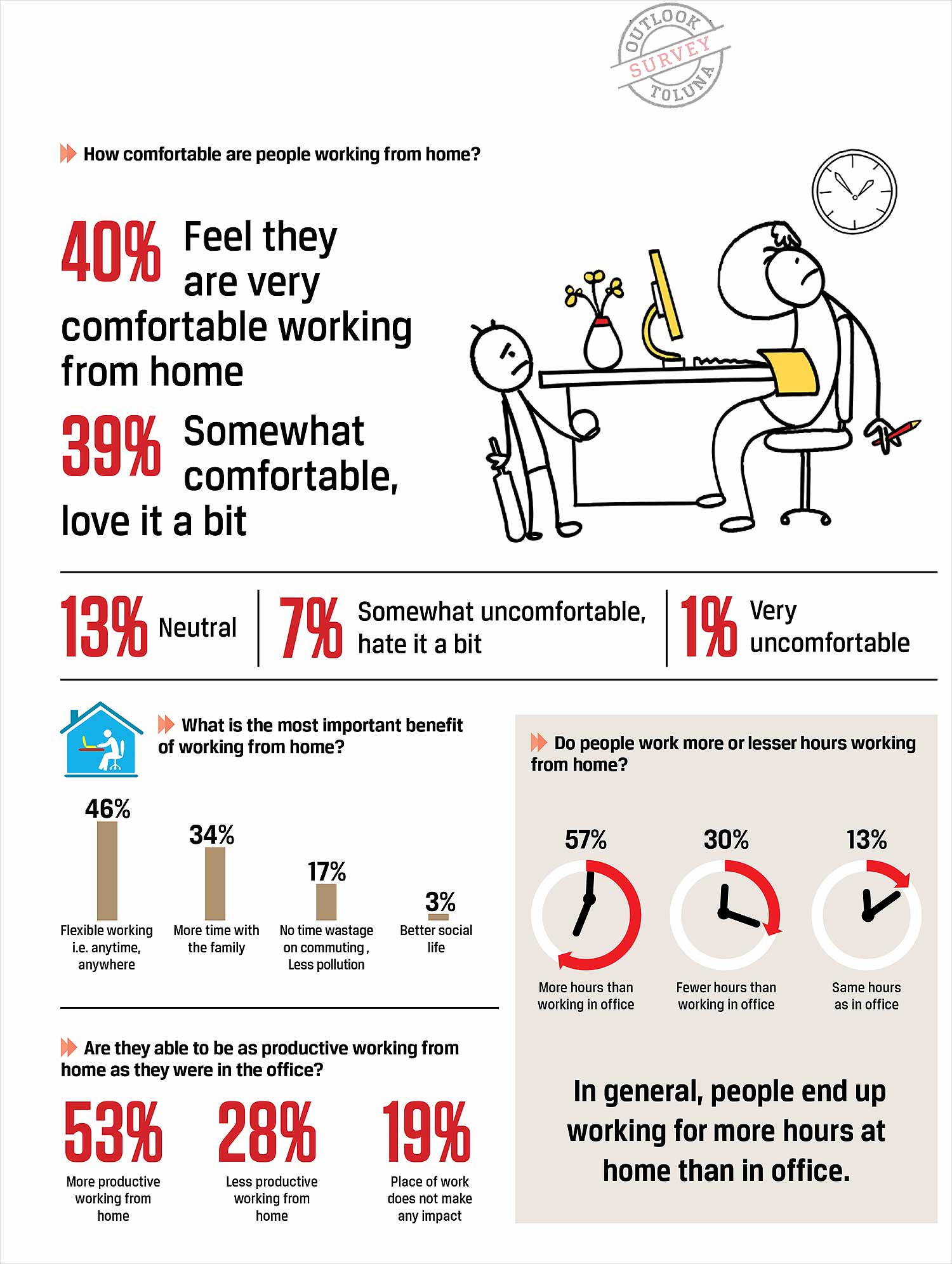 As expected, the hopefulness is higher among those in the 35-55 year bracket, compared to the 25-34 age-group. The reason is logical. Those who have reached a certain professional level, think they can combat the adverse impact of the crisis better than their younger counterparts. The employees in firms with 250-1,000 people are more sanguine, compared to those in the smaller (less than 250) and larger (more than 1,000) ones. Yet again, the reason is obvious. Unlike the latter two categories, the mid-size ones have higher growth potential.

The overall cheerfulness is possibly due to an underlying belief that the health crisis is temporary, and will not last beyond this year. This is because 79 per cent agree the world will find a cure for COVID-19 within the next six months, i.e. by the end of 2020. In fact, 58 per cent say India’s overall social, health, and economic situation will improve—either a lot or a little bit—by the end of July 2020. If the pandemic doesn’t exist in its severe form, there is no reason for a pandemonium.

How Survey was conducted